Allen Park family of six drops everything for Jesus, moves overseas as missionaries 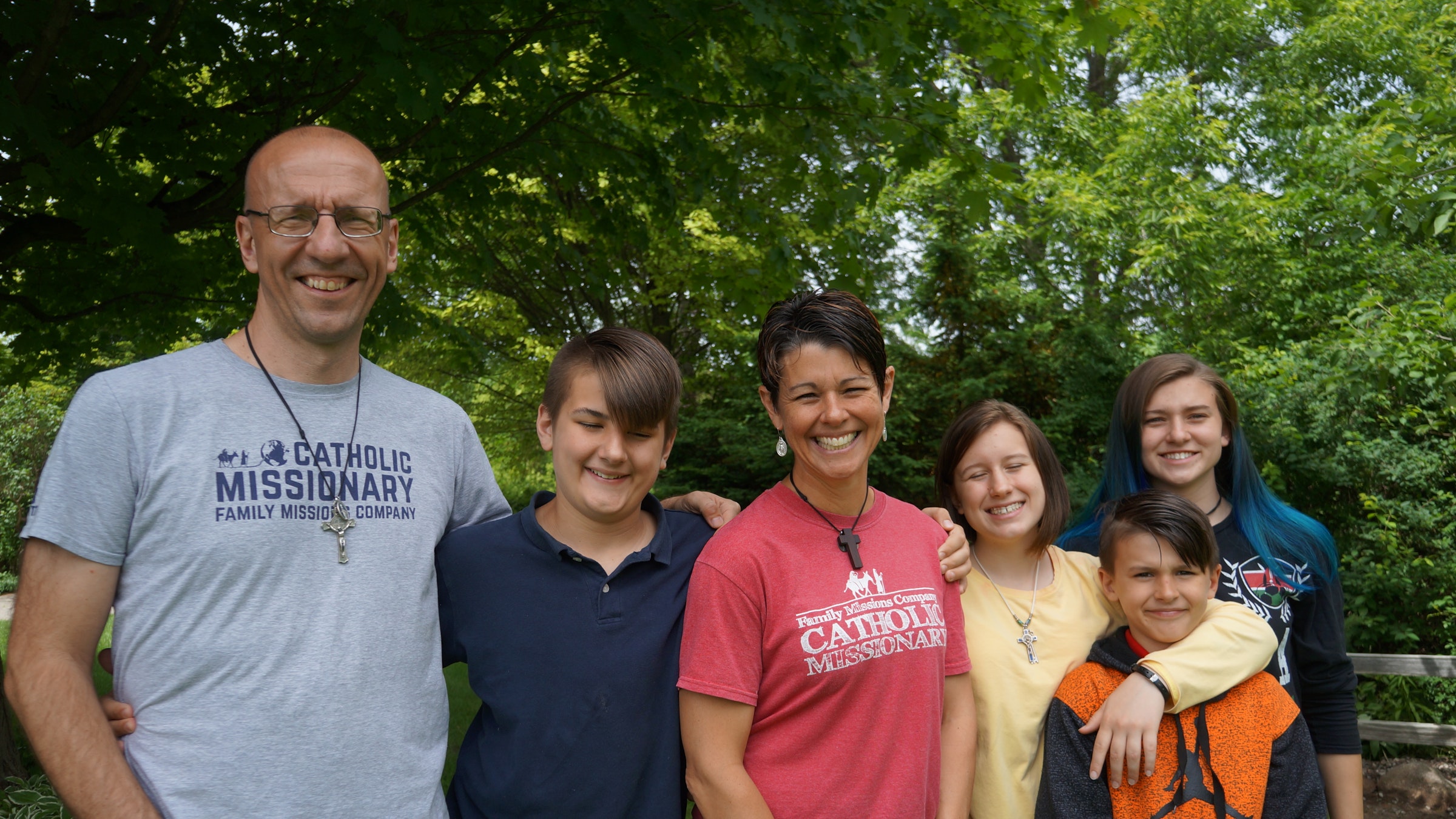 The Carmody family of St. Frances Cabrini Parish in Allen Park — from left, dad Chris; Jack, 12; mom Karen; Anna, 13; Michael, 9, and Katelyn, 15 — pose during a brief stop in Michigan in between overseas missions. The family has spent the last three years as missionaries in the Diocese of Moyobamba, Peru, and is now headed to serve in Mikinduri, Kenya. (Janet Sugameli Biondo | Special to Detroit Catholic)

ORTONVILLE — Being a missionary family isn’t just about spreading the Gospel; for one local family, it’s about living it out in front of those who have never seen it across the globe.

More than four years ago, the Carmody family of Allen Park were moved by the Holy Spirit to make the life-changing decision to leave the comfortable life they had, selling their possessions to become missionaries.

The family of six — parents Chris and Karen, along with their children, Katelyn, 15, Anna, 13, Jack, 12 and Michael, 9 — with the help of Louisiana-based Family Missions Company, were stationed in a village in the Diocese of Moyobamba, Peru, for the past three years. Now, they are headed to another three-year mission in Mikinduri, Kenya, where they will continue their journey.

The Carmody family spoke to Detroit Catholic in between missions, while they were stopped at a relative’s home in Ortonville to refresh and wait for the Holy Spirit's direction.

“We had a normal Metro Detroit kind of life,” explained Chris Carmody, who formerly worked in the automotive industry. Both he and his wife have master’s degrees from the University of Detroit Mercy, where they met.

As a family, the Carmodys had been active parishioners at St. Frances Cabrini Parish in Allen Park, where Karen and the children, who were homeschooled, started a garden and helped distribute food for the poor.

Reflecting on that time, Karen said she can see the Lord preparing the family for what was to come.

Though the family had achieved what many consider the American dream, it wasn’t quite as fulfilling as they had hoped. It was about that time when Karen was reading a book that challenged the family “not to be lukewarm” and to step out of their comfort zone.

“We did not ever plan on being missionaries,” Karen said. “But the Lord was asking us to be radical to live our faith.”

After some Google searching, the family stumbled upon the Family Missions Company, a nonprofit ministry that sends Catholic families to remote places to serve as missionaries, proclaiming Christ to people around the globe.

“We didn’t know Catholic families could be missionaries,” Chris said, adding he took the idea with him to adoration and felt a tremendous peace. “It felt holy and it was attractive. This is what we wanted to be around.”

Karen said the family was inspired by Archbishop Allen H. Vigneron's pastoral letter, Unleash the Gospel, which challenges families to live as radical witnesses. While not every family is called to sell their possessions and move overseas for the Gospel, Karen acknowledged, evangelization looks different for everyone.

“We felt the joy to witness to people what is in Unleash the Gospel,” Karen continued. “We preach the Gospel and serve the poor.”

As missionaries, the Carmodys are involved in both corporal and spiritual works of mercy, a modern-day continuation of the Acts of the Apostles, Chris said, fulfilling the needs of those around them on a given day.

And the needs are many.

Some remote villages in the Picota district of Peru only see a priest once a month, Chris said; on those days, it's an all-day affair for everyone in the village and surrounding areas, with Mass, confessions, baptisms, first Communions, weddings and confirmations.

During the weeks in between, the Carmodys work with villagers to prepare people for their sacraments, with Chris serving as an extraordinary minister of holy Communion, with permission from the local bishop.

In addition to their other roles, the family tends to the physical needs of those around them, such as helping to build and renovate churches and homes or gathering wheelchairs for those who are immobile from birth defects or diabetes. Twice a month, they travel into the jungle to make dinner for 85 people at an orphanage.

Karen said the bishop told the family, “I want you to be an authentic example of a Catholic family, so people can see that here.”

Matthew Spizale, communications director for the Family Missions Company, said there are currently 300 men, women and children serving as missionaries around the globe on behalf of the organization.

For the past 22 years, the organization has been training, fundraising and sending Catholic families on missions in places like Taiwan, Kenya, Costa Rica, Haiti, the Philippines or Mexico.

Before setting out on mission, families are invited to the nonprofit's headquarters in Abbeville, La., for training in missionary work, as well as how to raise funds for their cause.

“We are not an official part of any diocese in which we work around the world, however, we always work with them and support them how we can,” Spizale said.

When funds are donated to the organization, donors can earmark that money for a particular family's mission, which can involve spreading the Gospel in typically very poor conditions in remote towns and villages.

When the family is first sent on mission, they arrive in the host diocese and live at an established missionary outpost. Eventually, once they're ready, they move to an area where the mission is most in need.

“That first year out in the field is really about you living in a different culture,” Spizale explained. “It's part of the formation.”

Conditions vary as widely as the countries in which missionaries serve. Some families might minister at a university in Taiwan, for example, while the Carmodys are preparing to buy a 4x4 in order to get through Kenya's monsoon Tseason and be able to minister from village to village.

New missionaries are asked to commit to at least two years because of the resources it takes to get them up and running. The idea is for the family to stay in a post long enough to help locals learn how to evangelize their own people.

“We ask them to discern this commitment ahead of time so that when it gets rough, as it certainly will, you have already been through the discernment and will rely on the Lord,” Spizale said.

While being missionaries is a radical change of pace for Chris and Karen, for their children, it's become part of growing up.

For 12-year-old Jack, helping other kids come to know Jesus is a ministry unique to his gifts.

"When I ask kids to go to church, they usually go, but when adults ask them to go, they say no,” Jack said. “When kids get to know Jesus and learn how to pray and go to church and stuff, they are nicer and happier and more fun to be with.”

Younger brother Michael, 9, said when he was in Peru, he made friends with two kids — Carlos and Roberto — who didn't know anything about the Church. After hanging out with them, they became interested in Catholicism.

Katelyn, 15, will be done with her high school homeschooling curriculum by the time the family returns from Kenya. She has embraced being a missionary and sees it as part of her future as an adult.

“If the opportunity presents itself to go to college, it could help me in the mission field,” said Katelyn, who has an interest in computer programming. “I know I want to be a missionary, either temporary or permanently.”

While Anna, 13, is excited to prepare for the family’s next journey, she doesn’t worry about what she needs to prepare or bring with her. She said it's important to live like the villagers, who often have just one or two pairs of clothing and few personal possessions.

“I could just leave with a bottle of water and just be fine,” Anna said. “We really don’t need to bring that much stuff.”

In addition to their homeschooling materials, essentials for the family include board games and comfort items to turn their new house into a home. Typically, the local diocese will help with accommodations and assist the family in finding or receiving donated furniture.

“To me, ministering means explaining the faith in normal conversations, talking to them about Jesus and why it's important to go to church,” Anna said. “When we were in Peru, I got really close to the kids there.”

Sometimes, Anna admits, she wanted to “just be a regular kid” and didn't always talk about Jesus “as much as I should have.”

Living poor among the poor is something Anna has come to appreciate.

“I like being poor because a lot of poor people don't have very many material things to worry about and they aren't busy running around doing a bunch of stuff so they talk about deeper things like what's in their hearts and what's really going on in their lives,” Anna said.

Every few months, the family connects with their financial supporters, known as “mission partners,” through their newsletter, Karen said, and they do take a monthly trip to an area with internet to reconnect to the outside world.

Not everyone is called to be a missionary, Karen said, but “when people donate to our mission, they are invited to take part in this mission with us.”

On July 22, the Carmodys arrived in Mikinduri, Kenya, to begin their next chapter as a family. Those interested in following their adventure can keep up with the family's blog at http://www.carmodyfamilyonmissions.com/.

To donate to their mission, visit, carmodyfamily.familymissionscompany.com or call the Family Missions Company at (337) 893-6111.