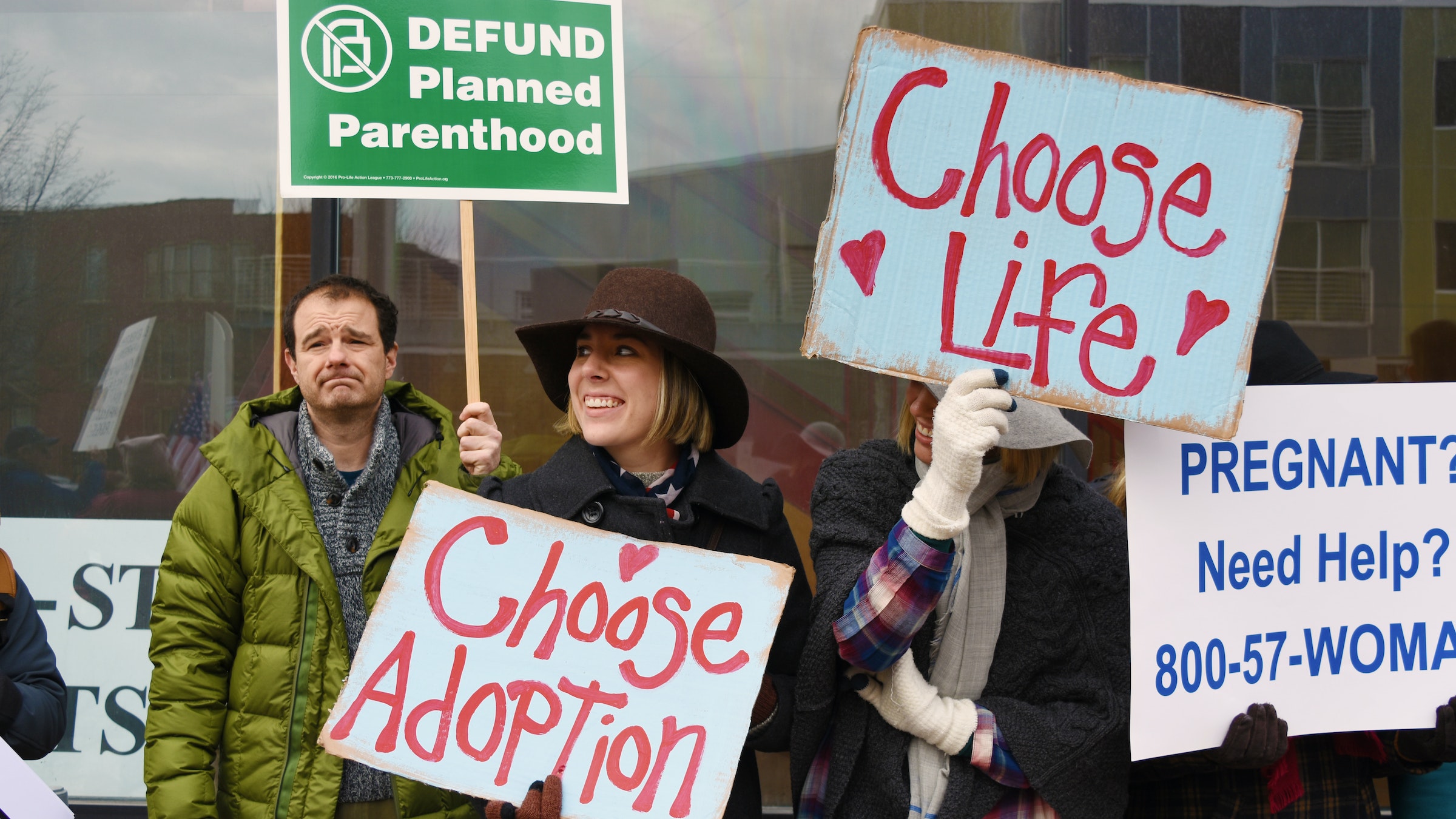 Pro-life demonstrators hold signs outside a Planned Parenthood clinic in Detroit in 2017. Right to Life of Michigan, in cooperation with the Michigan Catholic Conference and other pro-life organizations, launched a petition drive seeking to collect 400,000 signatures to end the gruesome practice of “dismemberment abortions” in the state. (Dan Meloy | Detroit Catholic)

DETROIT — Pro-lifers and defenders of the unborn began a campaign Wednesday to end a gruesome abortion procedure in Michigan, hoping to collect 400,000 signatures to circumvent a promised gubernatorial veto.

The Michigan Values Life ballot committee, organized by Right to Life of Michigan with support from the Michigan Catholic Conference and other pro-life organizations, officially kicked off a 90-day petition drive to ban the controversial “dilation and evacuation” abortion procedure — which involves dismembering an unborn child in the womb.

If successful, the citizen-led initiative would place a bill before the Republican-controlled Michigan Legislature for its approval, circumventing Democratic Gov. Gretchen Whitmer's opposition.

Detroit Archbishop Allen H. Vigneron called on Catholics in the Archdiocese of Detroit to stand up against the “particularly gruesome procedure,” which is typically performed in the second trimester of pregnancy.

“As the name suggest, it involves dismembering an unborn baby by tearing the baby apart limb by limb inside the womb and individually removing each of the body parts,” Archbishop Vigneron said in a letter urging pastors and parishes to participate in the petition drive.

“Since the campaign is an initiative proposal, issue-based and specific to legislation, churches are able to speak out and distribute as much material as they wish,” said Archbishop Vigneron, who, as the metropolitan bishop in the state of Michigan, serves as chairman of the Michigan Catholic Conference. “Indeed, for the Michigan Values Life petition drive to be successful, the assistance of pastors and parishes in the signature gathering process is pivotal.”

In a separate statement, Archbishop Vigneron said the Catholic Church supports “sound and reasonable public policies, especially those which protect the most innocent among us.”

“As these petition drives move forward, I applaud those who continue to change hearts and minds by invoking the humanity, dignity and rights of the unborn child while at the same time being close to and offering unyielding support for women who may find themselves in a challenging or crisis pregnancy,” the archbishop said.

On June 19, the Board of State Canvassers and Michigan Secretary of State Jocelyn Benson approved the language of the proposal, which includes a description of a dilation and evacuation abortion, which is important when discussing the issue with voters, Michigan Right to Life spokesman Chris Gast said.

“We think it is important to really focus on the language of this, the reality of abortion, the tearing off of arms and legs of children” Gast told Detroit Catholic. “A lot of people don’t understand how an abortion works, particularly a late-term abortion.”

Forty-six years after Roe v. Wade, Gast said many Americans are in the “mushy middle” on abortion.

There are many people “who are very uncomfortable with abortion, but because of constant pressure from society along with a lack of information about what a late-term abortion really is, people don’t think about the barbaric nature of this practice,” Gast said. “This gives us an opportunity to educate people about what this procedure is and that it takes the life of an innocent human being.”

If successful, the petition drive would add the ban on dismemberment abortions to Michigan's existing ban on partial-birth abortion, which was passed by the state's voters in 2004.

“The partial-birth ban was upheld by the Supreme Court, so by adding this, we are following the path the court already laid out before us as we continue to chip away against Roe v. Wade,” Gast said.

According to a 2018 report from the Michigan Department of Health and Human Services, there were 1,908 dilation and evacuation abortions in Michigan out of 26,716 total abortions in the state — approximately 7.1 percent.

“D&E abortions are the most common late-term abortion procedure, usually in the 12-24 week period,” Gast said.

Right to Life of Michigan and its affiliates are looking to recruit 10,000 petition circulators to obtain 400,000 signatures in a 90-day period starting Wednesday. Officially, the petition needs 340,047 signatures — 8-percent of the 4,250,585 votes cast in the 2018 Michigan gubernatorial election — in order to circumvent Gov. Whitmer’s intended veto of a similar bill in the state Legislature.

“In all practicality, the petition is the same language as what passed the House and Senate, but we had to pass a separate bill to allow the Legislature to intervene and define it,” Gast said.

Gast added the language used for the petition is drawn from the partial-birth abortion ban, which the Supreme Court upheld, increasing the chances it would pass constitutional scrutiny.

“Really it all depends on the model of the Supreme Court at any given time,” Gast said. “We are using language from their previous decision on partial-birth abortion cases that allowed these bans, and they mention dismemberment abortion. This is just extending the court’s previous logic to a more pro-life-friendly court.”

The Archdiocese of Detroit is asking all parishes to support the petition drive by designating a parish leader to work with the archdiocesan Office of Marriage, Family and Pro-Life Ministry to collect and organize signatures. A letter to pastors included a link to a signup sheet.

Right to Life of Michigan has organized regional meetings throughout the state, educating organizers and volunteers interested in circulating petitions. The organization says 500 to 600 team captains are currently recruiting petition circulators through a word-of-mouth campaign. To date, there have been more than 376 requests on Right to Life Michigan’s website for petitions, which must be officially printed out and mailed; circulators aren’t allowed to print off petitions themselves.

“We have dozens of affiliates around the state who are active in the community and are very connected to the grassroots pro-life movement in Michigan,” Gast said. “People can go to michiganvalueslife.org and request a petition. Once we send it to them, they can go out collecting signatures.”

Initially, there were some questions over a 2018 Michigan law that required each petition to have no more than 15 percent of signatures from any one of Michigan’s 14 congressional districts.

However, on May 22, 2019, state Attorney General Dana Nessel issued an opinion that the distribution requirement was unconstitutional, effectively voiding its impact.

“Even if the court says that the rule is constitutional, it would not affect us,” Gast said, “because we collect from all over the state. The last time we did a collection, we didn’t collect more than 15 percent of our signatures from one congressional district.”

Right to Life of Michigan has used the citizen-initiative process to amend state law four times. In 1987, a petition was approved that banned taxpayer money for abortion. A counter petition also gathered enough signatures, forcing a runoff on the 1988 ballot, which ended in a pro-life victory. In 1990, another successful petition mandated parental consent for abortion for those under the age of 18. In 2004, voters passed Michigan's partial-birth abortion ban, and in 2013, another petition prevented health insurance plans from covering abortion through the federal 2010 Patient Protection and Affordable Care Act.

Twelve states currently have dismemberment abortion bans on the books.

With abortion a hot-button issue across the country, states such as Georgia, Alabama and Ohio have recently passed laws restricting abortion as soon as a fetal heartbeat can be detected.

A similar effort to pass “heartbeat” legislation in Michigan — spearheaded by an Ohio-based group's formation of a Michigan affiliate, the Michigan Heartbeat Coalition — has been formed, but local pro-life activists have reservations about how it could impact existing state law.

The Michigan Catholic Conference and Right to Life of Michigan expressed concerns with the petition because a pre-1973 Michigan law already bans most abortions — but that statute is currently being superceded by the U.S. Supreme Court's Roe v. Wade decision.

“While the proposal advanced by the 'heartbeat' coalition shares the goal of ending abortion, it appears to raise the possibility of negatively impacting existing law in Michigan that protects all unborn human life, which only lies dormant due to the Roe v. Wade decision,” Archbishop Vigneron said in a statement.

“While the heartbeat petition is also gathering signatures, the MCC has serious concerns with the proposal, as it could weaken existing protection in Michigan abortion law,” Archbishop Vigneron wrote.

Gast said Right to Life of Michigan shares those concerns over the Heartbeat Coalition’s petition drive, but added it's always a good thing when people are focused on the issue.

“Since the passage of laws in Alabama and Ohio, and really since New York passed their most recent abortion laws, people have been calling our office and asking how they can get involved,” Gast said. “From our perspective, it always is easier when people are focused on the issue. Any time we have people talking about abortion — it’s horrific realities — that is a good thing.

“The key takeaway from all of these conversations around the country is that people are awakening to the real horrors of abortions. When you describe what is really happening here, people are starting to pay attention,” Gast continued. “Because of this, you just feel that Roe v. Wade’s days are numbed.”