Archdiocesan grade school enrollment up 11% this year, 7% since start of pandemic 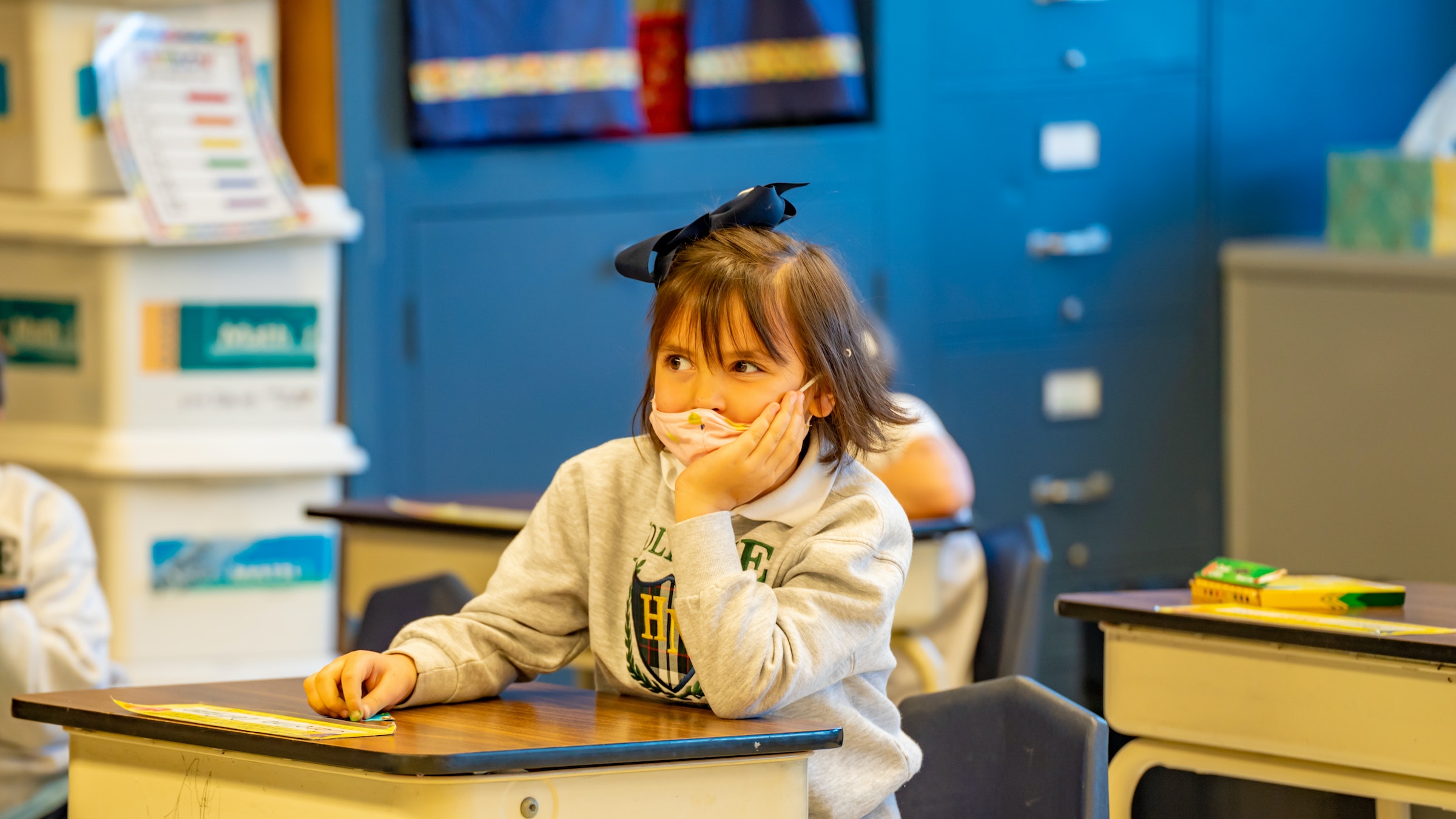 A young girl pays attention in class at Holy Name Catholic School in Birmingham in early November. According to figures reported by the Archdiocese of Detroit, archdiocesan Catholic grade school enrollment has risen 11 percent this year, and 7 percent overall compared to pre-pandemic enrollment. (Photos by Valaurian Waller | Detroit Catholic)

Many families that sought a ’12-month option’ during pandemic are instead finding a ‘forever home’ in Catholic schools, administrators say

DETROIT — The number of students enrolled in archdiocesan Catholic grade schools continues to rise compared to pre-pandemic enrollment, according to enrollment figures reported by the Archdiocese of Detroit.

Student enrollment has increased 7 percent across archdiocesan grade schools over the past two school years and is up 11 percent since last year, Laura Knaus, interim superintendent of Catholic schools, told Detroit Catholic. The data was collected by the archdiocesan Department of Catholic Schools this fall and submitted to the National Catholic Educational Association.

Knaus said the positive trend demonstrates that Catholic schools have been able to retain students after many experienced increased interest during the pandemic’s early days. 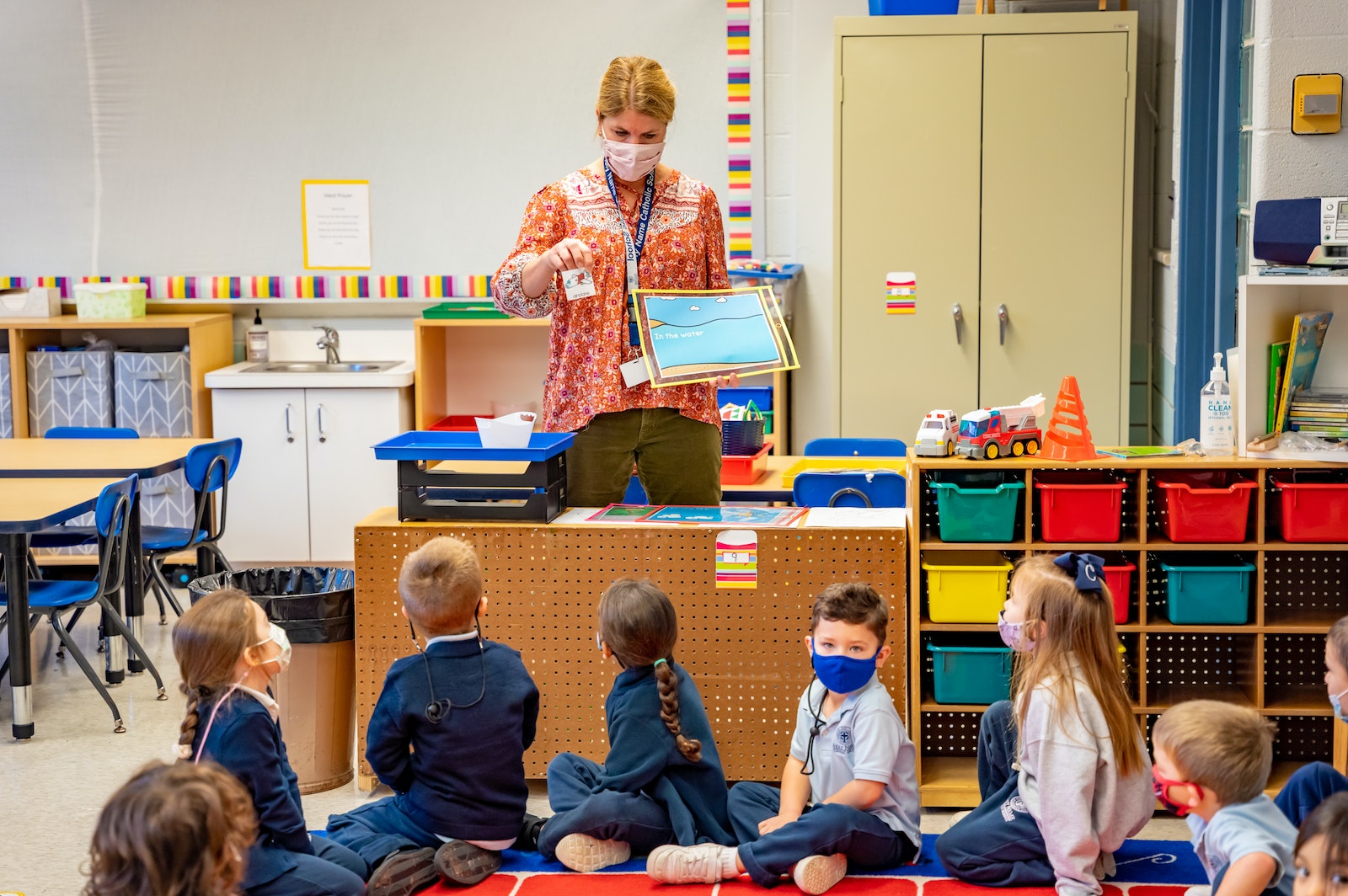 Students at Holy Name Catholic School in Birmingham participate in a lesson in early November. Holy Name has added about 100 students to its rolls over the past two years, with many grade levels full, administrators say.

“Part of the appeal for Catholic schools last year was the in-person instruction when other schools were still remote,” said Knaus, who took over as interim superintendent in October. “My hope is that (parents) have seen the high quality of faith and academic formation our schools provide and will continue to invest in a Catholic education with us.”

Among the schools experiencing the highest percentage of enrollment increases were St. William in Walled Lake, St. Fabian in Farmington Hills, Holy Cross in Marine City, and Holy Name in Birmingham, Knaus said.

Holy Name assistant principal Liz Kozadinos said during the past two years, the K-8 school increased its student population by 100 students, and many of the grade levels are full.

“We capped all our classrooms at 20 students to ensure the continuation of academic excellence throughout the building,” Kozadinos said.

Enrollment at Holy Name was at a “comfortable level” before the pandemic, Kozadinos said, but its ability to safely remain in person when other schools were remote gave the school a chance to show new students and families the deeper value of a Catholic education. 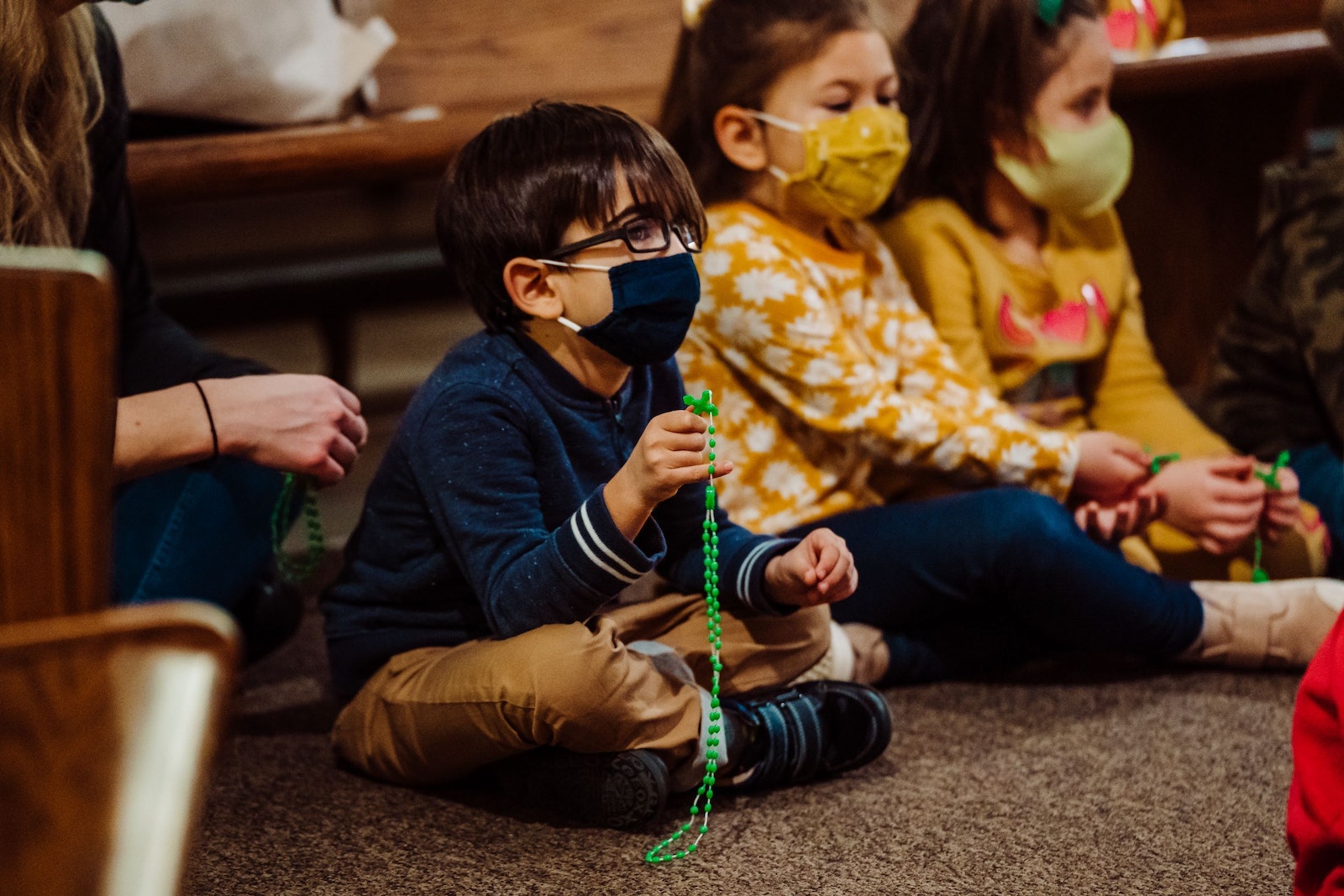 Students at Guardian Angels School in Clawson participate in a school-wide rosary last year. Across the archdiocese, teachers and administrators have stepped up to make sure classrooms and activities are safe, enriching and fun for students, despite the pandemic, interim superintendent Laura Knaus said.

“Many of them didn’t know that Holy Name has challenging academics and a variety of extracurriculars,” Kozadinos said of the new parents and students. Families also learned of the “warmth” of the staff and administration, who were able to devote individualized attention to students, she added.

When COVID-19 hit and many public schools remained online last year, Katie Phelan knew her kids needed to have in-person instruction and decided to enroll her sons Noah, 11, and Matthew, 9, at Holy Cross Catholic School in Marine City.

“We went there during COVID because they had small class sizes, which was a better fit during the pandemic,” Phelen said. “Their procedures for COVID were organized, and they were on top of everything.”

Phelan, whose family is not Catholic, said there was no question her children were going to stay at Holy Cross this fall. She also enrolled her kindergarten-age son, Elijah, this year.

“We love the fact that they teach each child at their level,” Phelan said. “They are able to specialize the instruction for each and every kid according to their needs.”

Holy Cross principal Betsy Davenport said over three years, the school has increased from 53 students enrolled in its K-8 program to 120 students in preschool through eighth grade this year. The preschool was added this fall.

“It’s pretty incredible,” Davenport said. “Most of our families that came in new last year stayed this year. We knew a lot of families came to us wanting to be in-person, but then they came here and fell in love with it and our approach to education.” 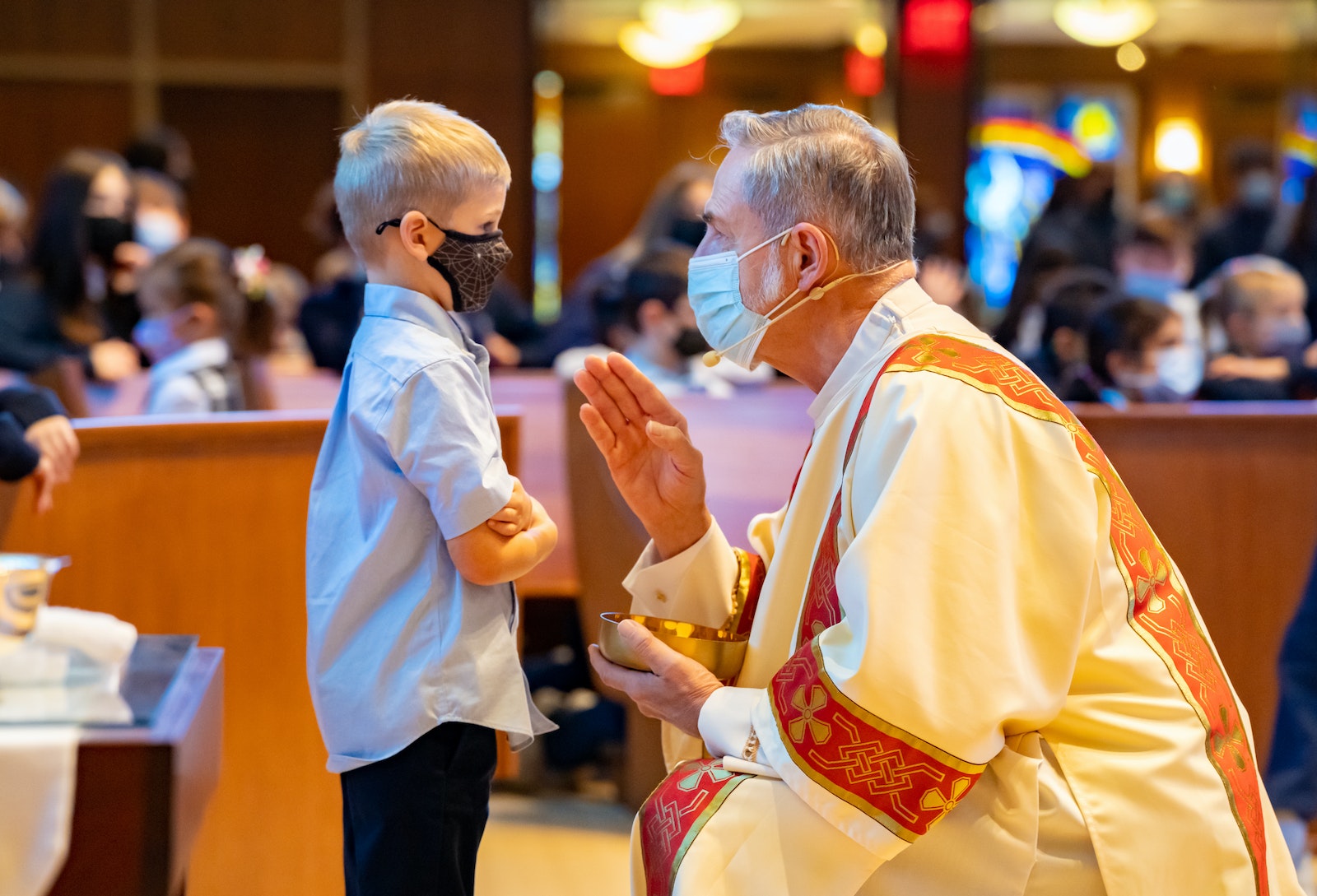 Holy Name students attend an all-school Mass in early November. Catholic schools across the Archdiocese of Detroit have experienced increased enrollment as parents discovered the benefits of a Catholic education since the pandemic began.

The school needed to hire new staff and moved away from the combined grade level instruction of the past. The influx caused Holy Cross to think “outside the box,” Davenport said, in order to make in-person instruction safe and fun.

“I think it took the pandemic to bring (new families) here, but I think being here showed them the value of a Catholic school education,” Davenport said.

St. Fabian had been experiencing a decline in its student population leading up to the pandemic, but that changed with a 71 percent increase in the fall of 2020, according to Renee Pompi, advancement director at St. Fabian.

“A lot of that I will attribute to COVID, but we retained 85 percent of those new students, and I would attribute that retention to our teachers and new curriculum we put in place,” Pompi said. “These were families who were looking for a 12-month option and found a forever home.”

Pompi added a small number of students left the school this fall, but only so they could attend neighborhood Catholic schools closer to home. Last fall, some students were traveling long distances to attend St. Fabian, she said.

Pompi commended the Archdiocese of Detroit’s school administration, which was able to shift gears quickly at the beginning of the 2020-21 school year to offer safe in-person learning for those who wanted to attend.

Knaus credits the hard work of the schools’ administrations and staff members for their resilience in the face of challenges and their commitment to the ministry of Catholic education. She expressed hope that families who have experienced the benefits of a Catholic education for the first time will continue to find it an enriching, rewarding place for their children.

“My hope is people will continue to see the immense value of an education that is centered on the person of Jesus Christ, and that we will be able to continue serving more students in the future,” Knaus said.