40 years on the other side of the world: Manresa's Fr. Leo Cachat reflects on life 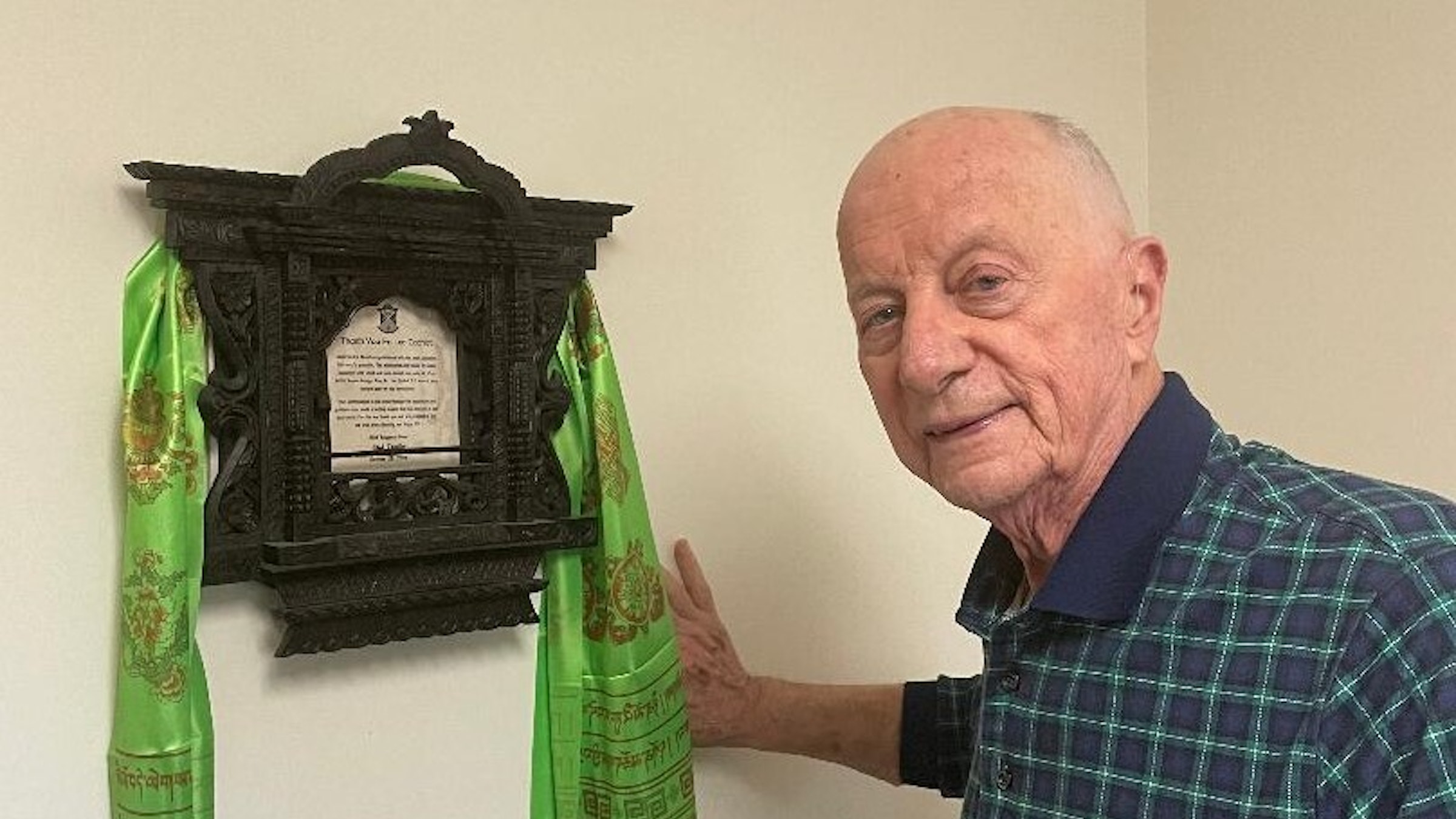 Fr. Leo Cachat, SJ, retreat director at Manresa Jesuit Retreat House in Bloomfield Hills, returned to the United States in 2001 after a 40-year ministry serving in some of the poorest areas of the world, including India, Nepal and Burma. While in India, he spent time ministering with St. Teresa of Calcutta and monks steeped in Eastern tradition to get a better understanding of how to minister in that part of the world. He is pictured with a gift from his students in Nepal. (Jim Dudley | Special to Detroit Catholic)

88-year-old Jesuit spent decades in India, Nepal and Burma, including a month with Mother Teresa 'serving Jesus' in the poorest of the poor

BLOOMFIELD HILLS — Fr. Leo Cachat, SJ, was sitting on a bench near a bust of St. Ignatius when a reporter arrived at Manresa Jesuit Retreat House in Bloomfield Hills on a cold November afternoon. He led the way to his office in the Tudor-style retreat house that sits on 39 wooded acres and where the River Rouge quietly cuts a path through the grounds. On the walls in his office are photos from his time spent on the other side of the world, including one of a Tibetan lama, a Buddhist spiritual leader.

“He was a refugee and a very good lama,” the energetic 88-year-old Jesuit said with a laugh. “I still talk to him sometimes.”

Fr. Cachat made a few cracks about his messy desk with the wave of his hand before sitting down to share his story.

The seventh of eight children, Fr. Cachat was born in 1933 and grew up in Cleveland. He attended the Jesuit high school there, St. Ignatius, before studying pre-med at John Carroll University.

"I didn’t want to be a Jesuit," Fr. Cachat said. "I had a nice girlfriend at the time, but the Lord came knocking. I resisted for a while, but finally I said, 'Lord, if this is what you want ...' But I wanted to go to the missions. I was 21 years old at the time.”

Serving with a saint

“I went with two other fellows to Kathmandu. It was the happiest time of my life at St. Xavier’s School, Godavari, teaching Nepal boys," Fr. Cachat said. 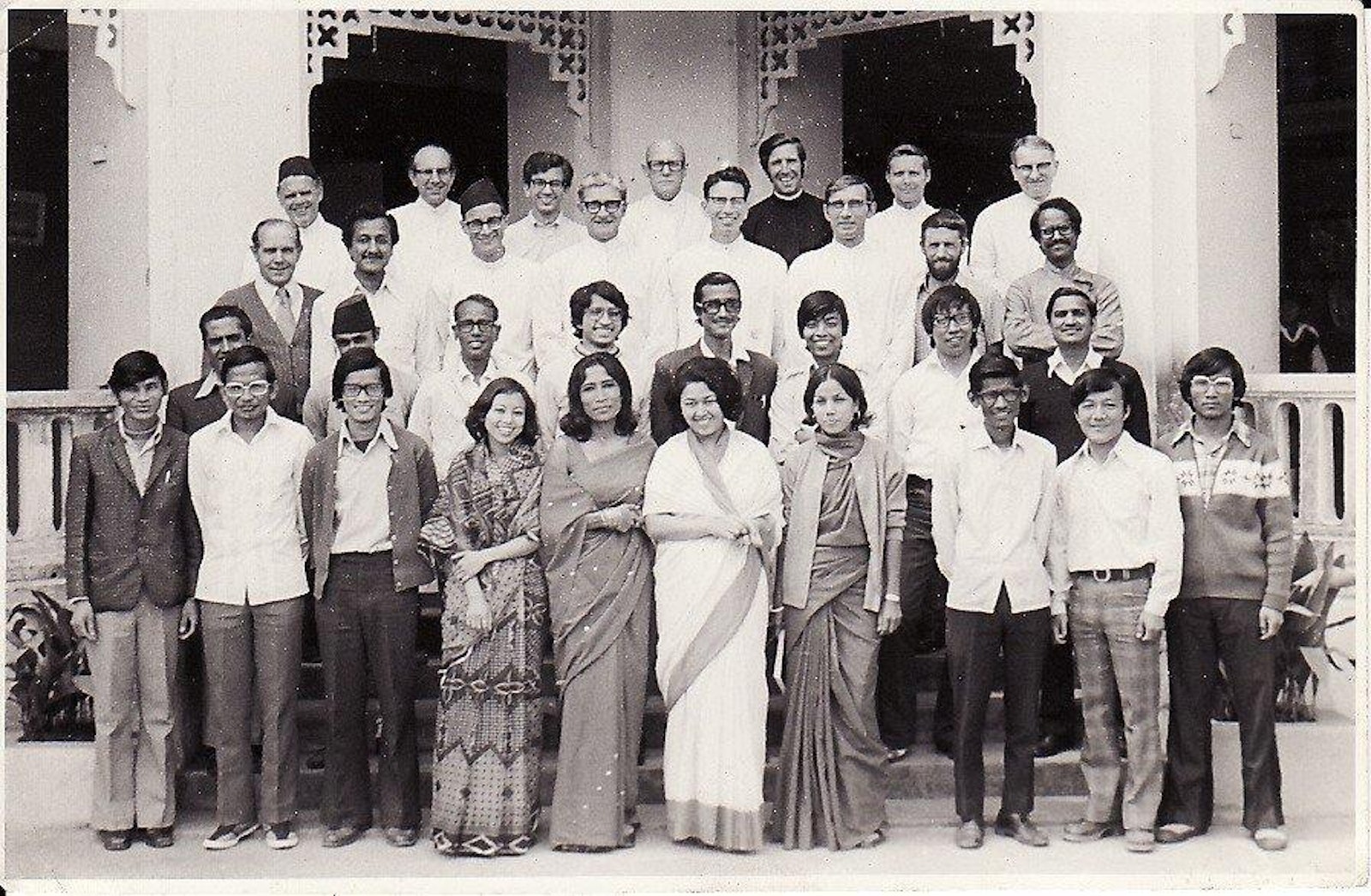 When Fr. Marshal Moran, SJ, of the Jesuit Patna Province and founder and principal of St. Xavier's in Patna, India, was invited to Kathmandu to start a similar school, there were no indigenous Christians, Fr. Cachat said.

"Though Nepal was an independent country, its external affairs were handled by the British resident," Fr. Cachat said. "There were very few foreigners. We went in 1961 with the realization that there would be no proselytizing. The people there just wanted an education, and to us that was a real value. We still set a good Christian example.”

For the next four years, Fr. Cachat studied theology, first at the Jesuit-run Papal Seminary in Pune, India. His next three were spent at St. Mary's Hill in Kurseong, where he was ordained in 1966. His final year of Jesuit formation began the next year in India’s Bihar State. This included a 30-day Ignatian retreat, studies in Jesuit spirituality, and three mission experiments, each one month long. Fr. Cachat's first experiment was in Calcutta, living with the Missionaries of Charity Brothers. 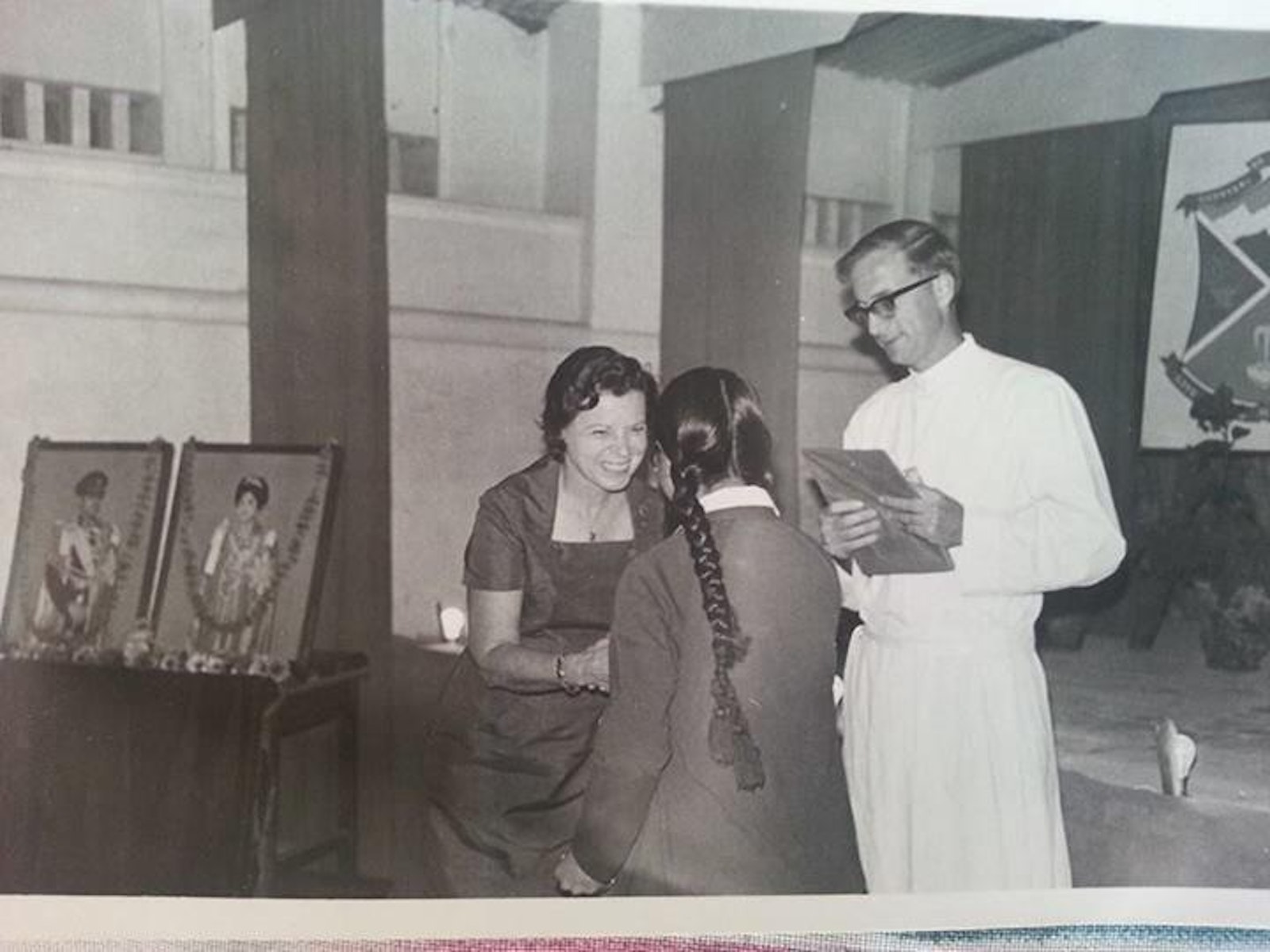 A young Fr. Cachat in 1975, then principal of St. Xavier's School in Jawalakhel, hands out awards to students.

"I spent one month with Mother Teresa and saw her every day. It was wonderful to be with her and was the high point in my training," Fr. Cachat said. "At this time in 1967, Mother was already well known, but she was very down to earth. You could tell the people in India recognized her as a God-realized person."

Fr. Cachat worked at the Home for the Destitute Dying, where St. Teresa had erected a statue of the Immaculate Heart of Mary at the front entrance. He never witnessed the diminutive nun depressed or down, he said.

"That’s where our day would start. She would lead us in pray every morning, but what struck me was she’d turn around and say, ‘Remember sisters,’ — and she’d look at my Jesuit companion and me — ‘what you’re doing for the poor, you’re doing for Jesus, so keep your eyes open for Jesus.’”

Fr. Cachat was visibly moved by the memory — and the lesson stuck. 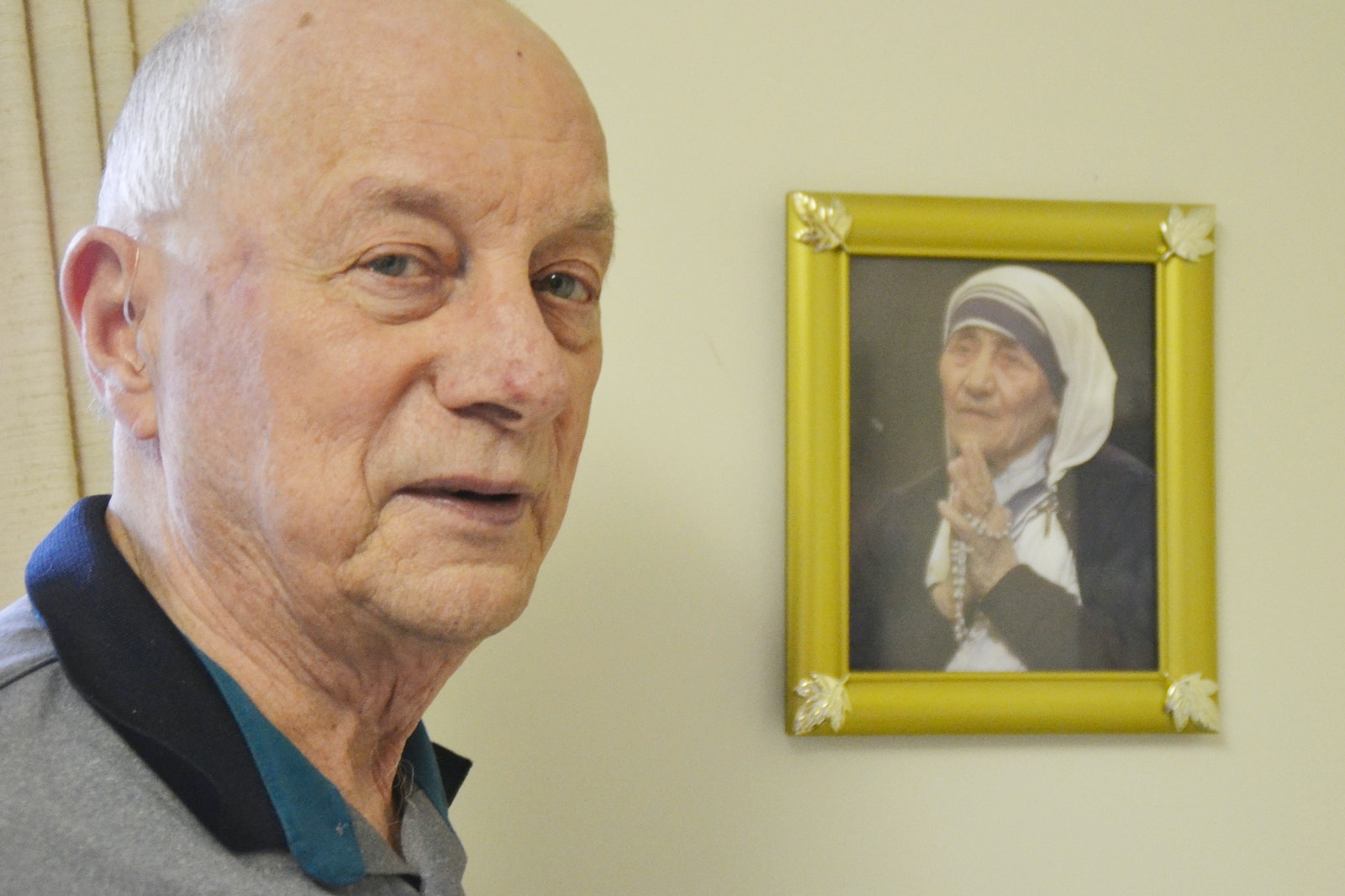 In 1967, Fr. Cachat spent a month serving with St. Teresa of Calcutta's Missions of Charity Brothers. He described the future saint as "very down to earth," constantly reminding the sisters in her charge that their work with the poor was first and foremost "for Jesus." (Jim Dudley | Special to Detroit Catholic)

“To hear that day after day, whew," Fr. Cachat said. "On one occasion, I went with the brothers to pick up a man off the side of the road. We had to cut his clothes off him. We washed him, cut his toenails and deloused him. He was so malnourished; it took a long time for him to eat. I was feeding this man regular bread, putting it into hot milk, and putting it on his lips and it gave me time to pray. We were able to take care of Jesus, like Mother Teresa said.”

Serving a world away

Fr. Cachat’s second mission experiment was with famine relief and parish work at Sasaram, India. There had been three years without rain, and people were starving. With food packets from Catholic Relief Services, Fr. Cachat's helped organize food for work programs. Nursing mothers and babies received packets of milk powder and food.

The third experiment was at Holy Family Hospital in Patna, where he taught the student nurses English and worked in the hospital at a free clinic where an American ophthalmologist volunteered to perform cataract operations. After five years in India, Fr. Cachat returned to Nepal in 1968. For the next 10 years, he taught school, managed hostels, and was principal of St. Xavier in Kathmandu. In 1977 and 1978, Fr. Cachat studied at the Sadhana Institute near Pune, India.

Fr. Cachat also spent a week with monk Bede Griffiths at his monastery in Kerala.

“We’d eat on the floor," Fr. Cachat said of the experience. "There was a little raised table, but you’d sit cross-legged. We’d each have a little stool like the Carmelites use when they meditate.”

Fr. Cachat established a retreat center, Godavari Ashram, in 1978. From 1984 to 1991, he was superior at the recently established formation house called Kamal Niwas. He also led retreats throughout Asia and served as regional superior for the Jesuits in Nepal from 1991 to 1997.

“I expected to spend my whole life in Nepal. I thought I’d die and be buried there," Fr. Cachat said. "But in 1997, something deep inside of me was telling me my time in Nepal was finished. I was in the chapel when it happened. It was a deep awareness, a realization. I just didn’t pay attention to it for a while. (I said), 'If you want me to go, Lord, you’ll have to hit me over the head because I’m stupid.'”

Fr. Cachat came home on a three-month sabbatical before traveling to the Holy Land for 10 weeks to serve as a spiritual guide to Maryknoll priests and brothers. He was then missioned to Burma for three years.

“Burma was a wonderful experience with a wonderful group of people. The bishop of Taunggyi, a beautiful hillside town in Shan State, invited the Jesuits to start a novitiate," he said. "The climate and culture were very much like being in Nepal. I was in my sixties at that time. I spent over 40 years of my life in that part of the world. My best friends are there and it’s more my way of life.”

Fr. Cachat returned home in 2001 with two bags and a carry-on. He became chaplain to the faculty and staff at University of Detroit Jesuit High School, but it took him a few years to readjust to American life. In 2007, he joined the ministerial staff at Manresa and continues to carry a full load with individually directed retreats, conference retreats and spiritual direction. He also takes his turn offering the weekday Mass at Manresa.

“I’ve adjusted to being here, and I’m very happy being here, knowing that God wants me here," said Fr. Cachat, who returned to Nepal briefly in 2012 and again in 2019 to give retreats to the Jesuits there. "I’m 88, going on 89 now, and my legs prevent me from going back. It’d be a miracle if I did.”

Steve Raymond, associate director at Manresa, said the elder Jesuit has been a blessing to the staff, volunteers and retreatants at Manresa.

“Fr. Leo is a wonderful friend," Raymond said. "His genuine interest in people and unique perspective of the world — having spent 40 years as a missionary in India and Nepal — has brought insight, joy and laughter to many of us at Manresa. Self-deprecating and somewhat of a practical joker, one never knows what Fr. Leo might do next.”

Fr. Cachat isn’t slowing down at all. He’ll be leading a retreat to Oberammergau, Germany, in June and will again be leading his popular Christian meditation retreat at Manresa from May 20-22.

“Well, if I’m still here,” Fr. Cachat said with a laugh. “If God is willing, I will be here. That’s my normal way of praying now, so it’s really easy.”