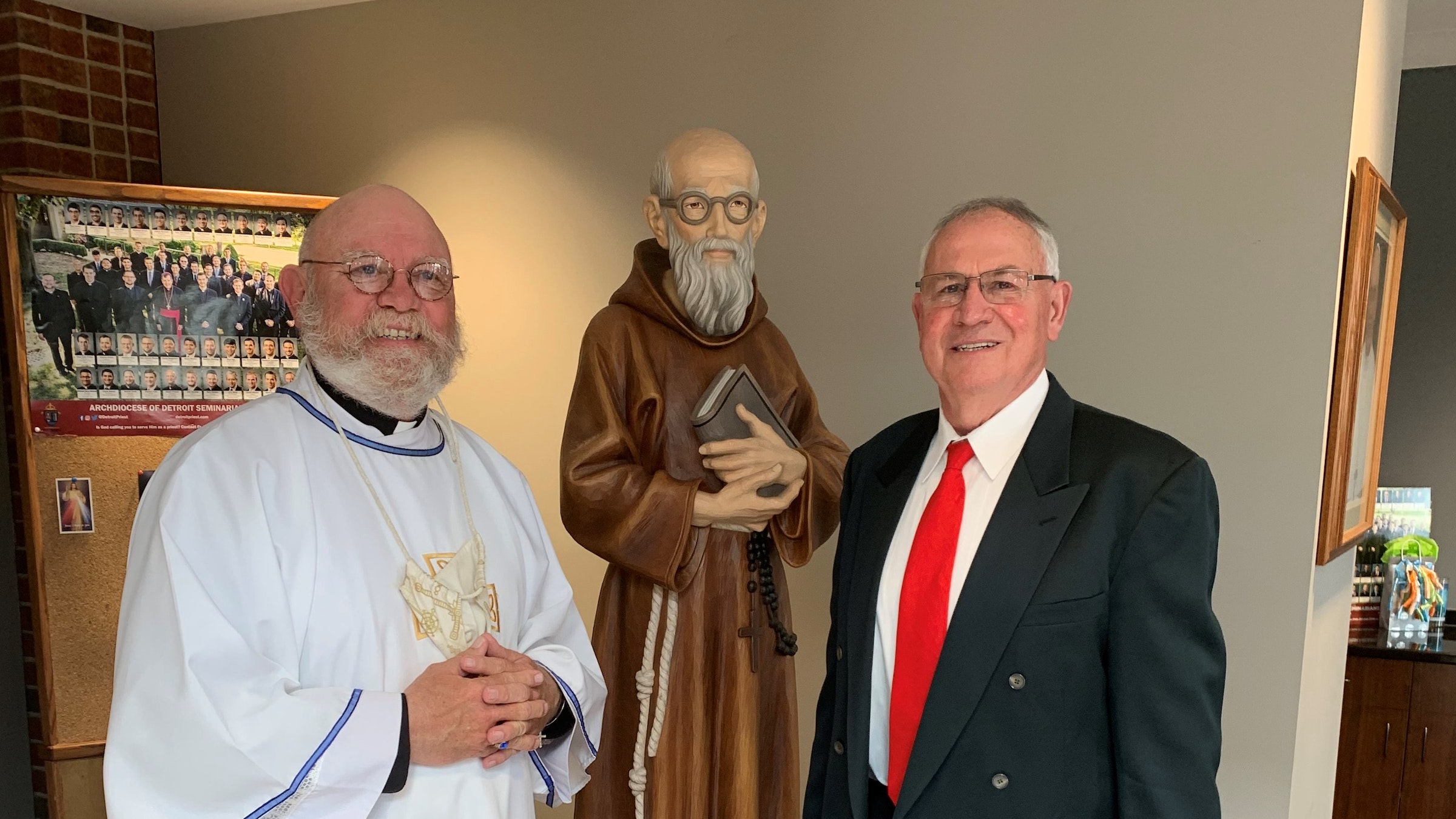 Deacon Pete Lynch and Dan Gormley pose for a photo with a statue of Blessed Solanus Casey at SS. Peter and Paul Parish in North Branch. Deacon Lynch brought a relic of Blessed Solanus to Gormley's bedside at the hospital when Gormley was battling a severe case of COVID-19 last year. To doctors’ surprise, Gormley pulled through. (Photos courtesy of Teresa Gormley)

Doctors said Dan Gormley was the sickest patient they’d treated who survived — but his wife, children and parish community know why

NORTH BRANCH — Daniel Gormley was a healthy 67-year-old man when he started to feel ill one spring day in 2020. He had a fever at first, but no other symptoms.

He took a COVID-19 test, not expecting it to come back positive. After all, Dan and his wife, Teresa, were taking precautions to protect themselves from the virus: they sanitized doorknobs around their home daily, wiped down packages, and limited their interaction with others.

Gormley’s symptoms became progressively worse over the course of the next few days. When he became noticeably weak, Teresa knew it was time to take him to the hospital. She dropped him off at the emergency room door and went to park the car.

It would be the last time they would see each other for 49 days.

Dan was admitted on May 28, 2020. Two of their daughters, Kelci, 23, and Karmyn, 44, wanted to share his situation with friends and family on Facebook. Teresa was reluctant at first, knowing Dan was not a fan of social media.

“But then they said to me, ‘Mom, we have to put it out there because Dad needs people praying for him,’” Teresa told Detroit Catholic.

That day’s Facebook post read, “Please pray for my husband Dan who is at McLaren in Flint in ICU with lung issues and low oxygen levels, may or may not be COVID-19. Need prayers, please.”

Dan and Teresa are members of the family of parishes in northern Lapeer County and attend SS. Peter and Paul Parish in North Branch.

The day after Dan was admitted, he learned he had the virus. Dan and Teresa’s 25-year-old daughter, Karli, a physician’s assistant, was in contact with the doctors daily. Karli relayed the information to Teresa, and one of Dan’s sons, Matthew, a physician, would also consult with doctors by phone.

Dan was incoherent at times or too weak to talk, rendering him unable to communicate with his family for six weeks.

“That was really hard on me. I’m a family person,” Dan said. “I truly felt like I had a glimpse of what hell is like. If being in darkness and isolation when I was separated from my family is anything what it’s like to be in hell when you’re not able to be with God, I don’t ever want to be there. It’s a reminder to live my life for Him and to make good choices.”

“If being in darkness and isolation when I was separated from my family is anything what it’s like to be in hell when you’re not able to be with God, I don’t ever want to be there. It’s a reminder to live my life for Him and to make good choices.”

At the end of July, the doctors told Dan he would need a double lung transplant.

Margaret Kaminski, a parishioner at St. Mary’s of Burnside Parish in North Branch, learned that Dan wasn’t doing well. She recalled that the parish was in possession of a relic of Blessed Solanus Casey, on loan from the Archdiocese of Detroit. She texted her prayer group, Sisters in Christ, asking whether anyone knew if the parish still had the relic and suggesting it be taken to Dan at the hospital.

“I have a lot of faith in relics and in scapulars,” Kaminski said. “I’ve been blessed to see the miracles that can come from them.”

One of the women in the prayer group, Kathy Lynch, is the wife of the deacon of the parish, Deacon Pete Lynch. Deacon Lynch served as the custodian of the relic while it was at the parish.

Despite several obstacles, Deacon Lynch was at Dan’s bedside two days later with the relic. He and Dan prayed for more than an hour, and at one point, Deacon Lynch placed the relic on Dan’s chest.

“The deacon asked me, ‘Dan, do you believe Jesus is healing your lungs?’” Dan said. “And I truly did. Something changed after that.”

Something had indeed changed: Dan’s oxygen levels improved within a day. He was feeling stronger. Doctors and nurses noticed it, too.

“The nurse said the next morning that something was different about me,” Dan said. “After Deacon (Lynch)’s visit, the doctors never talked to us about a lung transplant again.”

Teresa and Dan’s children and grandchildren gathered at SS. Peter and Paul to pray for Dan around a statue of Blessed Solanus Casey the day after the relic was with him at the hospital. It was July 30, 2020, Blessed Solanus’ feast day.

Thousands of people around the world were praying for Dan, thanks to the Facebook page and word of mouth. Teresa received messages of support from as far away as Australia. Their close friend, a Lutheran minister, asked his congregation to pray. Teresa’s cousin, also a Lutheran minister, was praying for Dan along with his congregation who sent cards and letters of encouragement.

Twelve days later, Dan was discharged from the hospital on Aug. 10 — 75 days after he was admitted. Dozens of nurses and doctors lined the hallway to cheer him on as Dan was brought out in a wheelchair.

“I was so moved when they wheeled him out, to see them cheer for him like that,” Teresa said. “All of their hard work had paid off. This was a success story for them, too.”

To this day, many of his doctors say Dan was the most seriously ill COVID-19 patient they’ve treated who survived.

“It’s all for naught if it’s not for God’s glory,” Deacon Lynch said. “I firmly believe that God touches us all the time, even if we don’t see it. In this case, God’s glory is all over it for everyone to witness.”

Kaminski doesn’t know Dan personally, but was thrilled to learn he is doing well. She downplays her role in the story — for God’s glory, she says.

“When I heard Dan wasn’t doing well, I had the impulse to send that text; all I did was cooperate with the Holy Spirit. As soon as I sent it, I felt a profound sense of peace,” Kaminski said. “Deacon (Lynch) was truly the one that cooperated with the Spirit, to have the determination to make it happen. That was a gift of faith. I’m just so grateful for the intercession of Blessed Solanus.”

A second chance at life

Dan’s progress has been slow but steady. Five people had to help him into the house the day he came home from the hospital, but today he is walking two to four miles per day and lifting weights to get stronger.

In a Facebook post from Sept. 20, 2020, Teresa wrote, “Every day Dan makes and meets a new goal, whether it be extending his exercise regimen, walking an additional 100+ steps, whatever he sets his mind to! A few days ago, I found that he made his way off the back deck and used his walker to get to the closest flower bed and was on the ground PULLING WEEDS, still tethered to his oxygen tube!”

Doctors thought he’d be on oxygen until June or July, but the oxygen tanks were returned in February.

“I’ve always been a goal-oriented person,” Dan said. “I feel like I’ve been given a second chance, and I want to challenge myself to improve.”

Dan looks forward to using his backyard pool, working in his backyard, and retiring from his job soon to enjoy it all. He helps his 98-year-old mother, who lives alone and prays six to seven rosaries per day.

Above all, Dan is grateful to be able to spend time with his seven children and 15 grandchildren whom he missed so much while he was in the hospital.

“Teresa and I pray a rosary every night, and we pray for everyone we know who is suffering,” Dan said. “We’ve lost some close friends to this virus. I get this survivor’s guilt, and that’s hard. But I know God has a plan for me. He’s not done with me yet.”