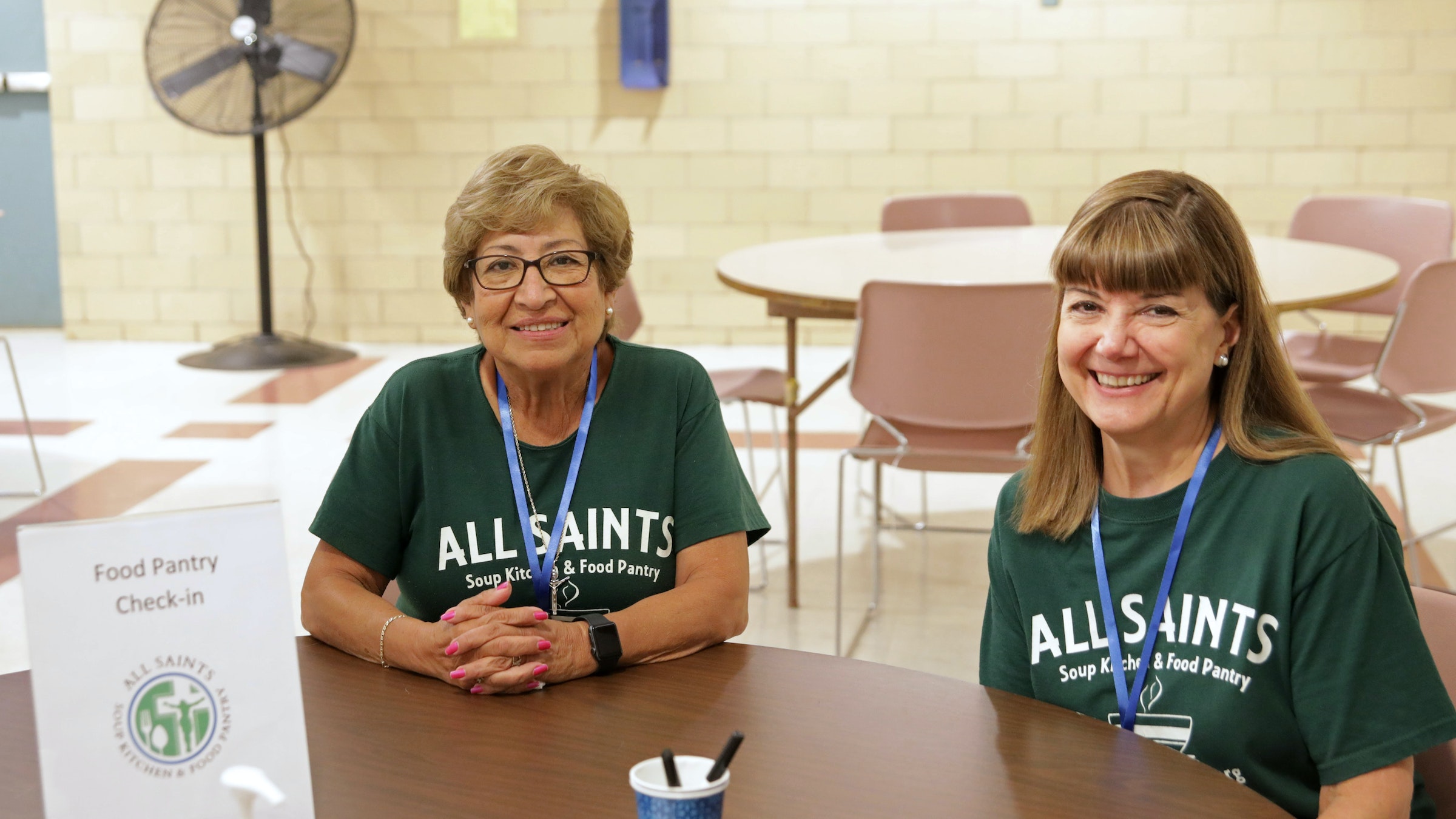 Maria Macon (left) and Sue Hegedus (right) are volunteers at the All Saints Soup Kitchen and Food Pantry, which recently reopened in the lower level of the former St. Andrew’s gymnasium on Detroit’s west side. The food panty is open 1-3 p.m. on Mondays and Thursdays, serving the 48209 and 48210 ZIP codes. (Photos by Daniel Meloy | Detroit Catholic)

DETROIT — All Saints Soup Kitchen and Food Pantry is again serving God’s people on Detroit’s west side after moving to the site of a former Catholic parish.

The kitchen and food pantry, which once operated out of the former All Saints Church on Fort Street, reopened June 13 in the lower level of the former St. Andrew School gymnasium on Wagner Street.

The move comes two years after All Saints Soup Kitchen and Food Pantry closed in 2020 when the former All Saints Church at Fort and Springwells was sold to make way for the Gordie Howe International Bridge. The church was closed in 2017 when the parish merged with nearby St. Gabriel Parish, and the building was demolished in March.

The new All Saints Soup Kitchen and Food Pantry opened June 13, making use of the cafeteria in the lower level of the former St. Andrew gym and the extra storage space throughout the building, which is now owned by the Detroit Police Athletic League. 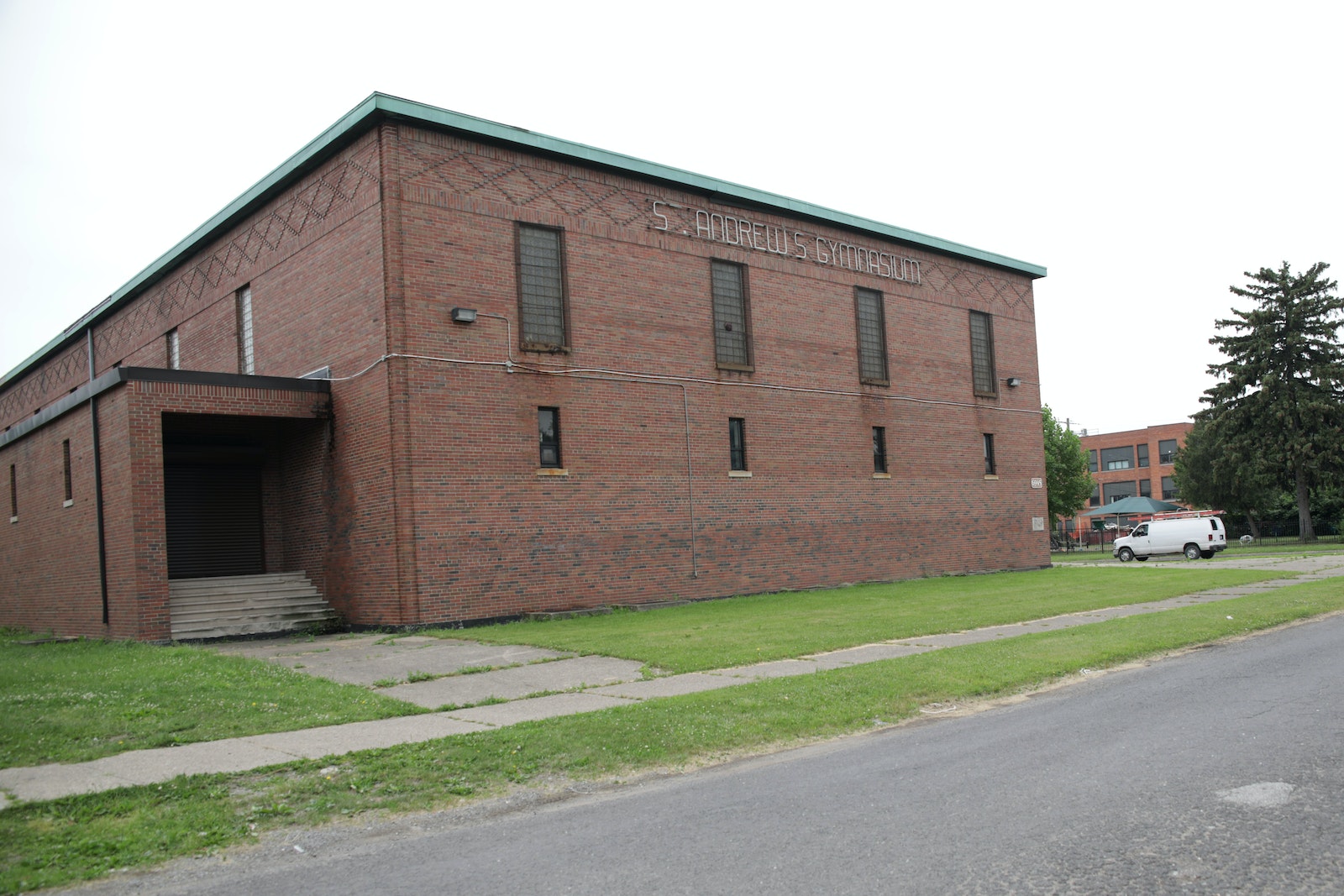 The new All Saints Soup Kitchen is located in the lower level of the former St. Andrew School gymnasium on Wagner Street on Detroit's west side. The building is owned by the Detroit Police Athletic League, with Catholic Charities of Southeast Michigan renting the lower level, which includes a kitchen and cafeteria.

“Because it was a cafeteria for the St. Andrew grade school and high school, this location is built to accommodate our needs at the All Saints Soup Kitchen and Food Pantry,” Dave Allen, a volunteer and former director of All Saints, a ministry of Catholic Charities of Southeast Michigan, told Detroit Catholic. “It’s very sizable and in good shape and hasn’t been used in a while.”

The food pantry is the only portion of the ministry operating at the moment, as Catholic Charities waits for city health department approval to prepare and serve food at the new location.

The food pantry is open 1-3 p.m. on Mondays and Thursdays for those living in the 48209 and 48210 ZIP codes who are already eligible to receive government assistance.

“For more than 20 years, we were located on Fort Street and were part of the community,” Allen said. “We have a lot of All Saints alumni, parishioners, people who lived around the area volunteer at the soup kitchen, which is why we wanted to stay close to the original location. There is a sense of, 'This is my neighborhood,' so we had that personable connection to that community.”

The area around the former All Saints Church had become more industrialized since the parish was founded in 1896, and even more so in recent years with the expansion of Interstate 75 and the Gordie Howe International Bridge construction, which made it increasingly difficult for guests to access the ministry's services. 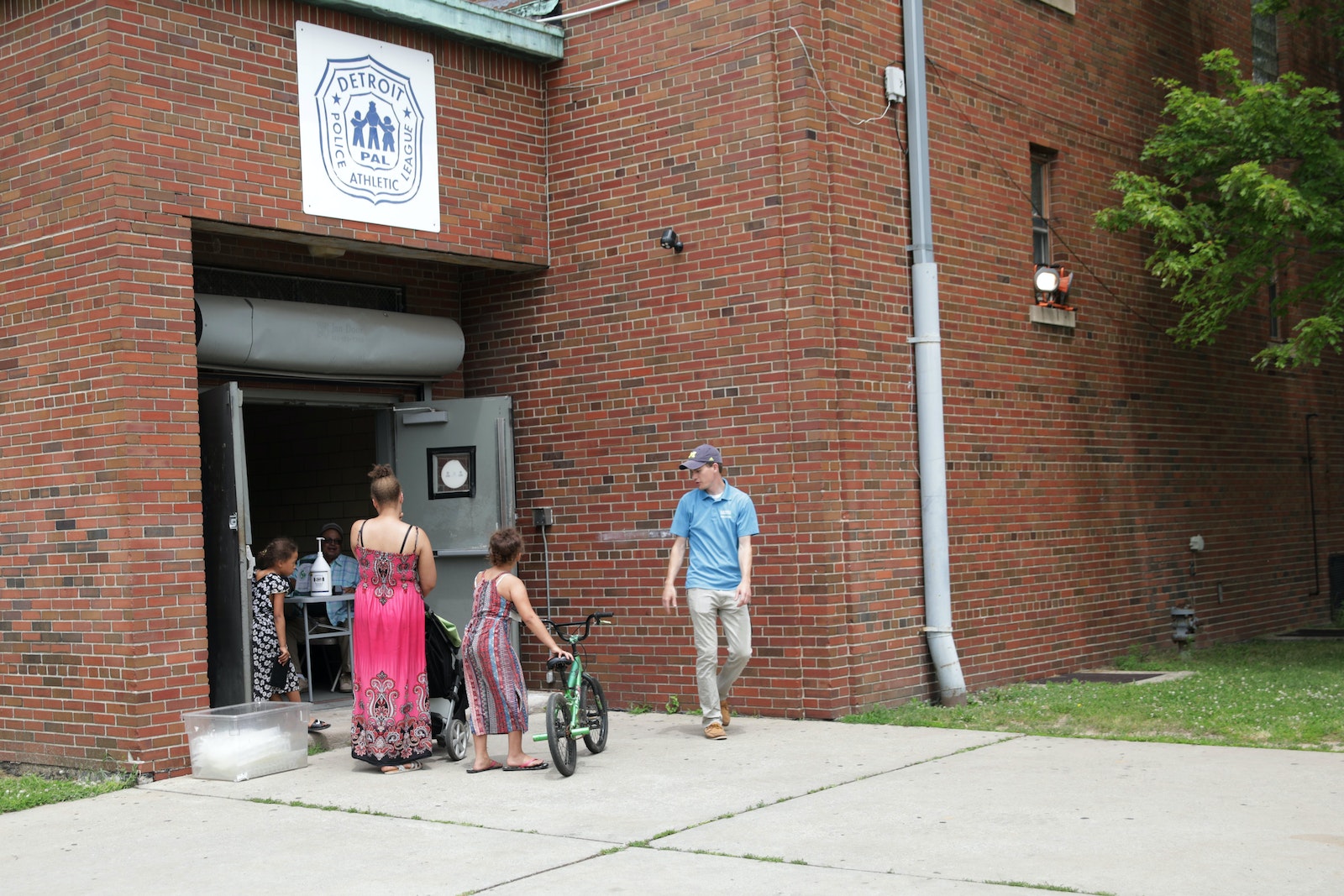 All Saints Soup Kitchen and Food Pantry opened its food pantry June 13 while the soup kitchen is awaiting City of Detroit Health Department approval. The location serves residents in the 48209 and 48210 ZIP codes who are already receiving state assistance.

By contrast, the new location is in a neighborhood and near other nonprofits such as Bridging Communities and Matrix Human Services, along with All Saints’ new landlord, Detroit PAL, a well-known fixture in the community organizing after-school athletic programs.

“The loving community environment of All Saints Soup Kitchen means it’s a place to supplement your food dollars but also see your friends,” said Paul Propson, CEO of Catholic Charities of Southeast Michigan. “Families can walk from their neighborhood to the PAL/St. Andrew’s gym, meaning more families are going to build community by seeing their neighbors and sharing a meal."

That, in turn, could lead more families to volunteer at the soup kitchen and food pantry, Propson said.

“It’s what happened at the former site, a lot of folks volunteering who are from the neighborhood,” Propson added. “People want to see their neighbors, and this great dining room at St. Andrew’s gym will be a new space to gather in the community.”

Volunteers from All Saints' Fort Street location have returned to kickstart the new location, which is only three miles from the original site.

“It’s been a blast calling the old volunteers, who are just stoked, very excited and extremely happy,” Allen said. “It’s rising up from the ashes. You watch the church get torn down and leveled, and it’s heartbreaking. But finding a new place that is not too far from where we were is nice. The imagery speaks to me. It shows God works in mysterious ways.” 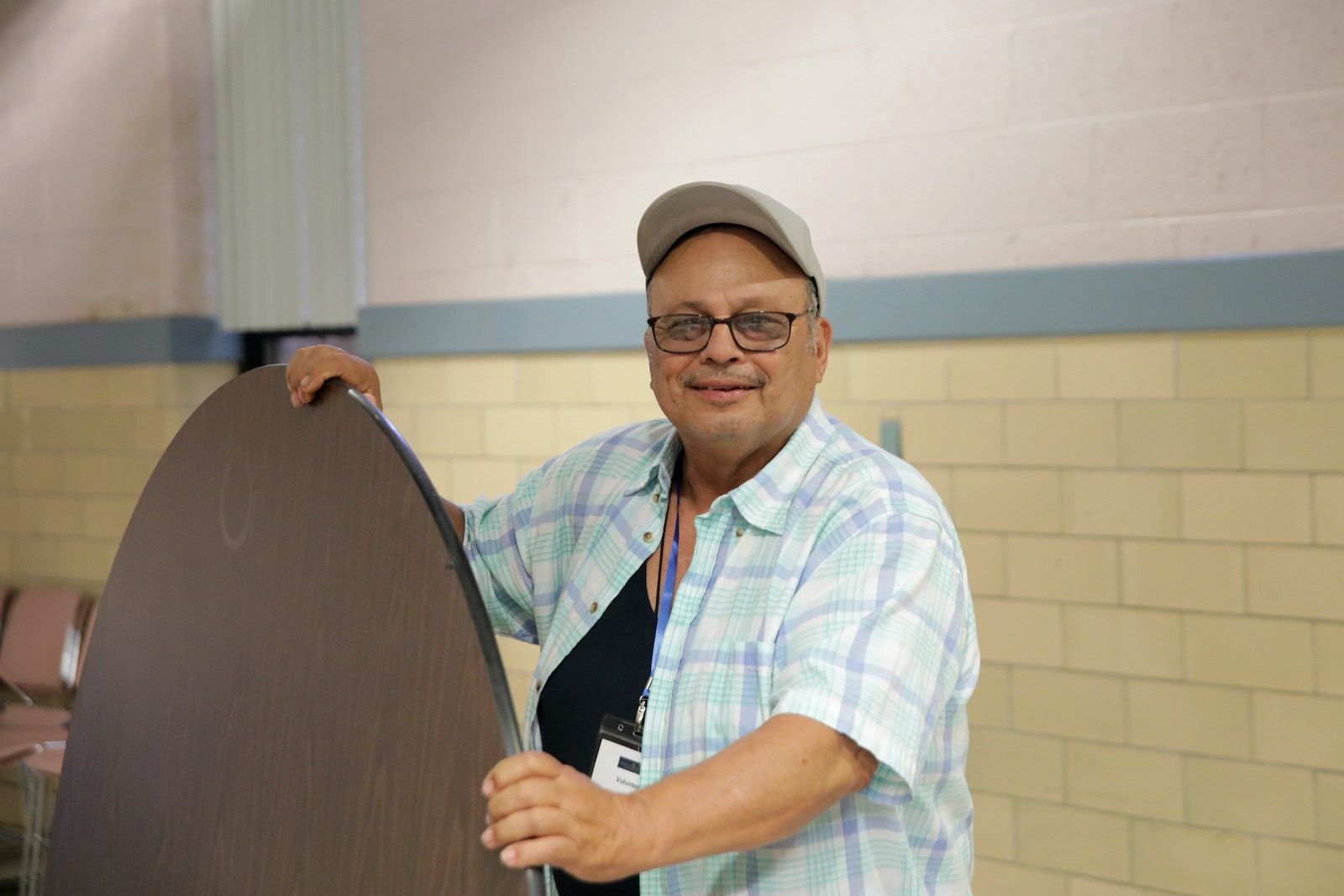 Patrick Wallace, a graduate of the former All Saints School and a former parishioner who volunteers at the soup kitchen and food pantry, said it was pivotal to the All Saints Advisory Board that the new location remain on the west side, accessible to former clients as well as volunteers who for the most part live in the Downriver, Dearborn and Plymouth-Canon areas.

“Between Catholic Charities and PAL being here and already using the gym, this opportunity opened up for us to collaborate and it was too good to pass up,” said Wallace, a member of the advisory board.

All Saints’ new location amidst a westside neighborhood means the soup kitchen and food pantry will be able to serve more families in need and expand Catholic Charities of southeast Michigan’s territorial impact in the City of Detroit, a key feature of CCSEM’s strategy moving forward, Propson said.

Propson added the reopening of All Saints is part of a holistic approach to service in the city for Catholic Charities of southeast Michigan, which operates a number of other ministries in the city.

“It means a lot to us at Catholic Charities and the Catholic community that All Saints Soup Kitchen and Food Pantry will sustain their presence on Detroit’s west side,” Propson said. “The location matters a lot to us. We now have this location as well as the Center for the Works of Mercy in the North End, and we will be having a location on the east side, which we hope to share soon.”