'And so, we process': Corpus Christi kicks off Eucharistic revival in Detroit church

DETROIT — As a procession of hundreds, led by Jesus Christ in the Eucharist, walked two miles through the streets of Detroit on the feast of Corpus Christi on Sunday, June 19, passersby stopped, cars slowed down and people came out of their homes to see what the crowd was all about.

Joanna Harris stood in front of her house on Chicago Boulevard in just her socks and reminisced to Detroit Catholic that she had been baptized at the Cathedral of the Most Blessed Sacrament, just around the corner.

She hadn’t seen anything like this before, she said, but it made her consider paying a visit to the cathedral to learn more about what she was witnessing. 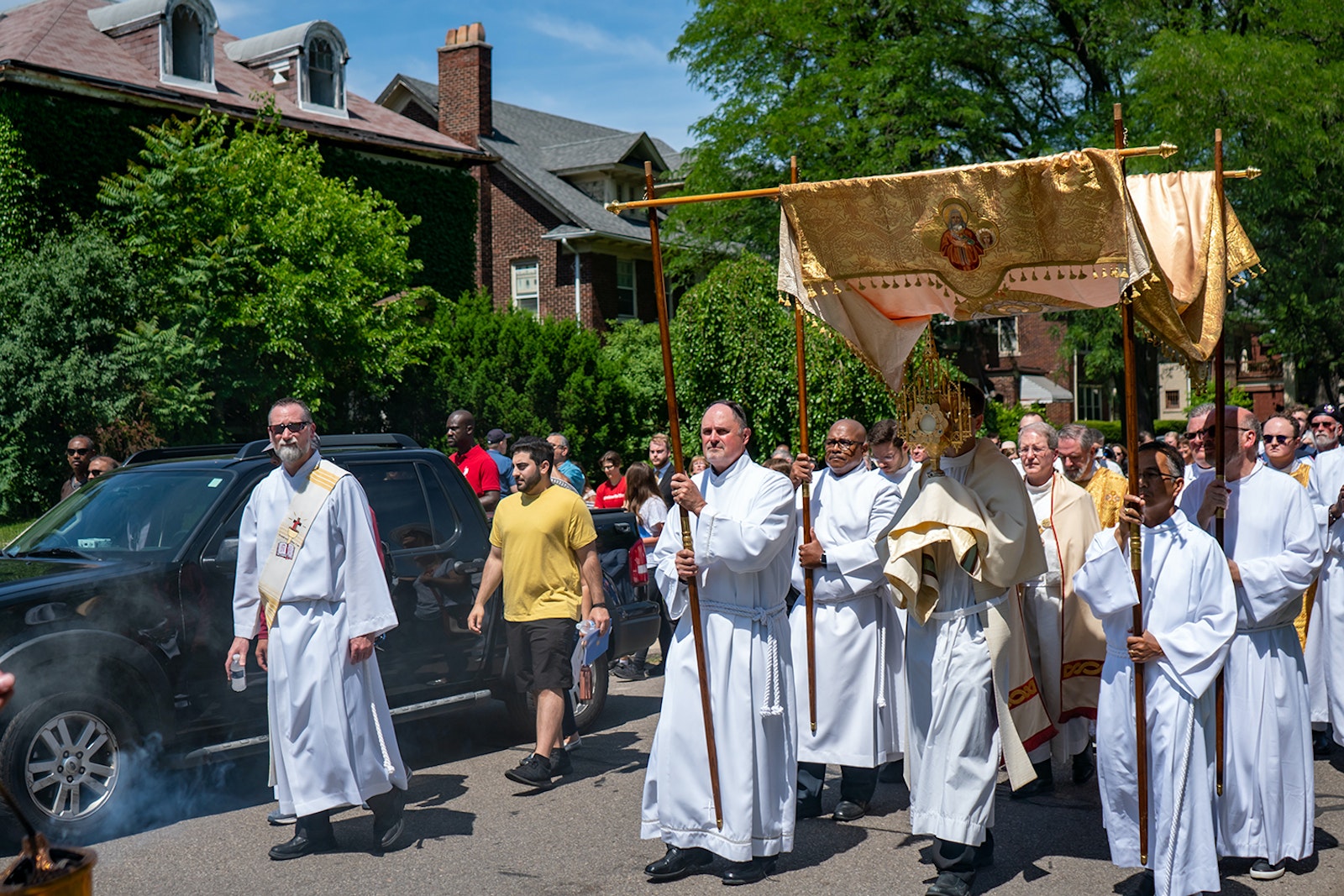 A Eucharistic procession passes by houses in the Boston-Edison district on Detroit's northwest side during the feast of Corpus Christi. Passersby knelt in adoration as Jesus in the Eucharist passed, and homeowners stood on their front lawns in awe. (Matthew Rich | Special to Detroit Catholic)

“I went in the house to tell my husband that Jesus came to get him, and they brought the whole crowd,” Harris laughed. “I think it is wonderful that you bring your church into (the neighborhoods). It needs to come back into the neighborhoods a little bit more because the neighborhoods are getting too far away from God and each other. Just regular people, we don’t love one another enough anymore. We need to go walking more often.”

Archbishop Allen H. Vigneron led the crowd in the procession from the cathedral to Sacred Heart Major Seminary, where those who participated knelt on the grass in front of the monstrance during benediction.

During his homily at the cathedral during a Mass preceding the procession, the archbishop noted reactions like Harris' are the entire point of giving witness to Jesus' presence in the Blessed Sacrament. 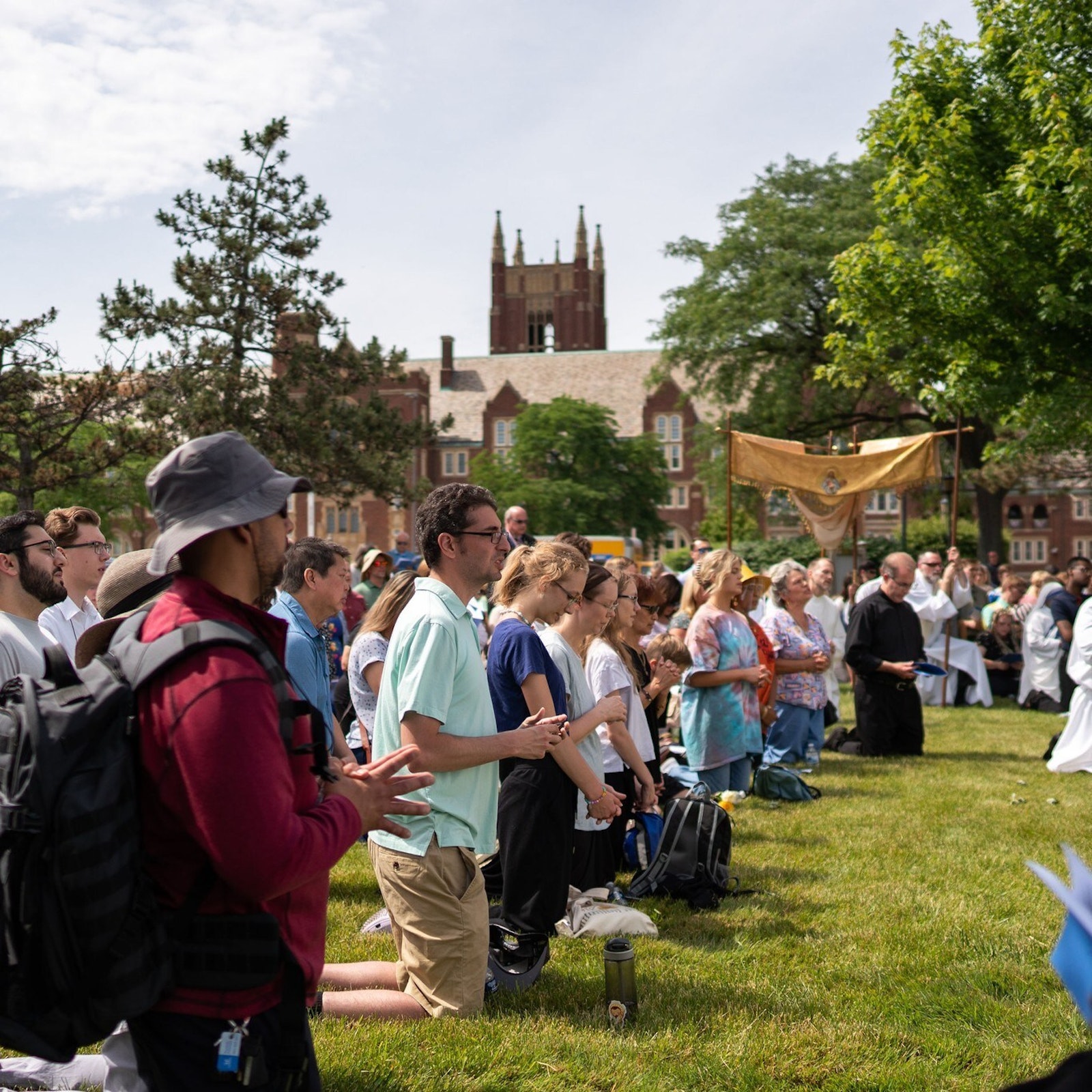 “In our public witness to the Eucharist, our profession of faith today, we invite others to come and share the Eucharist with us, to share Jesus with us,” Archbishop Vigneron said. “The gift of the Eucharist is not something to be hoarded, but for those who come to faith and communion with us in faith, it is the bread of life and the promise of the resurrection.”

By processing publicly, the faithful act as witnesses to Eucharistic faith and gratitude that God has not abandoned his children, the archbishop said.

“As Pope Francis would put it, our procession reminds us that Christ accompanies us, every hour of every day of every year of our life. And so, we process,” he said.

In addition to marking the feast day, the procession also launched the archdiocese’s participation in the National Eucharistic Revival, a three-year grassroots revival of devotion and faith in the Real Presence of Jesus in the Eucharist, spearheaded by the U.S. Conference of Catholic Bishops in response to a waning belief among Catholics. 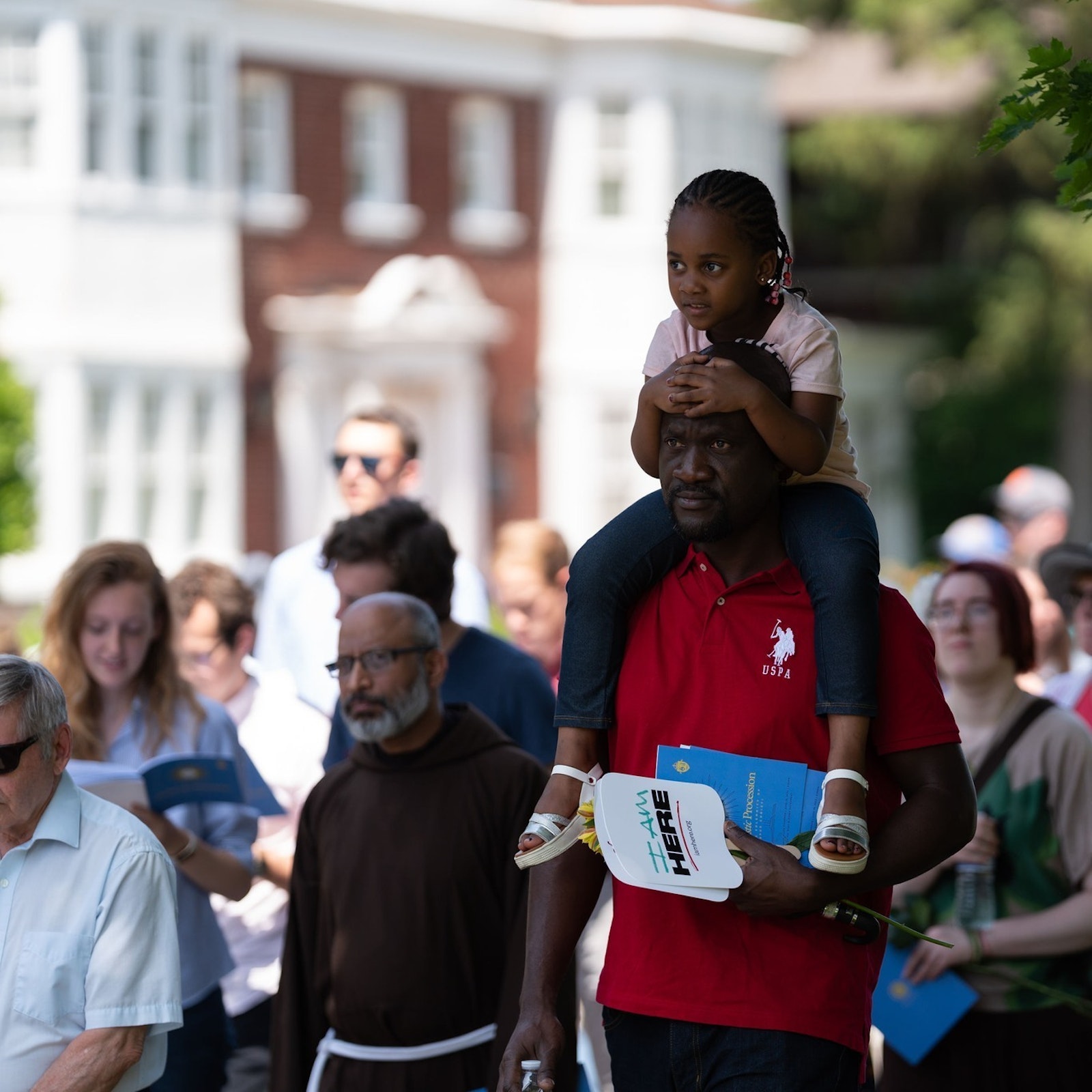 Hundreds participated in the procession, including parents with little children, religious, priests and seminarians. The three-year Eucharistic revival is an effort to spark devotion and bolster Catholics' faith in the Real Presence. (Melanie Reyes | Special to Detroit Catholic)

The three-year revival will end with a Eucharistic Congress in July 2024, the first in the United States since 1975.

The revival is a chance to renew the Church's appreciation for the Blessed Sacrament, Archbishop Vigneron said. God hears prayers, he said, if the faithful simply open their hearts to the fruits He has to offer.

The archbishop recalled the first moment he received holy Communion as a 7-year-old, and his childlike openness to the sacrament.

“I remember the zeal I had when I was just a little boy in the second grade. I think about how I have been negligent, sometimes careless, not attentive when I’ve received Communion, when I’ve offered Mass … perhaps that’s the case for you,” Archbishop Vigneron said. “But today, let us ask the Lord, all of us for each of us, that we will once again be awestruck at the mystery of the Most Blessed Sacrament and receive this holy Communion as if it were our first and perhaps our last, but always a foretaste of what God has in store for us in the banquet in heaven.” 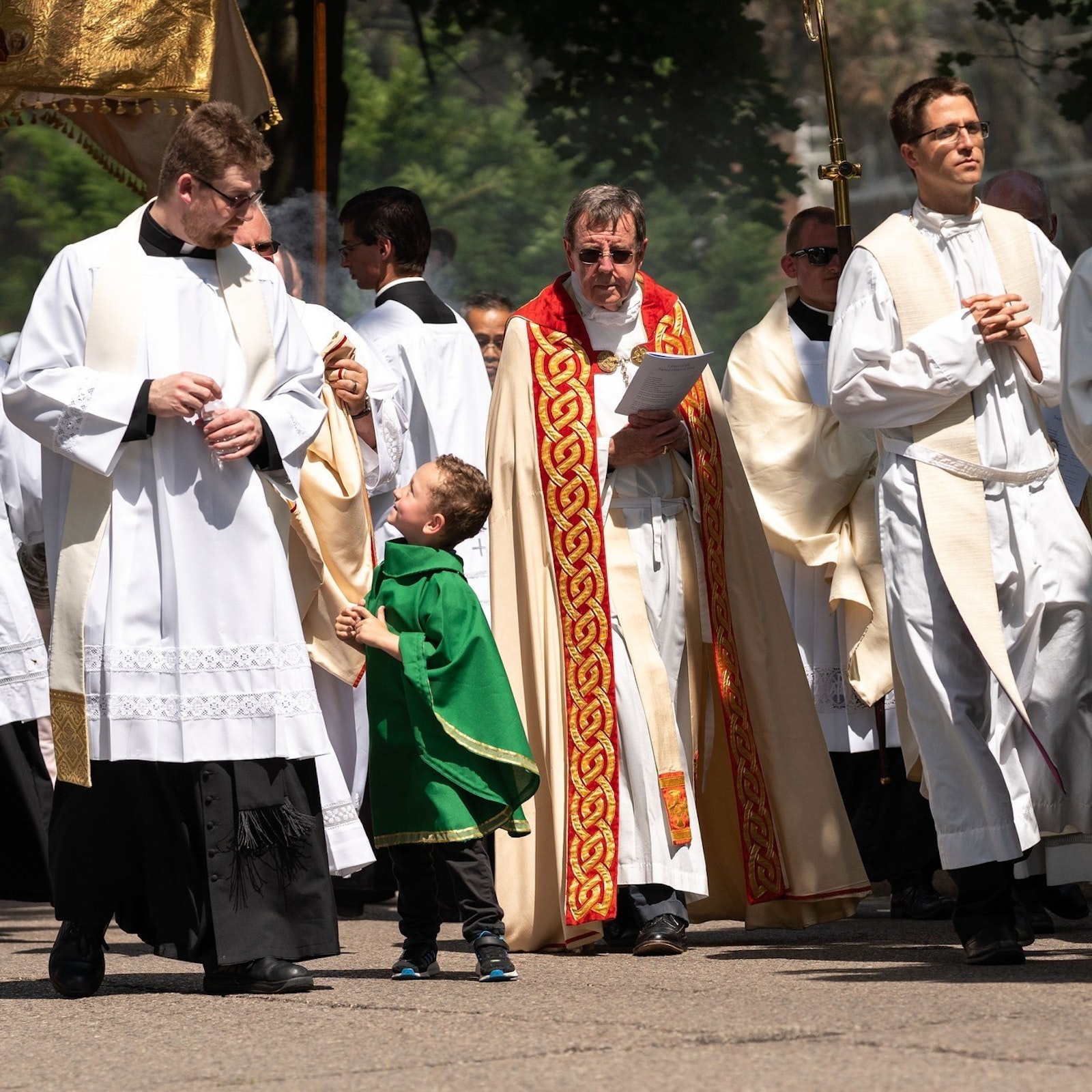 Five-year-old Lucas Mattos gets the attention of Fr. David Tomaszycki, left, as he marches at the front of the Eucharistic procession alongside Archbishop Allen H. Vigneron. Mattos wore his own priestly "vestments," a gift from his grandparents. Lucas' mother said the boy has shown an interest in the Eucharist from a young age. (Melanie Reyes | Special to Detroit Catholic)

As if hearkening back to the archbishop's homily, 5-year-old Lucas Mattos, robed in his own priestly vestments for ordinary times, enthusiastically walked at the very front of the procession alongside Christ in the Eucharist accompanied by priests, deacons and altar servers.

“He’s always been drawn to the Eucharist and the Mass,” Marie Mattos, Lucas’s mother, told Detroit Catholic. “With the Eucharist, he knows that is Jesus. He is always just wanting to be near Him. We will go and do Eucharistic adoration, and maybe we are only there for five minutes, so he goes and kisses the monstrance, and we are on our way. But he just knows.”

As he marched, Lucas held a hand fan promoting the archdiocese's I AM HERE campaign, a national effort to promote stories of the power of Eucharistic adoration.

Mattos, who attends St. Lawrence Parish in Utica, said she is floored by her son’s example and passion for the Mass and the Eucharist. 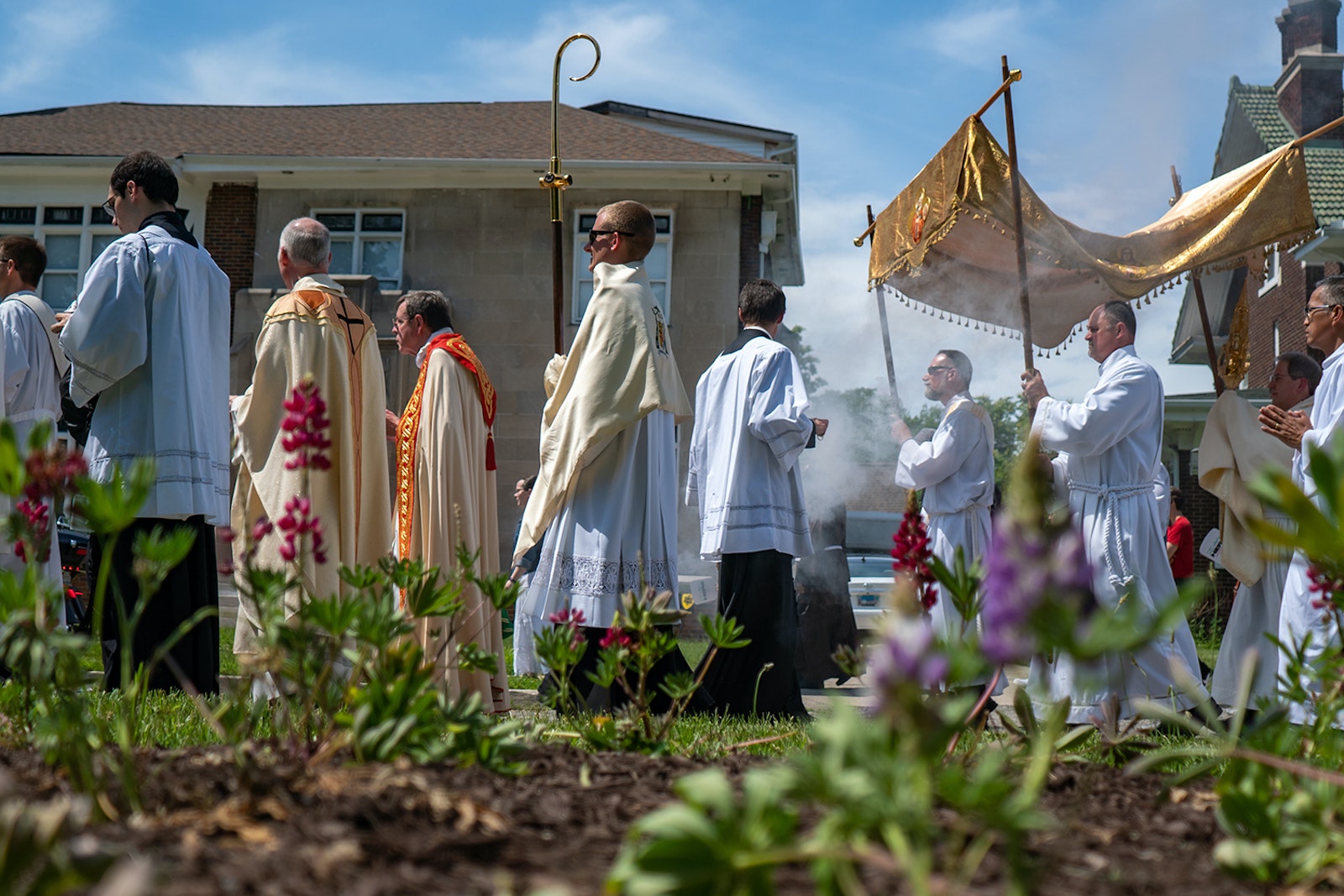 Incense rises ahead of the monstrance as Catholics march in procession with Jesus in the Eucharist along Chicago Boulevard in Detroit. (Matthew Rich | Special to Detroit Catholic)

“It is amazing to see how Jesus will just call a child,” Mattos said. “I think that is what I love about children: they are so unapologetic, and there is no angle to them. They are just like, ‘I want to be up there (with the Eucharist).’ He just went up there and stayed nearby like a little sheep.”

Lucas’s passion for the Mass and Jesus began when he was gifted a Mass kit as a toddler, Mattos said; ever since, he always wants to play Mass and looks forward to going to Mass as a family.

Lucas’s witness sets the standard for the family, Mattos added.

“I feel like in some ways I have gotten a little lazy, like when we are praying the rosary, and I am sitting on the couch, and he is kneeling on the ground,” Mattos said. “He is always setting the example — he is super serious, super focused and just how he always wants to celebrate Mass, he always wants to preach a homily.

“Every day is Jesus for him,” Mattos added. “I feel like it has been life-changing for my husband and me. ... He’s not afraid to speak Jesus to everybody. I can be shy, but he will go out and be proclaiming the word. I feel uncomfortable, but he does not. There is no shame; he just shows me to be courageous and not afraid to preach Jesus because people need to hear that.”

The I AM HERE website hosts stories and accepts submissions from those wishing to share their own experiences. One story will be featured each week with a photo essay and in-depth, first-person account of the transformational power of Christ in the Eucharist. Featured stories will be highlighted on the website and through I AM HERE social media on Instagram, Facebook, and Twitter.