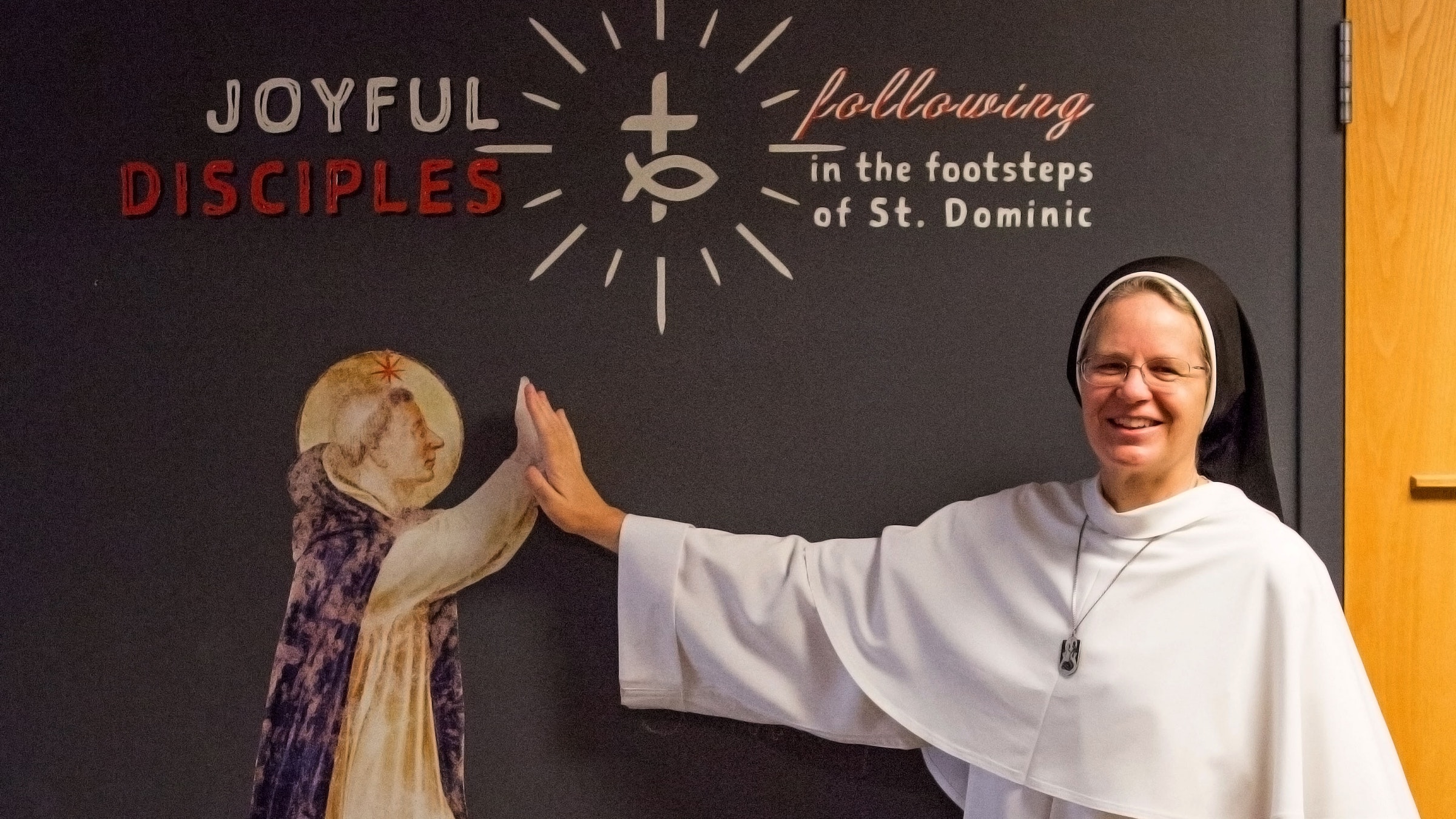 ANN ARBOR — Filled with zeal and the desire to lead all to the source of truth, St. Dominic preached and taught what he had learned in the sanctuary — lighting the way for others as they walked their paths with Christ.

Like the great 13th century saint, the Dominican Sisters of Mary, Mother of the Eucharist also seek to carry the “torch of truth” — but with the tools of the 21st century.

Over the summer, the Ann Arbor-based sisters launched an all-new digital communications and evangelization platform, called Lumen Ecclesiae Digital, to continue St. Dominic’s vision of being lumen ecclesiae (light of the church).

“Just as the early Dominicans would go to cities, universities and the public square to preach, we carry forth this light in a digital platform, which has become the new public square,” said Sr. John Dominic, co-founder of the community, which was founded in 1997 and now boasts more than 140 sisters in 30 states, with an average age of 32.

The new platform “enables us to have global reach in a way that’s consistent with our charism and our openness to say ‘yes’ to new forms of evangelization,” Sr. John Dominic said.

“It’s our responsibility to faithfully live the vows we have professed and to embody the Dominican charism. Our life of study, prayer and recollection provide balance and enable us to be integrated in mind and heart,” she said. “A zeal rooted in God’s love naturally flows as we desire to share with others the fruits of our prayer and study.”

Lumen Ecclesiae Digital (LED) is a website comprised of creative resources, stories and audio-visual content rooted in the themes of education, vocation and culture. The Sisters create the site’s content at a studio near their motherhouse in Ann Arbor, where they have access to professional equipment and other multimedia resources.

“We encourage every sister in our community to share her God-given gifts through her vocation,” Sr. John Dominic said. “This has been a blessing as we’ve been able to connect with so many people in different ways. Since the Sisters cannot be everywhere physically, thus was born Lumen Ecclesiae Digital. LED is our response to the many requests for resources and support we frequently receive.”

Behind the scenes, the new platform is maintained by a team of professionals who have extensive backgrounds in entertainment production.

“We are extremely grateful for the support and the ability to be a light in the footsteps of St. Dominic during these times — in large and small ways, day in and day out,” Sr. John Dominic said. “God has provided us with so many opportunities to be His disciples, and we want to share that joy through whatever means He provides.”

The new goLEDigital.com complements the community's two other web resources: GoLEPress.com (Lumen Ecclesiae Press), a portal that provides literary and educational resources, and SistersofMary.org, which includes information specific to the sisters' vocational life, ministry and community.

Asked about the ambitious projects, Sr. John Dominican laughed that, “God alone has the vision; we are trying to keep up.”

The Sisters have been “keeping up” in more ways than one. The community has been taking on so many new members that the order has outgrown its convent in Ann Arbor. In 2018, the sisters expanded to a second religious house in Texas, which was blessed in February.

In addition to its burgeoning numbers, the community has received national attention in recent years, including a feature with Lisa Ling on the Oprah Show, an appearance on the American Bible Challenge television game show, and a 2018 singing performance at the National Christmas Tree Lighting ceremony in Washington, D.C.

For Sr. John Dominic, the attention doesn't mean much unless the sisters can use it for God's greater glory.

“Our witness must be authentic in today’s culture as this is what attracts young women in pursuit of truth, beauty and goodness,” Sr. John Dominic said. “So if there’s an interest in our community, it must be a sign of our sincere living of this graced life. And our response is one of profound gratitude to God.”

A life of devotion to God

Sr. John Dominic was born in Berkley, Calif., and later moved to Nashville, Tenn. Her father worked in the garment business and her mother as a publicist in the country music business. She was active in sports and other social activities.

In high school, Sr. John Dominic attended St. Cecilia Academy, where she converted to Catholicism during her sophomore year. In 1982, she entered the Dominican Sisters of St. Cecilia in Nashville and studied at Aquinas College and Belmont University, earning a bachelor of science in education. In 1997, she graduated from Franciscan University of Steubenville with a master’s degree in theology and Christian ministry. She has been “happily” involved with Catholic education for more than three decades — 15 years teaching and 20 years in administration.

“Looking back, my vocation or call to belong to God began when I was a young girl — before I knew that the Catholic Church even existed,” she said. “It started with a simple childhood prayer, ‘Dear God, show me how to love you more.’ My family did not attend Church but sent me to a Christian school. Exposure to the Bible and Christian living began the inner stirrings of my heart. I did not have someone to show me the way, so the prayer remained on my lips each day.

“It wasn’t until I attended an all-girls Catholic school that I started to receive guidance and direction. Oddly enough, it came through the ‘non-Catholic’ religion classes taught by the Dominican Sisters of St. Cecilia. The truths of God’s divine revelation gradually took root in my mind and heart, and it was obvious God was showing me the way. Receiving the sacraments only deepened my desire to know, love and serve him, and I simply knew that my vocation was to enter religious life.

“My journey has not been easy and despite the hardships, misunderstandings and difficulties, I have always had a deep interior peace and a simple perspective on life — ‘Dear God, show me how to love you more.’ Guess what? He answers prayers.”