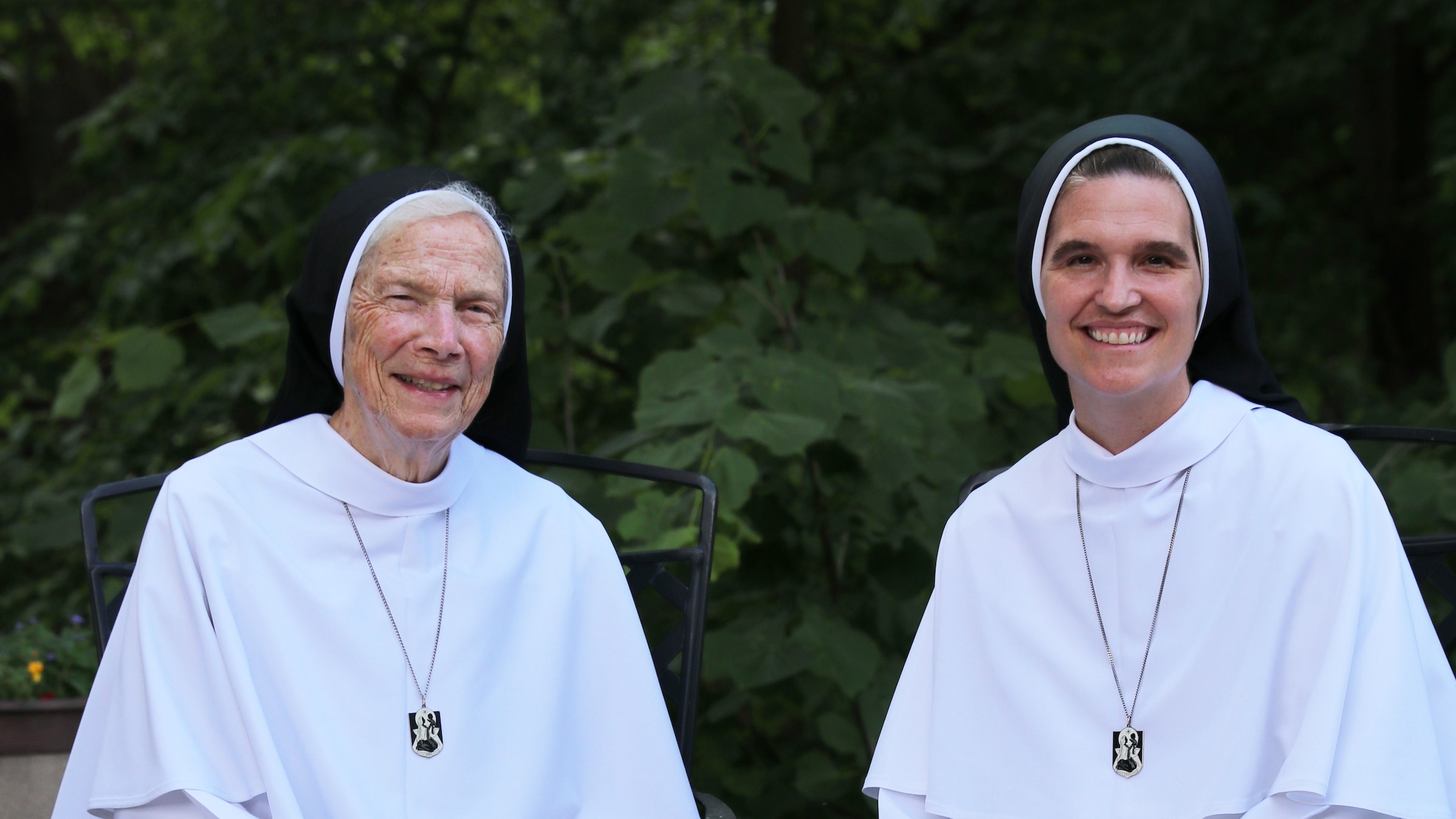 In June, Dominican Sisters of Mary, Mother of the Eucharist elected a new prioress; Mother Amata Veritas pledges to build on foundress’s zeal

ANN ARBOR — Since the Dominican Sisters of Mary, Mother of the Eucharist, were founded in Ann Arbor in 1997, the community of fresh-faced, enthusiastic young sisters have been one of the fastest-growing and vibrant religious communities in the United States.

With 155 religious women now in eight states, Washington, D.C., and Rome, the community’s Spirit-led growth has been hard not to notice.

Throughout their 24-year history, the Ann Arbor-based Dominicans have been led by Mother Mary Assumpta Long, OP, one of the congregation’s four foundresses and a driving force behind the community’s head-turning emergence.

On June 22, the Dominicans elected a new prioress general to build upon Mother Assumpta’s foundation and lead the community into the future. Mother Amata Veritas Ellenbecker, OP, began her duties immediately upon being selected during the community’s general chapter.

The sisters spent the day before the chapter in prayer and adoration, asking the Holy Spirit to guide the process. Lansing Bishop Earl Boyea offered a Votive Mass of the Holy Spirit and witnessed the elections.

Delegates were tasked with choosing the prioress general, as well as selecting a new general council and ruling on any adjustments to their constitutions, which govern the community’s way of living. This was the second general chapter for the Ann Arbor Dominicans; future chapters will be held every six years.

Speaking with Detroit Catholic, Mother Amata Veritas said she was humbled and grateful to the Holy Spirit for the trust her sisters placed in her.

She is especially grateful for the formation and leadership of Mother Assumpta and the community’s foundresses, “and for the formation I received from my family,” Mother Amata Veritas said. “Both have instilled in me a deep love of the Church, Our Lady and the Eucharist.”

Mother Amata Veritas entered the community in 2001 and made her final vows of poverty, chastity and obedience in 2009. She taught middle school and high school, and served as the community’s director of postulants for nine years. Most recently, she served the community’s mission in Houston as chancery of the Ordinariate of the Chair of Saint Peter.

“Since the elections I have begun to learn about the community in a whole new way,” Mother Amata Veritas said. “It’s one thing to be a member of the community, and it is quite different to lead it; it is the same life, but from a different perspective.”

Sr. Maria Guadalupe, OP, has known Mother Amata Veritas since day one. The two sisters entered the Dominican community in 2001, and both made their final vows together in 2009.

“I would say that from the very beginning, Mother Amata Veritas has had a zeal and enthusiasm for religious life, particularly as it is lived in our congregation,” said Sr. Maria Guadalupe, principal of St. Isaac Jogues School in St. Clair Shores. “A leader has to be an authentic believer in the mission of the organization.”

Learning from the first mother

As the new prioress general, Mother Amata Veritas plans to draw upon the example of her predecessor, Mother Assumpta, who will retain her title of “Mother” in perpetuity because of her unique role in founding the religious community.

“When you live with Mother Assumpta, you see that she leads fearlessly, and she boldly trusts in God’s providence and is open to the movement of the Holy Spirit,” Mother Amata Veritas said. “She loves the Dominican charism and has lived it faithfully for decades, and has passed it on to us by her teaching and example. Prayer and faithfulness to the Lord are the basis of everything she does.”

After leading the community for nearly 25 years, Mother Assumpta and the other three founding sisters have seen the community grow in size and scope as God has prompted them.

The order operates two thriving schools in Plymouth and Ann Arbor, Spiritus Sanctus Academies. Eighty-six sisters teach in 30 schools around the country, from elementary to university level, while 15 sisters are currently pursuing their teaching degrees. The community’s popular “Education in Virtue” program is used by schools and families across the country to foster virtue and the gifts of the Holy Spirit, and a new online portal, Openlight Media, provides multimedia content for educators, families and individuals.

“Mother Assumpta’s leadership of our community has allowed us to continue to respond to God’s call to live religious life authentically and joyfully, as we focus on Catholic education and the new evangelization,” Sr. Maria Guadalupe said. “All of this is a tremendous testimony to Mother Assumpta’s gift of self in serving as our prioress general for so many years.”

Electing a new prioress for the first time in the community’s history was a process steeped in prayer, said Sr. Catherine Marie, OP, who first met Mother Amata Veritas as a postulant, when then Sr. Amata Veritas was her director.

“When Mother Amata Veritas was announced as our new prioress general, we all knew that this was God’s generous response to our hours and months of prayer,” Sr. Catherine Marie said. “Not only has Mother served in leadership roles within the community for most of her religious life, which creates a beautiful continuity to Mother Assumpta’s leadership, but she also has the humility and docility to the Holy Spirit that is necessary to lead our community into this new phase in our history.”

While Mother Amata Veritas will spend much of her time in meetings and traveling to the Dominicans’ missions, her main role is discernment and prayer for the sisters under her care, seeking God’s will for the community.

“It’s the supernatural aspect of our life,” Sr. Maria Guadalupe said. “The so-called success of our community cannot be measured in this life because the ultimate measure of success for us is whether we make it to heaven, and how many others we bring with us.”

To that end, Mother Amata Veritas’ goals for the community are simple: she wants what God wants.

“I know that the community has a deep desire to proclaim the Gospel and work for the good of souls, and this is something that I am so excited about,” Mother Amata Veritas said. “I would like to continue to build on the solid foundation we have been given, continuing that radical openness to the movement of the Holy Spirit, to be at the service of the Church for the salvation of souls.”