Archbishop: Christ’s establishment of the Eucharist means he’s with us in pandemic 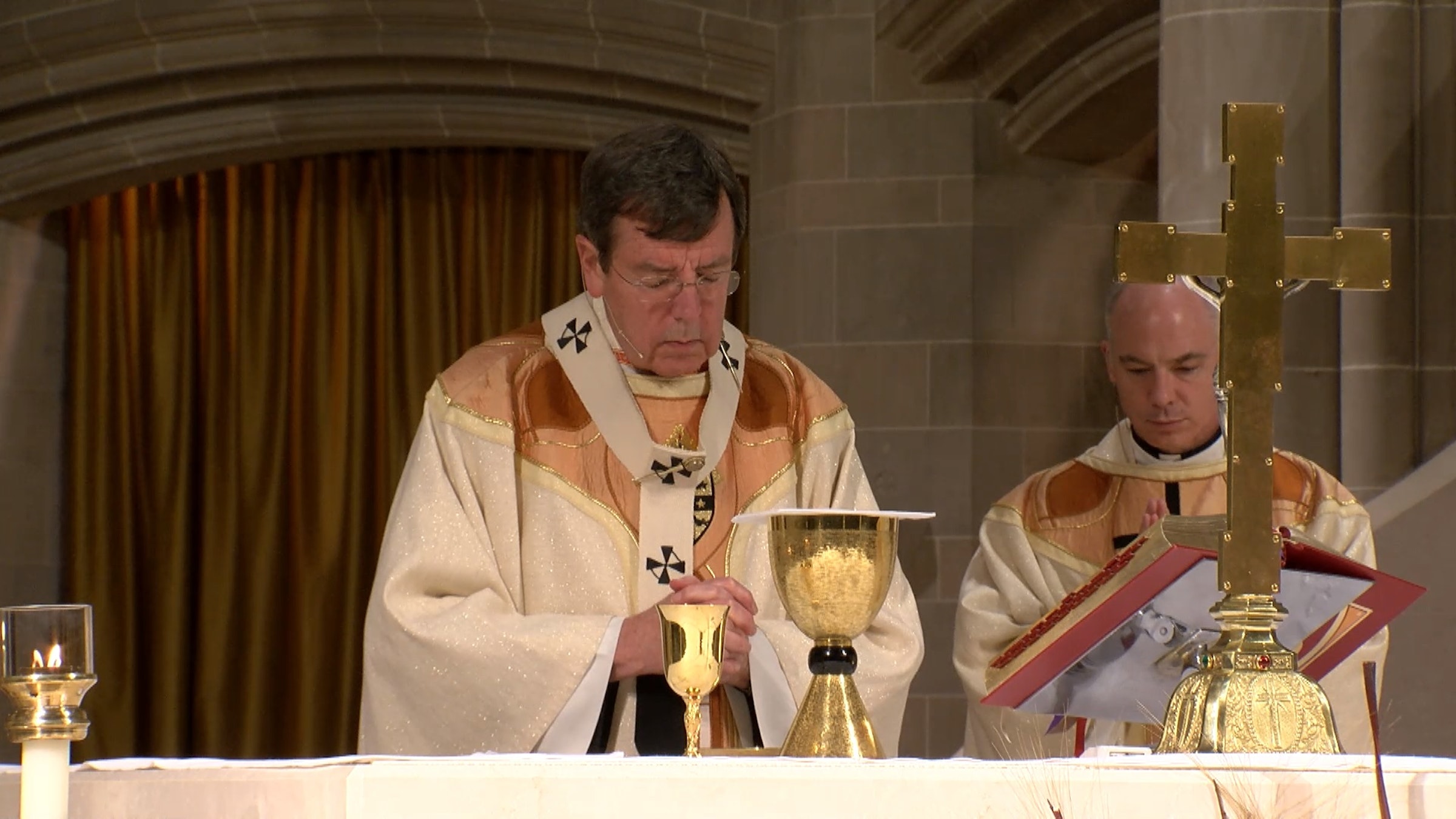 Detroit Archbishop Allen H. Vigneron celebrates the Mass of the Lord’s Supper in a near-empty Cathedral of the Most Blessed Sacrament on April 9. Despite the faithful not being in attendance, Archbishop Vigneron said through the Eucharist, the entire Church is present. (Screen grab via livestream)

DETROIT — The cathedral was empty, but with the Eucharist, the entire Church was present.

Detroit Archbishop Allen H. Vigneron celebrated the Mass of the Lord’s Supper on Holy Thursday, April 9, in an echoing Cathedral of the Most Blessed Sacrament, speaking to the entire Archdiocese of Detroit through an internet livestream about what it means to acknowledge Christ’s presence in the tabernacle through the sacrament he instituted in the Upper Room.

With social spacing because of the COVID-19 pandemic preventing family and friends from being able to gather this Easter, Archbishop Vigneron said through Christ’s Real Presence in the Eucharist, the entire Body of Christ was gathered with Jesus in the cathedral.

“This is the emphasis of Jesus Himself, when he enables the Eucharist; he points to the bread and says, ‘This is my body,’” Archbishop Vigneron said. “And the cup, this cup, is the cup of my blood. Not like my body, like my blood, but is.”

Archbishop Vigneron said when Catholics worship the Blessed Sacrament in the tabernacle, it is Jesus Christ they are worshiping — not a substitute or a symbol, but the Paschal Victim himself.

“The Holy Eucharist is always a sacrificial presence, as simple as Jesus saying, ‘my body for you, my blood shed for you,’” Archbishop Vigneron said. “This is the sacrificial reality of the Eucharist. Jesus in his sacrifice is made present once more.

“The Eucharist is a saving presence; it’s about the new covenant, the saving covenant promised by Ezekiel, Isaiah and Jeremiah — a perfect covenant, an eternal covenant, bonding the human race in the Church to the Holy Trinity, the sacrifice for the remission of our sins.”

In a time when public Mass is suspended, the ministry of the Church is disrupted because of social distancing and many families are fearing for the health of loved ones or the economic impact in a world of uncertainty, Archbishop Vigneron said the actions taken by Jesus on Holy Thursday and Good Friday have already secured man’s salvation.

Archbishop Vigneron reflected on how Jesus gave thanks to the Father during the Last Supper — knowing full well the pain and agony that was in store for him the next day.

“Even in this time of crisis — especially in this time of crisis — as our lives in so many ways seem to unravel, we’re called to participate in this Eucharistic thanksgiving of Jesus Christ,” Archbishop Vigneron said. “We’re called to renew a deeper appreciation of what the priest says always when he begin the preface, how it is right to give God thanks ‘always and everywhere.’ Even in ICU unit? Even when sheltering at home? Even when so much seem to unravel? Yes.”

As one of the most trying Lents in living memory — one that did not feature the traditional washing of the feet on Holy Thursday — draws to a close, Archbishop Vigneron said people of Christ can go forward with an unshakable confidence in God who has already won humanity salvation and has already defeated death.

“The Eucharist is the pledge, the conviction that Jesus that is with us, in us, and so with him we say thanks, tonight especially,” Archbishop Vigneron said. “We as disciples of Jesus are called to move far beyond stoic bravery. We’re called to affirm that death will not have the last word.”