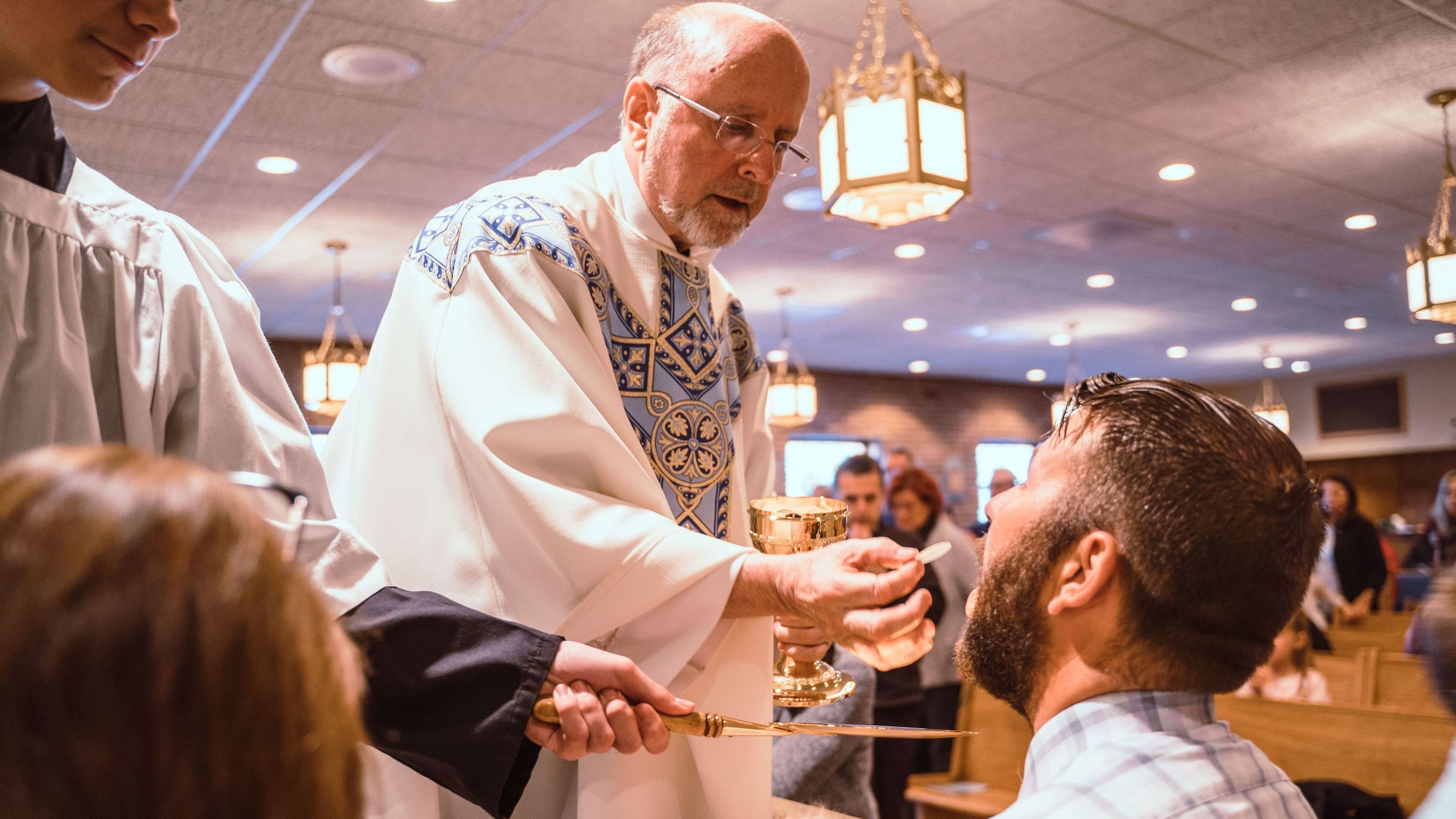 Fr. John Hedges, pastor of St. Stephen Parish in New Boston and spiritual director of the Chapel of Our Lady of Fatima in Riverview, gives Communion to a man during a May crowning celebration last year. On Oct. 6, Archbishop Allen H. Vigneron announced the chapel, which has served the faithful since 2006, will be designated as an archdiocesan shrine. (Photos by Valaurian Waller | Detroit Catholic)

Under care of the World Apostolate of Fatima, chapel has served as a ‘sacred place of pilgrimage’ and devotion to Our Lady since 2006

RIVERVIEW — A chapel dedicated to Our Lady of Fatima in Riverview will be designated as an archdiocesan shrine in recognition of its special role as a place of pilgrimage and devotion in the life of the local Church, Archbishop Allen H. Vigneron announced Oct. 6.

The Our Lady of Fatima Chapel in Riverview, which is under the care of the World Apostolate of Fatima’s Detroit Archdiocesan Division, has helped people learn, live and spread the messages of Our Lady of Fatima since it was established in 2006.

“With its designation as an archdiocesan shrine, we recognize that Our Lady of Fatima Shrine will continue its service as a sacred place of pilgrimage, a source of devotion to Our Lady of Fatima, and a welcoming place for all the faithful seeking lives of peace and holiness,” Archbishop Vigneron said.

The chapel becomes just the third campus in the Archdiocese of Detroit to be named a shrine. St. Joseph Shrine in Detroit (formerly St. Joseph Oratory) was designated in March of this year, while the National Shrine of the Little Flower Basilica in Royal Oak was designated by the U.S. Conference of Catholic Bishops in 1998.

Archbishop Vigneron made the announcement a week before the Oct. 13 anniversary of the “miracle of the sun,” which took place in Fatima, Portugal, in 1917.

During that event, more than 70,000 people witnessed a spectacular display of the sun moving and dancing in the sky, an event prophesied by Our Lady of Fatima’s appearance to three shepherd children, Lucia dos Santos and her cousins Francisco and Jacinta Marto. The miracle also confirmed the Blessed Virgin Mary’s messages to the three children, two of whom would later become saints. Lucia dos Santos, who died in 2005 after devoting her life to the messages of Our Lady of Fatima, is being considered for possible beatification.

To mark the solemn dedication, Auxiliary Bishop Gerard W. Battersby will read the archbishop’s decree and celebrate Mass at the new shrine at 7 p.m. Tuesday, Oct. 13. All are welcome, but seating will be limited and visitors will be asked to wear a mask.

“Our desire is for the faithful who visit Our Lady of Fatima Shrine to receive the same joy and spiritual blessings experienced by millions of pilgrims who visit Fatima, Portugal, each year,” said Fr. John Hedges, pastor of St. Stephen Parish in New Boston and spiritual director of the local Fatima apostolate. “We are deeply grateful to Archbishop Vigneron for establishing Our Lady of Fatima Shrine in reflection of its service as a destination site and sacred place for all those seeking a closer relationship with our Blessed Mother.”

Fr. Hedges will serve as rector of the new shrine, while the all-volunteer World Apostolate of Fatima — formerly called the Blue Army — continues to care for it.

In addition to regular Masses, rosaries and devotions, the shrine features stained-glass windows and statuary depicting Our Lady of Fatima, as well as the adjacent St. Joseph Catholic Bookstore, which offers books, Catholic devotionals and resources to help people learn about the Blessed Mother and other Catholic topics.

By virtue of the chapel’s being named a shrine, a plenary indulgence is available to the faithful who make a pilgrimage there on the feast of Our Lady of the Rosary of Fatima (Oct. 13) or the feast of SS. Jacinta and Francisco Marto (Feb. 20).

Anyone who visits the shrine throughout the year can receive a partial indulgence. The usual conditions for obtaining an indulgence include going to Mass, confession and praying for the intentions of the pope.

The World Apostolate of Fatima’s roots go back to 1947, when it was established in New Jersey as the Blue Army, whose mission was to spread devotion to the messages of Our Lady of Fatima. In 1955, Fr. George Leszczynski started the Detroit chapter at St. Andrew Parish in Detroit, where it operated until 1965.

In 1965, Fr. Edward Wilk became its second chaplain, and the apostolate moved its operations to St. Claude Parish in Clinton Township. In 1972, the Blue Army purchased the former St. Anthony Monastery at 8901 West Vernoy Highway in Detroit from the Franciscan Friars, which became the Marian Center of Detroit.

Upon Fr. Wilk’s death in 1999, Fr. Charles Farrar became its spiritual director, and Fr. Hedges took over that role in 2003.

In 2006, the Blue Army purchased a former Kingdom Hall of Jehovah’s Witnesses at 18637 Ray St. in Riverview and turned it into a chapel, adding a bookstore and a gathering space. Cardinal Adam J. Maida designated it as a private chapel on April 4, 2006, which allowed the Eucharist to be reposed there.

Since then, it has served as a place of pilgrimage and prayer for school groups, RCIA classes and parish gatherings. The shrine continues to host retreats and events with the help of a full kitchen and gathering space for lunches, dinners and a large TV screen for presentations.

Over the years, the chapel and apostolate have contributed to building up faith and devotion to Our Lady of Fatima for thousands of pilgrims, said the Detroit apostolate’s current president, Leonard St. Pierre.

“As a young man, I made a group pilgrimage to Fatima with the late priest Fr. Robert J. Fox, who was truly devoted to Our Lady and a personal friend of Sr. Lucia, one of the Fatima visionaries,” St. Pierre said. “My life was forever changed during that trip, and I became even more committed to serving Our Lady.”

Having the Riverview chapel designated as a shrine “is the accumulation of many years of prayer, hard work and a deep desire to respond to Our Lady of Fatima’s messages from heaven,” St. Pierre added.

Our Lady of Fatima Shrine

The Our Lady of Fatima Shrine is located at 18637 Ray Street in Riverview. Masses are celebrated three times per month:

Confessions and rosaries take place 30 minutes before first Friday and first Saturday Masses. The St. Joseph Bookstore is open Wednesdays and Saturdays from 11 a.m. to 4 p.m., during which time the chapel is open for private prayer with the Blessed Sacrament. For information, call (313) 320-7887 or visit fatimashrinedetroit.org.