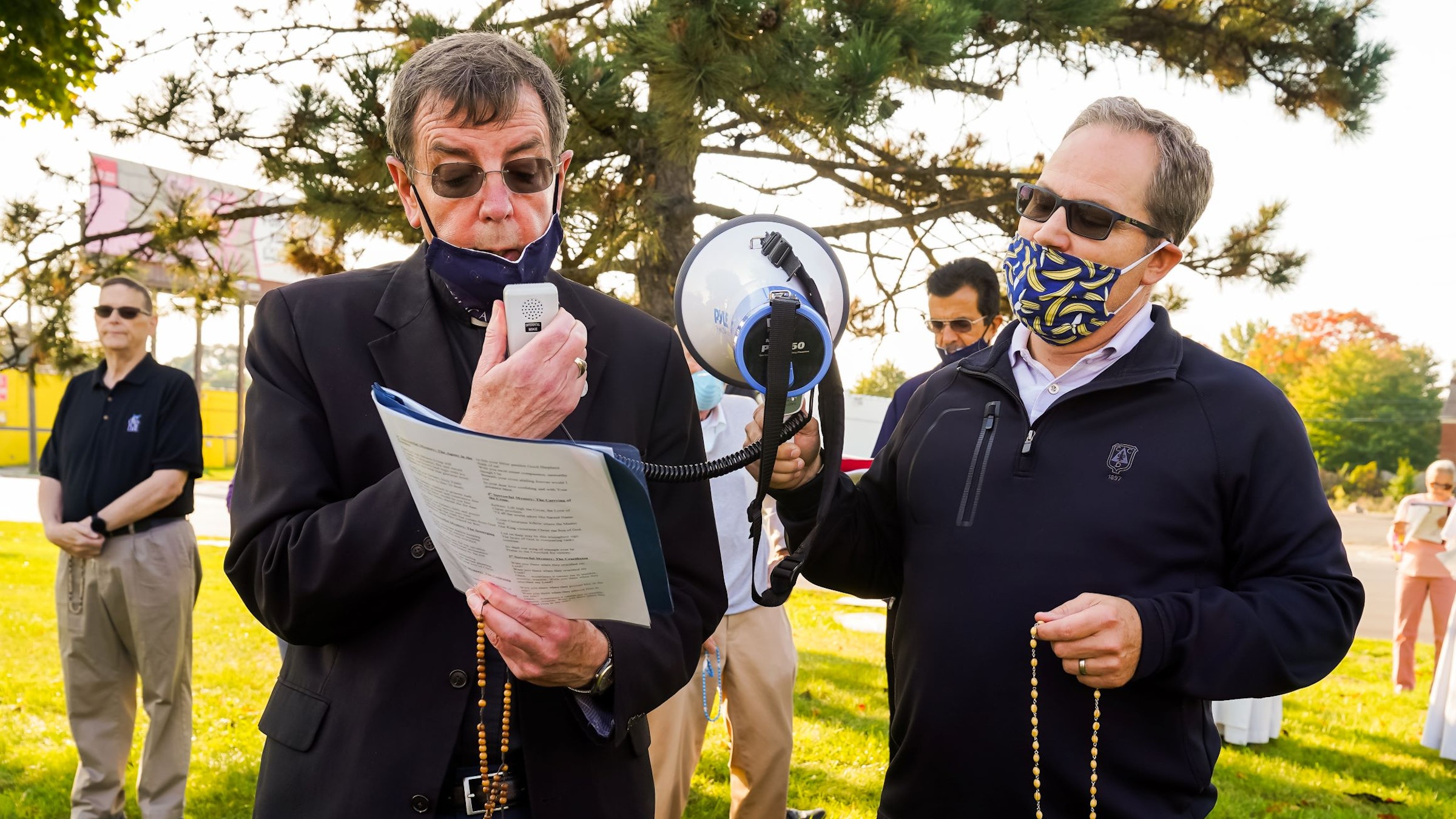 Archbishop Allen H. Vigneron leads participants in praying the rosary Sept. 26 outside the Eastland Women's Clinic, an abortion clinic on 8 Mile Road in Eastpointe just north of the Detroit city limits. The archbishop participated in the vigil, along with hundreds of others, as a way to give witness to the sanctity of life. (Photos by Valaurian Waller | Detroit Catholic)

Hundreds gather outside Eastpointe clinic to pray, give witness to God’s love and offer support and resources for expectant mothers

EASTPOINTE — Hundreds of witnesses for life gathered outside a discreet-looking building on 8 Mile on Sept. 26 to beg God for an ending to an evil that is anything but discreet.

The prayer vigil, which took place in the median across from the Eastland Women’s Clinic, an abortion clinic just north of the Detroit city limits, was joined by Archbishop Allen H. Vigneron and clergy and religious from nearby parishes, who led those gathered in praying the rosary.

“What happens today in the church and on 8 Mile is not a political, partisan act, but a religious one,” Archbishop Vigneron said during his homily at St. Basil the Great Parish in Eastpointe, where Mass was celebrated before demonstrators processed from nearby St. Veronica Parish to the clinic, reciting a rosary while walking through the neighborhood.

“Christ is here, Christ is alive, He is the victor over the evil one,” Archbishop Vigneron said. “He has performed the most marvelous of all deeds: being handed over to us men, because he had to be handed over to die to save us.”

The archbishop has participated in the prayer vigil, sponsored by Helpers of God’s Precious Infants, in past years.

As the group walked, some held pro-life banners while most recited the rosary, praying for the souls of all who worked and visited the clinic, both born and unborn.

One of those who participated in the prayer vigil was Kisha Martin, who works for Image Clear Ultrasound Detroit, a mobile clinic that parks outside abortion clinics, offering women free ultrasounds.

“It was important for me to be here today because I’m an African-American woman who has been educated on the myths that our community has been told,” Martin said. “There is an unspoken societal pressure put on African-American woman that abortion is their only option. It’s important for me to unify our community, show my support and pray for these women who need our support.”

Before the procession to the clinic, Archbishop Vigneron reflected upon the pro-life message, noting the vigil took place on the feast of SS. Cosmas and Damian, early Church martyrs who were physicians.

Archbishop Vigneron said the two saints provide an example of Christ’s loving care for the poor and most vulnerable, no matter how small, recognizing the inherent dignity in God’s creation.

Kathleen Wilson, pro-life coordinator with the Archdiocese of Detroit’s Department of Evangelization and Missionary Discipleship, said she was happy about the turnout for the prayer vigil.

“I was very grateful to witness the full church today and to see in the crowd both longtime pro-life advocates and young faces coming together to pray alongside our archbishop,” Wilson said. “In his clear words, when we acknowledge the evil of abortion, our witness is a service to God’s word, which we offer as faith-filled citizens. Christ is conquering death this morning.”

Carolina Aguilar-Mata, a volunteer with ICU Detroit who primarily works with Hispanic women in need of support, said it’s important for pro-life organizations to show women the dignity of their unborn child and their own dignity through education and outreach.

“In total, our mobile clinic has seen 1,200 women since we started working in 2015,” Aguilar-Mata said, adding not all of the women were pregnant at the time. “We have a wonderful team of workers, who are sidewalk counselors, who take the ladies to us. Through our work, we’ve built wonderful partnerships with other pro-life organizations and pregnancy centers.”

Aguilar said the clinic’s slogan, “Sharing Jesus, saving lives and serving woman,” is reflective of the clinic’s work to share the Gospel and pray with women, caring for them as Jesus would.

Involved in pro-life work since she was 16 in her native Mexico, Aguilar-Mata estimates 700 babies have been saved because of ICU Detroit’s mobile clinic.

Aguilar-Mata’s cites the Hispanic community’s devotion to Our Lady of Guadalupe, which depicts Mary as pregnant with Jesus, as a strong source of conviction for the pro-life cause, but said pro-life ministries can do more to reach out to Hispanics, starting by recruiting more Hispanic volunteers.

“Hispanics want to help; we want to protect life,” Aguilar-Mata said. “We know abortion clinics are in vulnerable parts of the city of Detroit, where African-Americans and Latinos are, so we need to work together to build teams that appeal to everyone, showing we’re all on the Lord’s team, serving God’s people.”