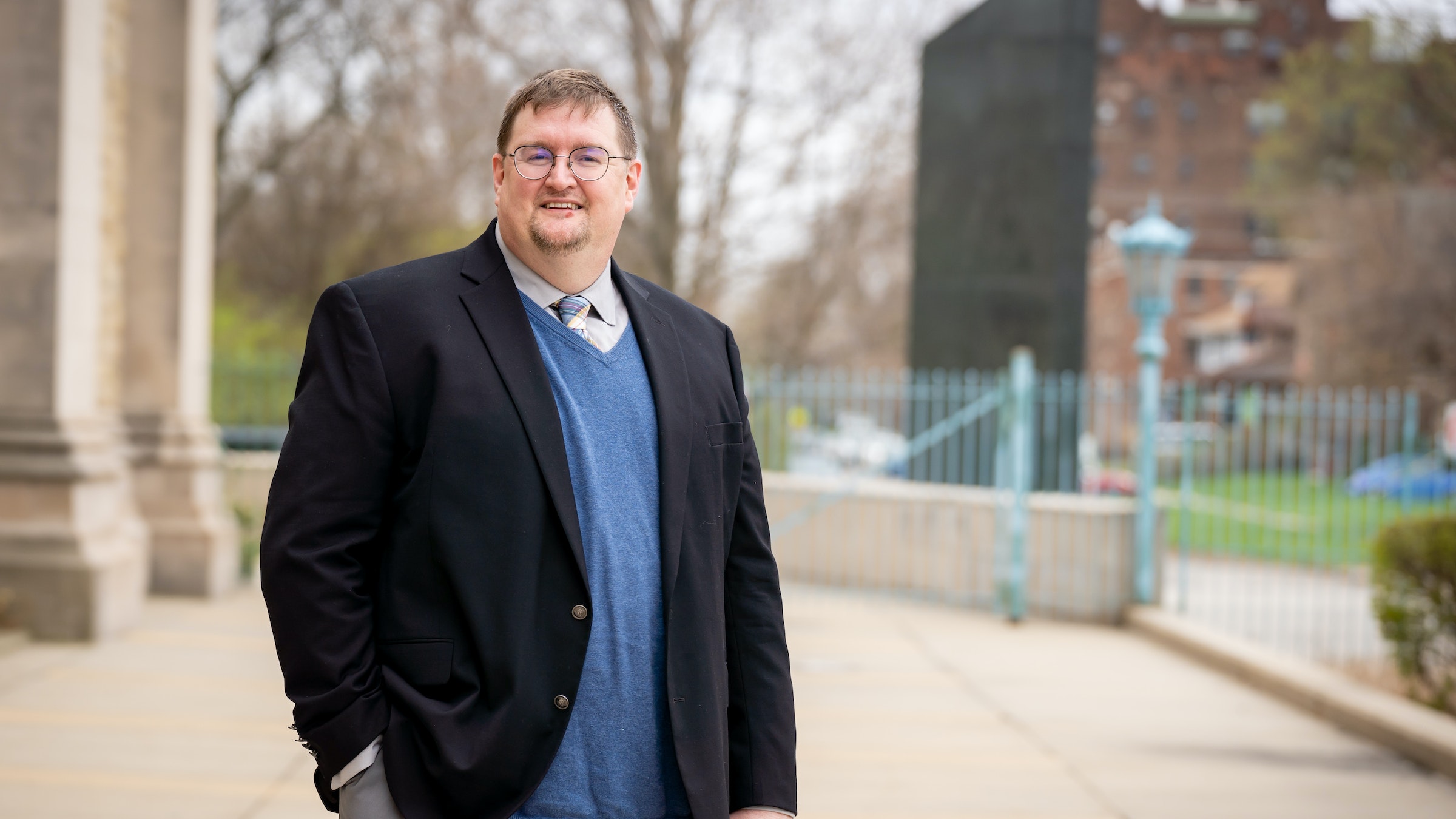 Deacon Sean Costello, currently principal at Powers Catholic High School in Flint, will become the new superintendent of Catholic schools for the Archdiocese of Detroit on July 1. Deacon Costello originally wanted to become a lawyer, but a chance opportunity as a part-time substitute teacher caused him to fall in love with Catholic education, he said. (Photos by Valaurian Waller | Detroit Catholic)

DETROIT — Deacon Sean Costello now knows God destined him to be in education, but he didn’t always know it.

The mid-Michigan native originally discerned the priesthood, then thought about becoming a lawyer, before taking a “temporary” teaching job that turned into a career promoting Catholic education.

It’s a career that has taken him through Minnesota, Wisconsin, Arizona and Michigan, and now, to the Archdiocese of Detroit as its new superintendent of Catholic schools, effective July 1.

“I am very happy to welcome Deacon Costello to the Archdiocese of Detroit as our new superintendent of Catholic schools,” Archbishop Allen H. Vigneron said a statement released April 26. “He understands that Catholic schools are an essential part of the Church’s mission, and he is eager to lead our efforts to continue the renewal of Catholic education in southeast Michigan. I am very grateful he stepped forward for this important task.”

Archbishop Vigneron introduced Deacon Costello during a makeup "Catholic Schools Week" Mass on April 27 at the Cathedral of the Most Blessed Sacrament, where he also thanked acting superintendent Laura Knaus, who will stay in the curia as associate superintendent after July 1.

“What a blessing to be called to the task of serving the people of God through Catholic schools in the Archdiocese of Detroit,” Deacon Costello said. “We know the importance that Catholic schools hold for the future of our Church. Our schools, in partnership with parents, are the best way to form the next generation of the Catholic faithful and provide an opportunity for our students to grow in love of our Lord and His Church.” 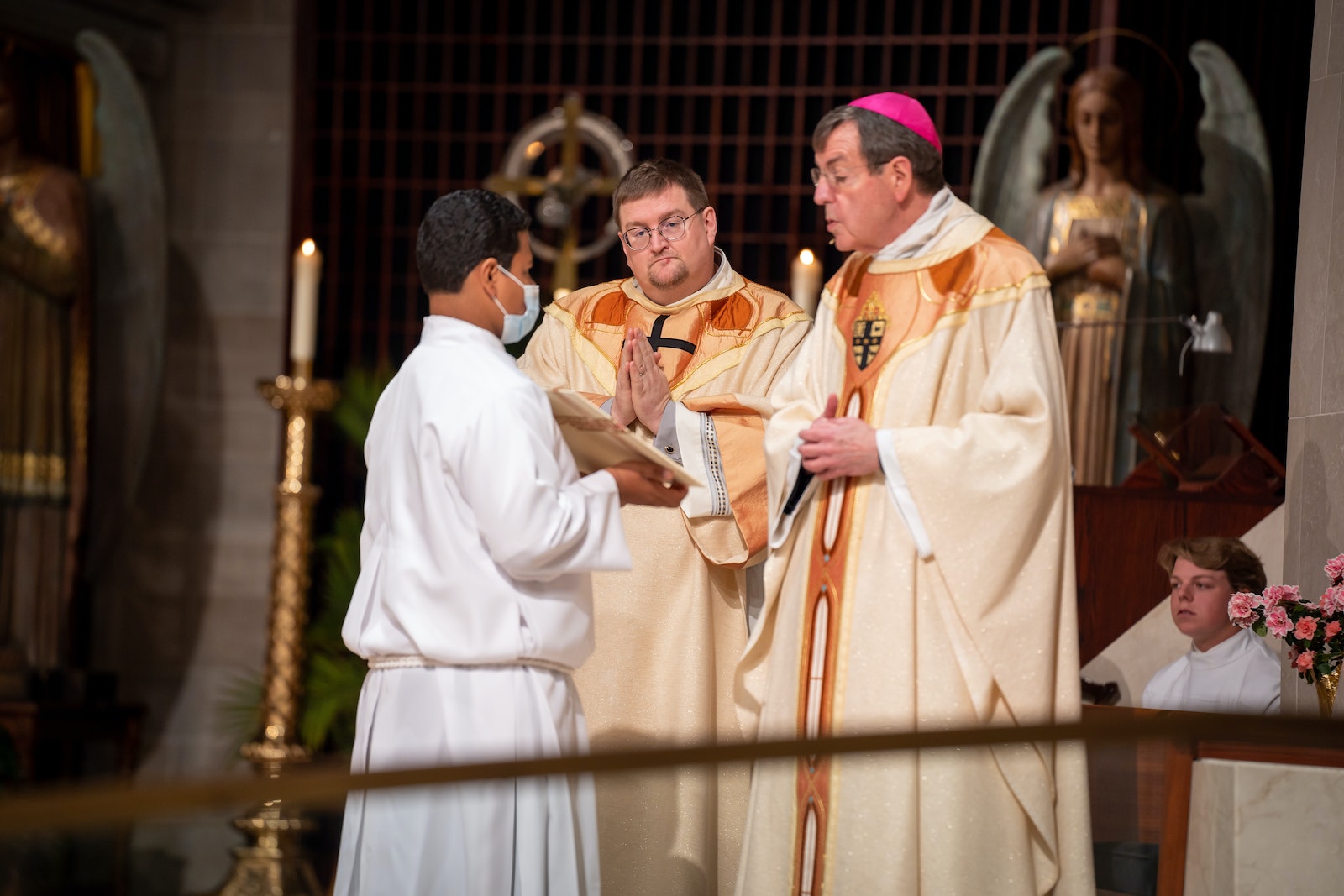 Deacon Sean Costello, center, assists Archbishop Allen H. Vigneron during a rescheduled "Catholic Schools Week" Mass on April 27 at the Cathedral of the Most Blessed Sacrament in Detroit. Archbishop Vigneron introduced Deacon Costello as the Archdiocese of Detroit's new superintendent of Catholic schools during the Mass.

Deacon Costello grew up one of 10 children on a farm in Otisville, Mich., a small town in northeast Genesee County. After graduating from nearby Lakeville High School, Costello went to the University of St. Thomas in St. Paul, Minn., to study and discern for the priesthood at St. John Vianney Seminary, located on St. Thomas’ campus.

Costello earned a bachelor’s degree in philosophy and Catholic studies and studied abroad at the Angelicum University in Rome, but it was during his discernment when he met his wife, Elisa.

Deacon Costello thought law might be in his future, and planned on attending the soon-to-be established law school at St. Thomas.

“In God’s providence, a teacher quit on the first day of school, so a friend of mine, a brand-new teacher at the school, recommend me to sub for them,” Deacon Costello told Detroit Catholic. “I needed a job while waiting for the law school to open, so I took the long-term sub job, which turned into a long-term job, and I fell in love with education ever since; I never went to law school.”

“The ability to come in and get kids excited about the content about what you were teaching, watching them grow and learn and find creative ways to get them to learn things and get them excited about it, I was just hooked,” Deacon Costello said. “Teaching is a wonderful profession; I don’t know if there is a better one. I found myself running out of time. So often in jobs — and I had a lot of jobs over the years — where you’re trying to make a buck, you're running out the clock. In education, I found it to be the opposite: there was never enough time.” 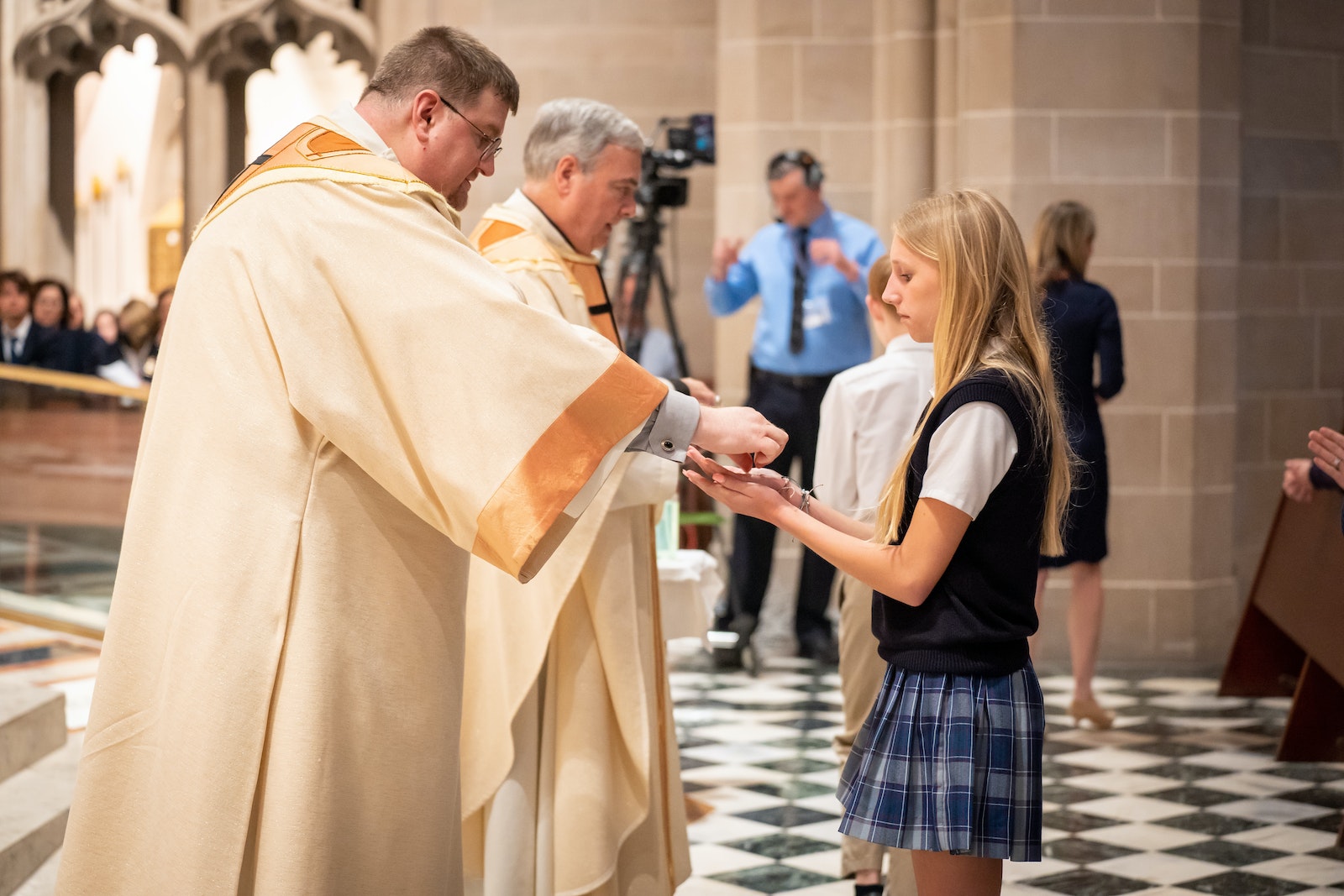 Deacon Costello offers Communion to a Catholic school student April 27 at the Cathedral of the Most Blessed Sacrament alongside Auxiliary Bishop Robert J. Fisher.

“A lot of people like to look backwards; they like to talk about how great things used to be or how now is not a great time for the Church,” Deacon Costello said. “And I beg to differ. We have a great opportunity today. We struggle with a lot of complex issues in the world, and the solutions are rarely magic tickets or simple solutions. We have to be creative. We have to think differently, and we have to ensure our solutions match the problems as we move forward.”

During the Flint water crisis of 2018, Costello became chief of staff of the newly reorganized Catholic Community of Flint, working with various parishes in the city that were being reconstituted under one pastor. In 2019, Costello was ordained a permanent deacon for the Diocese of Lansing, and was assigned to serve the Flint parishes.

But the education bug wouldn’t go away, and in July 2021, he became principal of Powers Catholic High School.

Deacon Costello and his wife, Elisa, have four children: Magdalene, 21; Timothy, 20; Annuncia, 5; and Daniel, 3. Magdalene and Timothy are both Powers Catholic alumni who now attend Grand Valley State University and the University of New Mexico, respectively.

“As a Catholic school employee, I’ve had to sacrifice greatly in order to make sure my children have these opportunities (to attend Catholic schools),” Deacon Costello said. "I went to public school many, many years ago; it's different today than it was back then.

"It’s amazing to see the war on truth that is taking place in our culture," Deacon Costello continued. "And one of the greatest battlegrounds is in schools. ... When my wife and I married, we said our vows mindful that two of those vows were, one, being open to life as God has planned, and the second to make sure our children grew up in the faith. And the very best way to do that is through a Catholic education, I’m convinced.” 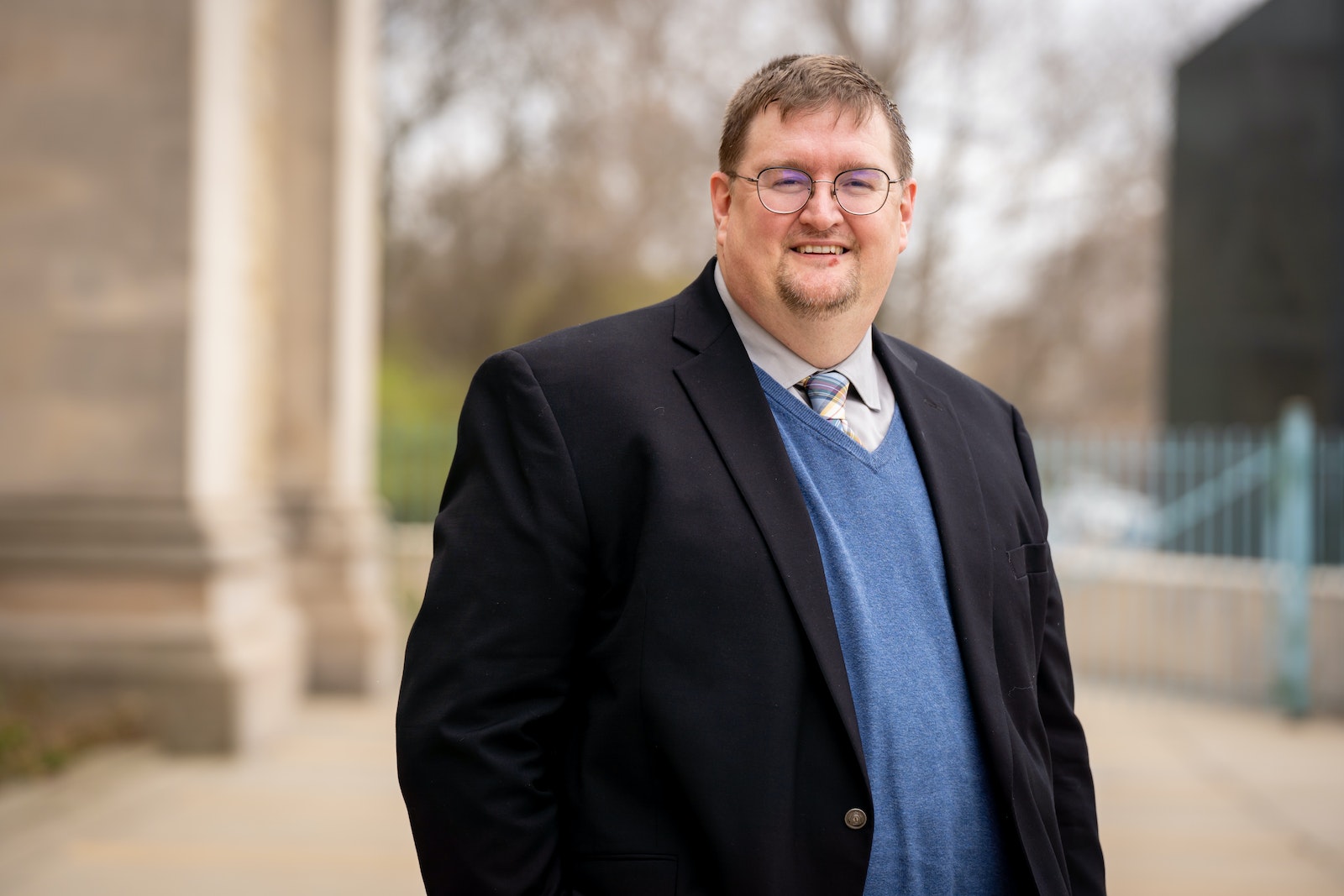 As superintendent, Deacon Costello said one of his primary goals will be finding ways to "break down barriers" between parents who want a Catholic education for their children and their ability to do so, whether those barriers be financial, educational or logistical in nature.

Understanding the challenges and often financial barriers to Catholic education, Deacon Costello sees it as his role to work with families, to accompany them in breaking down whatever obstacles might exist between their children and a good Catholic school.

“I want to ensure we’re doing everything in our power to take away those barriers,” Deacon Costello said. “If it’s a financial barrier, let's get rid of that financial barrier. If it’s a problem regarding students with special needs, let’s find ways to remove those barriers as well. We need to ensure we’re removing barriers for these parents, so no matter what choice they make, it’s going to be made with what’s best for their children at heart.”

Deacon Costello said he has read Archbishop Vigneron’s pastoral letter, “Unleash the Gospel,” and appreciates how it relays Catholic schools’ role as vehicles for evangelization, forming the next generation of Catholic men and women.

“There is a tremendous amount of knowledge and wisdom in that document,” Deacon Costello said. “Our schools are a key focal point of evangelization. Just because we have cultural Catholics in our parishes and schools, doesn’t necessarily mean we have people who are in love with Jesus. That is the goal of Catholic education to form disciples in Christ who love Jesus.”