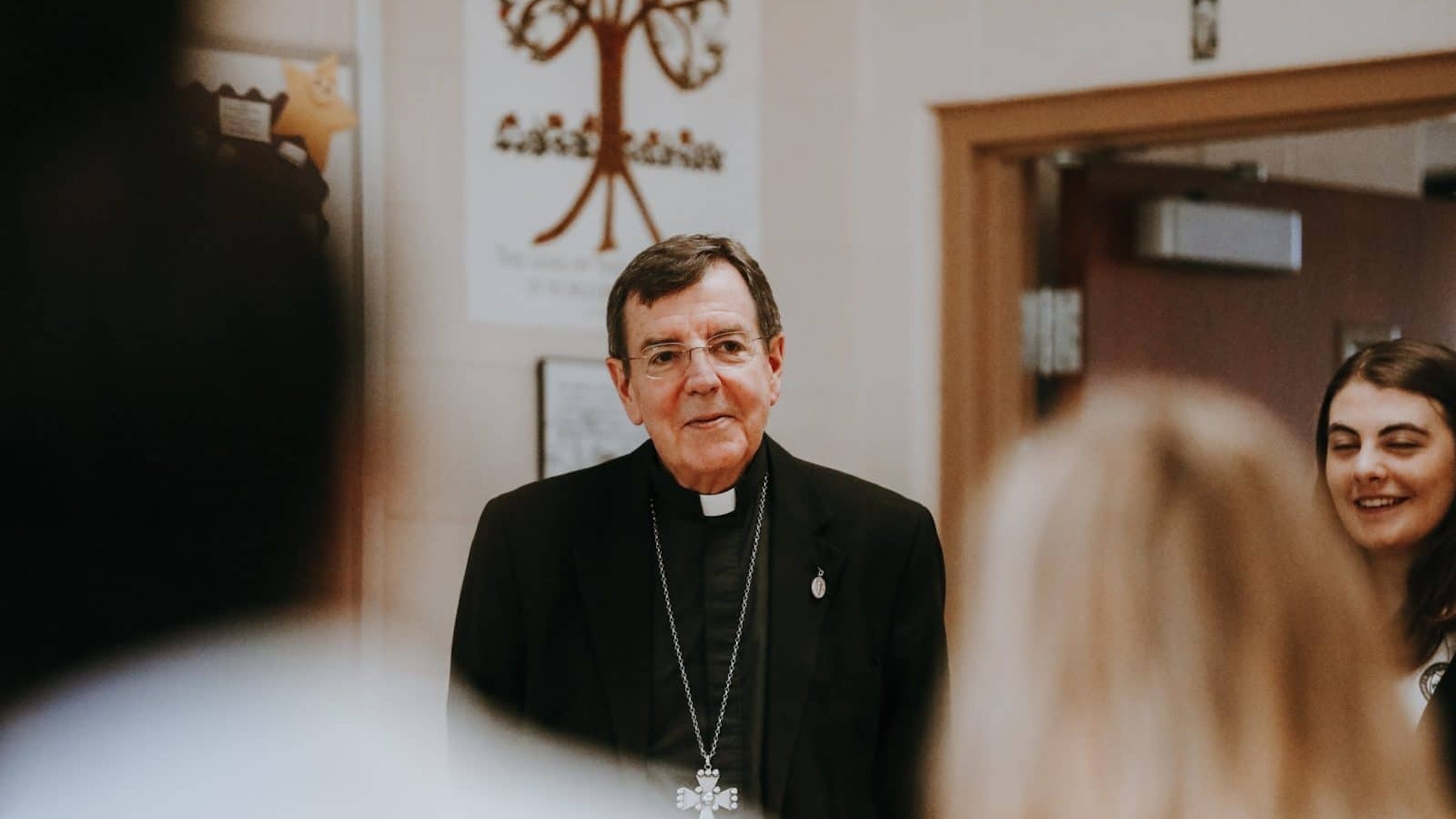 The evening included Mass celebrated by Archbishop Vigneron, followed by a networking social hour with food and beverages in the courtyard, culminating in a talk from the archbishop during which he addressed the topic of courage. His talk concluded with a Q&A session with pre-submitted questions.

"Courage is a virtue," Archbishop Vigneron explained. "The word 'virtue' is often associated in a lot of people's minds with a kind of Victorian fastidiousness, but virtue is just a word we use to translate the older philosophical term: 'arete' – the excellence. Virtues are those habits that make us able to be excellent as human beings."

Archbishop Vigneron explained that virtue is finding the middle between two extremes and knowing how to do the right thing at the right time.

The virtue of courage is essential to living well, he added.

"Courage is sometimes called fortitude; it's about knowing how to be firm in difficulty and constant and reliable while pursuing the good," Archbishop Vigneron said. "It's about having a strong resolve to resist the things that cause me to fear and the strength to overcome obstacles."

The Catechism of the Catholic Church says that the virtue of courage enables a person to conquer fear, even fear of death, and gives someone the fortitude to face trials and persecution and to sacrifice his life for a just cause, he added.

Faith is the belief that the good we seek to achieve is invincible and has made courageous martyrs throughout the church's history, the archbishop said.

"Hope makes courage possible for a Christian – (to have the) confidence that even when I am threatened, I have hope that the Lord will vindicate me," Archbishop Vigneron said.

Love is the impetus for courageous acts in the life of a Christian, he added.

"I do these things because God loves me, and I want to love Him in return," Archbishop Vigneron said. "I don't care what the price is for pursuing this good, this love."

Archbishop Vigneron said that, ultimately, courage would look different for each individual, depending on their vocation.

"Courage is going to look different when it's in the workplace – to continue to hold fast to the good when my job is threatened, or my position is threatened. Courage is going to look different in married life – when there is a problem of not enough money in the family, or a layoff, or a sick child, the diagnosis of a fatal illness – courage is required even in courtship and dating and looking for a spouse," Archbishop Vigneron said. "It will take courage to be able to face the trials that come with marriage. Courage will have a different look, a different aspect, a different kind of incarnation depending on the circumstances of somebody's life. The courage of a kindergartner is going to be very different from the courage of a senior citizen."

Archbishop Vigneron finished his talk by sharing a testimony of courage from his own life, recalling how in 1968, as he was finishing his sophomore year of theological studies in seminary, he began to have doubts and fears surrounding his own vocation.

"1968 was a very confusing time. There was the war in Vietnam; there was a revolution among the students in Paris. The world was very much changing into something that no one knew what it would be," Archbishop Vigneron explained. "And as confused as things were in the world, they were that confused in the life of the church. And I was feeling cowardly. I was feeling that this was a big pain, this confusion, this uncertainty about the future.

"What was I going to do about it," the archbishop continued. "I was very tempted to give up on my path toward the priesthood, my vocation. I was praying in the chapel, and I realized that my temptation was to be a coward. My temptation was not about cowardice in general, but it was a temptation about cowardice and my friendship with Christ. Was I willing to pay whatever the price was to be faithful to Christ and whatever he wanted? To have the courage to hold on to that friendship, even though there seems to be a cost."

Through that prayer, Archbishop Vigneron said that he recognized what was truly at stake.

"It was not just about being willing to endure. But I also saw that that's not the kind of person I wanted to be. You only can do so much with your life. You can only accomplish so many things," Archbishop Vigneron said. "And certainly, in the limited time in my life, what I would most want to have accomplished is to be faithful to Christ. That gave me the impetus to be courageous, and not at that point to decide to be a priest, but at that point, to decide to take the next step forward."

This courage is needed in his day-to-day service to the church and the faithful, the archbishop said. It helps him to look humbly at his limitations and continue to persevere.