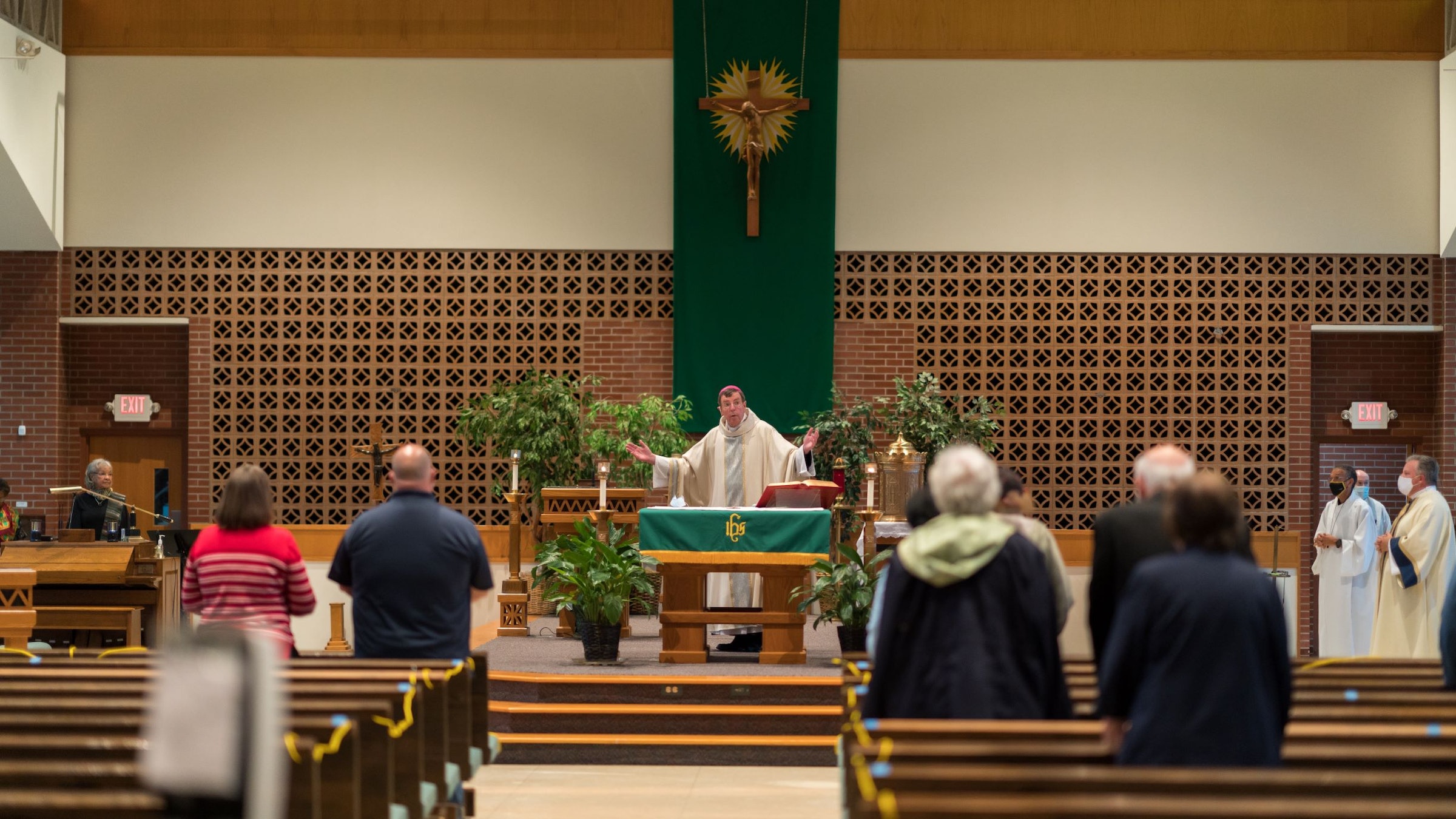 In homily delivered on the feast of St. Peter Claver, archbishop says praying to end racism part of Christ’s call to mercy, love and justice

DETROIT — On the feast of St. Peter Claver, Archbishop Allen. H. Vigneron said the Church has a duty to help “heal memories” and work toward justice with Christ’s help as she grapples with the sin of racism and division in modern times.

Celebrating a special Mass on Sept. 9 at Corpus Christi Church in northwest Detroit, the archbishop reflected on the words of the Gospel in light of the country and the Catholic Church’s reckoning with racial injustice.

The Mass included special prayers to end racism in solidarity with Catholics around the country amid the U.S. Conference of Catholic Bishops’ request that the feast of St. Peter Claver — a patron saint for African Americans, African missions and interracial justice — be used for prayer and penance toward racial healing.

Archbishop Vigneron is vice president of the U.S. bishops’ conference.

“On this occasion, in this year of grace, 2020, with our country experiencing so much contention, (we are) rightfully being called upon once again to renew our commitment as an American people that all of us are created equal and endowed with rights by our creator,” the archbishop said.

Archbishop Vigneron called on the congregation to reflect on Jesus’ words, “Whatever you did for the least brothers of mine, you did for me,” which the archbishop said exemplify God’s call for joyful missionary disciples to engage in works of justice, mercy and love.

Included in Jesus’ call to action, the archbishop said, is the work to become an ever more racially just society.

“Our efforts to eradicate racism from our community are done within the great drama of salvation history,” Archbishop Vigneron said. “What God calls us to do is to be agents within a greater drama, the drama that unfolds in the very life of Jesus our savior. What we are called upon to do is to continue the saving work of Christ. It is the work of confronting the evil one, whose design is always to seek to degrade human beings.”

Ultimately, the archbishop’s message was one of hope; Christ is already victorious over Satan, he said. Furthermore, working for the eradication of racism requires the conversion of hearts, something that takes place by the power of the Holy Spirit through the Mass.

St. Peter Claver, a 17th century Spanish Jesuit who ministered to African slaves in Grenada, became known as an apostle to the African people through his generosity of spirit, he said.

“To understand what we are engaged in and called upon to do, and what Peter Claver accomplished in his day is to be reminded that justice, as necessary as it is, will never be enough, but will always be crowned with love,” Archbishop Vigneron said. “It will require reparation; reparation for some of us to take up for acts that we did not commit, but in Christ that is how the kingdom advances because he who was sinless made reparations for us.”

The archbishop said this will require what St. John Paul II called the “healing of memories.” The Gospel does not require Christians to forget, the archbishop added, but rather to together show how bitter and painful memories can be transformed by the power of God’s grace and forgiveness.

A more modern example of someone who exemplified this message can be found in Dr. Martin Luther King Jr., the archbishop added.

“I look to him as an exemplification of the kind of attitude that we, as the disciples of Jesus, bring to this challenge of eradicating racist attitudes and behaviors,” the archbishop said. “The hope that he had was in his life expressed by nonviolence, which could only have made sense because of his confidence in the power of Jesus Christ, the resurrection of Christ, in the victory of Christ.”

“This is how the kingdom of God advances,” he continued. “So in this time, this summer of 2020, what we are about is being agents of the kingdom of Christ — agents of a new creation, and we do this with a strength and a power that is divine. It is beyond us; it is the power of Jesus Christ. And so I am happy to share this good news with you about the victory of Christ, and I hope it gives us all encouragement.”