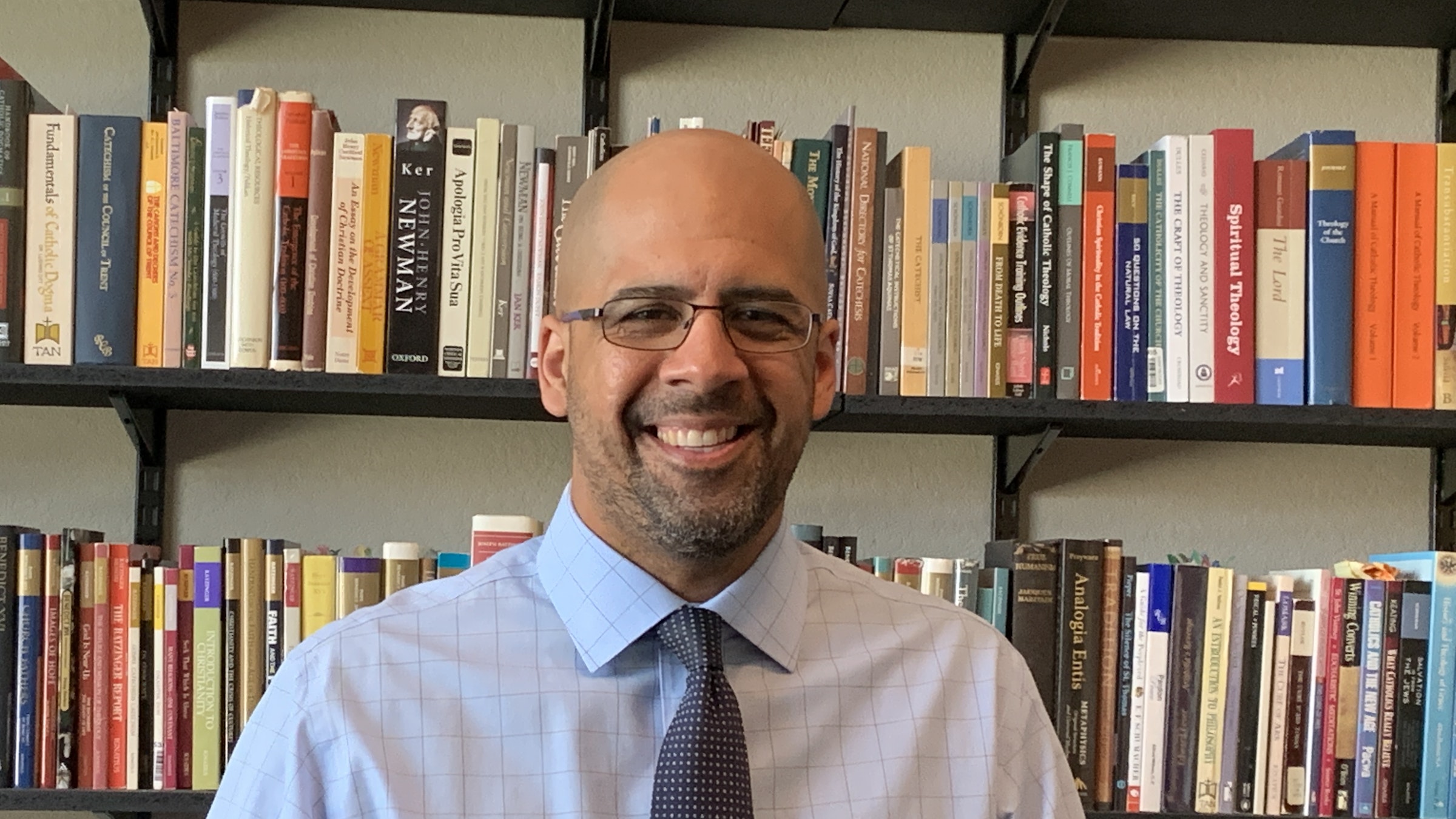 Marlon De La Torre, Ph.D., was introduced Sept. 7 as the Archdiocese of Detroit’s new director of evangelization and missionary discipleship. Based in Texas, De La Torre is currently president of the National Association of Professional Catechetical Leaders, and before that served as director of evangelization and missionary discipleship for the Diocese of Fort Worth. (Courtesy photo)

Marlon De La Torre, Ph.D., of Fort Worth, Texas, brings decades of experience, says he was inspired by Unleash the Gospel’s mission

DETROIT — Marlon De La Torre, Ph.D., is a big believer in the connection between education and Christian witness.

Specifically, he says, one can’t proclaim the Gospel if they don’t know what the Gospel says.

“If you are an effective teacher, that means you’re an effective witness of the Gospel,” De La Torre told Detroit Catholic. “You can’t be strictly an evangelist and not be able to articulate the faith in some way.”

“On behalf of the Church in Detroit, I want to extend a warm welcome to Dr. De La Torre as he joins the Archdiocese of Detroit to lead our Department of Evangelization and Missionary Discipleship,” Archbishop Allen H. Vigneron said. “I look forward to working with him as we continue to respond to the Holy Spirit’s charge to transform our community into one filled with joyful missionary disciples united in Jesus Christ.”

De La Torre, who lives in Fort Worth but will be relocating to southeast Michigan, will lead the archdiocese’s Department of Evangelization and Missionary Discipleship, which oversees the offices of Cultural Ministries, Discipleship Formation, Engagement and Family Ministries, Evangelical Charity, and Christian Worship.

“It is a great joy to share in the Lord’s work with the Catholic communities of the Archdiocese of Detroit, and I am truly humbled by Archbishop Vigneron’s trust in me to assist in the continual proclamation of the Gospel of Jesus Christ, especially through the Holy Family,” Dr. De La Torre said. “There is a sense of awe and wonder when our Lord and Savior Jesus Christ calls us to serve our fellow brothers and sisters in Christ, and even more so when the call is one you least expect.”

De La Torre’s most recent work has been as president of the National Association of Professional Catechetical Leaders, an apostolate that helps catechetical leaders, schoolteachers, administrators and those involved in evangelization and formation with training workshops, courses, webinars and meeting people in the field doing evangelization.

De La Torre said he was inspired by Archbishop Vigneron’s 2017 pastoral letter, Unleash the Gospel, and was honored to have been asked to lead the archdiocese’s missionary evangelization efforts.

“I read Unleash the Gospel and was impressed with (Archbishop Vigneron’s) approach,” De La Torre said. “The sincerity of his desire to effectively bring people back home to the Catholic Church, emphasizing the role of the family, modeled after the Holy Family, is inspiring. We have to be converted and love our Lord in both word and deed.”

De La Torre and his wife of 24 years, Amy, have four children: Miguel, 22, a seminarian for the Diocese of Fort Worth; Gabriella, 19, a sophomore at Franciscan University of Steubenville; Maria, 16, a senior in high school who plans to attend Franciscan; and Gianna, 7, who just made her first Holy Communion.

In his role with the NAPCL, De La Torre worked with multiple dioceses and ministries across the country, which gives him a unique perspective on ministry both within and outside a diocesan structure.

“When you are in a diocesan structure, you see the acute needs of a particular diocese, the direction of the archbishop, its priests, its faculty, and staff with a particular need,” De La Torre said. “Working in an apostolate, it helps you see the other side of how apostolates or ministries could be an asset to a diocese or archdiocese.”

Earlier in his career, De La Torre was an adjunct professor of catechetics for the online Catholic Distance University and Holy Trinity Seminary in Irving, Texas. He also served as superintendent of schools for the Diocese of Kansas City-St. Joseph and as principal of Sacred Heart of Jesus Catholic High School in Memphis, Tenn.

It is this educational background that sets the foundation for De La Torre’s perspective on evangelization, he said.

“When you are evangelizing, it’s not specifically a pronouncement of the Gospel of Jesus Christ, which is primary, but prior to that, you have to be an authentic witness,” De La Torre said. “You have to be prudent, calm, gentle, disciplined; all of those factors are part of being a good evangelist. And those are also traits of a good educator.”

Knowledge of the Gospels and the Catechism don’t replace authentic faith, but as an educator and evangelist, De La Torre said, it’s critical that people have both: By knowing the faith, one can live the faith. And by living they faith, they in turn teach others.

De La Torre sees his new role as empowering pastors, principals, catechetical leaders, and the laity to take ownership of the Gospel and the tenants laid out in Unleash the Gospel, specifically the proclamation of the kerygma — or basic message of salvation — and the role of the family as the primary evangelists and catechists.

“From an outsider’s perspective, those things for me were key to what any bishop or archbishop would want for his flock,” De La Torre said. “Having read Unleash the Gospel, having studied it and listening to Archbishop Vigneron face to face, it gives me a good sense of what his vision is. We want to be sound evangelists, walking side by side, guiding and serving as a resource to others.”