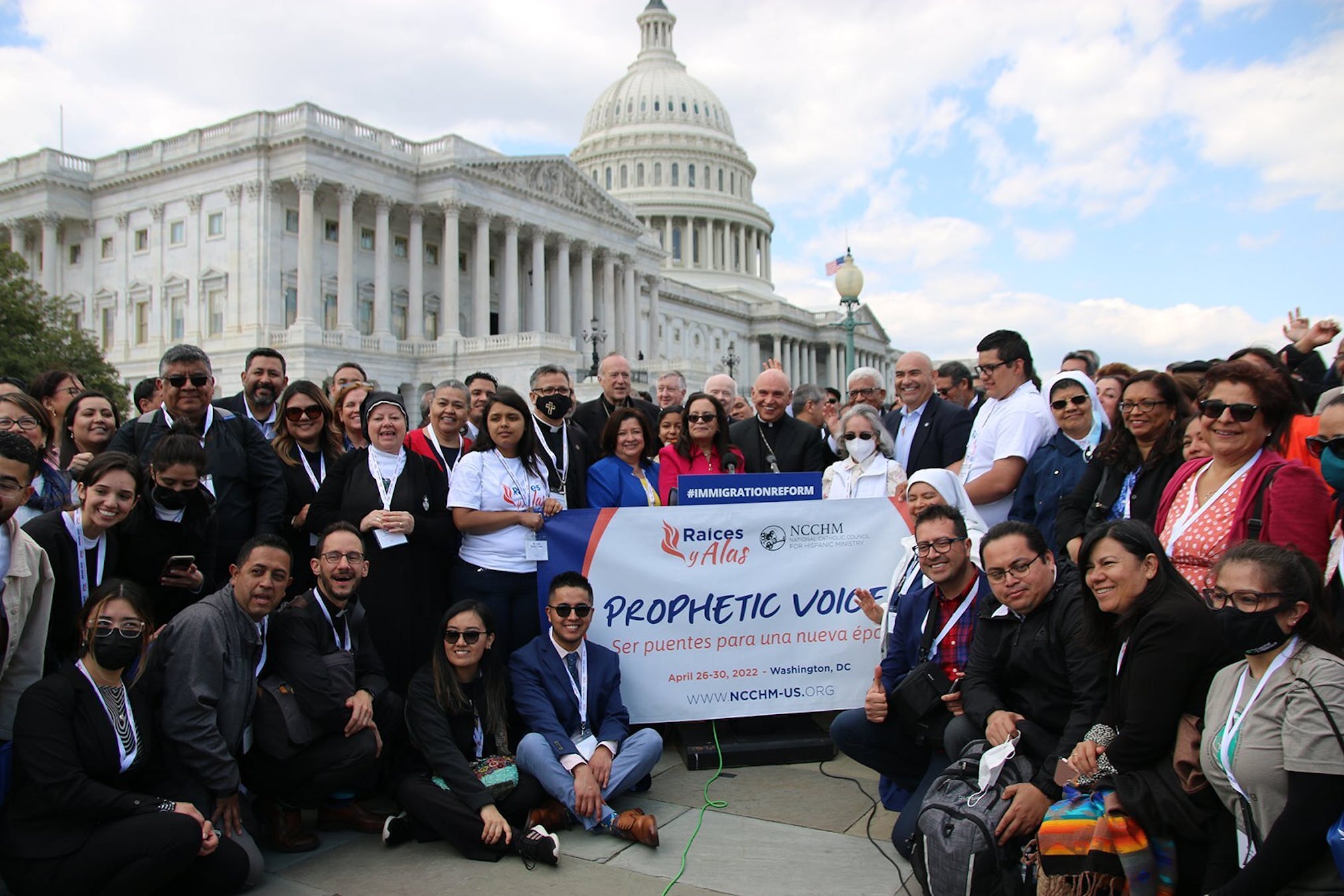 Participants of the Raices y Alas gathering are seen near the U.S. Capitol in Washington April 27, 2022. (CNS photo/Martin Soros via USCCB)

Leaders of Hispanic pastoral care institutions in the United States met in the Congress, with this year’s motto "Prophetic Voices, Being Bridges for a New Era."

On April 27, attendees met with their state representatives at the Capitol, said Elisabeth Román, coordinator of the event and president of the NCCHM. Washington Auxiliary Bishop Mario E. Dorsonville-Rodríguez, head of the Migration Committee for the U.S. Conference of Catholic Bishops, also led a prayer in front of the building, calling for a more Christian sense of the country's immigration laws.

"The event seeks to promote Hispanic pastoral ministry in the country," Román said, adding the congress is intimately united with the spirit of the synodal journey promoted by Pope Francis.

Antonio Guzmán, coordinator of Hispanic ministry for the Archdiocese of Detroit, was among young Hispanic leaders who addressed media along with Msgr. Jorge Eduardo Lozano, general secretary of the Latin American Episcopal Council and Román, organizer of Roots and Wings.

In his speech, the 28-year-old leader presented the project "The Youth Decade," which will focus on the formation of youth leadership to be introduced into ecclesial structures.

"Personally, I think that I will be able to do a better job for both the Church and society if I can work together with those who have already walked before me," Guzmán said. "We have a great responsibility as young people for the Church to continue to operate. We are a very important piece of the puzzle. You can be those new wings to advance the mission of making disciples in all nations." 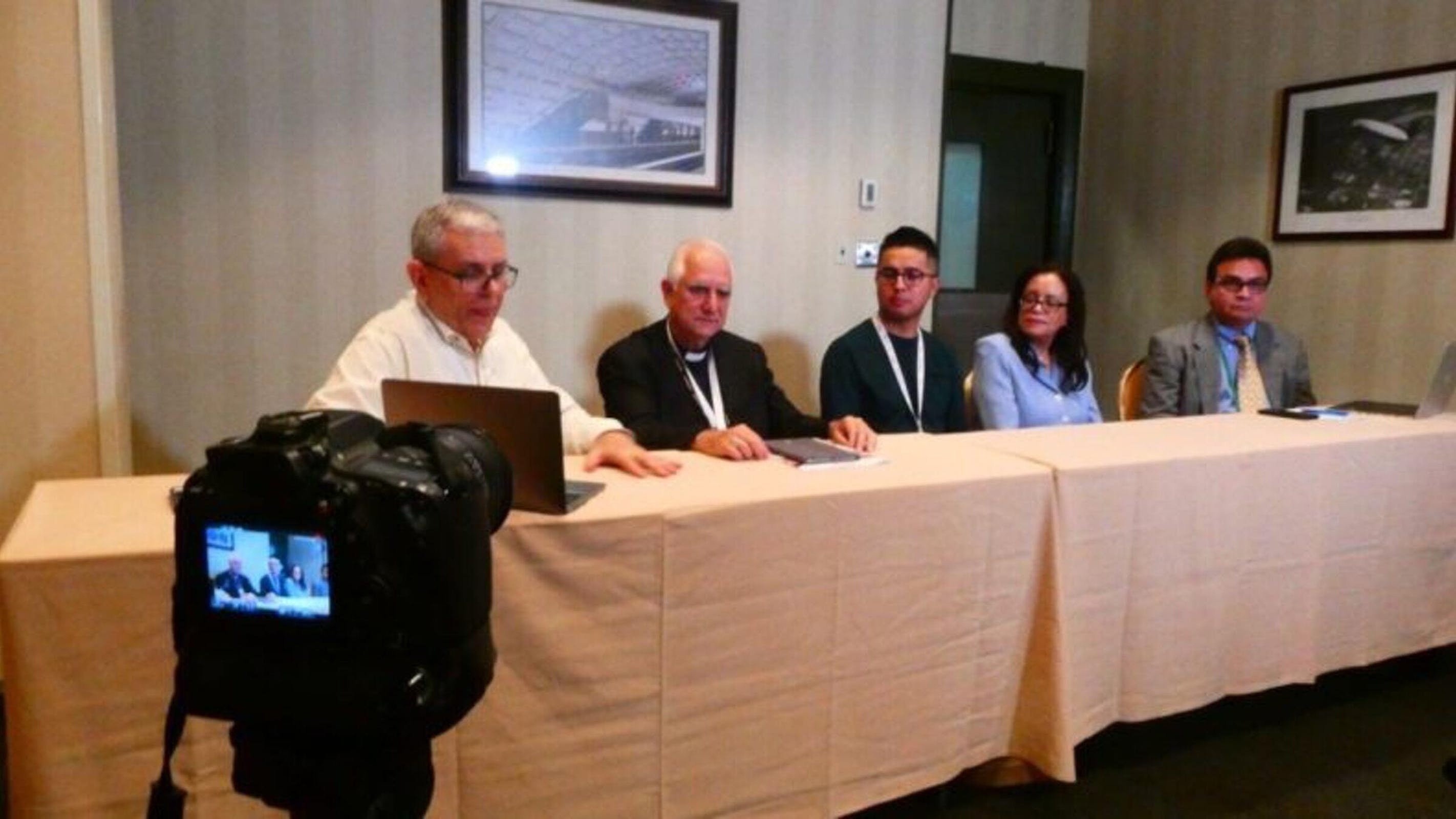 During the pandemic, for example, young people played an important part in helping the Church set up livestreams and utilize technology.

"Both roots and wings are very important," Guzmán said. "Experience is not enough without new wings. It's a relay race; you have to know how to pass on the baton so that things continue to advance, not starting again from scratch."

"Our presence here is a way to listen, encourage and be attentive to how they see the realities and challenges," because just as some Latinos arrived decades ago, "many others have just arrived and joined the Church in the United States," Archbishop Lozano said. "There are several priests from our Latin American and Caribbean countries who exercise their ministry in the United States. Some come for temporary reasons of study or work, and here they have felt their vocation and thus stay. Others have felt a missionary call to come and accompany communities."

Ecclesial collaboration has continued since the Synod of America was convened by Pope St. John Paul II more than 20 years ago, Archbishop Lozano said. That synod has spawned recurring meetings ever since.

"Every two years we have a working meeting between the Latin American Episcopal Council and USCCB, where we address particular issues related to the challenges of the continent as a whole,” he said.

The general secretary of CELAM concluded by saying, "The idea is to see how from the experiences of ecclesial faith we can help each other and how from Latin America and the Caribbean we can commit ourselves to the Church of the United States.”