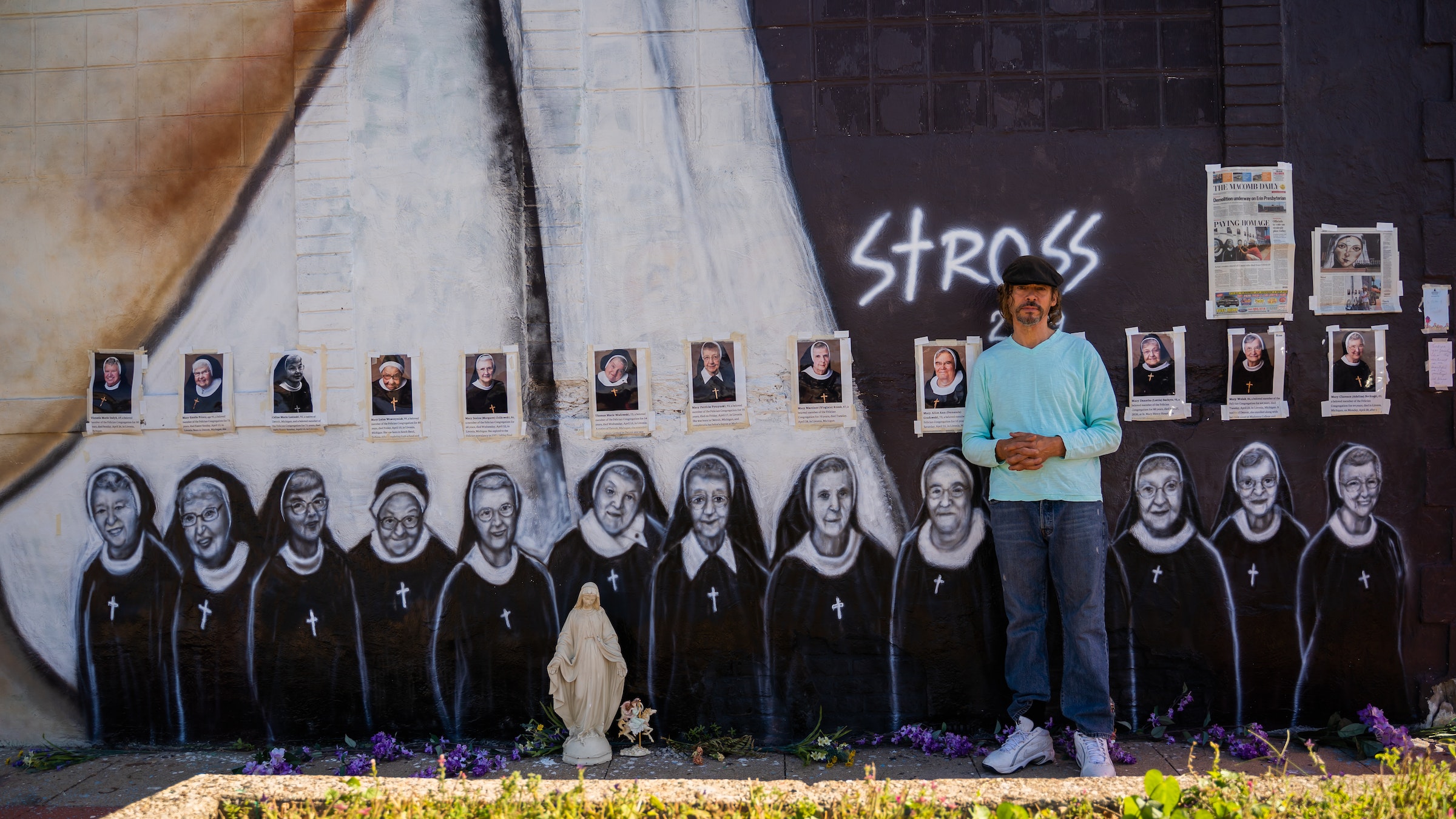 Edward Stross, a Roseville artist and owner of Gonzo Art Studio at 28305 Gratiot Ave., is putting the finishing touches on a new mural outside his studio memorializing the 13 Felician Sisters who died of COVID-19 at their Livonia motherhouse this spring. The news, which made national headlines, spurred Stross to paint the mural as a way to help the community heal. (Photos by Valaurian Waller | Detroit Catholic)

ROSEVILLE — When Edward Stross learned of the 13 Felician Sisters who recently passed away in their Livonia motherhouse, he knew he had to do something.

Most of the sisters died in April and May, but news of their deaths made national headlines in July, devastating a community facing COVID-19 in isolation.

So Stross, a professional artist with his Gonzo Art Studio at 28305 Gratiot in Roseville, took up his brush and began painting.

The end result was a life-size mural of the 13 Felicians, using portraits of the nuns submitted to Stross by people who saw his idea for a mural on a Facebook post.

“I just visualized all the suffering, all the work they have done for others,” Stross told Detroit Catholic. “I understand how faithful the people are in Metro Detroit. It just seemed the appropriate thing to do, especially for the time. I didn’t think it would get this much attention.”

Stross has seen people pull to the side of the road to get a better look at the mural, recognizing the face of a former teacher or friend.

Stross attended one year at the now-shuttered St. Athanasius School in Roseville, near where he lived growing up. Stross remembers hitting home runs in his backyard, and the sisters who lived at the neighboring convent would always throw the ball back over the fence.

“Because we have a lockdown, we can’t have large groups of people, so they didn’t have the opportunity to have a proper funeral,” Stross said. “The mourning period, the funeral, is important for closure. So I painted the side of my building as a way for people to find some healing from this.”

It’s not the first religious mural Stross has painted at his studio, which sits kitty-corner from the former Sacred Heart Church in Roseville. He also painted Mother Theresa and Blessed Solanus Casey on the southeast wall of his 1871-built building.

He likes painting religious figures to complement the church in the area, but was taken aback from the attention this mural received, including an article in the Macomb Daily.

“I can’t say I expected this kind of response, but I do know people in the area are very prayerful,” Stross said. “If they recognize them, and lot of people do, they will say something.

“There was one woman driving by who pulled off to the side of the road while I was painting, and said she took care of (the sisters) for a year and recognized the photos. I want those who recognize them to get enjoyment out of seeing their faces, and the ones who don’t to ask questions, so I can tell the story of who they are and what happened.”

Stross has been working on the mural for two weeks, and he’s now putting the finishing touches on his work. Diagnosed with multiple sclerosis, he only paints early in the day or the evening, or when it’s not “terribly hot outside.”

Stross’ murals last on average about seven years, with touchups every now and then. He’s loved hearing compliments from people who knew the Felician Sisters and have stories about being in their classes.

But Stross’ highest praise came on Monday, Aug. 10, when Sr. Mary Andrew Budinski, CSSF, local superior of the Livonia convent, stopped by the studio to view the mural and tell stories about each of the Felicians depicted.

“She described each sister, their personality and in-depth background on each one of them, and that was really special,” Stross said. “You get a feeling of their personality and what they were about. Sr. Mary Andrew, she takes care of all the nuns, and when she approved of what I was doing, I felt validated that, ‘Yeah, I did this right.’”