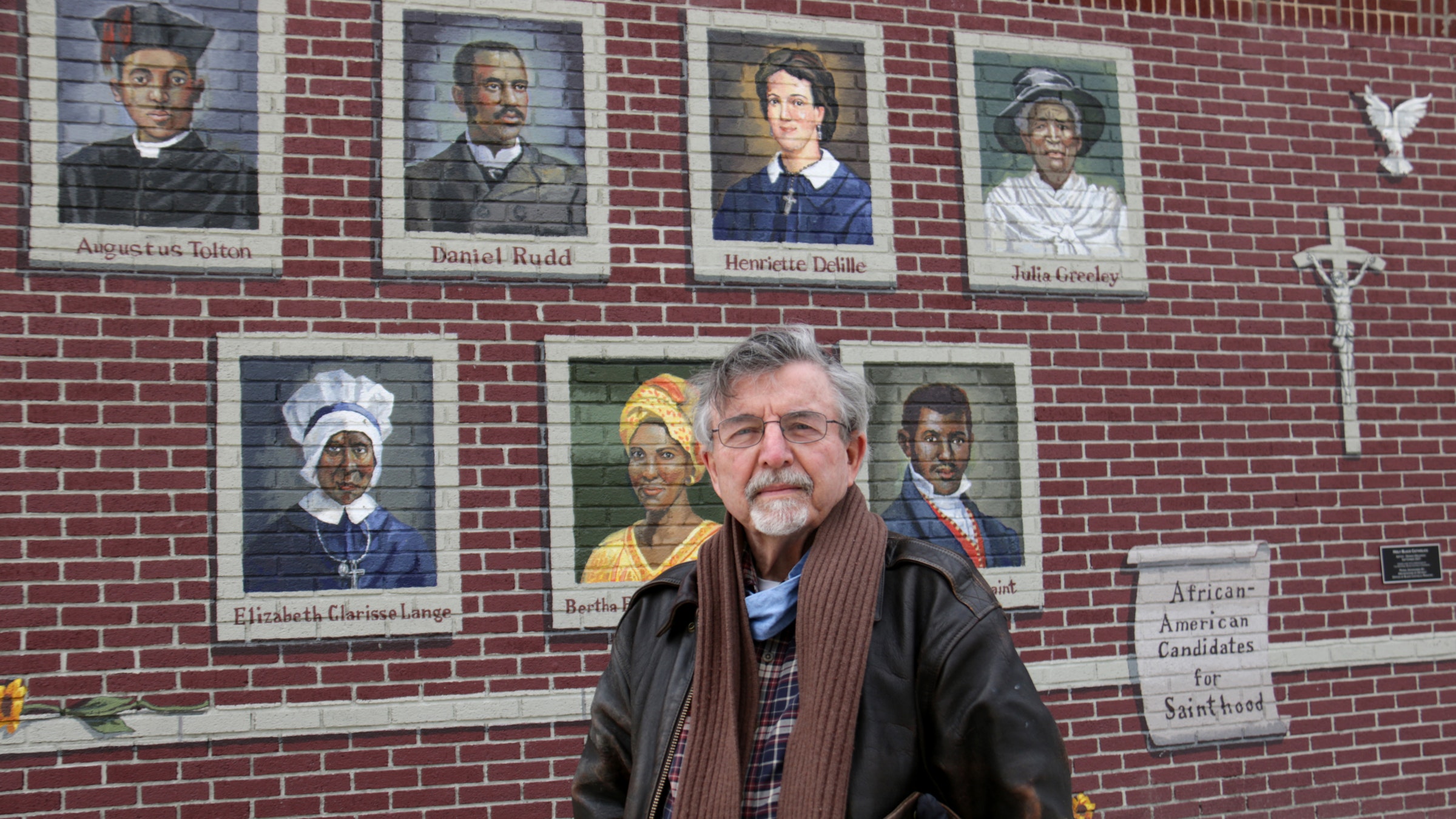 ‘The mural has a meaning behind it,’ Dennis Orlowski says about his newest work gracing Midtown Detroit's Center for the Works of Mercy

DETROIT — Dennis Orlowski admits his new mural on the side of the Center for the Works of Mercy on Woodward Avenue doesn't "knock people's hats off," but his enthusiasm for the project very well might.

Orlowski gets excited when talking about art — particularly when it's art that celebrates the community where the art dwells.

A Detroit-born muralist who has work all over the metro area — and the world — Orlowski’s latest creation is an 11-by-24-foot mural featuring six prominent Catholic African-Americans who are candidates for sainthood.

The mural was commissioned by Catholic Charities of Southeast Michigan, who operates the Center for the Works of Mercy.

“I’m happy with how it all turned out,” Orlowski told Detroit Catholic. “It’s a good area, a nice area where it all fits in. It doesn’t knock your hat off like some murals as you go down the street. I was proud of the way I painted it and the way it was finished.” 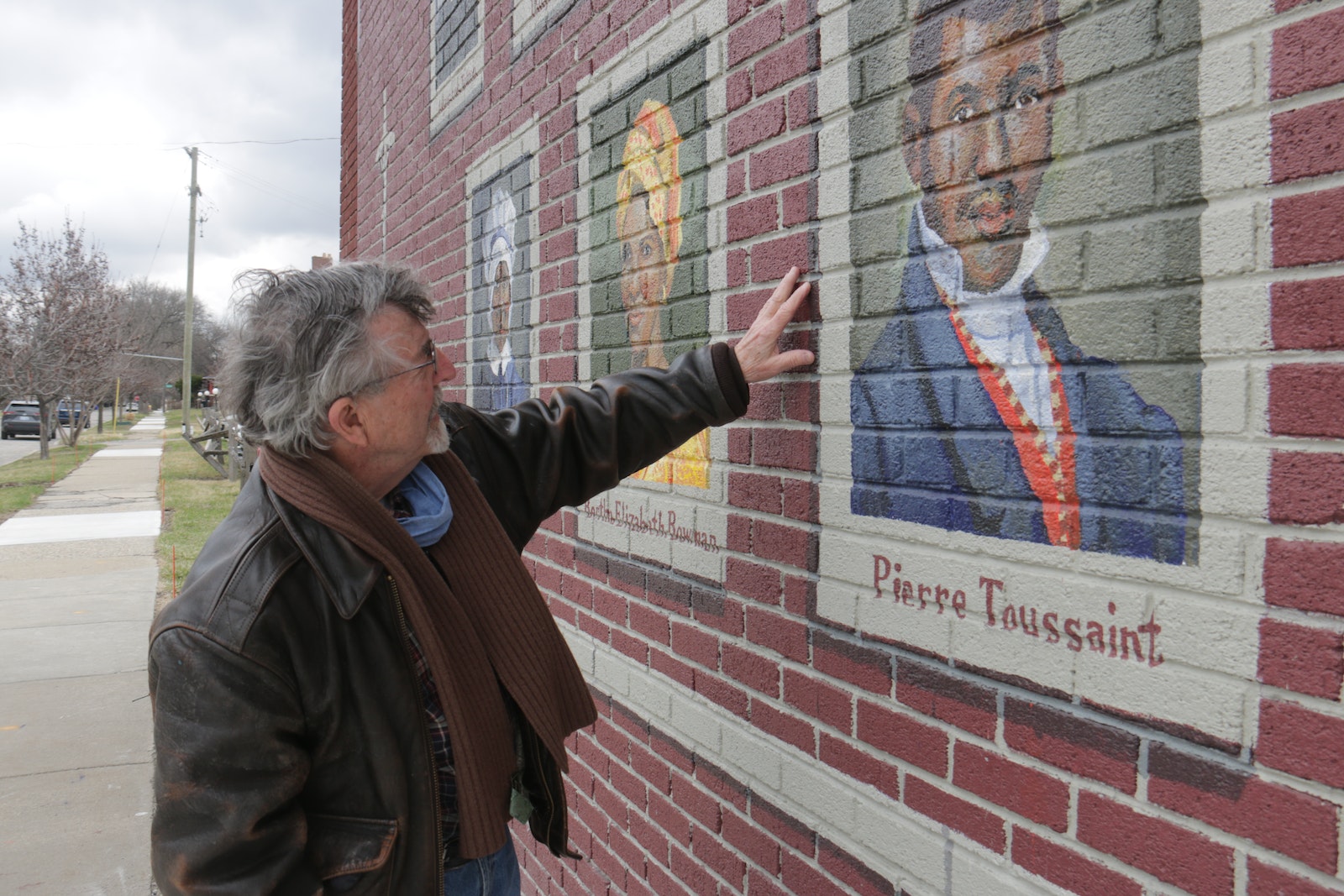 Orlowski said his newest mural was inspired by the spirit of Detroit's African-American Catholic community, which he came to appreciate after spending time teaching in Detroit Public Schools, he said. Orlowski's other works can be found in churches and public spaces throughout the city.

The mural consists of 36-by-30-inch portraits of Pierre Toussaint, Henriette DeLille, Thea Bowman, Mother Mary Lange, Julia Greeley and Fr. Augustus Tolton; the images were provided by the National Black Catholic Congress, which is promoting the causes of these six men and women. The mural also includes a portrait of Daniel Rudd, a prominent Black Catholic journalist and civil rights leader.

Beyond studying and tracing the images, Orlowski read about the six candidates, getting to know the people behind the images, the lives they lived, the experiences they had, and how those moments showed on their faces.

“They were very good people who had amazing lives,” Orlowski said. For instance, Julie Greeley, who was born into slavery in Missouri in the 1830s, “had her eye taken out by a whip, so I was conscious of making that eye a little different.”

Tracing, retracing and working to put the stenciling on the brick wall that would serve as his canvas allowed Orlowski to make each figure depicted in the mural different, each with his or her own personality coming to life.

“All faces start off the same, but then you see with the mouths, they all have a different mouth, different eyes, different features in the face,” Orlowski said. “The woman who lost her eye to a whip, you add that detail. The woman from Cuba, (Mother Mary Lange), you look at her face and you just see so much character.” 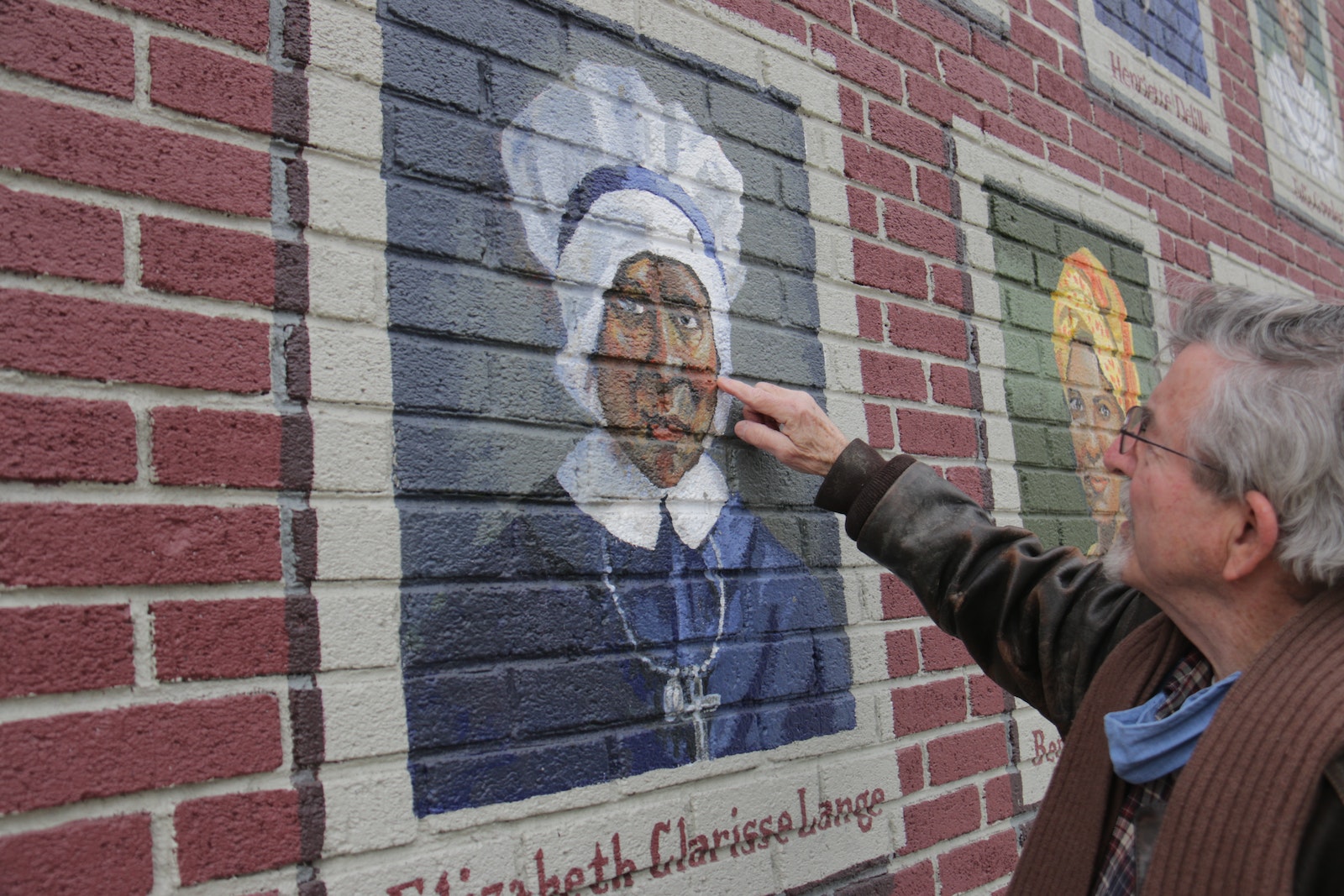 Orlowski points out details on his portrait of Mother Mary Lange, painted onto the brick façade of the Center for the Works of Mercy in Detroit.

Orlowski worked on the mural with local artist Kenneth Jackson, who assisted with the lettering of the names and detailing of the crucifix and dove on the side of the mural, while Orlowski braved the scaffolds to get the faces completed in October and November, before the winter freeze set in.

“It wasn’t until October that Catholic Charities had the wall all prepared for us,” Orlowski said. “But when I showed Adam (Perry, director of the Center for the Works of Mercy) the design and got all the pictures, we got our white, red, yellow, blue, black and ochre, each one was about $80, just to get started. We got it all done in November.”

Orlowski is a northwest Detroit native, a Cooley High School alumnus who has taught art at Cooley and Denby high schools, McFarland Elementary School and Brooks Middle School. He discovered a knack for art in elementary school and took lessons from a family friend in Hamtramck who painted at churches in the area.

After graduating high school, Orlowski took lessons at an art school in New York City near Carnegie Hall before returning to Detroit, where he painted portraits of prominent judges and officials in the area.

Orlowski later joined the Army and was sent to Bremerhaven, Germany. While being processed and designated to a unit, Orlowski said he was an artist, so the Army sent him to an armored unit in Kelheim, Germany, where he was tasked with painting signs and drawing maps.

While on leave, Orlowski visited France, Italy, Spain and England, exploring museums and studying the great artworks of the world. On base, he was tasked with painting murals for the mess halls. 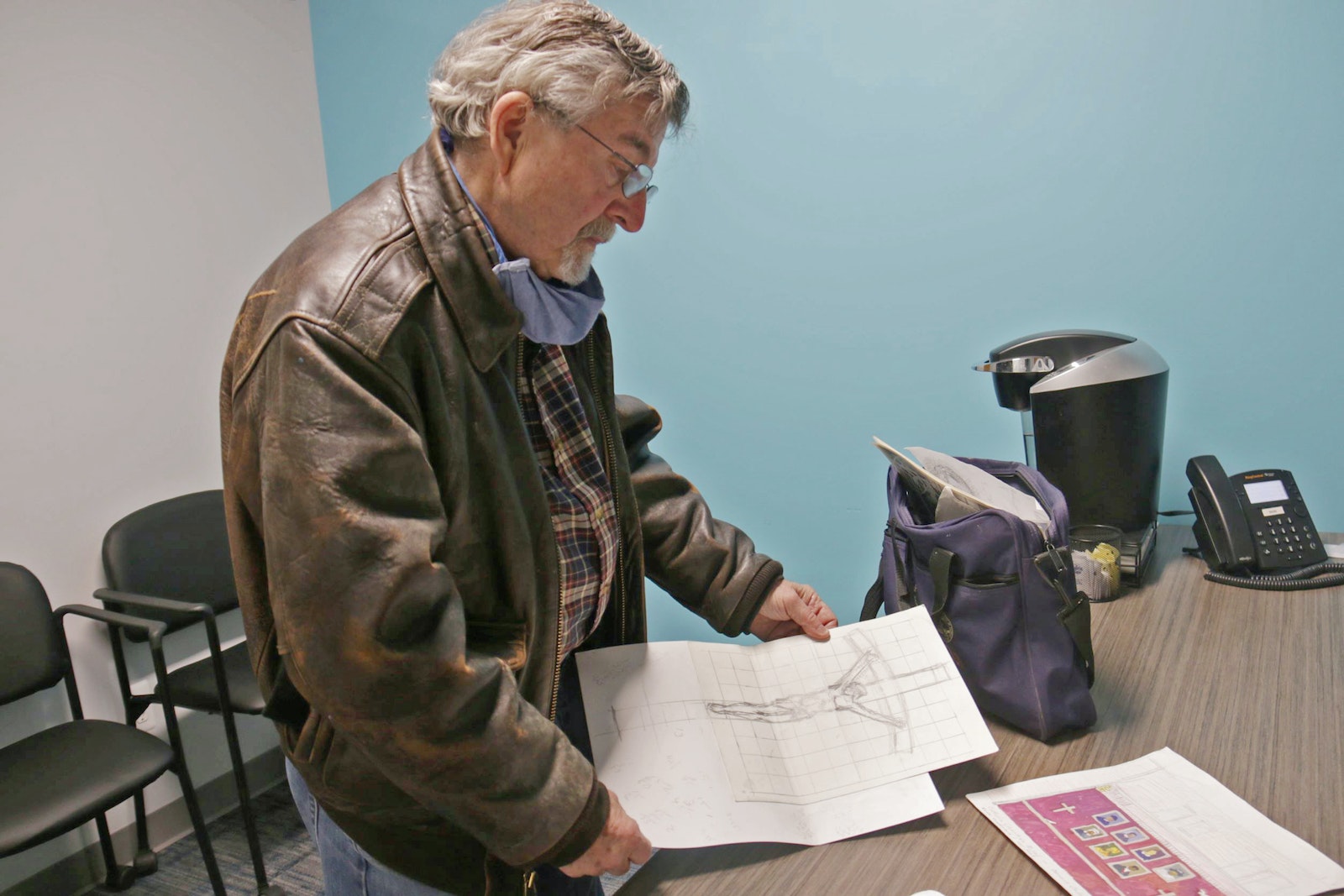 Orlowski examines a sketch of the crucifix painted alongside the mural's faces. Orlowski worked alongside another local artist, Kenneth Jackson, to complete the mural before the winter freeze set in.

Upon returning to the States, Orlowski attended Highland Park Community College and later Wayne State University, obtaining a degree in art education, which he used to teach in Detroit Public Schools. It was during this time when he got to know the city's African-American community.

“I was one of the few white students at Highland Park Community College, but it was there I learned about Black history, painting the kings of Nigeria, painting African folk heroes,” Orlowski said. “I used students as models, and they appreciated my work. I remember reading about African kings and immersing myself in the culture and how to depict it appropriately.”

Catholics would recognize Orlowski's work in the mural of Pope St. John Paul II and the Black Madonna of Czestochowa in Pope Park in Hamtramck, as well as the two Resurrection murals at Sweetest Heart of Mary Church in Detroit, a mural of Detroit’s east-side Polish churches at St. Hyacinth Parish in Detroit and the west-side Polish churches mural at St. Colette Parish in Livonia.

Orlowski is fine if his newest mural doesn't "knock people's hats off," like other works, because that's not its purpose, he says.

“The main thing is if the community appreciates it,” Orlowski said. “It’s public art, so the public has to appreciate it. When I drive down Woodward, I see all these different bright colors and outdoor stuff, and it’s pretty good. But this is appropriate for the building, for the purpose, for the meaning behind the mural. That’s what I like about this one: it has a meaning behind the mural.”