As a walk-on, he endured three years of grueling practices to play 63 seconds 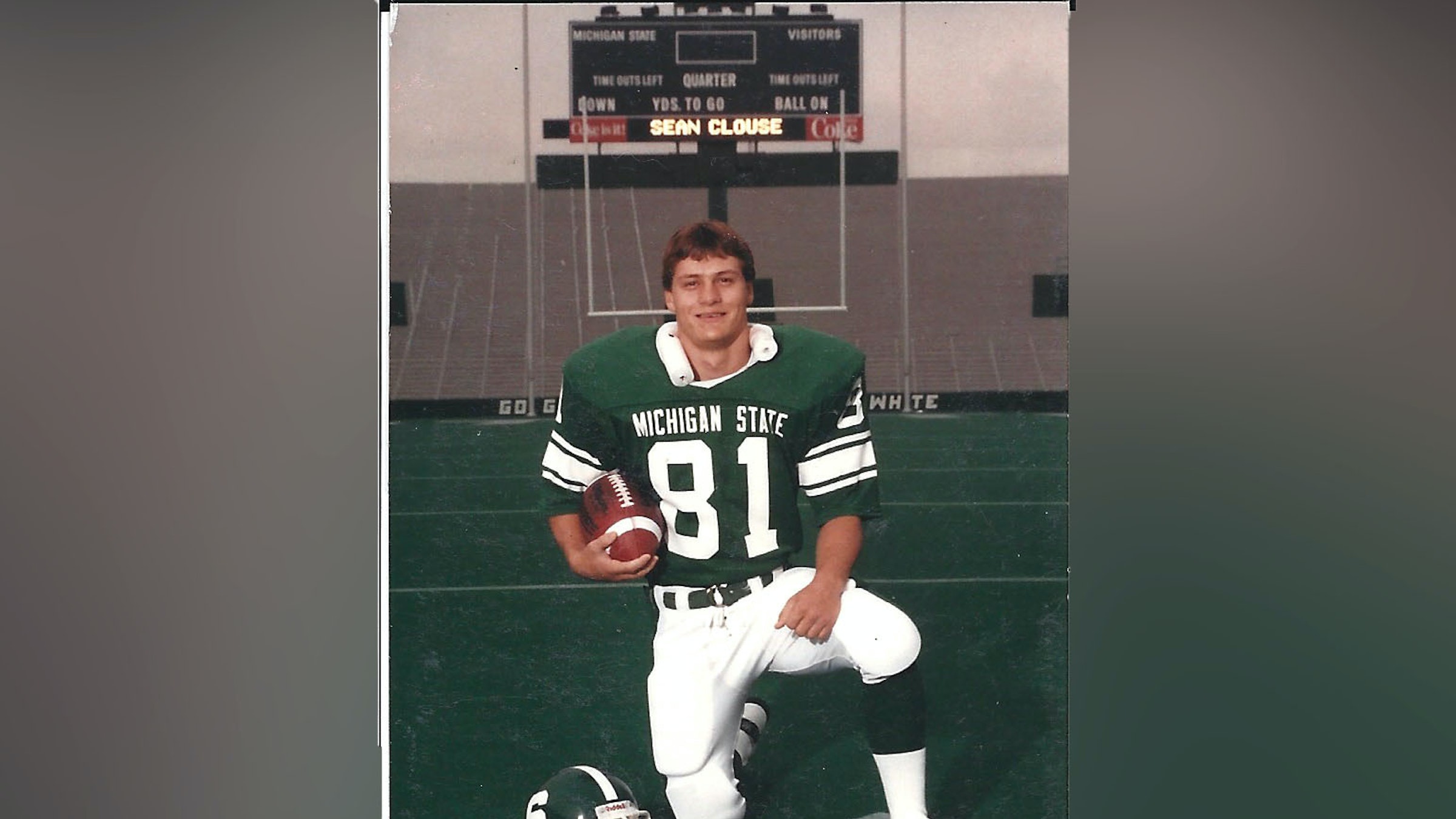 Sean Clouse walked on to the Michigan State University football team and endured three years of grueling practice “to see if I was good enough to play,” he said. He played, all of 63 seconds in a varsity game. Of his experience, he says: “I was never alone.” (Photo provided by Sean Clouse)

That’s the question you’ll be asking yourself time and time again in this account of a high school football player’s dream of playing on the collegiate level against the odds he very well knew would never happen.

“Walk-On, but Never Alone” — subtitled “The untold narrative of a lowly college football walk-on” — is Sean P. Clouse’s adventure, documented by nearly 300 journal entries of the highs (not that many) and lows (a whole lot) he experienced at Michigan State University between January 1985 and New Year’s Day 1988.

“I love the game, the competitiveness of it,” he explained during an interview recently at Orchard Lake St. Mary’s Prep, from which he graduated in 1984 and where he has taught and coached for 32 years. “I always felt I knew the game well. I had a drive to see if I was good enough to play. I wanted to see how good I was.”

He started playing football as a fifth grader at St. Joseph School in Lake Orion. At St. Mary’s, he played three games as a freshman on the JV squad before he was elevated to the varsity, where he remained for his high school career. “If you looked hard enough,” Clouse wrote, “you’d find my name on the honorable mention all-state team.”

Recruiters at about a half-dozen colleges he visited looked down at Clouse’s size — 5-foot-7, 177 pounds for a lineman! — and showed little interest. “I had to face reality; there is more to life than football.”

Clouse enrolled at Michigan State. “But there was something missing in my life that semester,” he said. “I wanted to be part of a football program. I had read an article about a kid who had walked on and played and I said, ‘Why not?’”

Before Christmas break, Clouse walked across campus to the Duffy Daugherty building. “I met with coach Larry Bielat, who was in charge of the walk-on program. I was nervous. I asked what I needed to do. He said to just show up after the holiday and he’d tell me. It was that simple.”

The instructions were matter of fact: come to conditioning workouts every morning and the weight room every afternoon and “we’ll see what happens.”

“That was the roughest part,” Clouse said. “You’re going there and going there and there’s no guarantee you’d ever see the field. It was always in the back of my mind they have no investment in you as a walk-on. They can get rid of you whenever they want.”

For three years, every aspect of Clouse’s life — academic, social, even spiritual — revolved around the five seasons of the college football calendar: winter conditioning for eight weeks from January to March; spring practice from April to early May concluding with the Green and White game; summer break in June and July; the double sessions of fall camp lasting for 30 days through August; and finally, the football season September through November.

He wrote about his first day on Jan. 14, 1985, in a journal his English teacher assigned for the term, but his mother encouraged him to keep as long as he was still a walk-on.

“I will never forget this day. I am so sore. I ran my butt off from 7:55 until 8:50. Went to two classes all sweaty ... after a quick lunch and another class it was off to the weight room for 2 hours of sheer torture. The half-hour walk back (to his dorm) in a snow storm didn’t help much either ... Why would anyone in his right mind put himself through this crap? ... Oh, well, I’m in it now. I won’t be backing out.”

The winter conditioning phase intensified week after week with bellyflops, sit-ups, push-ups, sprints, mile and half-mile time trials, and agility exercises along with, of course, the early morning run and afternoon weight lifting.

Feb. 26, 1985: “I’m tired of going to morning conditioning and getting all torn up like today ... I fell during a drill and scraped across the track. It tore the skin off my knee ... I got hollered at for screwing up the drill.”

April 3, 1985: “Today, I realized where I actually was — in Spartan Stadium at football practice! Not only was I wearing the green and white, but I was also wearing my number ... The tiny linebacker you see running around down on that soft Astro-turf field wearing #81 was me!”

Spring practice lasts about six weeks. Twenty days are allowed by the NCAA to be in full pads. Practices are used to implement new offensive or defensive systems and allow new players to learn the existing or new systems. Clouse was in the new-player-learning-a-new-position category, transferred from his familiar starting defensive line in high school to third string linebacker. He found himself standing on the sidelines and watching most of the practices.

However, he played nearly the entire fourth quarter in the 1985 Green and White Game. He and his family celebrated like they had won a world championship.

Clouse spent June and July at home. He found a variety of summer jobs. One lasted three weeks, 70 hours a week, at a horse farm/hunt club. The best one was being a field examiner with the Michigan Department of Commerce. He traveled around the state visiting used car dealerships checking that they followed the rules and regulations governing finance charges.

“It dawned on me that I wasn’t a welcome sight for some used car salesmen having someone going through their files,” Clouse wrote.

Fall training camp was far different from spring ball. There were no classes or students on campus for nearly 30 days. Nothing but football, football and more football. It was a grind beginning with wake-up at 6:45 a.m. to lights out at 11 p.m. For three weeks there were practice sessions in the morning and in the afternoon. On-field practice time was five hours but with prep time (taping, meetings, etc.) it seemed like a lot more.

During the football season, Clouse joined other third- and fourth-stringers as a scout team emulating primarily the defense of the upcoming opponent for the starters. Scrimmages were repetitious, brutal at times, particularly if the Spartans had lost (as if it were the scout team’s fault?) or if the game ahead was against either Notre Dame or Michigan.

Only 60 players of the 115 or so on the roster were allowed to travel to away games. Home at Spartan Stadium, scout team players were among the 95 selected to dress and partake of the hoopla and excitement of pre-game warm-ups, watching from the sidelines, rarely setting foot on the field.

That changed for Clouse on Sept. 28, 1986, his 21st birthday. The Spartans were clobbering Western Michigan 45-7. With one minute and three seconds remaining in the game, coaches sent in the scout team defense.

Excerpts from his next day’s journal: “My friends jumped up and down going crazy in the stands ... It is second down and 10. The next play is a play well beyond my dreams I could have come up with ... the Broncos QB runs out my way ... he throws the ball. It appears to be a pass to me. The intended receiver was behind me as I cut underneath him ... I couldn’t believe it! The ball spirals through my hands and directly into my chest. I dropped it!”

Despite “always feeling beat up,” Clouse said he never suffered any serious injury, but a host of nagging ailments — the flu, sprains, bloody nose, strep throat — that he played through.

On Aug. 23, 1987, he wrote: “I’ll start with the rash of players leaving the team lately. It brings back the question of why I’m still here. It’s hard for me to believe but I may be getting too old for this! My body is aching all over and my shoulder is feeling weak ... I believe something big is going to happen. I want to be a part of it.”

And big it was. The season opened with a 27-13 win over Southern California followed by back-to-back losses to Notre Dame 31-8 and Florida State 31-3. Fortunes changed dramatically against Big Ten opponents. MSU won three in a row, then a tie, and four more wins to claim the Big 10 championship, climaxed by a 20-17 victory in a rematch with Southern Cal, the Pacific 10 champ, in the Rose Bowl.

Clouse and four other walk-ons who persevered the arduous three years were invited to dress and travel with the team to Pasadena, Calif.

Almost as an afterthought, there was an academic side of the student-athlete equation that Clouse had to contend with, too. He did so successfully, graduating in December 1988 with a Bachelor of Science degree from the College of Natural Resources with an emphasis in fisheries and wildlife. 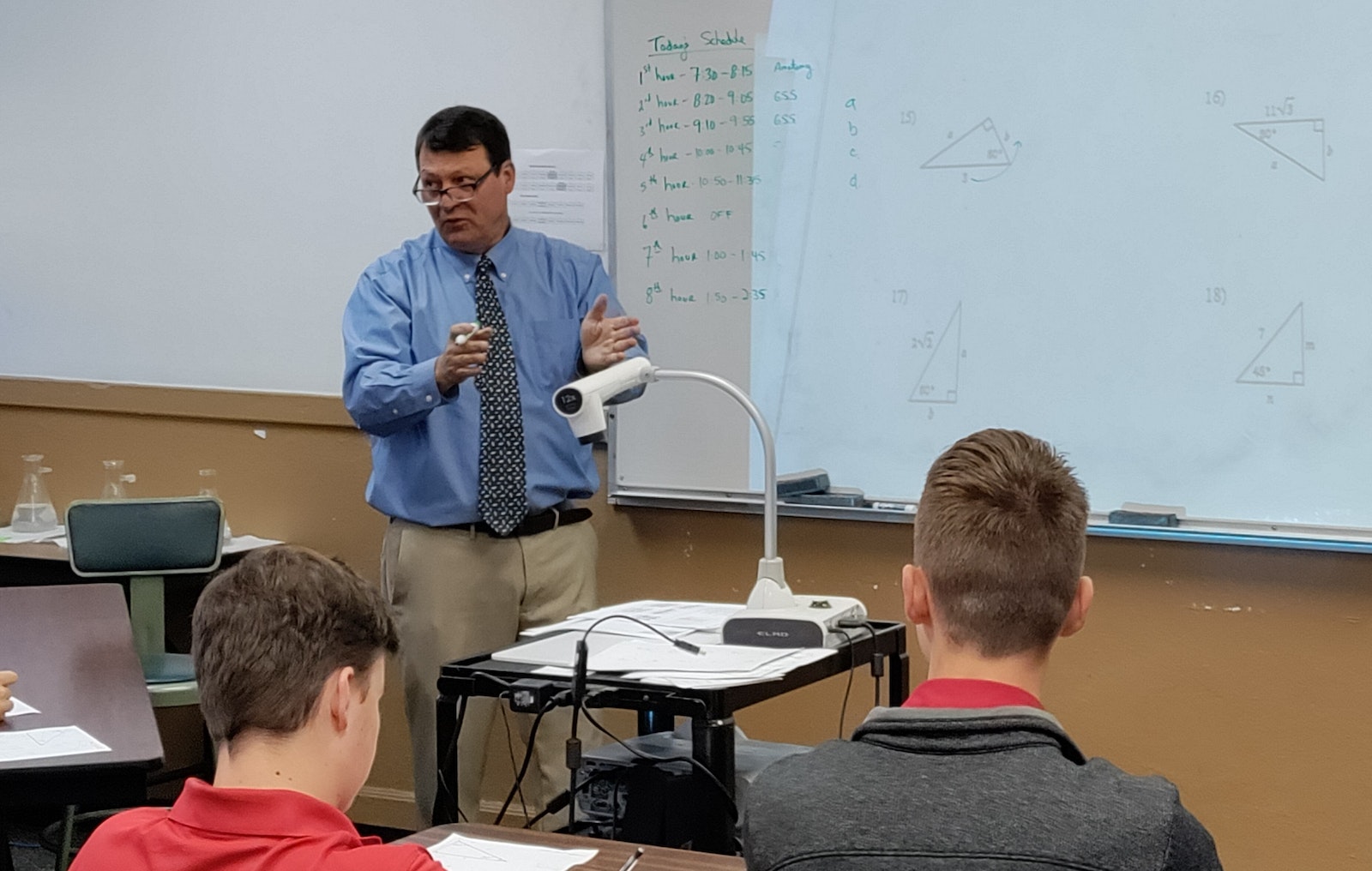 Sean Clouse has been teaching and coaching at St. Mary’s Prep for 32 years, “As much as I enjoy coaching,” he says, “I enjoy teaching even more. To me there is no difference. Coaching is teaching on the field and teaching is coaching in the classroom.” (Photo by Don Horkey | Special to Detroit Catholic)

The degree left him with few job opportunities. He worked with his brother, Willie, as a millworker. He decided he wanted to coach as well. He was hired as the JV head coach at St. Mary’s, and months later he was promoted to varsity defensive line coach and helped St. Mary’s to six state titles. He coached the Eaglets track team to state championships in 2015 and 2016. This fall, he is the assistant JV coach at Lake Orion High School.

He joined St. Mary’s full-time faculty in 1991 after earning a teaching certificate and master’s degree from Wayne State University, “As much as I enjoy coaching,” Clouse said, “I enjoy teaching even more (physics, anatomy, math). To me there is no difference. Coaching is teaching on the field and teaching is coaching in the classroom.”

Clouse met Megan McCormick (a 1984 graduate of Farmington Hills Mercy) at MSU. They married in December 1994. Their union has produced three sons and a daughter. Megan is a nurse practitioner.

Clouse frequently in his journal expresses gratitude to God. This excerpt dated Feb. 20, 1985, came early in his time at MSU. It’s a theme that he referenced often:

“I pray each night for the strength to carry on. Days when I am worn out and exhausted ... There are more important things in life than football. I know that but I believe He works in mysterious ways ... I trust that God has a plan for each one of us. I feel He is molding me into something special. I hope I am able to answer His call.”

Why? Clouse answers in his closing paragraph: “I now ‘walk on’ (without a hyphen) just as I walked on in 1985, ‘but never alone.’”

Those who like stories of the individual in the face of overwhelming odds achieving the impossible dream will find themselves fascinated by Clouse’s dedication and persistence, even as they cringe at the hours of grueling practices he endured with little or no acknowledgement.

Football fans, particularly Michigan State alumni, will get a chance to relive the Spartans’ 1987 Big 10 and Rose Bowl conquests week-by-week, game-by-game by way of the behind-the-scenes look at the preparation and planning that Clouse describes in his journal.

Athletes who may be pondering the walk-on route may find reading Clouse’s experience helpful in making their decisions. However, Clouse offers this advice: “You had better want to do it. You must be willing to give it your all, everything you have.”