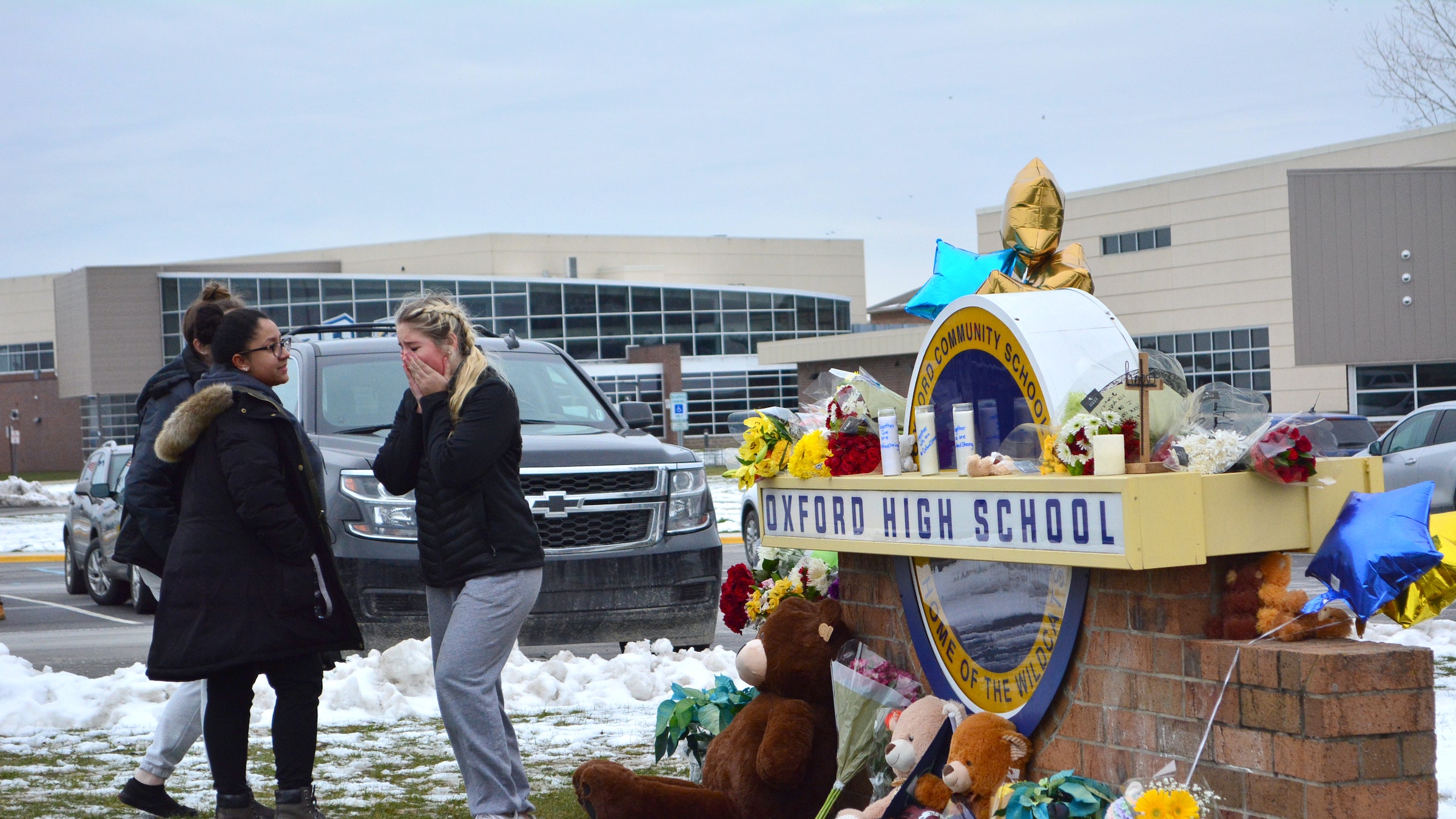 An Oxford High School student breaks down after placing flowers at the foot of the school's large sign Dec. 1 in a makeshift memorial to those killed in a Nov. 30 shooting at the school. Four students died and seven others, including a teacher, were injured in the worst school shooting in Michigan's history. (Photos by Michael Stechschulte | Detroit Catholic)

OXFORD — A day after a tragic shooting claimed the lives of four Oxford High School students and forever changed the lives of countless others, community members were picking up the pieces.

On a chilly afternoon Dec. 1, the scene at Oxford High remained somber, with patrol cars and news vans dotting the streets and parking lots throughout the usually quiet town.

A few paces from the south entrance to the school, adjacent to the inverted-bowl football stadium, students arrived in small groups, many with tears on their faces, to place teddy bears, flowers, crosses and candles at the foot of the school’s main sign. 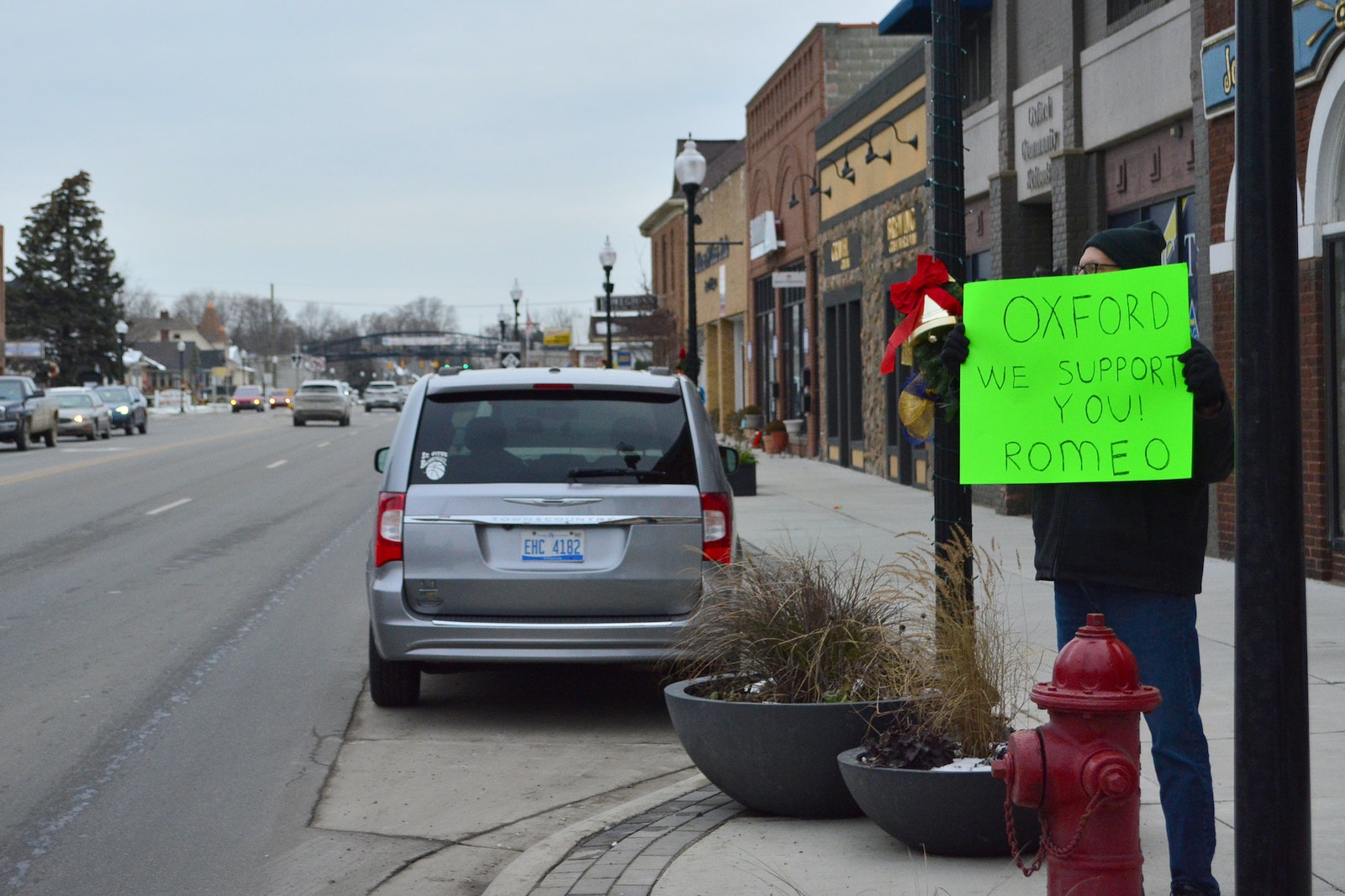 A Romeo man holds a sign for passing motorists in downtown Oxford on Dec. 1 as community members grappled with the loss of four high school students and uncertainty surrounding seven others who suffered injuries in the attack.

Inside the school, authorities continued to comb through mountains of crime scene evidence, just the beginning of an investigation Oakland County Sheriff Mike Bouchard said could last weeks, if not months, as deputies and federal agents interview hundreds of witnesses and search for clues about the alleged shooter’s motive.

Authorities identified 15-year-old Ethan Crumbley, a sophomore at the school, as the suspect. Crumbley was arraigned Dec. 1 and will be tried as an adult on 24 criminal charges, including terrorism and four counts of first-degree murder.

Throughout the day, mourners came to pay tribute to those killed, who included Hana St. Juliana, 14, a freshman volleyball player; Madisyn Baldwin, 17, a senior and aspiring artist; Tate Myre, 16, a junior running back on the varsity football team; and Justin Shilling, 17, co-captain of the school’s bowling team.

Three of the students died Nov. 30, while Shilling succumbed to his injuries Dec. 1, authorities said. Seven others were wounded in the attack, with many remaining hospitalized. 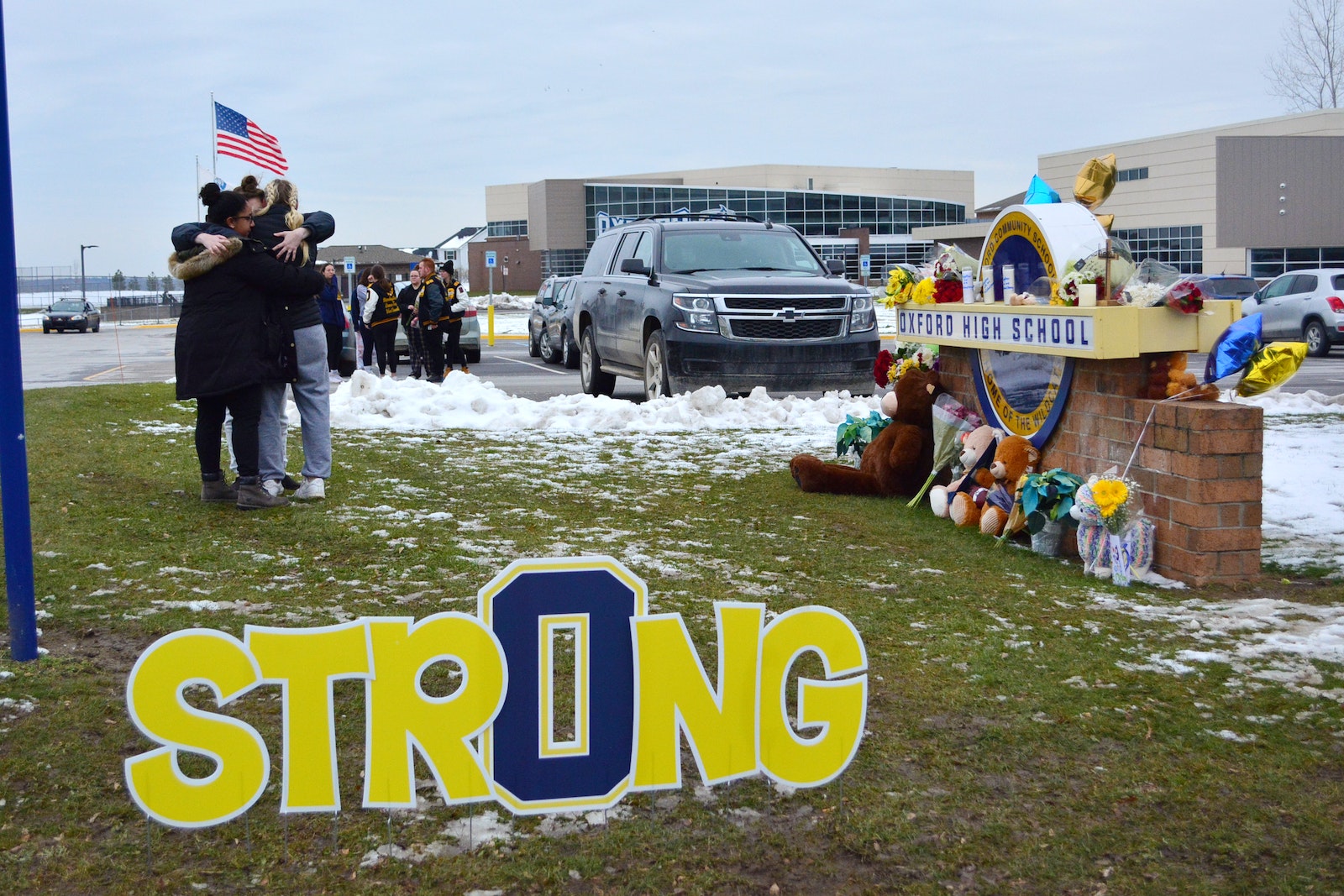 Students embrace one another outside Oxford High School on Dec. 1 as authorities continued the investigation. Across Oxford and neighboring Lake Orion, community members posted signs of support and continued their prayers for the victims.

An online petition had gathered more than 77,000 signatures as of Wednesday evening to rename the Wildcats' football stadium after Myre, whom witnesses said was trying to disarm the gunman when he was shot.

As shockwaves continued to reverberate in the community, those at nearby St. Joseph Catholic School in Lake Orion were among the mourners. Many of the K-8 school’s students have siblings or family members at Oxford High, where many St. Joseph alumni attend, said principal Joseph Zmikly.

“As an Oxford alum myself, as well as someone who worked at the school for three years, it’s about as close to home as it can be,” Zmikly told Detroit Catholic on Wednesday. “It’s everyone’s worst nightmare who works in a school.”

Zmikly said he knows the Oxford teacher who was among the wounded, a 47-year-old woman, and was texting with her while she was in the hospital.

“She's back home now, thank God,” Zmikly said. “I was chatting with her a little bit. I let her know I was praying for her, and she said, ‘I thought about you when I was in the hospital. Pray hard for the Oxford family.’ I asked how she was doing, and she said she’s OK physically — the bullet went through her arm — but emotionally not so good.” 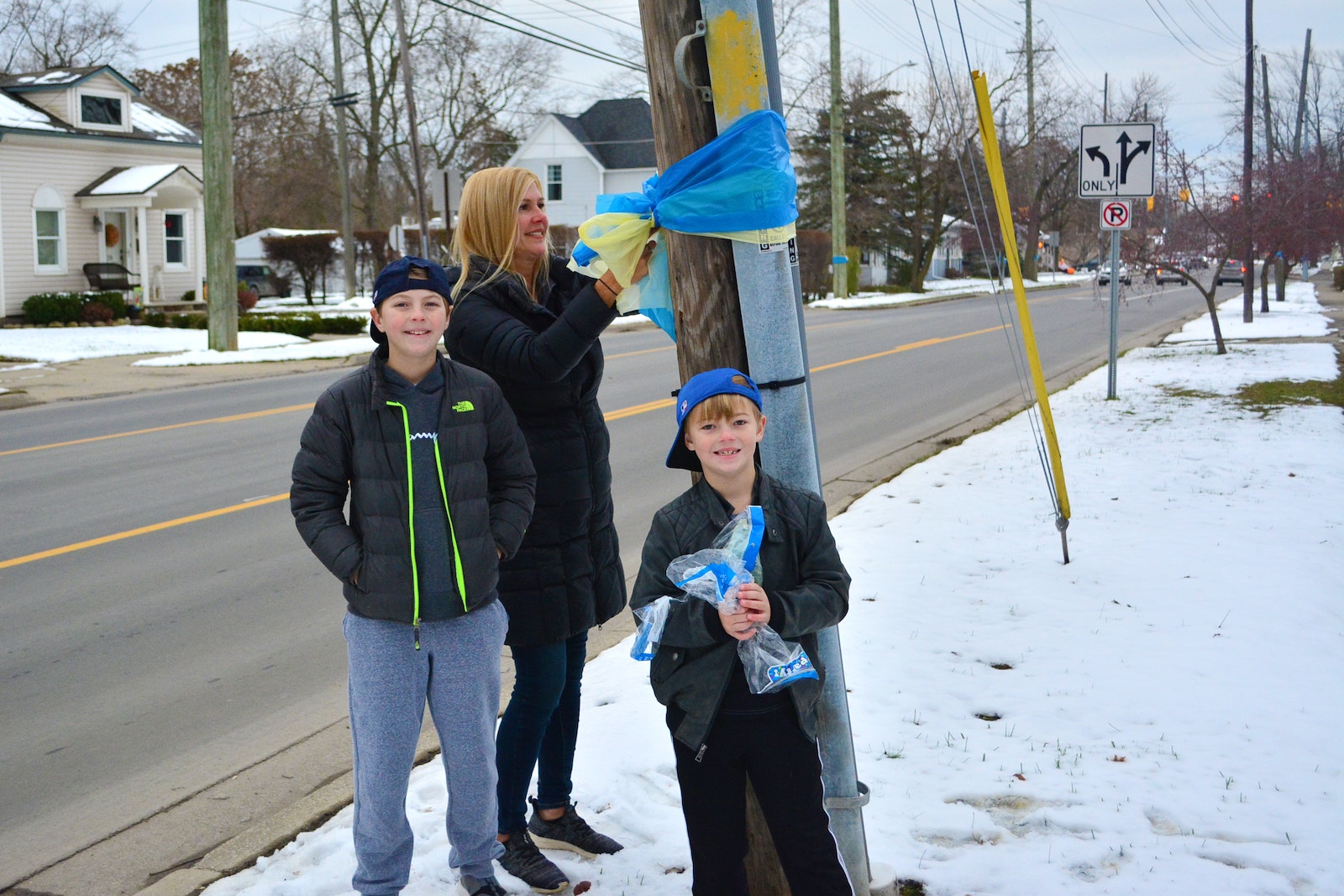 A woman and two boys, who chose not to be identified, tie blue and gold ribbons to telephone poles along Glaspie Street near Oxford High School on Dec. 1. Dozens of volunteers hung banners, ribbons and signs throughout the town.

Zmikly said he “can’t imagine” the grief victims’ parents are experiencing, adding the entire St. Joseph community — as well as all of Oxford and Lake Orion — is rallying for the families.

“One of the kids who died, I knew him,” Zmikly said. “There's another girl who is in critical condition, and I taught her older brother when I was a teacher. There’s a lot of connections.”

St. Joseph School was closed Dec. 1 out of respect for the families, Zmikly said, and so staff and students could mourn.

The school also brought in counselors from Catholic Charities of Southeast Michigan to speak to teachers and staff, who will need tools to help students cope when school resumes Thursday, he said.

“We know there's going to be a wide range (of emotions),” Zmikly said. “Some kids are going to be very personally impacted by this, while for other kids, this might as well have happened (somewhere else). We’re trying to help our teachers learn how to navigate this together.” 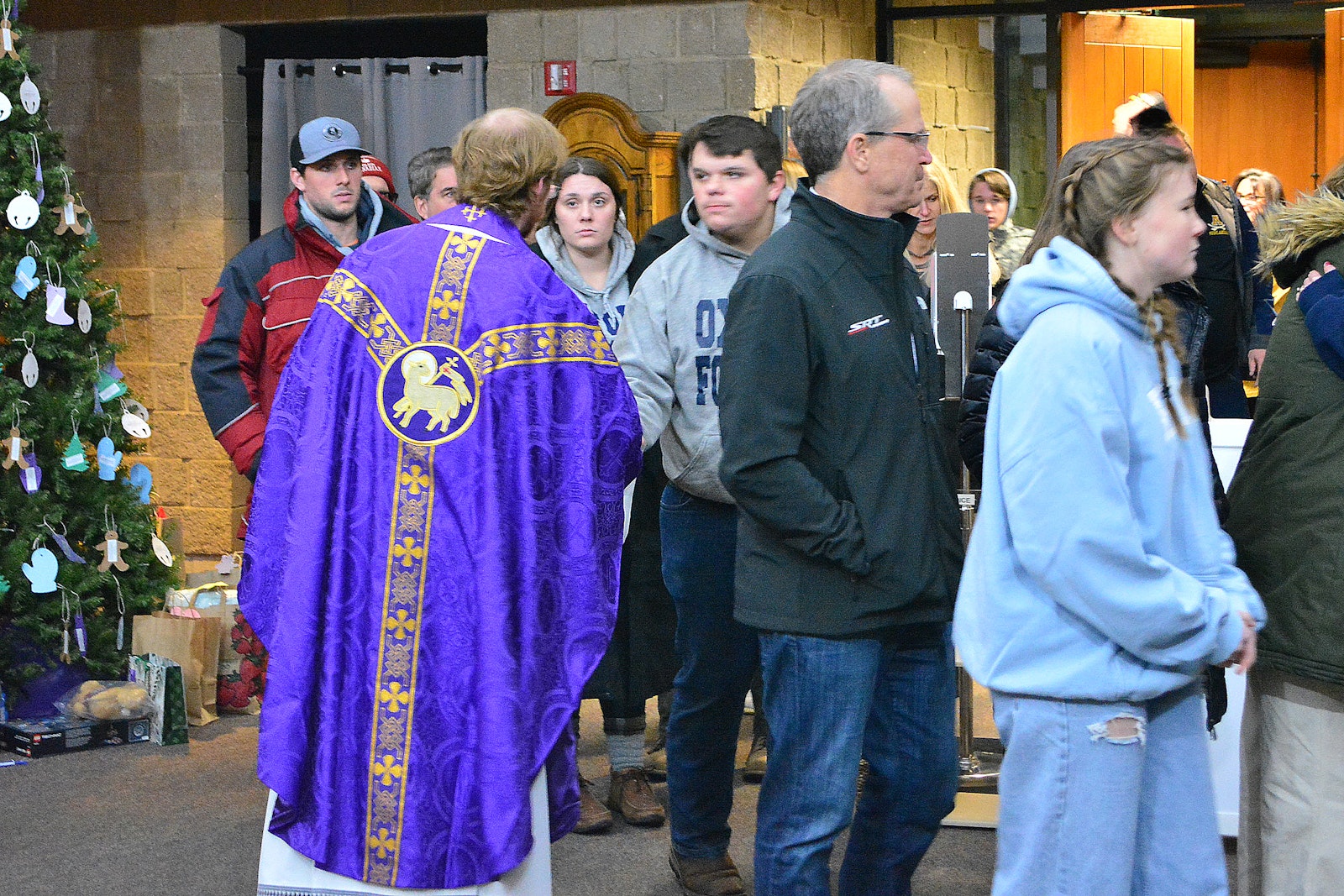 Andrea Foley, chief operating officer and director of behavioral health for Catholic Charities of Southeast Michigan, said grief counselors offered staff tips for speaking to different age groups about the crisis, offering proactive opportunities to discuss feelings, providing an open forum for students to express their own fears, as well as ways to “do something positive” to support victims.

“One suggestion we gave was to have the students write cards or draw pictures to send to the high school,” Foley told Detroit Catholic. “They might have their own ideas to support kids in the (Oxford) community.”

“A lot of our families who use (La Casa Amiga’s) services have kids who go to Oxford High School,” Foley said, referring to Oxford’s robust school-of-choice program. “We have Spanish-speaking staff who can offer the same kind of support.” 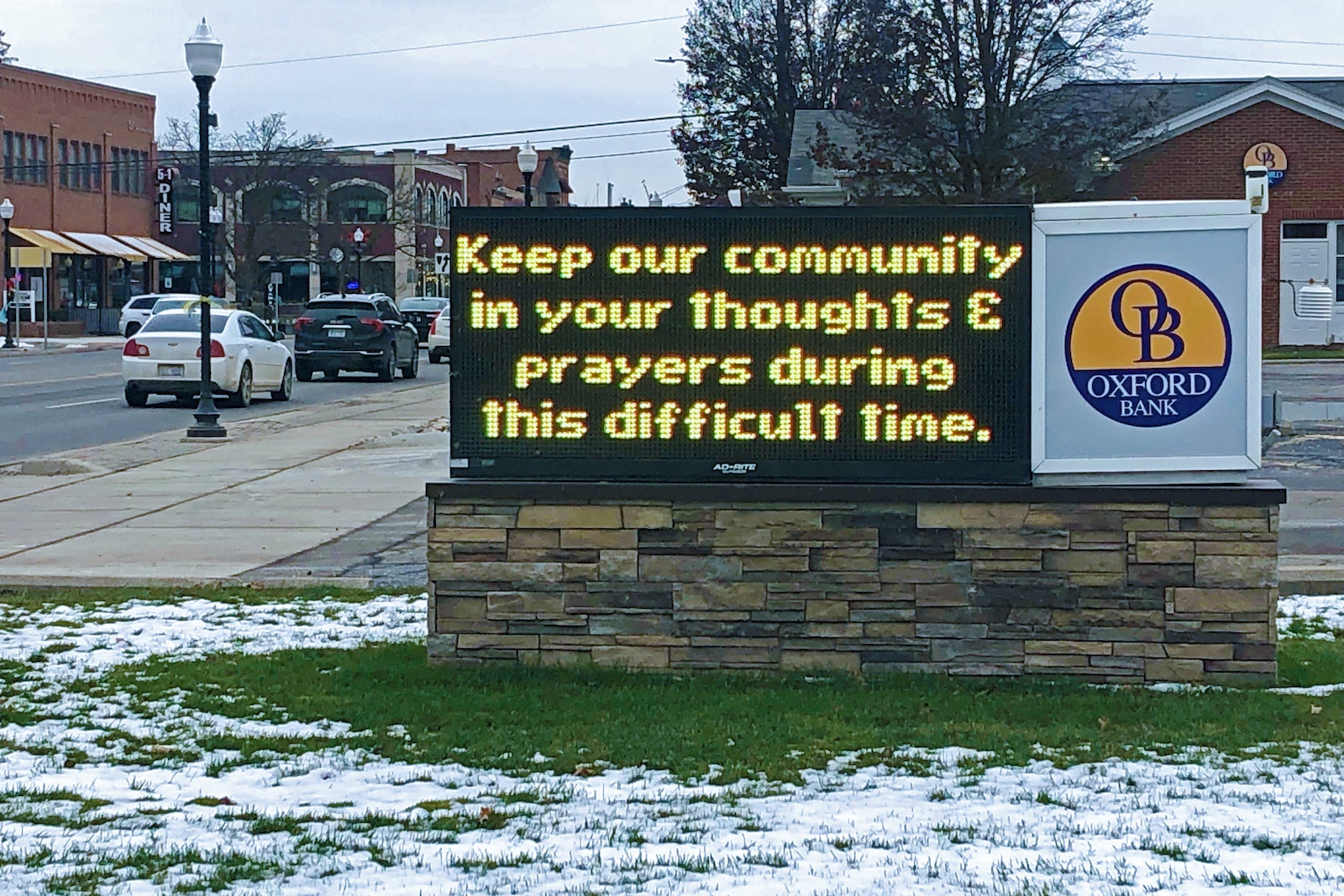 A sign displayed outside Oxford Bank in downtown Oxford asks for prayers for victims and their families Dec. 1.

Foley said it’s important for teachers and school administrators to reassure students that their own learning environment is safe, emphasizing the need to speak up if a student or staff member witnesses or hears something out of the ordinary.

"They might have concerns about things like that happening in their own school," Foley said. Staff members should remind students of the safety protocols in place at their own schools, and "let students brainstorm what they would do in a similar situation."

"Remind them that their school is safe," Foley said. "And encourage kids that if they see something unusual, they should always tell a teacher."

A tragedy such as the Oxford shooting affects everyone in the community, Foley said — counselors included.

“I have family in Oxford, and I know it’s a small community,” Foley said. “My brother lives in the neighborhood across the street from the Meijer where the kids were evacuated. My nephew is in middle school, and was texting me saying, ‘I’m OK, I’m OK.’ But he probably wasn’t OK.” 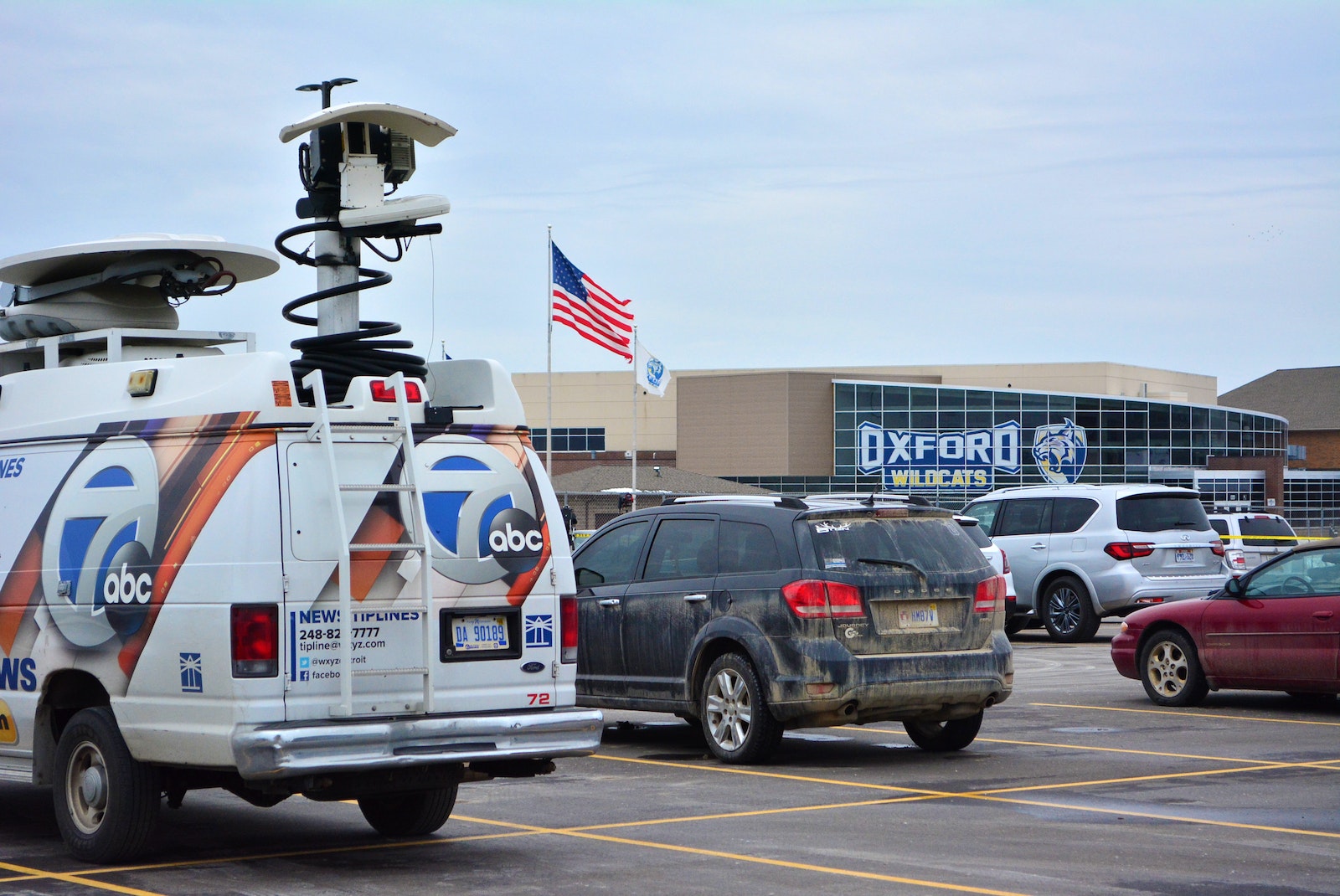 A Channel 7 news van is pictured in the parking lot of Oxford High School on Dec. 1. As students and community members cope with the tragedy, Catholic leaders say they hope to offer resources to grieving students and families.

Foley said watching her nephew process his emotions made her realize the gravity of the situation, and that healing will take a lot of time and resources.

“I asked him if he had friends who went to the high school, and he said yes, but none of them were shot,” Foley said. “And it hit me that this child now has this as part of his lived experience. It’s just a parent’s worst nightmare.”

Zmikly said the Catholic faith community can bless the wider public through its witness to Jesus' embrace of those who suffer, and that death doesn't have the last word.

“Fr. Jim (Kean, pastor of St. Joseph) during the session made the great point that as terrible as this is, we unite our suffering to the cross and to Jesus’ suffering,” Zmikly said. “He's right there with us and our suffering.”

“You hope that's one of the positives that can come out of a tragedy like this, that maybe people become closer to God in these moments,” he added. “You hope that happens.”