As pandemic shuts Catholics in, volunteers bring Eucharist to those who want it 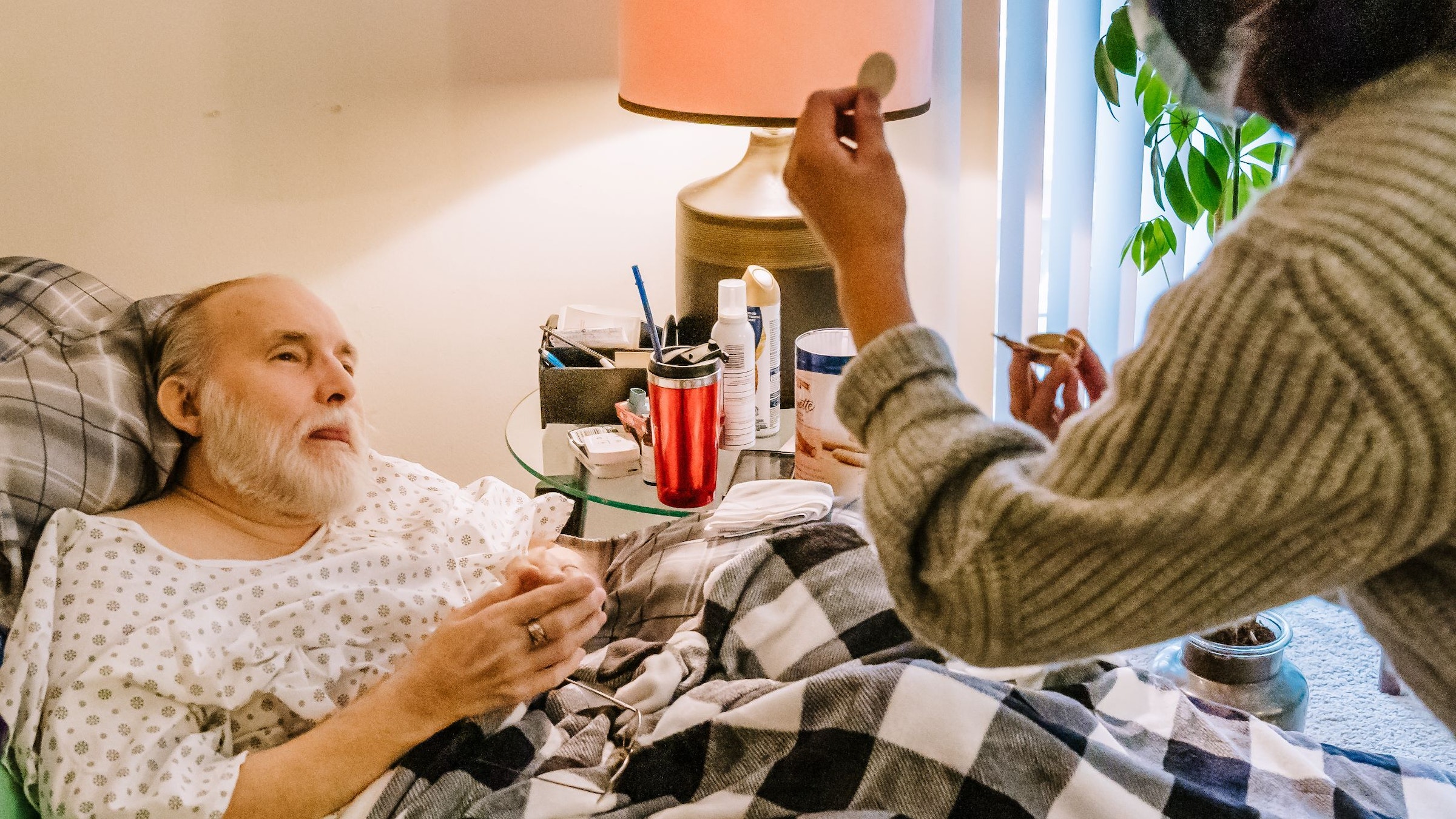 May Faraon, a volunteer from the Church of the Holy Family in Novi, brings Communion to Keith Gouba, a retired French pastry chef who suffers from multiple sclerosis, on Jan. 14. Faraon and other volunteers ensure homebound parishioners can continue to receive the sacrament. (Photos by Valaurian Waller | Detroit Catholic)

Elderly unable to drive, those with health conditions thankful for 'army of Eucharistic ministers' who make receiving Jesus possible

NOVI — The Catechism of the Catholic Church teaches that the Eucharist is “the source and summit of the Catholic life (CCC, 1324).” But for those who are homebound, getting to Mass to receive holy Communion can be impossible.

Some who are elderly or disabled find themselves unable to drive and have no one to take them to Mass. Others aren’t physically able to leave their homes, even if someone drives them to church. And some with serious health conditions continue to feel vulnerable because of the COVID-19 pandemic.

But for parishioners at the Church of the Holy Family in Novi and many other parishes, the Eucharist is just a phone call away, thanks to an “army of Eucharistic ministers” who serve the homebound.

Ten people at Holy Family regularly volunteer to be on call for anyone who needs holy Communion. Volunteers bring the Eucharist to private homes, care facilities or group homes upon request. Since announcing the opportunity in the parish bulletin this fall, a growing list of parishioners has formed of those wanting to receive the Eucharist. 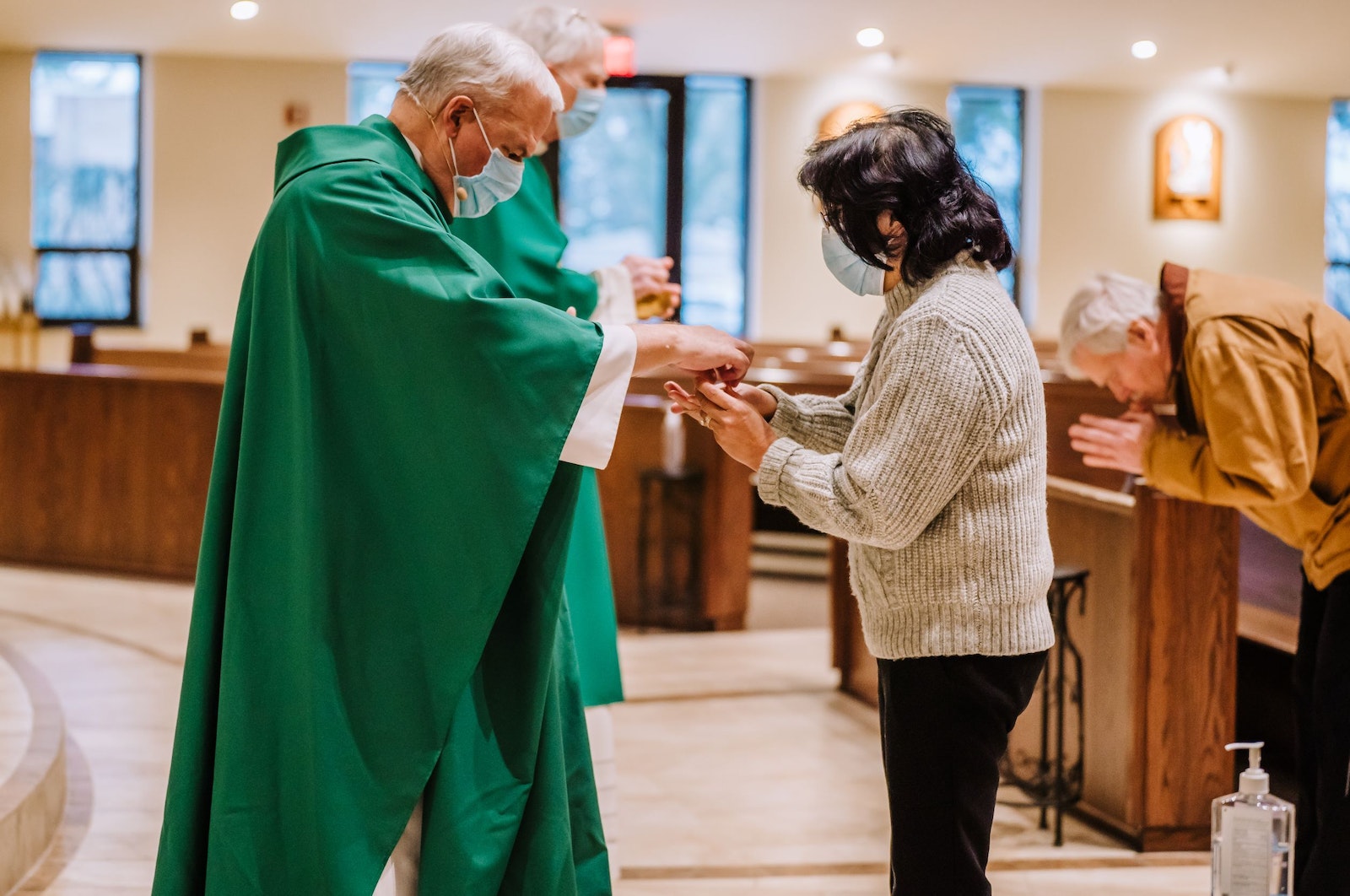 Volunteer May Faraon receives the Eucharist at the Church of the Holy Family in Novi on Jan. 14. Faraon brings Communion to the homebound of the parish every Friday, a ministry she volunteered for after seeing how much it meant to her own mother to receive the Eucharist after she became homebound.

“Before the formal ministry, I would ask a Eucharistic minister to take the Eucharist to someone, but now I can just reach out to the group and see who’s available,” said Ruth Cassar, liturgical ministry coordinator at Holy Family. “Sometimes people will bring a pyx and ask to take the Eucharist to their mother, but not everyone who’s at home has a person who can do that for them."

The Eucharist must be handled properly under the guidance of one’s diocese. A special vessel, called a pyx, must be used to carry the consecrated host, and the Eucharist must be consumed the same day it is taken from the Church during Communion or from the tabernacle. Ministers must go directly to the home or care facility of the person who will receive the Eucharist to maintain the reverence of the presence of Christ. A pyx must be properly purified after it is used.

Ministers to the homebound are equipped with a brief, written prayer service, which is used when distributing Communion at senior centers and group homes. Those who bring the Eucharist to people in homes may use the prayer service or pray other prayers with the communicant. 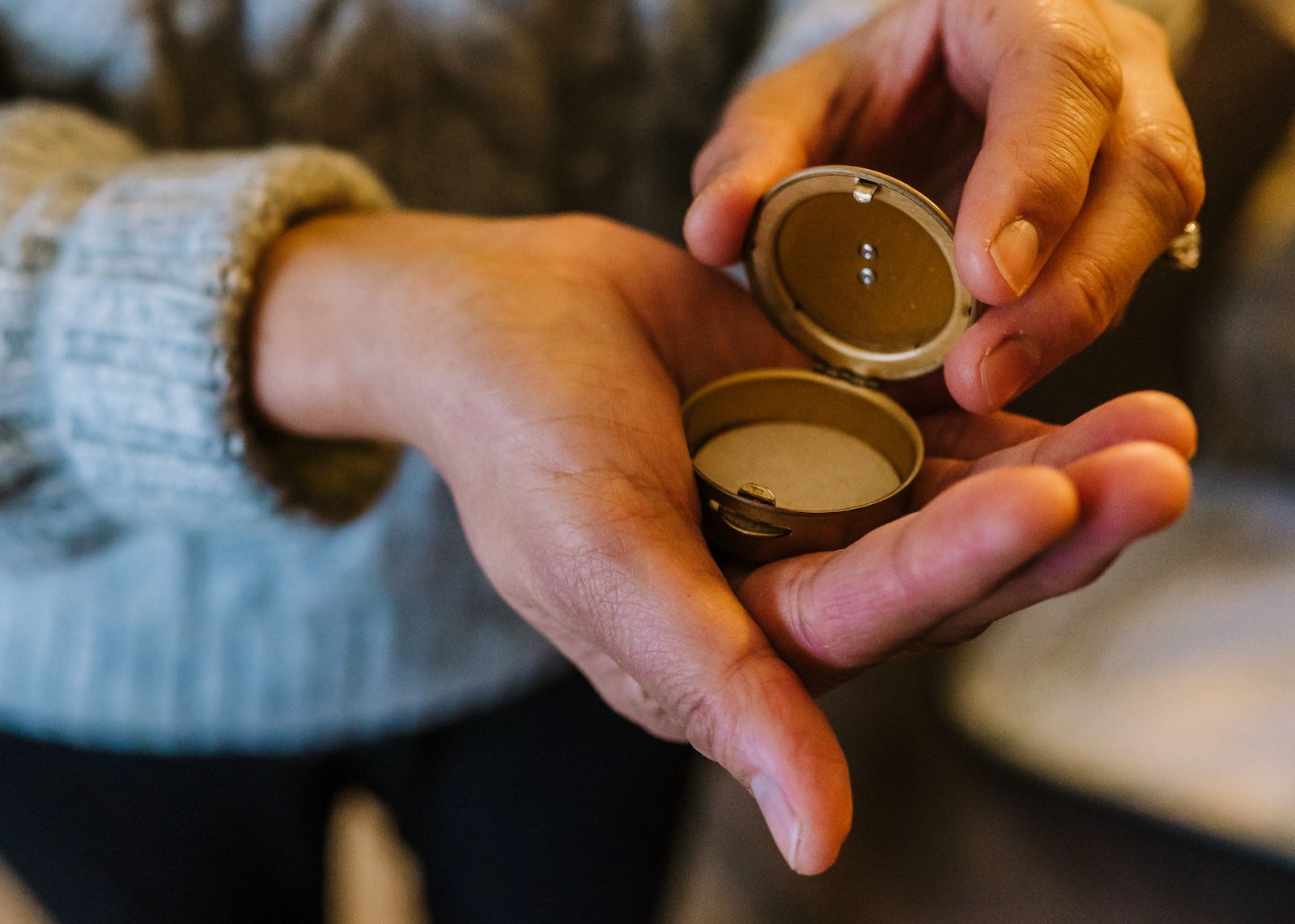 Ministers must keep the Eucharist in a special vessel, called a pyx, and go directly to the person who will receive it after leaving the parish with the host. Volunteers lead a brief, special prayer service with those who will receive.

May Faraon signed up to be a minister to the homebound at Holy Family. Faraon's mother, who lived with her, was 92 years old when she died last year. Her mother’s poor health kept her from going to Mass in her final years, and Faraon knew how much it meant to her mother to receive the Eucharist at home.

“I would go to church and receive the Eucharist, and I felt like she was left out,” Faraon said. “So I got a pyx and brought the Eucharist to her. She was happy I was able to do that, and now I can do it for other people.”

Every Friday, Faraon goes to Holy Family during her lunch break with her pyx and then brings holy Communion to a couple who lives nearby. Since beginning her weekly trips in September, Faraon has developed a friendship with the couple.

“They’re always very thankful. I tell them that I’m grateful to them for what they give me by allowing me to do this for them,” Faraon said. “After we pray and they receive (the Eucharist), we talk and get to know each other. I truly care for them. I’m giving them spiritual food, but there’s so much in return that they’re giving to me.” 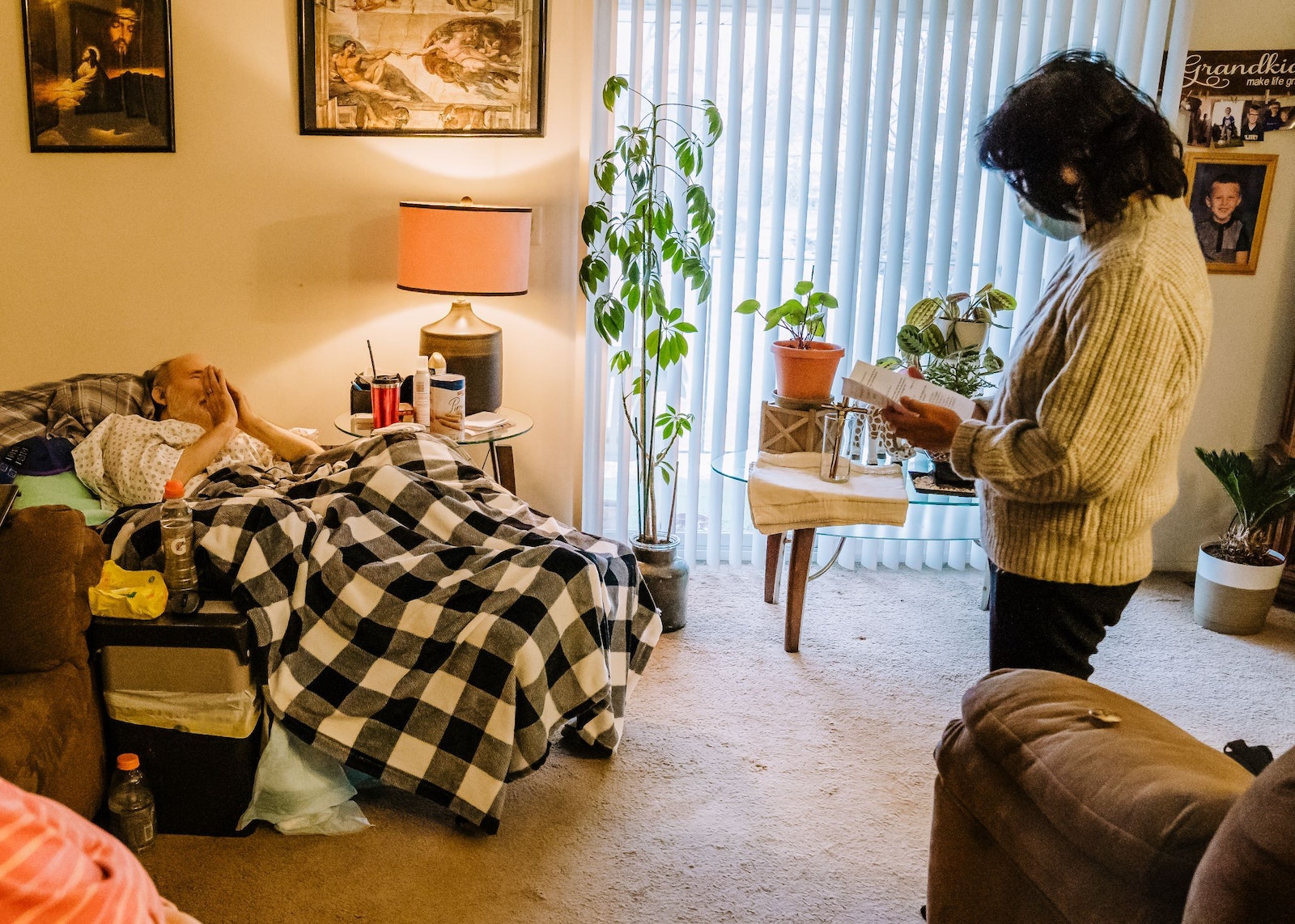 May Faraon prays with Keith Gouba in Gouba's home on Jan. 14 before offering him Communion.

Tom and Kay Welch, both 84 years old, received holy Communion in their home weekly from Cassar during the height of the pandemic. They have since returned to Mass, but plan to reach out to Cassar and the ministry for the homebound again when snowy weather prevents them from driving to Mass.

“It’s comforting to receive it,” Kay Welch said. “When I was a nurse, I would see the priests come to bring Communion or give last rites, and you could see the effect it had on the other patients and the staff, to see that example and strength of the faith.”

David Campbell became a minister to the homebound this fall. As a new retiree, he was looking for ways to volunteer, and now visits several care facilities weekly, leading a prayer service with another volunteer before they distribute holy Communion.

“You can watch Mass on TV, but you don’t get that connection to the Eucharist. That’s the center of our Catholic faith,” Campbell said. “Obviously, we’re not priests, but it’s important to go through those prayers to honor the sacrament.” 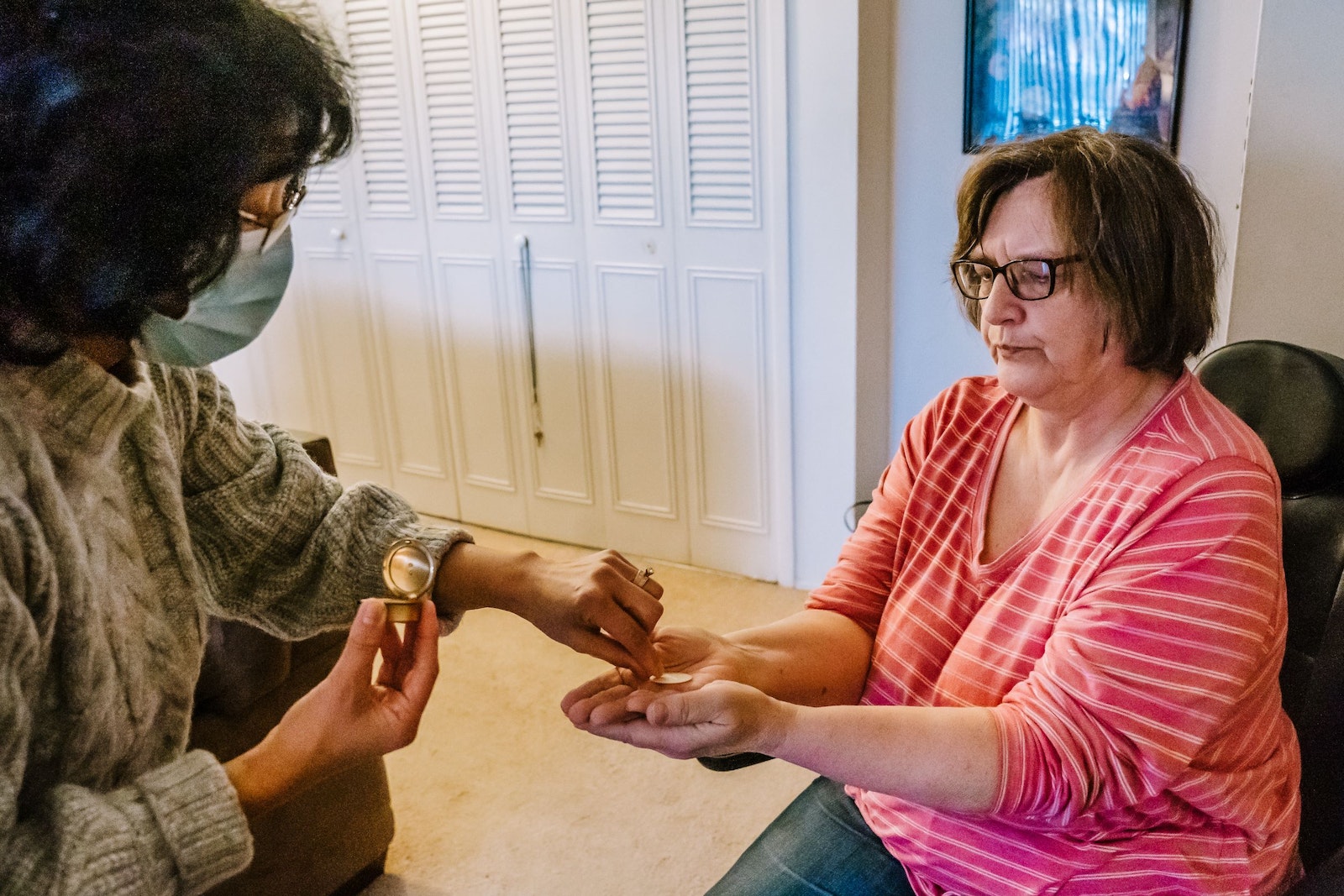 Marlene Gouba receives the Eucharist from May Faraon, a volunteer from the Church of the Holy Family, on Jan. 14.

Like Faraon, Campbell feels he is getting more out of volunteering than he’s giving. He and Edward Essayan, another volunteer, spend time visiting with residents at Waltonwood Twelve Oaks Senior Living in Novi every Thursday when they bring Communion to residents.

“Thursday is the best day of my week,” Campbell said.

Many parishes in the Archdiocese of Detroit offer similar ministries, and parishes will make arrangements to bring the Eucharist to those who ask. If you are a homebound Catholic who would like to receive the Eucharist, contact your parish office.

“We’re happy to get Jesus to people who want to receive Him, and many want that desperately,” Cassar said.