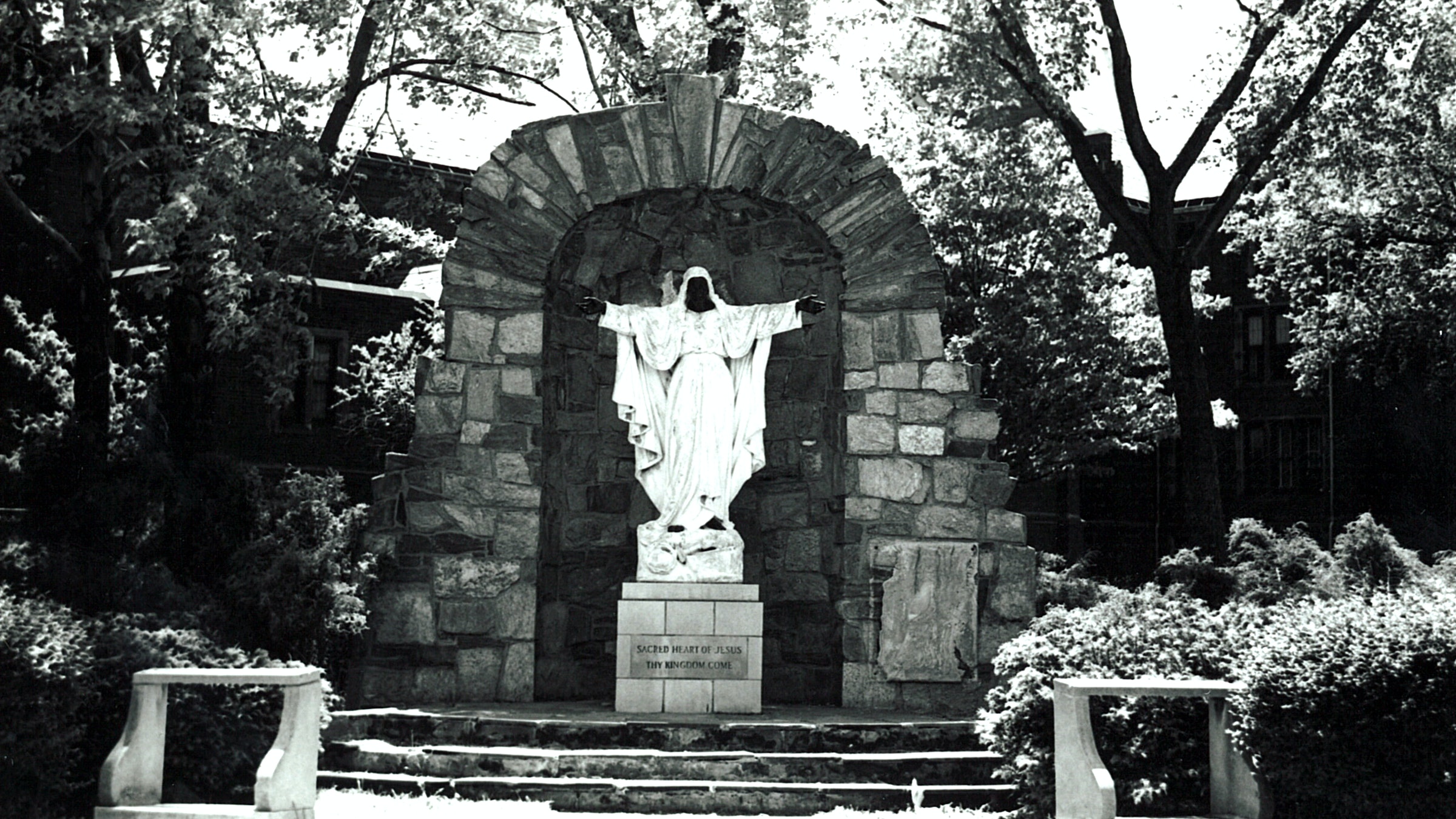 The face, hands and feet of the Sacred Heart of Jesus statue on the seminary's campus were painted black during the 1967 civil disturbance. (Photo courtesy of Sacred Heart Major Seminary)

Seminary endured strife of 1943, 1967 Detroit civil disturbances as iconic statue became a symbol of Christ's presence for all

Editor's note: This article is the fifth in a monthly series looking back on the history and faith of Detroit's Sacred Heart Major Seminary, which is celebrating its centennial year in 2019-20.

Part 1: After three previous attempts, Sacred Heart Seminary was founded at last in 1919

Part 3: Surviving tough times: How Sacred Heart Seminary endured, with an eye to the future

DETROIT — The logo of Sacred Heart Major Seminary might be a lion, but the statue of the Sacred Heart of Jesus with black-painted face, hands and feet at the intersection of Linwood Avenue and Chicago Boulevard symbolizes the heart of the seminary — as well as the struggles of the city of Detroit.

And although the seminary has long lived its role as a caring neighbor to all, Detroit’s evolution echoed a challenge faced by the entire nation.

Civil unrest shakes Detroit to its core in 1943

In 1920, a year after the seminary’s founding, the city’s population stood at nearly 994,000, according to U.S. Census figures, with white residents making up nearly 96 percent of that total, and African-Americans making up nearly 4 percent.

But by 1940, the population of the Motor City had exploded by more than 60 percent to 1.6 million, with white residents still composing a hefty 91 percent. Yet the city’s black population had more than tripled in that time, as African-Americans moved away from the Jim Crow laws of the South and headed northeast for good-paying jobs in the auto industry and an improved chance for equality.

Although jobs in the city were plentiful — especially after auto factories were converted to manufacturing munitions for World War II — housing was not. By June 1943, most of the city’s African-American residents were living in small, subdivided apartments crowded into 60 square blocks on the east side. With such stress at home, African-American residents often fared no better at their jobs, as they faced hostile racism from their white, ethnic co-workers.

The pressure mounted when, in that same month, 25,000 Packard plant workers stopped production to protest the promotion of three black colleagues to the assembly line, according to the Detroit News. Days later, on June 20, fights broke out among African-American and white youth on Belle Isle. Police subdued the fighting, but hours later, competing rumors of white residents attacking African-Americans and vice versa resulted in two mobs converging at the city’s main thoroughfare, Woodward Avenue.

Fighting ensued during the next three days. Cars were overturned and set on fire, and President Franklin D. Roosevelt sent in 6,000 Army troops in tanks armed with automatic weapons, who quickly quelled the chaos.

But 36 hours of violence had taken its toll: 34 people had died — 25 black residents and nine whites, with 17 of the African-Americans and none of the whites killed by police. Thirteen deaths remain unsolved. At least 600 were injured and 1,800 arrested, of which 85 percent were African-American, according to a May 1969 article in Michigan History magazine.

Thurgood Marshall, then head of the NAACP Legal Defense and Educational Fund and who would later be appointed to the U.S. Supreme Court, criticized the city for its handling of the unrest, saying, “This weak-kneed policy of the police commissioner coupled with the anti-Negro attitude of many members of the force helped to make a riot inevitable.”

Detroit reached its peak population of 1.8 million in 1950 before beginning a steady decline, as industry and white residents settled in the suburbs. Meanwhile, the African-American population increased, reaching nearly 30 percent in 1960 and almost 44 percent in 1970, according to Census figures.

Sacred Heart Seminary had always reached out to its neighbors, as seminarians refined their pastoral skills. But the seminary quickly established itself as a leader on race relations in the city, with seminarians providing a key push in February 1965.

After spending the summer ministering on the south side of Chicago, Sacred Heart collegians Eugene Fisher and John Clark created the Student Human Relations Education in Action Cell. The group organized weekends that spring in which a pair of seminarians would make overnight “home visits” to an African-American family and talk about race relations. After the seminarians spent Saturday night at the family’s home, they and the family would then travel on Sunday to a white family’s home in the suburbs to continue the conversation.

“We knew from experience the best way was to sit down with real people,” Clark told the Detroit Free Press on March 6, 1965, noting that close to 90 percent of the seminary’s college students had participated.

It was no surprise then when 400 students and faculty members from the seminary, led by rector Msgr. Francis X. Canfield, were part of a group of 4,000 in Detroit who on March 9, 1965, joined marches across the country to protest violence in Alabama over civil rights. “The seminarians bore a large placard pledging themselves to ‘Christian Justice,’” the Detroit News reported. “They also carried a gold and white papal flag.”

The nationwide event was organized to show solidarity with peaceful African-American and white marchers in Selma, Ala., who two days earlier had been attacked with tear gas and beaten by state troopers after they crossed a bridge out of the city on a march to the state capital. A total of 17 marchers were hospitalized and 50 treated for injuries in what became known as “Bloody Sunday.”

On that Tuesday, demonstrators again would attempt to march from Selma to Montgomery, but this time, the marchers included at least three priests from Sacred Heart’s faculty: Fr. Jerome Fraser, Fr. Bill Cunningham and Fr. Paul Berg.

Writing for the March 11 issue of The Michigan Catholic newspaper, Fr. Fraser told of his entry into Selma:

“My flesh quivered as we passed the spot where the tear gas was used and where the posse had assembled to ride into the praying, kneeling demonstrators on Sunday. There is real tension here and the stares of people, police and troopers made me feel it.”

Yet a crowd of 4,000 locked arms and followed Dr. Martin Luther King Jr., marching over the bridge where they were stopped by state troopers with a federal injunction near the same spot as Sunday’s confrontation. King asked the marchers to stop and pray, and then led them back to town.

“We were defeated on Sunday — gassed, beaten, brutalized,” King told the marchers as recalled by Fr. Fraser. “Today those who came have prevented this from happening again. This has been a victory.”

In the early morning hours of July 23, 1967, Detroit police raided an unlicensed after-hours club at Twelfth Street and Clairmount Avenue. More than 80 people packed the club, celebrating the return of two Vietnam veterans. A crowd soon gathered to protest the police action. Unable to make a mass arrest, the police retreated. “Bottles were tossed, windows were broken, and chaos quickly spread throughout the city …,” according to a fall 2017 article recounting the civil disturbance published in the seminary’s magazine, the Mosaic.

As the day wore on, the violence increased. A fire broke out on Twelfth, but crowds prevented firefighters from extinguishing it. As night fell, Detroit Mayor Jerome Cavanaugh enacted a curfew and banned the sale of alcohol and firearms.

On July 24, the Michigan State Police and Wayne County Sheriff’s Department were called in to help the overmatched Detroit Police Department. But the looting and arson of both white- and black-owned businesses only escalated. U.S. President Lyndon Johnson authorized the use of federal troops, as thousands of Michigan Army National Guardsman, U.S. Army paratroopers, and Michigan State Police joined forces to subdue the looting and arson and hunt down snipers. Tanks and combat troops equipped with machine guns roamed the city on July 25 and July 26. Margaret Cronyn, editor of The Michigan Catholic, set the scene in the July 27 issue:

“Helicopters flew so low you could see the guns in the hands of the soldiers aboard … the shrill sirens of the fire engines sounded constantly in the neighborhood background.”

By July 27, National Guardsman were ordered to sheathe their bayonets and turn in their ammunition. Troops began withdrawing on Friday, and the U.S. Army had left completely by Saturday, July 29.

In the end, 43 were dead — 33 African-Americans and 10 white individuals — 1,189 injured, more than 7,000 arrested, and up to $144 million in property was damaged or destroyed, according to the American Insurance Association.

Sacred Heart Seminary escaped the violence relatively unscathed. One priest was mistaken for a sniper and shot at by state troopers while watching the rioting from the seminary’s bell tower, but other on-site priests felt little apprehension, the Mosaic article notes: “We felt like an island isolate,” said Msgr. Edward Baldwin. Fr. Paul Berg agreed: “It was as if it was taking place elsewhere, on TV. We didn’t feel threatened.”

However, the seminary’s statue of the Sacred Heart of Jesus offered stark evidence of the disturbance when its face, hands, and feet were anonymously painted black on July 23. Msgr. Canfield hand wrote that day that “3 Negro men paint statue brown. Observed by seminary faculty and a lady living nearby.”

The painting of the statue sparked controversy, as letters for and against poured into the offices of both the seminary and The Michigan Catholic. As rector, Msgr. Canfield left the statue as is, telling the Detroit Free Press on Sept. 9, 1967, “Most of us here interpreted it not so much as an act of vandalism as a gesture that the Negro wanted to feel Christ was for him as well as for the white man.”

But the tensions of the civil disturbance flared up, as three unidentified white men painted the statue back to white on Sept. 14, according to Msgr. Canfield’s handwritten notes. He quickly ordered seminarians to paint the features back to black.

The original painters of the statue have never been identified, although a Detroit resident by the name of Joe Nelson claimed credit in a July 23, 1992, article in the Detroit Free Press. Nelson, a housepainter who was African-American, said he had driven by the statue for years, always seeing worshippers kneeling in prayer. “Would they still pray if Christ was black?” the then-41-year-old Nelson said he wondered on July 24, 1967. He grabbed a paint brush and a can of black enamel from his truck and painted the extremities.

However, the timing of Nelson’s story does not align with Msgr. Canfield’s handwritten notes that the painting occurred on July 23.

Seminarians such as current Archbishop Allen H. Vigneron of Detroit and Bishop Earl Boyea of Lansing were not in class during that summer of violence, and returned in the fall to find the statue painted black. Bishop Boyea called the painting a “great blessing” for the seminary: “It was a sign that we are not somehow immune to what takes place all around us, and it is a call to be engaged.”

“I thought it was a very significant sign of our neighbors recognizing that we are a Christian community but also reminding us that means we are in communion with them,” he said.

Mary Massingale is a freelance writer who worked with Sacred Heart Major Seminary to research and write a book documenting its history and service to Detroit and the new evangelization in celebration of the school’s centennial.