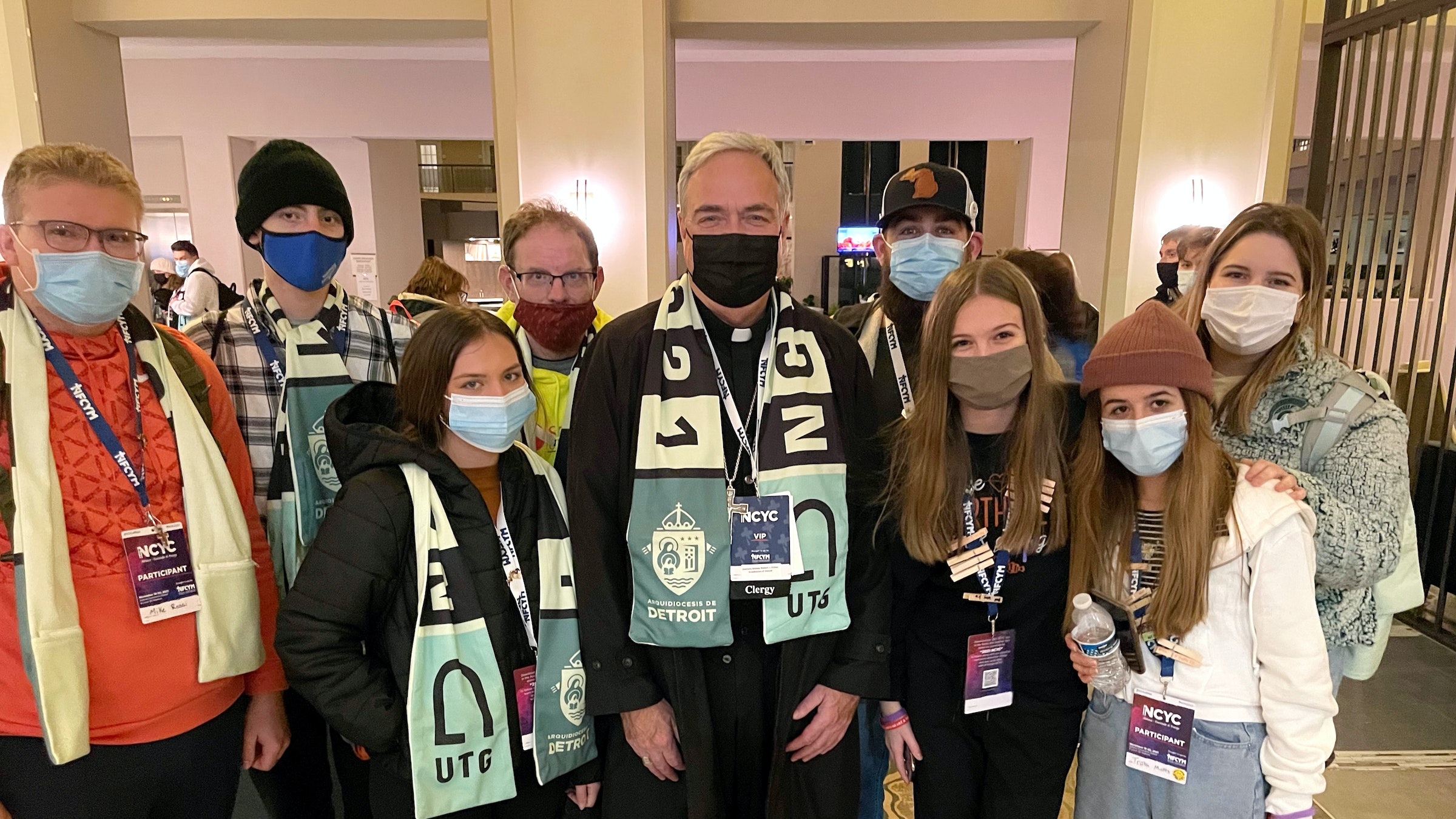 Teens from St. Edith Parish in Livonia pose for a photo with Detroit Auxiliary Bishop Robert J. Fisher during the National Catholic Youth Conference at Indianapolis' Lucas Oil Stadium. Seven busloads of teens and chaperones from the Archdiocese of Detroit attended the three-day conference. (Photos courtesy of Laura Piccone-Hanchon)

INDIANAPOLIS (CNS) — For many youths, group adoration on the second night of the National Catholic Youth Conference is the part of the event they look most forward to and find most memorable.

And it is indeed memorable. For as raucous as the energy of nearly 11,000 spirited, joyful teens is, just as palpable is their reverent silence when kneeling together before Christ in the Blessed Sacrament.

The juxtaposition became especially clear throughout the evening of Nov. 19 in Lucas Oil Stadium in Indianapolis as the evening began with upbeat Christian music the young people jumped and sang to.

But as soon as the Eucharist was brought into the space in a procession, the partylike atmosphere changed. Kneeling, the youths watched in silence as the monstrance was placed on an altar. 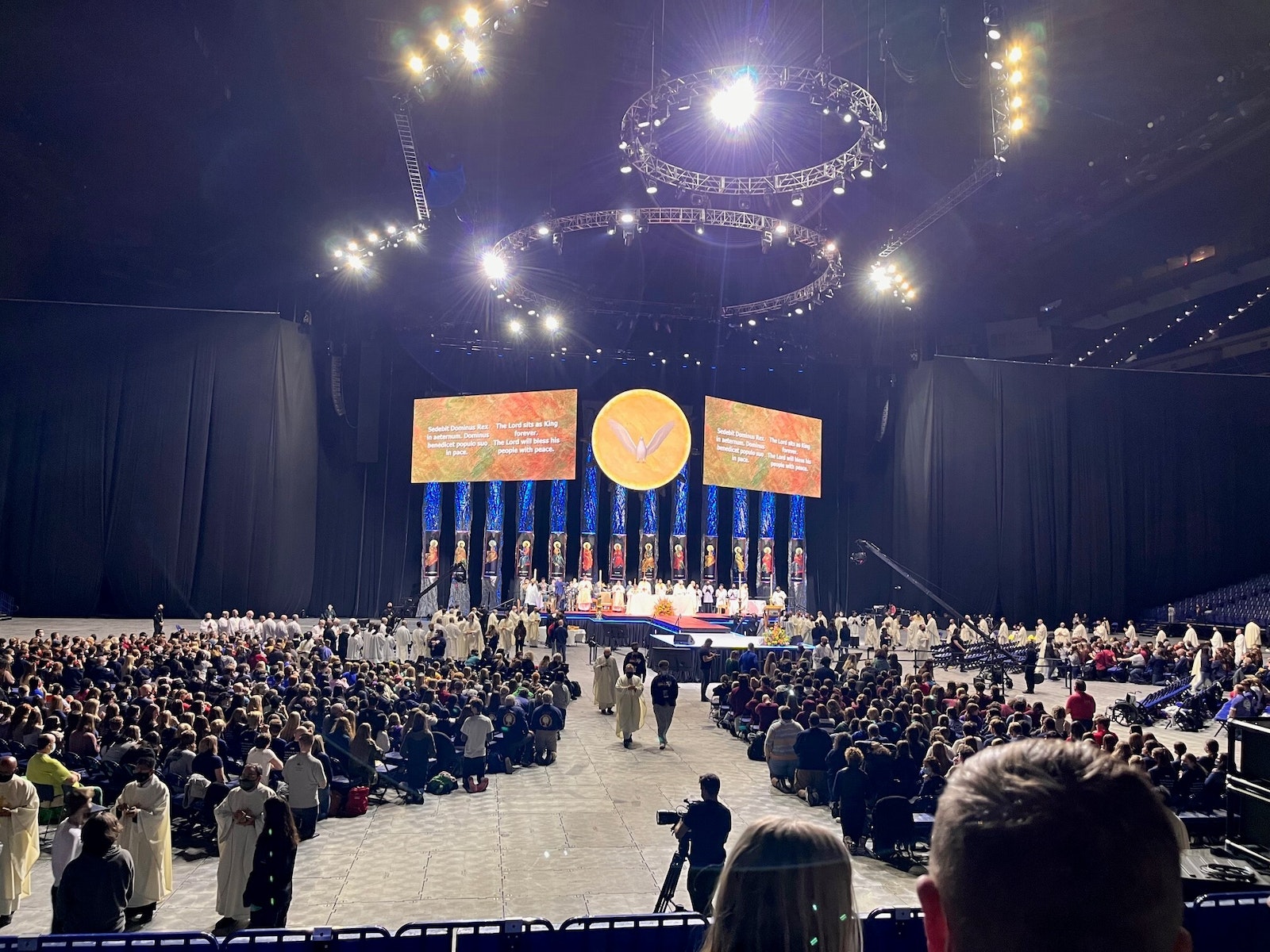 The next hour was consumed in silence and reverent music, broken only occasionally by the voice of Fr. Leo Patalinghug, a priest-member of a community of consecrated life called Voluntas Dei ("The Will of God"). He led the adoration service.

First he helped the young people enter into conversation with Christ.

"Let Jesus tell you how he sees your life, not in condemnation but in how beautiful he made you."

After time for quiet reflection, Fr. Patalinghug spoke about the real presence of Christ in the Eucharist. He shared how scientists who studied consecrated hosts from eucharistic miracles determined two things.

"One thing that scientists were able to discern is that the blood type is AB+ like on the Shroud of Turin, making it a universal recipient -- anyone can take that blood type and make it their own," he explained. 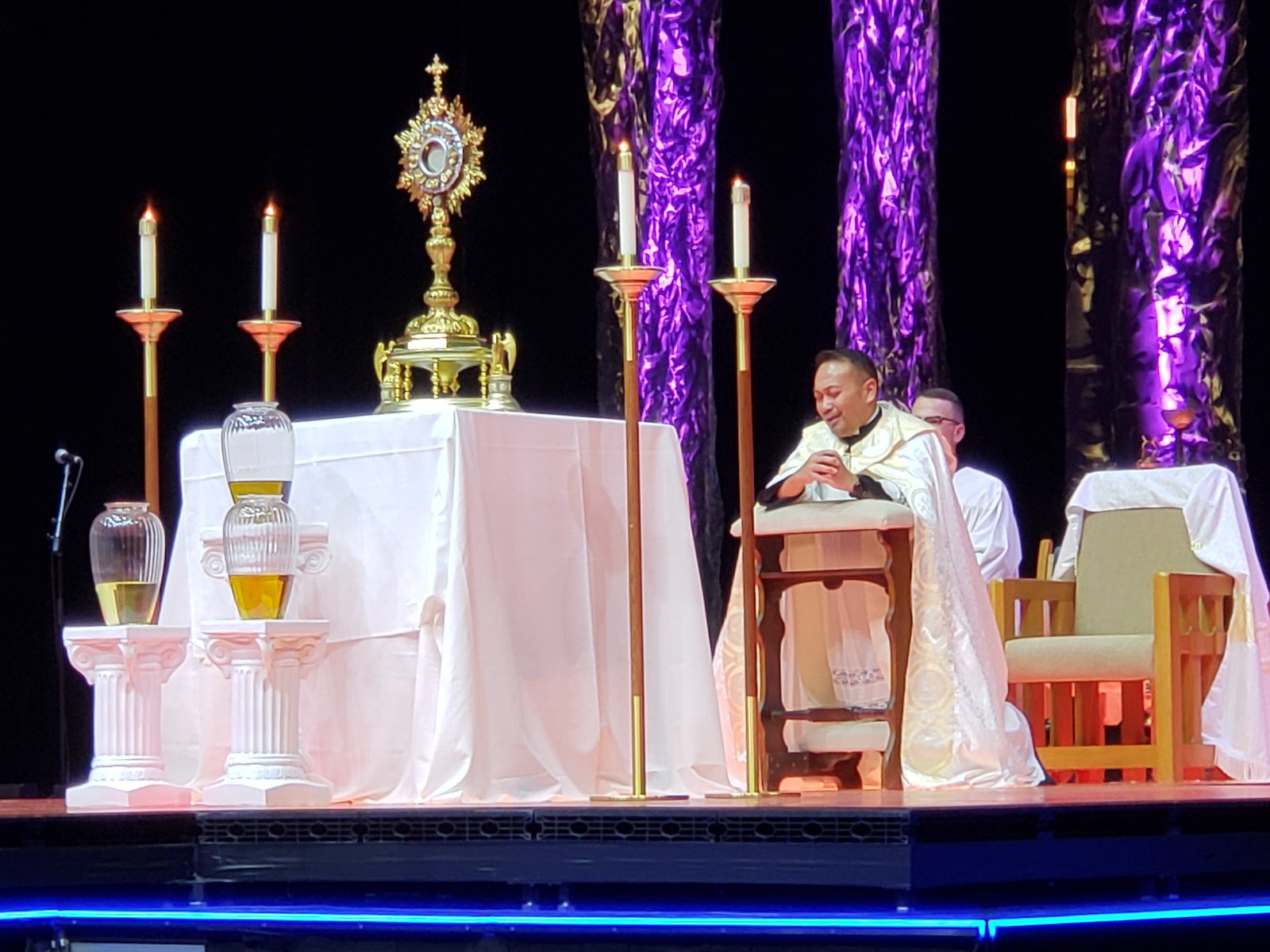 Father Leo Patalinghug speaks to the nearly 11,000 participants at the National Catholic Youth Conference while kneeling before the Blessed Sacrament during adoration at Lucas Oil Stadium in Indianapolis Nov. 19, 2021. (CNS photo/Natalie Hoefer, The Criterion)

"They also discovered very impressively that when the host turned to flesh, that it was actually myocardial tissue -- heart muscle."

"Could it be, then," he continued, "that the traditional prayer 'Jesus Christ, make my heart like unto thine?' that it is real? Could it be that when we say at Mass, 'We lift up our hearts up to the Lord,' that it's a mutual exchange — I give you my heart Lord, because my heart is broken, and he gives us his?

"Think in your heart what needs to be healed in your life today. Let Jesus in as the divine physician."

More reflection and music followed before Fr. Patalinghug's final words to the youths.

"I would ask you if you want to become a saint, and you might say, 'Ain't no way I'm going to become a saint.' And that's because the devil is lying to you and you are listing to him," he said.

"With Christ, all things are possible. You can be a saint — you are supposed to be a saint. 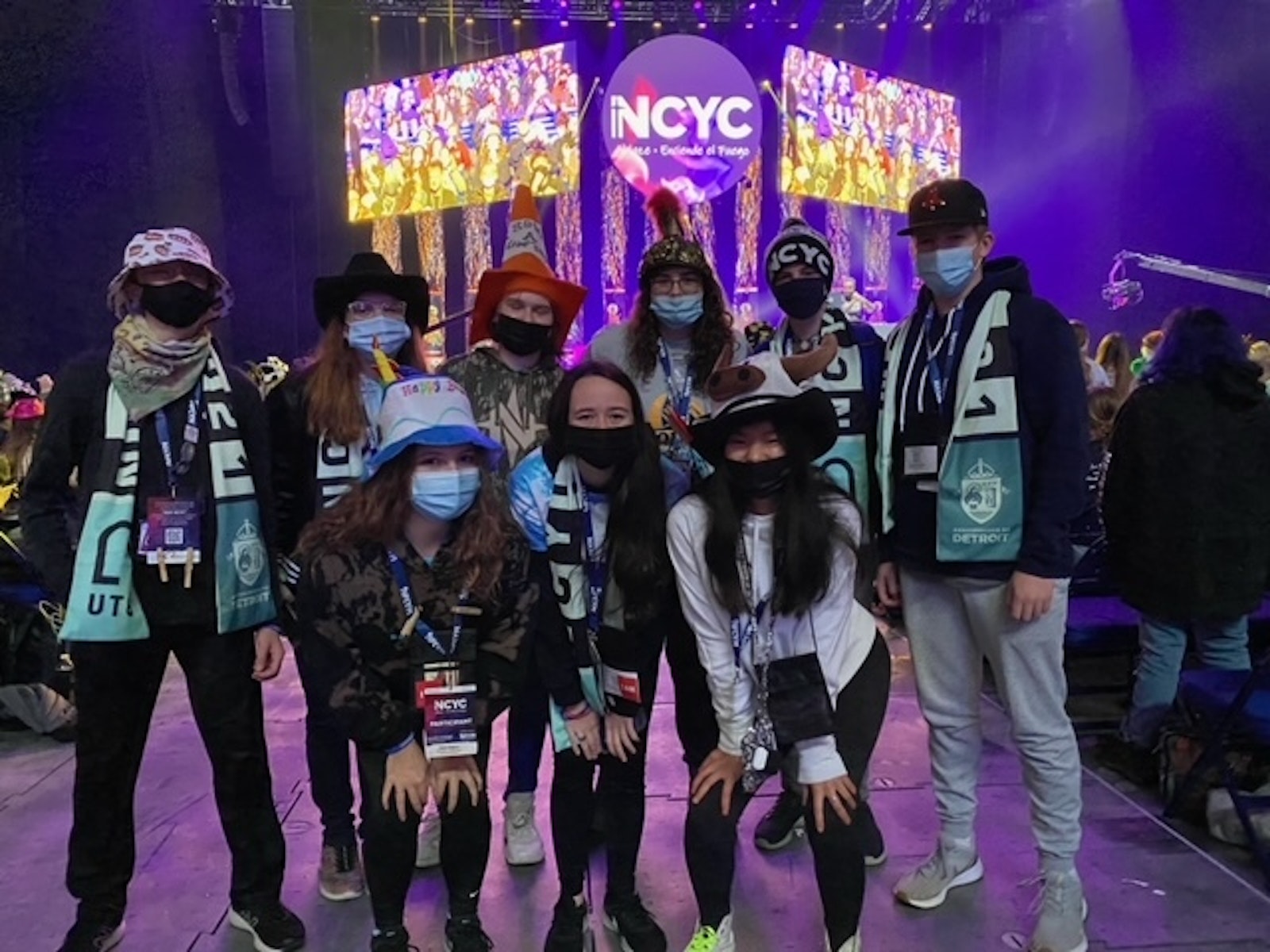 "In your heart, ask Jesus to root out whatever needs to be rooted out of your heart, to have the strength to go to confession, to put in you the virtue to be holy and to give you holy friends and people to get back on the right track."

The impact of the encounter with Christ was visible. Hands were folded and heads were bowed in prayer. Tears streaked the cheeks of some, while others raised their hands in praise.

The Archdiocese of Detroit sent seven busloads of young people and chaperones to the conference, with 12 of the archdiocese's 16 vicariates represented. Many of the Detroit-area teens participated in some of the conference's on-stage activities, including singing and speaking parts.

Several of the teens spoke afterward of the profound impact the conference had on them.

“I grew in my faith because I was constantly reminded that God was always with me and that He cares about me," said Taylor Campbell, a high school senior and parishioner at St. Patrick Parish in White Lake. "It made me feel very loved.” 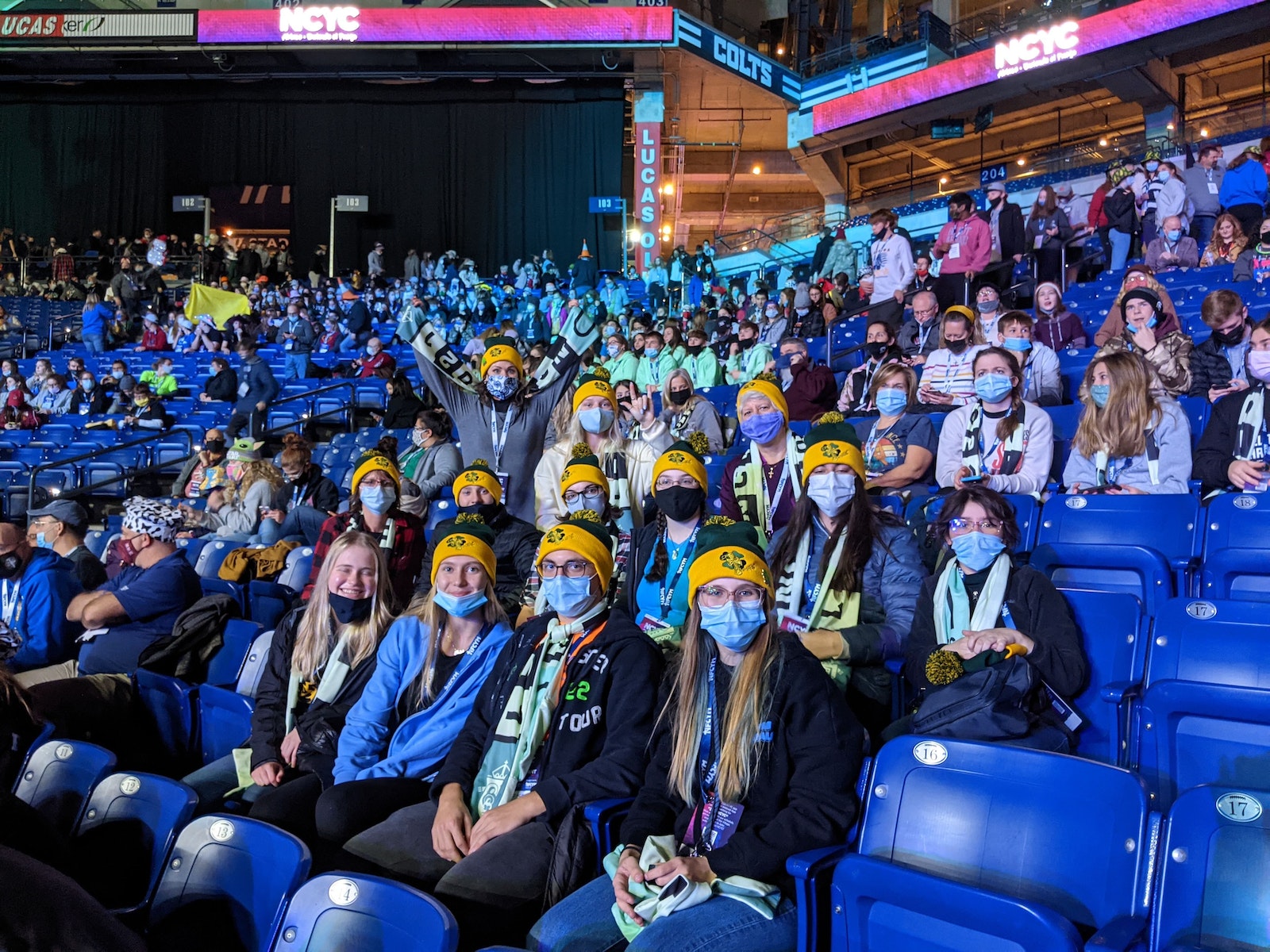 Young people from St. Patrick Parish in White Lake and St. William Parish in Walled Lake get ready for the keynote speaker at Lucas Oil Stadium in Indianapolis.

The three-day conference looked different than most NCYC events, in particular because of COVID-19.

One major decision affecting the look of NCYC this year was the determination to limit the number of participants to half of the normal 20,000. Including young people and all those contributing behind the scenes, the number participating this year was nearly 11,000.

All were required to submit either proof of receiving the COVID-19 vaccine or results showing a negative COVID-19 test result within 72 hours of the event.

Face masks also were required to completely cover both nose and mouth. Volunteers offered gentle reminders when spotting a mask dangling from an ear or tucked under a chin.

This year, the National Federation of Catholic Youth Ministry also offered a virtual NCYC. While the numbers fluctuated through the course of the livestreamed event, the average number of virtual participants was about 2,000. 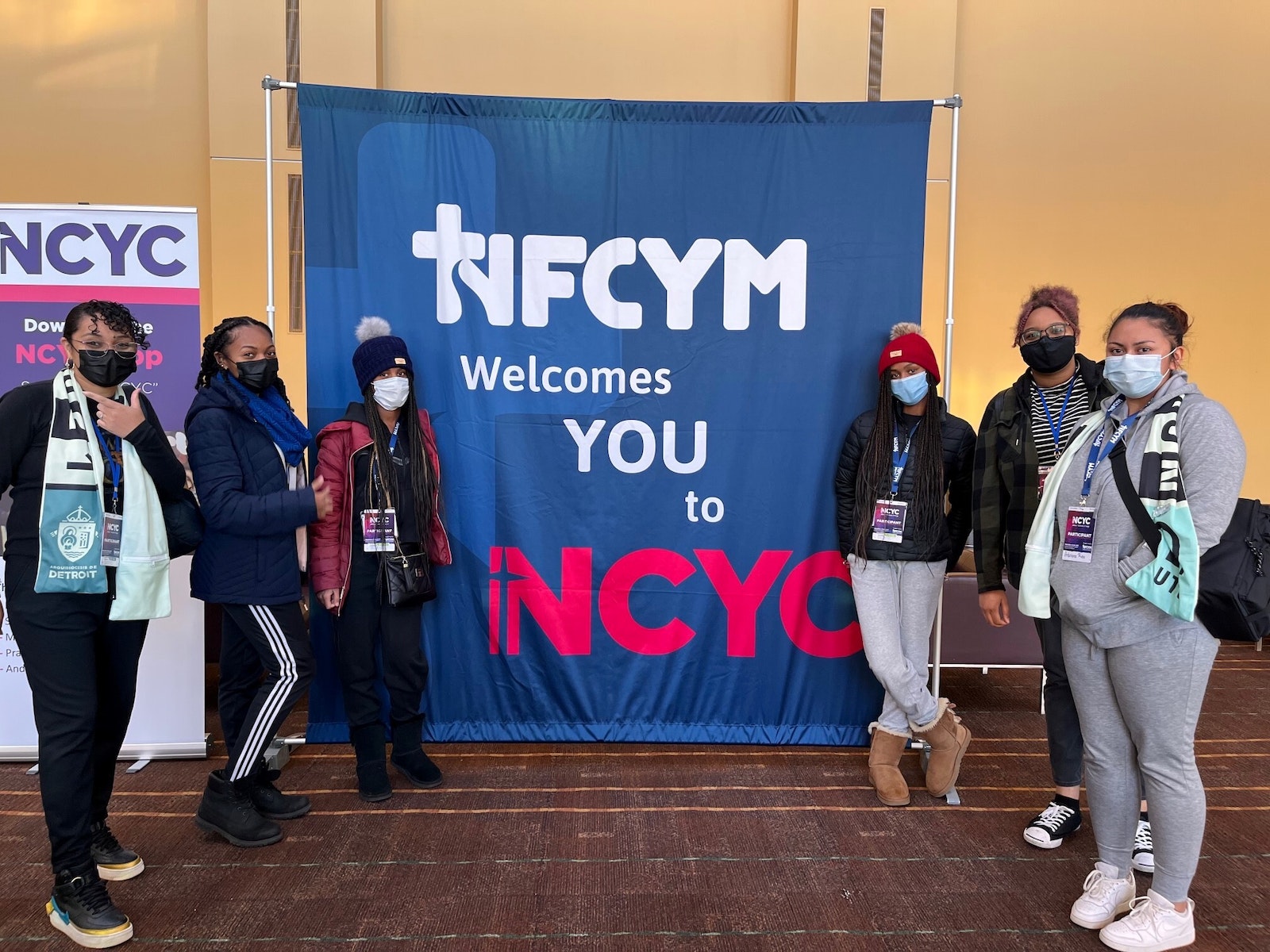 Youth from St. Juan Diego Parish and Corpus Christi Parish in Detroit post with a welcome banner at the National Catholic Youth Conference in Indianapolis. Teens from 12 of the Archdiocese of Detroit's 16 vicariates were represented at the three-day conference.

Laura Piccone-Hanchon, associate director of youth ministry for the Archdiocese of Detroit, said COVID-19 protocols were closely followed among the Detroit contingent.

That didn't stop teens from experiencing a profound encounter with Christ throughout the event, however. From the energy and joy of speakers giving witness to their own personal testimonies, to powerful praise-and-worship sessions, reconciliation and musical performances, many young people came away with a newfound sense of faith.

Alec Alfes, a freshman and parishioner of Christ, Our Light! Parish in Troy who is preparing for confirmation, said the event helped bring him closer to God.

“NCYC has deepened my faith," he said. "I now feel completely ready to receive the Holy Spirit at confirmation. NCYC was truly one of the greatest experiences I have ever had. I would not trade my time at NCYC for anything.” 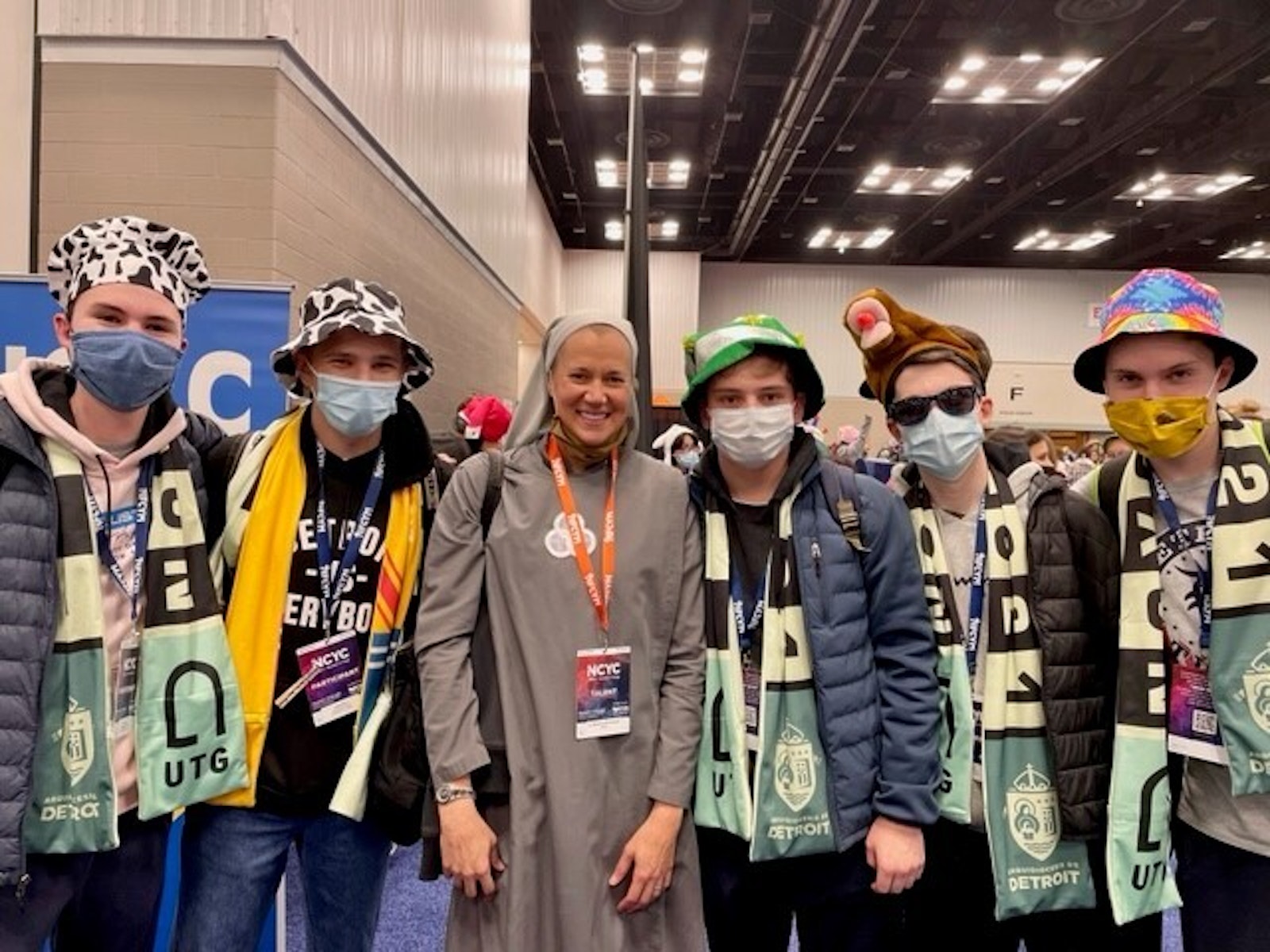 Teens from St. Kenneth Parish in Plymouth and St. Mary, Cause of Our Joy Parish in Westland pose with Sr. Miriam James Hiedland, SOLT, at the National Catholic Youth Conference in Indianapolis.

For Sarah Friedmann, a senior at Bishop Foley High School in Madison Heights and member of Guardian Angels Parish in Clawson, the experience brought to life what the Archdiocese of Detroit's "Unleash the Gospel" movement is all about.

“I feel more empowered to go out into the world as a joy-filled missionary disciple," Friedmann said. "The wonderful network of support present in youth ministers, chaperones and speakers reminded me of the beauty of community in the church and pushed me further to pursue a relationship with Christ.

"I am thankful for the friendships that I have made and strengthened, the discoveries I have made about Christ and myself, and for the encouragement to take my place as a youth in the church,” she added.

Ryan Perez, 17, of the Archdiocese of Baltimore, said it was "so powerful seeing so many people come together to worship our God. The Spirit in the room was just overflowing. It was really a life changing experience."

During one point in adoration, 17-year-old Jaidn Asch of the Syracuse Diocese, stood and hugged those on either side of him.

"My soul was just filled," he told The Criterion, newspaper of the Archdiocese of Indianapolis. "That led me to feel the true love of God, which made me want to just spread his love to others. Me and my friend here have been close for a while and I wanted to show love to him, and to my brother here, just having this feeling that my soul was filled.

"I go about my day and I get busy, and I'm trying to prove my worth. My soul gets empty, but my soul was filled here. It's something I've been chasing my whole life."