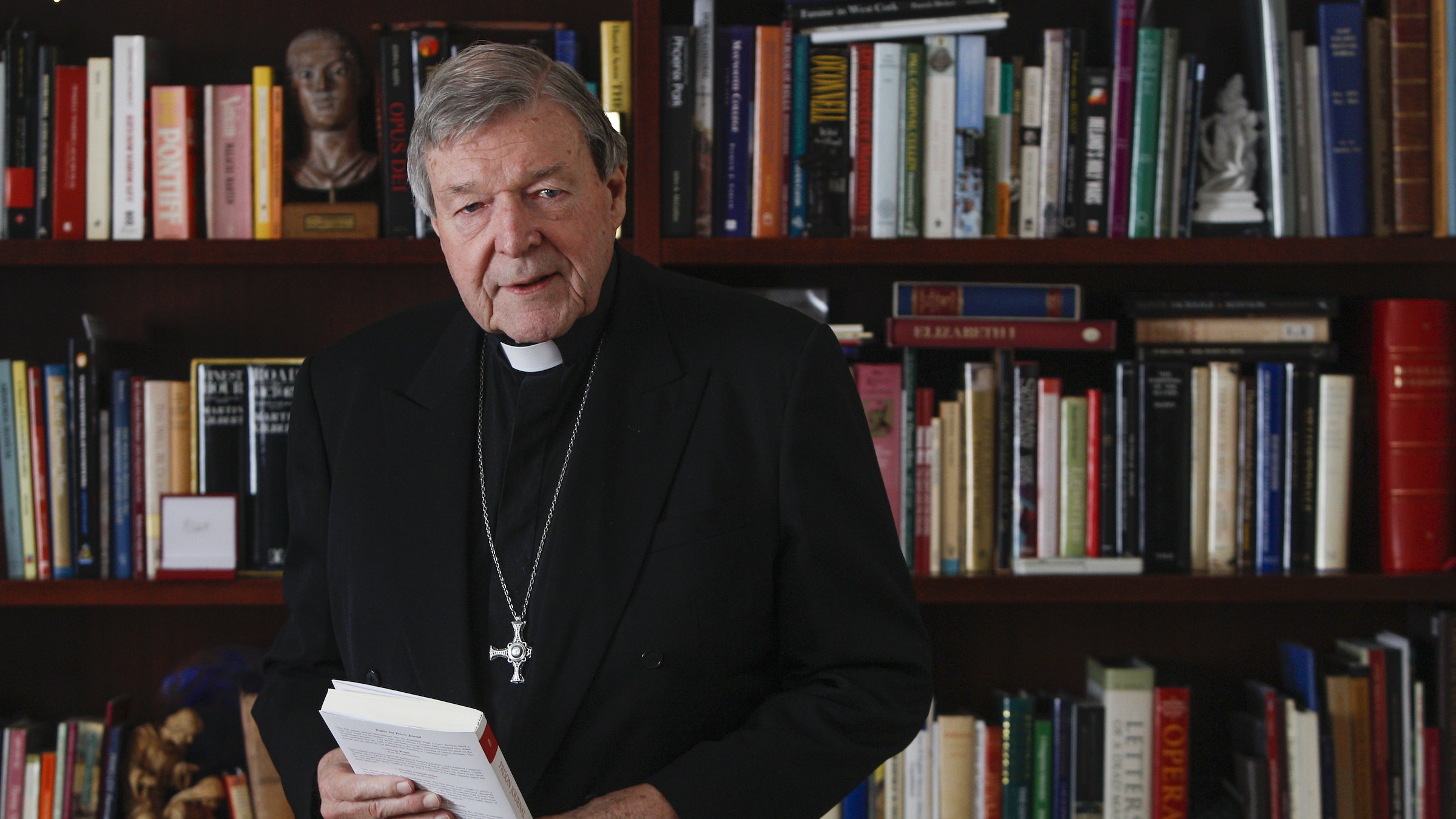 Australian Cardinal George Pell holds a copy of his book, "Prison Journal," during an interview with Catholic News Service at his residence in Rome Dec. 18, 2020. Jesuit Father Frank Brennan, an Australian legal scholar, said he believes the proceedings against Cardinal Pell were the result of a political vendetta against the prelate. (CNS photo/Robert Duncan)

SYDNEY (CNS) ─ Victoria's policing and criminal justice systems erred so seriously in relation to Cardinal George Pell that it shows that not even victims of abuse or bona fide complainants, let alone an accused person like the cardinal, could rely on them, said Jesuit Father Frank Brennan, Australian legal expert.

The law professor and rector of Newman College at the University of Melbourne attended key parts of Cardinal Pell's trials and appeals and had access to court transcripts.

He became convinced that the cardinal was innocent of the historical sexual abuse charges brought against him and that he should never have had to face them.

In an exclusive interview with The Catholic Weekly, newspaper of the Archdiocese of Sydney, Father Brennan was scathing in his assessment of the police work conducted under the former Victoria Police Commissioner Graham Ashton and subsequent failures that saw Cardinal Pell imprisoned for 13 months until his release through a unanimous decision of the High Court of Australia in April 2020.

Father Brennan's latest book, "Observations on the Pell Proceedings," was published in April. His exclusive 8-page analysis by of the entire case will appear in the Sept. 5 September edition of The Catholic Weekly.

Father Brennan said he "cannot forgive" the actions of the Victorian Police and the Victoria director of public prosecutions in the cardinal's matter and believes they were the result of a political vendetta against the prelate.

These caused both the cardinal and his accuser months of unnecessary agony and had consequences for genuine complainants and victims of abuse, he said.

"All of us, including those of us in the church, but also victims and bona fide complainants, need to be assured that the legal system was doing its job," said the priest.

Father Brennan, an adjunct professor of law at the Thomas More Law School at Australian Catholic University, said the Royal Commission into Institutional Responses to Child Sexual Abuse had done the necessary work in shedding light on "deficient" management structures in the church that had put children at risk. But along with a separate Victorian parliamentary inquiry, this also resulted in an environment where the cardinal could become a scapegoat.

Upon his appointment as archbishop of Melbourne in 1996, Cardinal Pell had established the Melbourne Response in consultation with the Victorian Police and Victorian legal authorities, yet there was still a perception that he had failed to make necessary changes in the interests of children in the church, Father Brennan added.

"Sadly, the two most senior judges of Victoria, the chief justice and the president of the Court of Appeal, I think were infected with the same sort of mentality that the juries had when they came to this case.

"They were not sufficiently dispassionate to look at the evidence and say there's no way at all that a jury could be convinced on this."

Father Brennan was commissioned by the Australian Catholic Bishops' Conference to observe the court proceedings and report on them once a suppression order was lifted.

He said he became convinced of the cardinal's innocence when prosecutor Mark Gibson, whom he knew to be "an honorable man and a good lawyer," struggled in vain to find the six minutes when the offending against two choristers after a solemn high Mass in St. Patrick's Cathedral was alleged to have occurred. But that was only one of the many serious problems with the case against the cardinal.

"You're left thinking of the enormous resources the police invested (when all they were) interested in was getting Pell charged," Father Brennan said.

"They knew that by getting him charged, they would have destroyed his reputation, and that's what it was, a sting operation."

While the case "did no favors" to Cardinal Pell or the Catholic Church, it also did not help victims or bona fide complainants, Father Brennan said.

The priest said he is appalled that both the cardinal and his accuser, known as Witness J, "were put through extraordinary agony of different sorts by incompetent policing and by a director of public prosecutions who should have known much better than to make a show trial of this one."

Despite some public differences on a number of issues, the Jesuit said that his relationship with the cardinal has grown "quite friendly" over the past two years.

"I would say that he is an honorable man, and having got to know him more as I did, I was left in even less doubt, if that was possible, that he could have possibly done what was alleged," Father Brennan said.

Rodrigues is a reporter for The Catholic Weekly, Sydney.