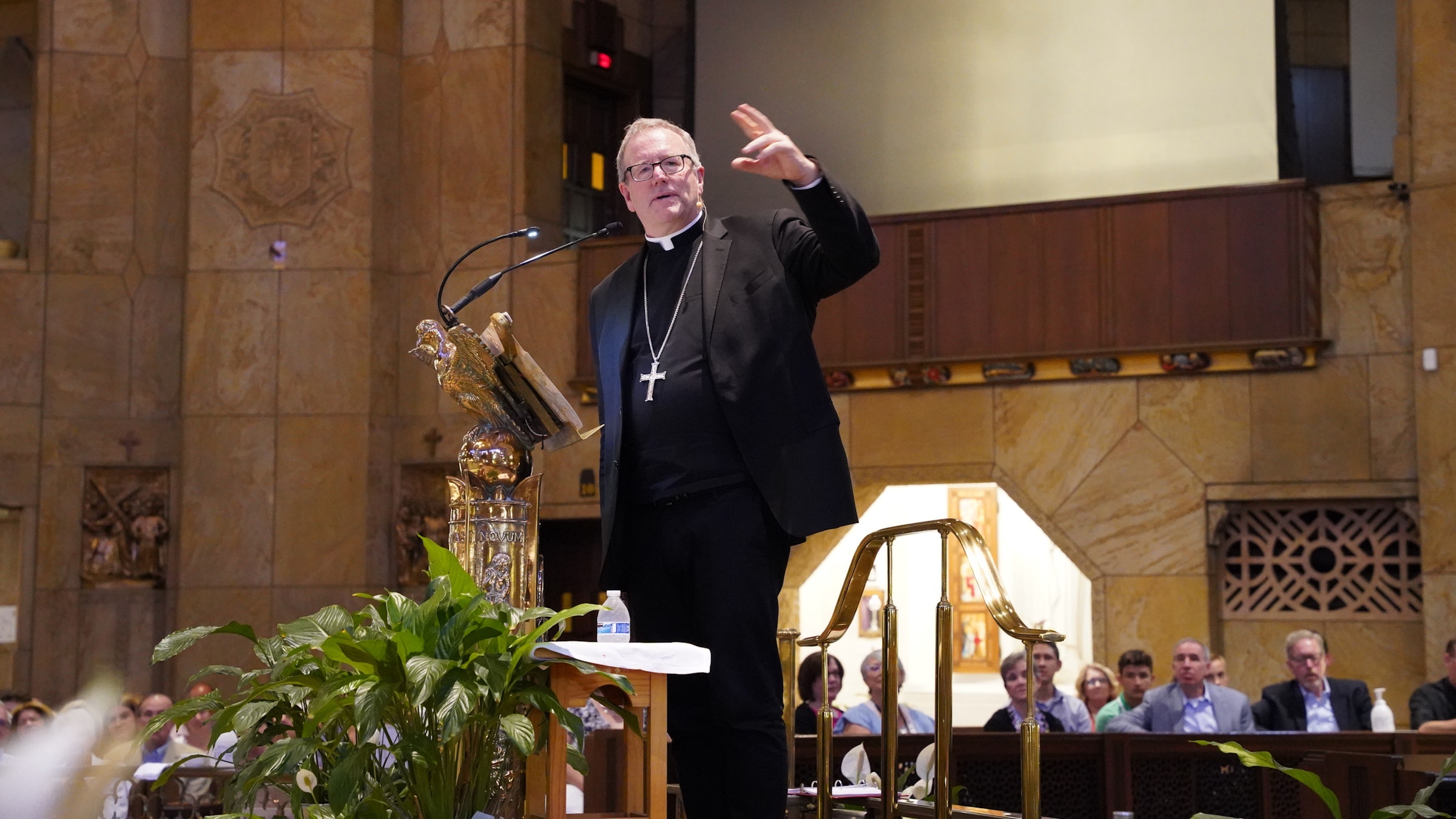 Bishop Robert Barron, founder of “Word on Fire” and bishop of Winona-Rochester, Minn. was the keynote speaker at the “Live at the Basilica” at the National Shrine of the Little Flower Basilica in Royal Oak on Aug. 11. Bishop Barron spent part of his childhood in Metro Detroit and recalls his mother pointing out the basilica when they drove past the Royal Oak parish. (Photos by Daniel Meloy | Detroit Catholic)

‘Word on Fire’ founder, Winona-Rochester bishop recalls growing up in southeast Michigan during ‘Live at the Basilica’ talk

ROYAL OAK ─ Bishop Robert Barron returned to his Detroit roots on Aug. 11 to give a talk on the “Little Way” of St. Thérèse of Lisieux in a basilica named in her honor.

Bishop Barron, informally known as the “bishop of the internet” with a wide social media following, his critically acclaimed “Catholicism” film series, and Reddit “Ask Me Anything” appearances, was the keynote speaker for a “Live at the Basilica” event hosted by the National Shrine of the Little Flower Basilica in Royal Oak. The popular speaker series has seen prominent Catholics come to the parish to give talks and reflections on different aspects of the faith.

Still, the bishop recalls his time growing up in Troy, attending Holy Name School in Birmingham, supporting the Detroit Tigers – now dubbed his “American League team” – and his mother pointing out the National Shrine of the Little Flower whenever they drove down Woodward Avenue. 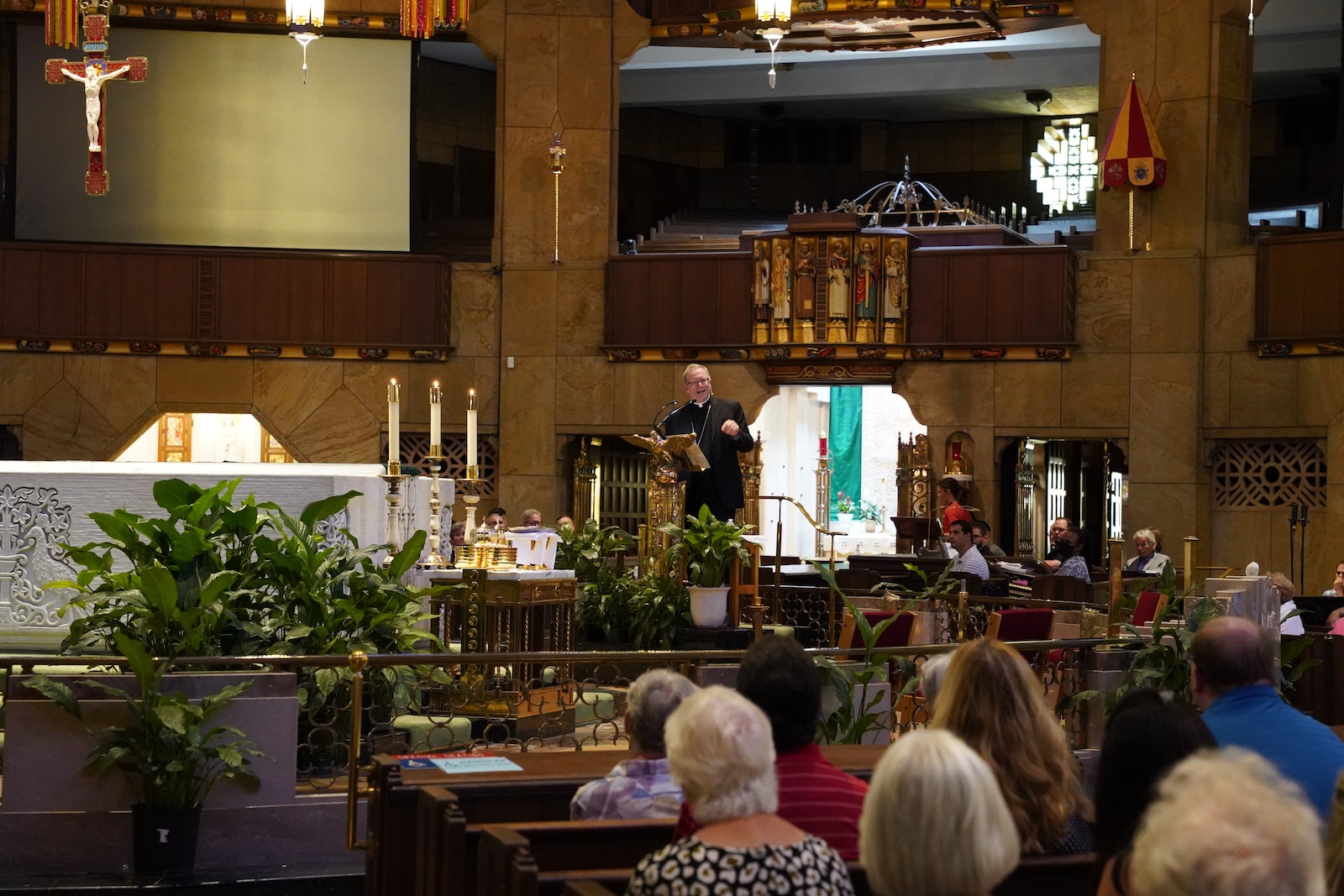 Bishop Barron recalls the “Little Way” St. Therese of Lisieux wrote about in her biography “The Story of a Soul.” Bishop Barron spoke about how St. Therese described God’s mercy like a small child reaching out to their parents waiting to be picked up.

Naturally, Bishop Barron spoke about St. Thérèse of Lisieux and her famed spirituality of the “Little Way.”

“I’ve been there, to Lisieux, where you (see) this fascinating basilica, spectacularly decorated and attracting millions of people every year,” Bishop Barron said. “It’s dedicated to this young girl who entered the convent at age 15 and died nine years later. When she died, her sisters in the convent wanted to put something together to send to the Carmelites in France, but one of them said, ‘What would we say about her?’ because they thought her life was so undistinguished. Yet, within a few decades of her death, this nobody, this hidden figure who died at 24, would be one of the best-known saints of the world.”

Bishop Barron admitted that during formation, he never had a great devotion to St. Thérèse of Lisieux (1873-1897), the Carmelite Sister who was beatified in 1923 and canonized in 1925. National Shrine of the Little Flower Basilica was one of the first churches named after St. Thérèse, built in 1926.

But that changed during a trip through Europe with a friend, Fr. Tom O’Connor of Ireland. The two had just come from Lisieux in northwestern France and were stuck in a train station in Tubingen, Germany, late at night. They were having a hard time contacting the person they were going to stay with for the night. Worried they had the wrong telephone number in pre-cell phone times, they were approached by a young blonde woman neither Bishop Barron nor Fr. O’Connor knew, who offered to help.

“She goes to the phonebook, calls this number and comes back to us and says, ‘You two are all set. I got two rooms for you not far from here down the street,’” Bishop Barron recalled. “I turned to Tom and said she found us two rooms, no kidding, and we turned around to thank this woman, and she was gone, left in a second. All through this trip, we heard stories of how St. Thérèse appears to people and helps in the littlest ways. We looked around for her, couldn’t find her, and I look at Fr. Tom, and he looked at me, and we simultaneously said, ‘St. Thérèse.’” 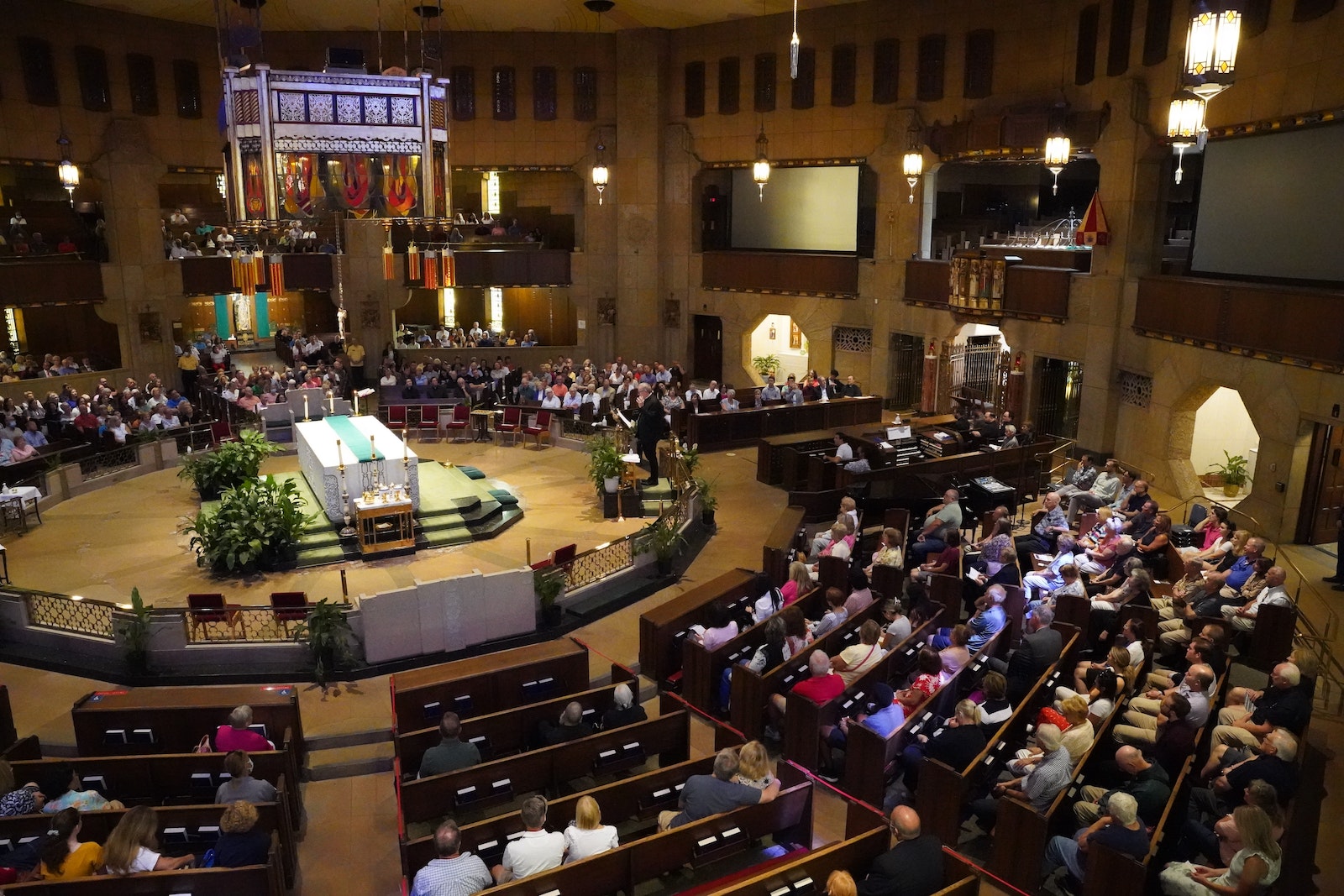 That incident made Bishop Barron more interested in the Little Flower, and he found many Catholic intellectuals such as Dorothy Day, Thomas Merton, Edith Stein and Pope John Paul II, who cited St. Thérèse as a great thinker in the church for both the depth and simplicity of her spirituality.

“When you read St. John of the Cross, you read this highly intellectual, highly developed spiritual program about different stages of spiritual development and exercises,” Bishop Barron said. “Thérèse says in her writing, ‘I’m not like Therese of Avalon or John of the Cross, I’m like this little child who God the Father calls, and I raise my arms up.’ Now parents and grandparents, what do you do when your child raises up their arms? You can’t resist them, they haven’t accomplished anything, but you can’t help yourself; you pick them up. She says, ‘that is what I’m like with God’s love, a little child who raises my arms up.’”

Bishop Barron went through examples of St. Thérèse’s biography Story of Soul that encapsulate her spirituality of the “Little Way” and what it means to live by accepting divine grace as a gift.

A particular episode he cited is when St. Thérèse’s family was returning from Midnight Mass, and she overheard her father being glad it was the last year he would have to hide candies in the children’s shoes.

St. Thérèse was upset about this revelation but decided not to wallow in misery. Instead, she quietly went along with the family custom to keep the tradition alive for the others in the family.

“She is upstairs and says, ‘OK, I’m not going to dissolve into tears, I’m not going to let this destroy me,’” Bishop Barron said. “‘In fact, I’m going downstairs, pretend I never heard it and celebrate with the same enthusiasm as everyone else.’ She thinks of that Christmas night, the night that celebrates the birth of Jesus, that is the night when Christ, in a serious way, was born in her because she decided to perform the simplest act of love (rather) than give into her own ego. A simple yes, welcome to the ‘Little Way,’ doing the simplest things with great love.” 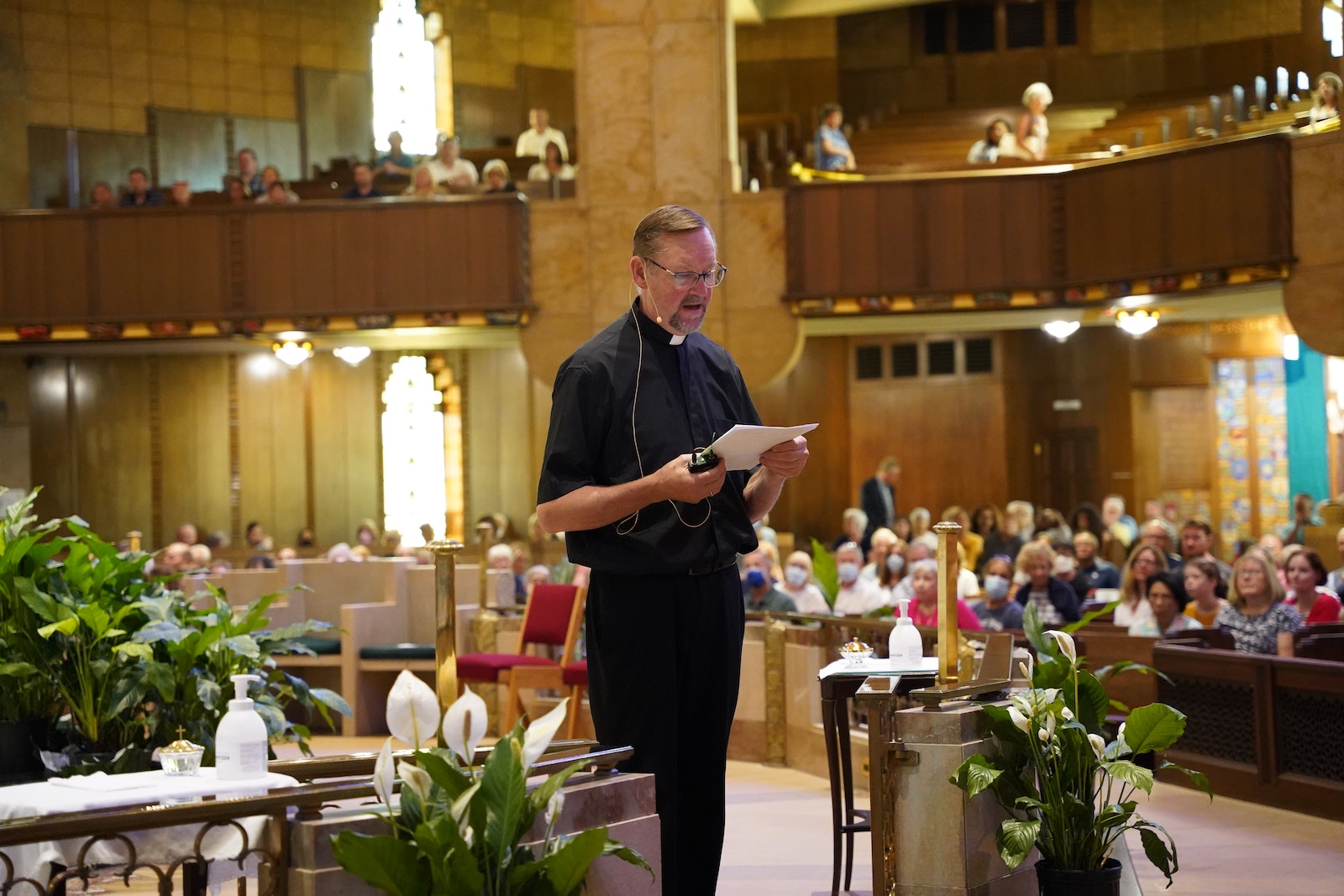 Fr. Joe Horn, rector of National Shrine of the Little Flower Basilica, introduced Bishop Robert Barron to the audience during the “Live of the Basilica” event. Fr. Horn himself received an ovation for recently returning to the parish after dealing with health issues.

Thinking back to his time growing up in Troy, Bishop Barron liked St. Thérèse’s emphasis on the primacy of grace and the joy of receiving God’s grace, to the dependence he had on his parents. 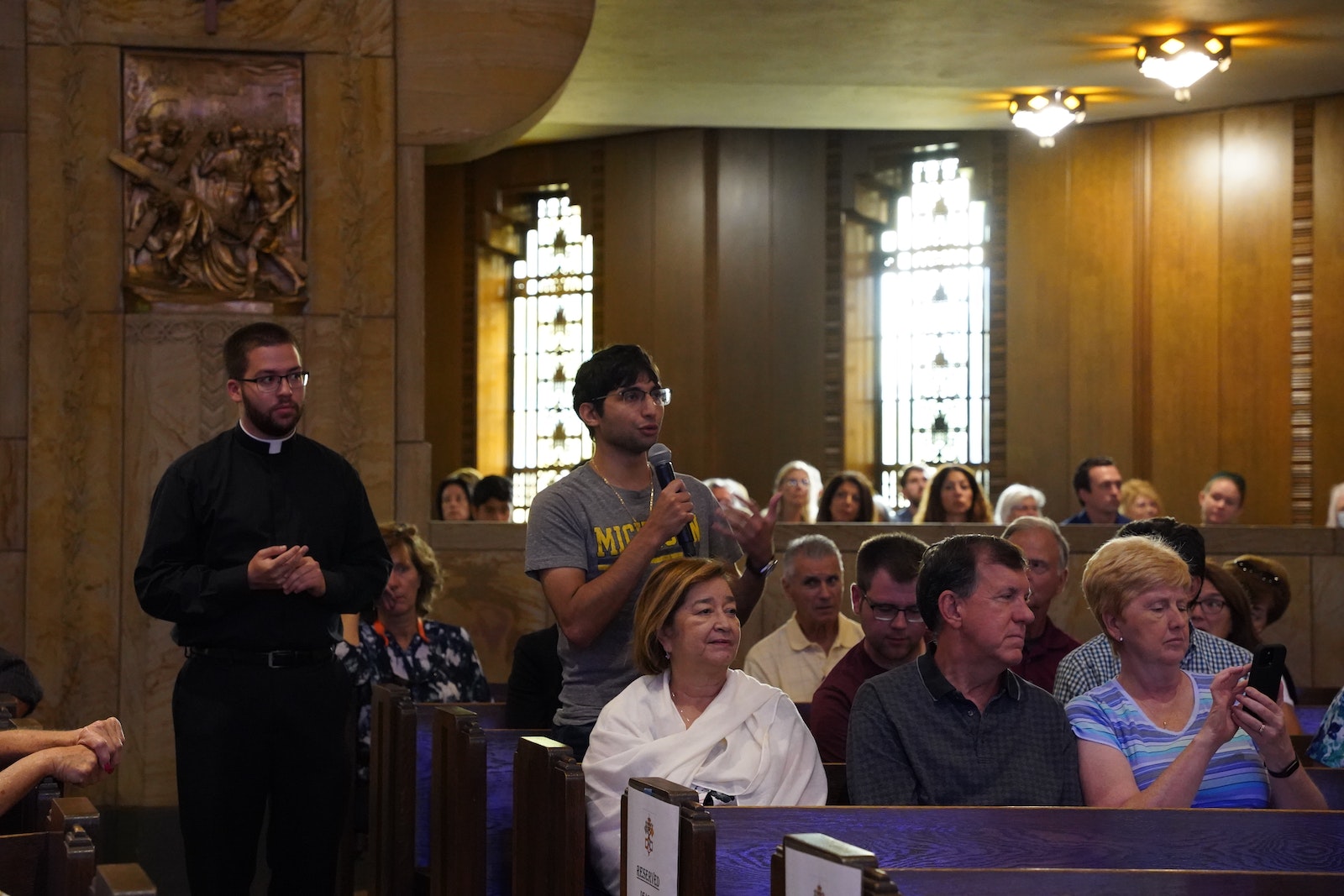 After the talk, Bishop Barron answered a few questions about St. Thérèse of Lisieux, his work with the Catholic media organization Word on Fire and the concept of the “primacy of grace” which the "Little Way" offers.

“Right now, God is providentially involved in all of our lives,” Bishop Barron said. “At this moment, this time, what he wants is for you to love. That’s it – it’s so simple to say. Right now, in this place, is an opportunity to love. No matter what is happening to you. You can respond with great love, resentment or fear. Be like the little child in the presence of God’s providence and be ready to respond to every moment with great love. That is the “Little Way.” 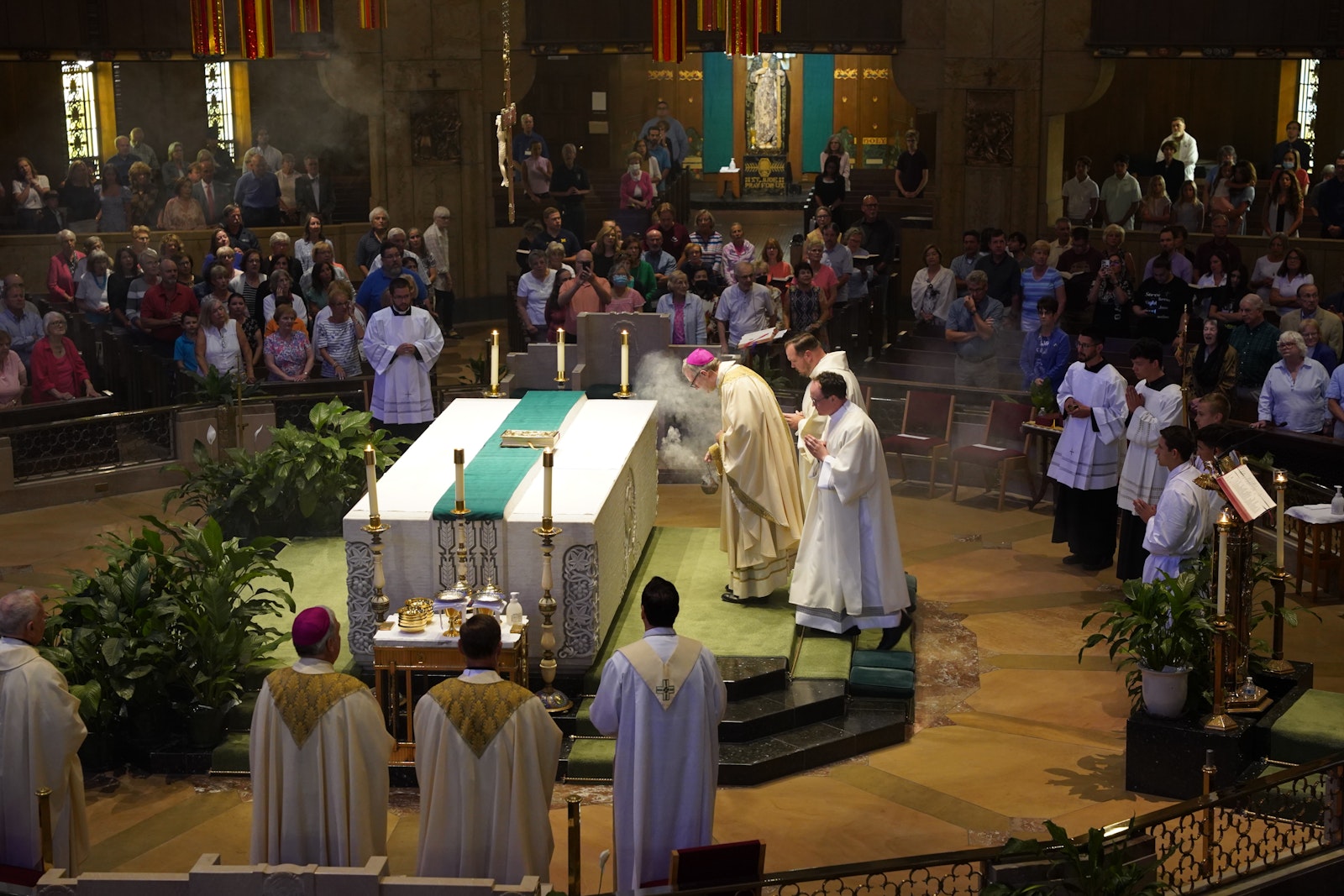 Bishop Robert Barron celebrated Mass after his keynote address during the “Live at the Basilica” event, with Detroit Auxiliary Bishop Robert Fisher and Fr. Joe Horn, rector National Shrine of the Basilica.