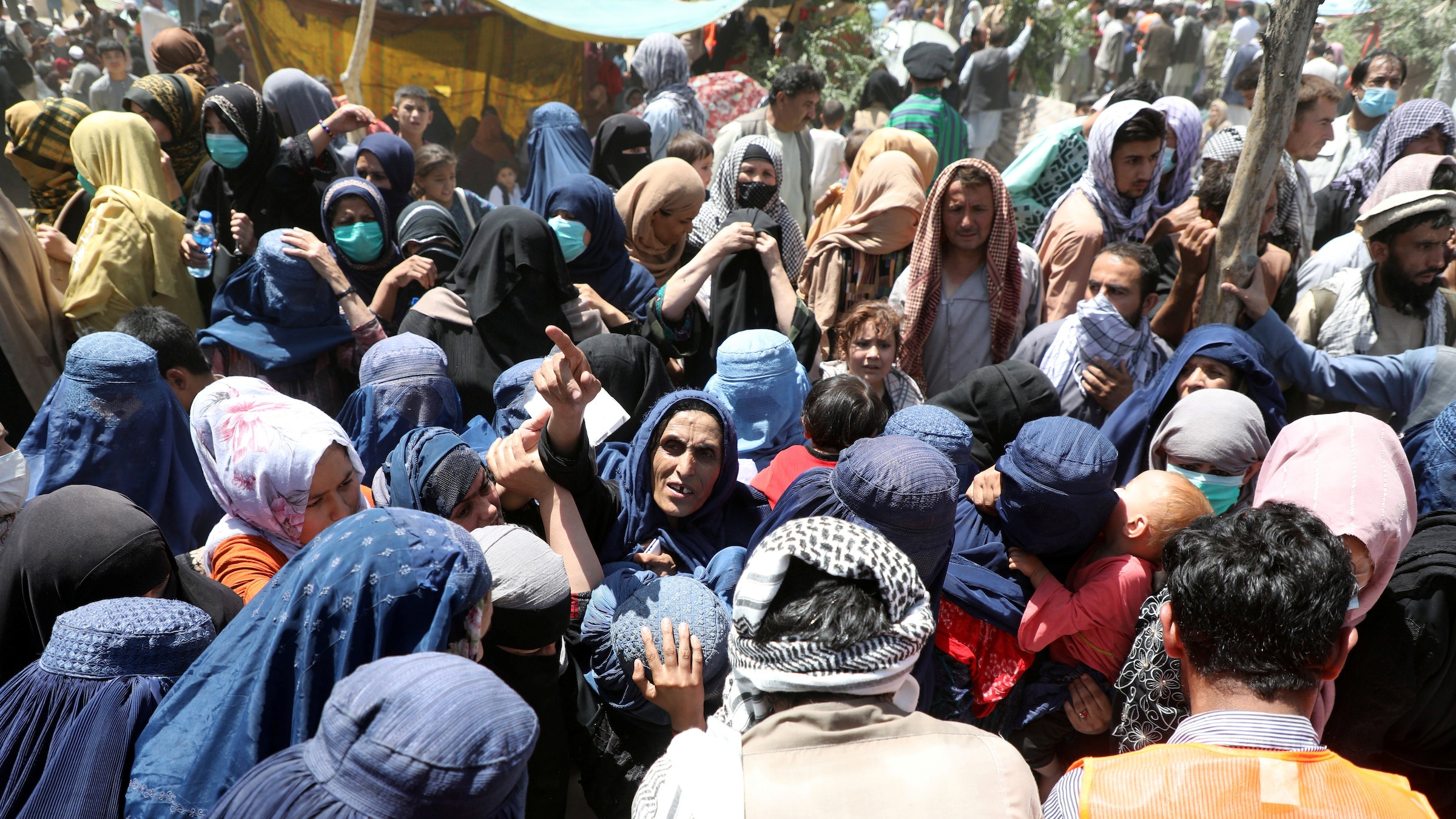 Internally displaced families from northern provinces of Afghanistan, who fled from their homes due the fighting between Taliban and Afghan security forces, take shelter at a public park in Kabul Aug. 10, 2021. (CNS photo/Reuters)

WASHINGTON (CNS) -- Saying that a humanitarian crisis is developing in Afghanistan, the chairmen of two U.S. bishops' committees called on the U.S. government to "act with utmost urgency" to resettle thousands of Afghan citizens entering the country under special immigrant visas.

The U.S. government has said it would resettle up to 30,000 people who have applied for Special Immigrant Visas, or SIVs.

The flow of refugees has been fueled by the rapid takeover of the Afghan government by Taliban forces in the first half of August as the U.S. withdrew its military, which has been in the troubled country for nearly 20 years.

"The government's goal to relocate as many as 30,000 SIV applicants to the United States remains a monumental task that hangs in the balance," said Auxiliary Bishop Mario E. Dorsonville of Washington, chairman of the U.S. bishops’ Committee on Migration, and Bishop David J. Malloy of Rockford, Illinois, chairman of the Committee on International Justice and Peace.

"We know that time is of the essence to help our brothers and sisters in need, and we call on our government to act with the utmost urgency, considering all available avenues to preserve life," the bishops said in a statement released late Aug. 17.

Describing videos and photos of the desperation of Afghan citizens as the Taliban swept into power Aug. 15 as "difficult to view," the chairmen expressed concern for all people requiring evacuation, "as well as Afghan women and girls, who risk losing opportunities gained over the last two decades and now face potential mistreatment.”

The statement also said that the U.S. Conference of Catholic Bishops, Catholic Charities and other agencies have been assisting the U.S. government in working with SIV applicants at Fort Lee, south of Richmond, Virginia.

"We will continue to work as long as necessary until those who are in harm's way are brought to safety," the bishops said.

The statement closed with an offer to join with Pope Francis in praying for peace in Afghanistan, "that the clamor of weapons might cease and solutions can be found at the table of dialogue.”

Meanwhile, Pax Christi International expressed concern for Afghanistan and the Taliban's sudden rise to power, noting the insurgents' history of atrocities that has continued in recent weeks as it expanded its control of the country.

Citing its commitment to nonviolence, the Brussels-based Catholic peace organization said in a statement Aug. 17 that "we are heartbroken by what decades of war and violence have wrought.”

Pax Christi called on the Taliban "to act in accordance with your own dignity as human beings" and to honor its promises "not to take a path of retaliation to create a secure environment.”

"We implore you to reject abusive power, to respect the equal rights of your Afghani sisters and brothers and to recognize in particular the great capacity of women to contribute to the well-being of society," the statement said.

The organization also invited the world community, including the U.S. working through the United Nations, to ensure human rights protections and provide for the safe evacuation of vulnerable Afghans; provide visa or immigration accommodations globally, including Europe and the U.S.; and provide aid to neighboring countries of Afghanistan that are likely to host refugees.

Pax Christi also urged world leaders to increase and negotiate reliable access to humanitarian assistance for Afghanistan and ensure participation of Afghan civil society groups in deciding how humanitarian aid is used and the resettling refugees.

Finally, Pax Christi welcomed prayers for peace for Afghanistan and for efforts to end the suffering the country has endured for decades.