Bishops urged to implement framework for marriage and family ministry 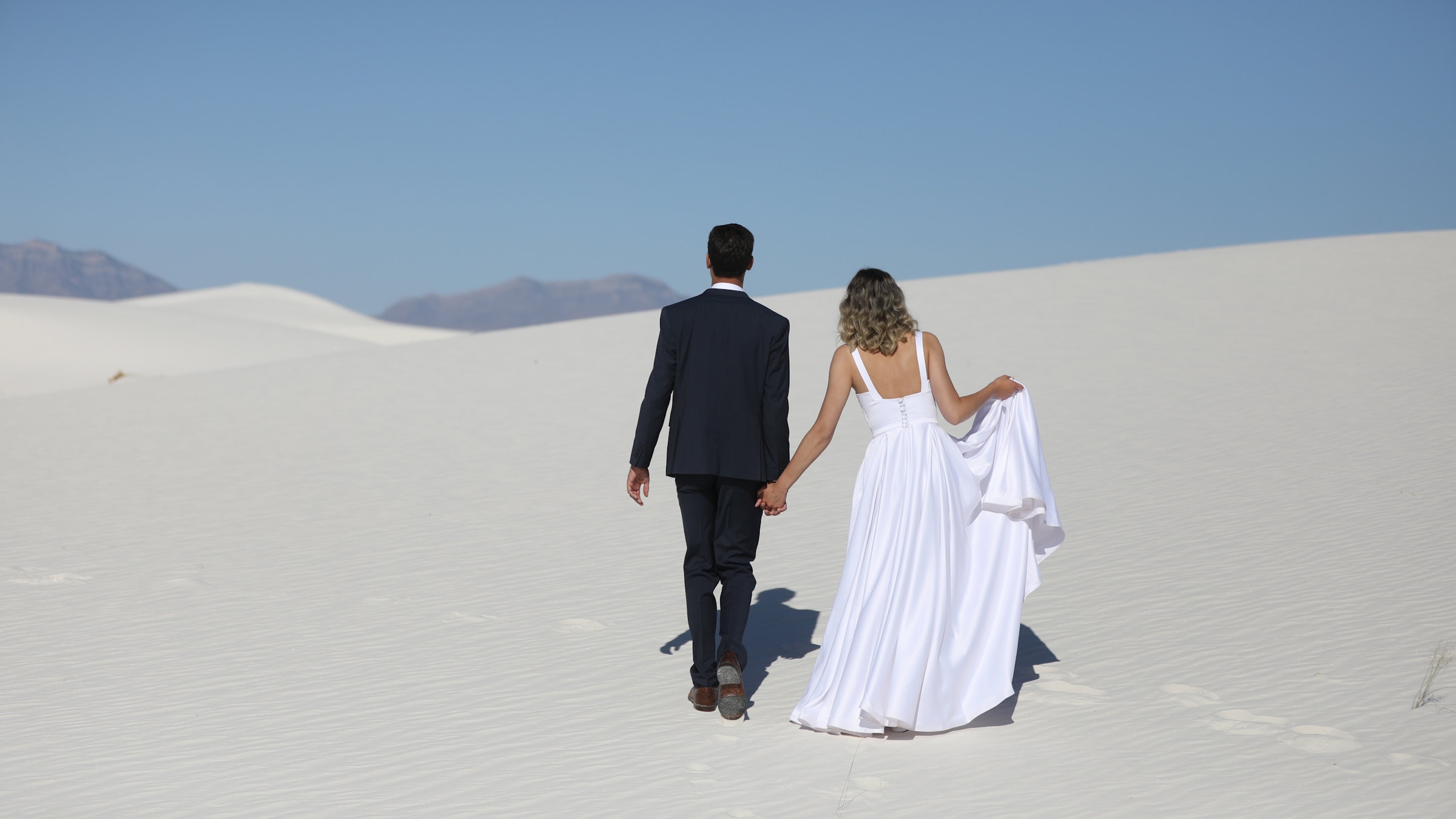 A newly married couple walks over a dune in White Sands National Park in New Mexico's Tularosa Basin May 21, 2021. San Francisco Archbishop Salvatore J. Cordileone called on the U.S. bishops at their Nov. 15-18 fall assembly in Baltimore to work in "every way possible" to implement "Called to the Joy of Love," a national pastoral framework for marriage and family ministry approved in June. (CNS photo/Bob Roller)

BALTIMORE (CNS) -- The chairman of the U.S. bishops' Committee on Laity, Marriage, Family Life and Youth called on his fellow bishops Nov. 17 to work "in every way possible" to implement the national pastoral framework for marriage and family ministry that they approved in June.

Archbishop Salvatore J. Cordileone of San Francisco said that addressing marriage and family life is vital in a time when families are under rising threats from "sweeping ideological currents that destroy and undermine our sexual identity as man and woman and God-given vocations as father and mother, son or daughter."

Bolstering marriage and family ministry is an appropriate undertaking to start during the "Amoris Laetitia Family Year," declared by Pope Francis, the archbishop said in remarks on the second day of public sessions during the U.S. Conference of Catholic Bishops' fall general assembly Nov. 15-18 in Baltimore.

Titled "Called to the Joy of Love: A Pastoral Framework for Marriage and Family Life Ministry," the document can serve as a practical guidebook to serve couples and families because it offers an adaptable set of principles and strategies for pastoral care, Archbishop Cordileone explained.

To help implement the framework, the Catholic Marriage Initiatives Fund, seeded with $1 million, has been established, the archbishop said. Funds will be distributed on a competitive basis in amounts ranging from $10,000 to $50,000, provided a diocese or eparchy can match the amount being awarded.

Applications for the first round of awards are due Dec. 10. Applications are online at CatholicMarriageFund.org.

The archbishop reviewed the contents of the framework, which was overwhelmingly approved by the bishops in June, saying the committee and USCCB staff have developed an implementation and distribution plan to assure it reaches dioceses, eparchies, national organizations and interested constituents.

The framework emerged in response to Pope Francis' apostolic exhortation "Amoris Laetitia" ("The Joy of Love"). The pope issued the exhortation in April 2016 following meetings of the Synod of Bishops on the family in 2014 and 2015.

It grew from the bishops' belief that Catholics families and married couples need more support from the church at large.

It is meant to offer parishes resources and ideas for ministry through a pastoral plan for marriage and family life. It emphasizes the importance of family members being "missionary disciples" and their role "to be actively engaged in evangelization."

The archbishop recalled the words of St. John Paul II in his 1981 apostolic exhortation "Familiaris Consortio," on the role of the Christian family in the world, in which he recognized that the family is "the object of numerous forces that seek to destroy it or in some way deform it."

Continuing to quote the exhortation, Archbishop Cordileone said the church is "aware the well-being of society and her own good are intimately tied to the good family," giving the church a more "urgent and compelling ... mission of proclaiming to all people the plan of God for marriage and the family, ensuring their full vitality and human and Christian development, and thus contributing to the renewal of society and of the people of God."

"We can and must repeat these words of 'Familiaris Consortio' with even more conviction and courage now than 40 years ago," Archbishop Cordileone told the bishops.

The committee chairman identified the framework's four "pillars" for ministry: prayer and relationship with Christ, formation, accompaniment and advocacy.

Under each pillar, various situations are addressed and offer three steps, which Archbishop Cordileone called the "three Es" -- educate, encourage and engage. All are meant to provide practical steps in ministry to aid people in various life situations, he explained.

The framework is currently available in English on the USCCB website at https://bit.ly/3nmPHrM. It will be distributed in print in English and Spanish in the future, he added.

The committee, the archbishop said, has proposed that the framework be implemented over one or two five-year cycles.

The first step would have each diocese and eparchy complete a pre-inventory evaluation tool to assess marriage and family life ministries. The inventory would be shared with the diocesan bishop or eparch as they seek to identify the effectiveness of such ministries.

Archbishop Cordileone said such an evaluation also would "inspire a greater recognition of the fundamental importance of a specific ministry to marriages and families in every stage of life."

A second resource the archbishop identified is a parish resource tool kit, which would help parishes promote the importance of placing families "front and center" in parish life.

The tool kit offers ways to develop a pastoral plan for ministry, encourage the training of marriage ministers and family life ministers, and to inspire families to take an active role in the missionary work of the church by extending outreach to families outside of the parish.

Implementation also calls for a designated website that would include new resources and plans, the archbishop said.

Plans also call for education and formation to help ministry participants to effectively work with the framework in their specific setting, he added.

Such efforts would include diocesan consultation sessions, regional convocations and a series of orientation and discussion sessions encompassing webinars and online workshops for clergy, seminarians, parish staff, organizational leaders and pastoral ministers.