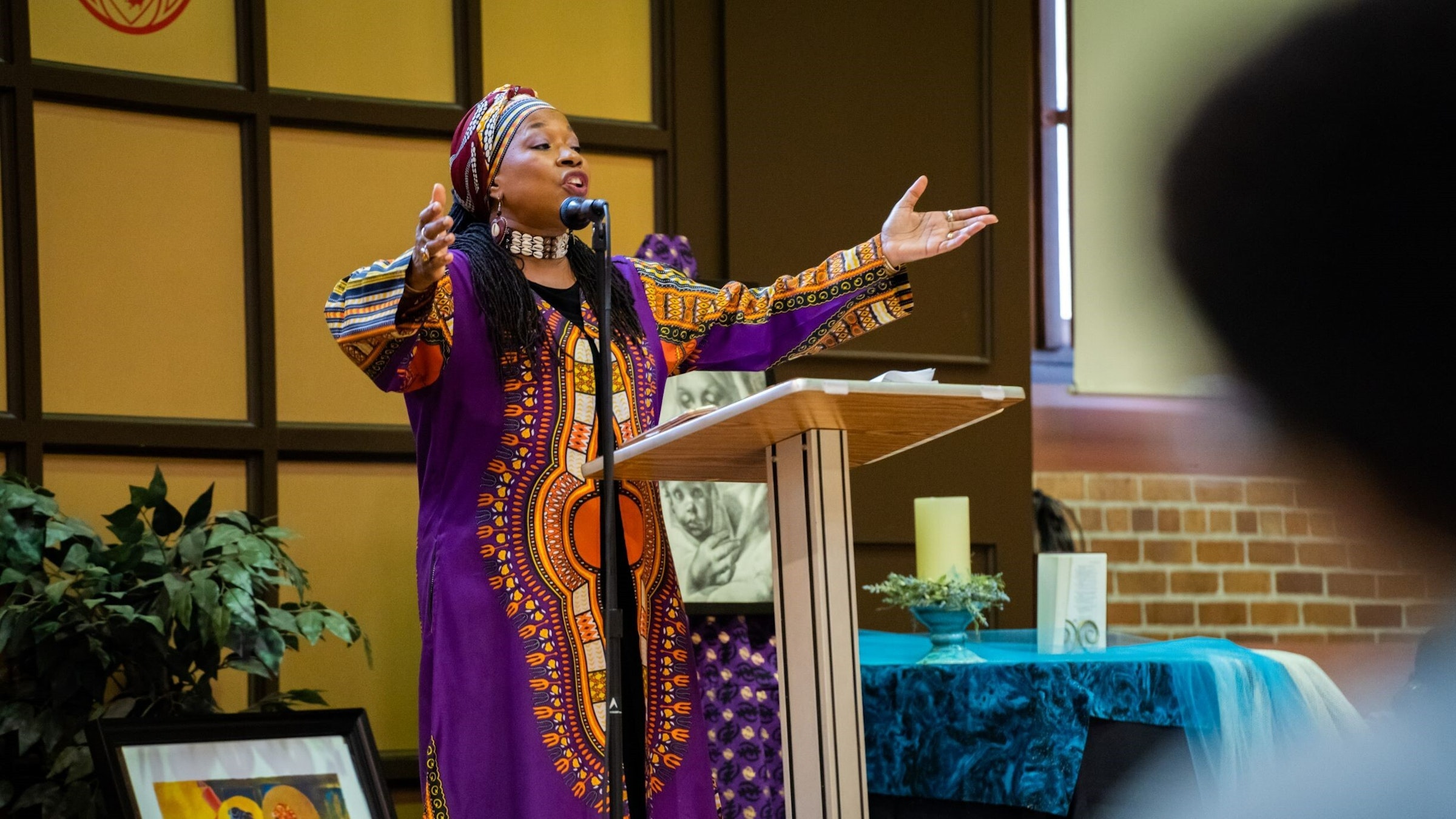 Recording artist, speaker and profession ValLimar Jansen sings during the Black Catholic Women's Conference at Sacred Heart Major Seminary on Aug. 22. The conference was the first time in four years the community was able to gather for the conference, which also featured a panel of medical experts from the Detroit Medical Center. (Photos by Valaurian Waller | Detroit Catholic)

DETROIT — It’s been four years since the Archdiocese of Detroit has hosted a Black Catholic Women’s Conference, but the gathering was just what the soul needed for those who attended.

The Aug. 20 conference at Sacred Heart Major Seminary featured ValLimar Jansen, a nationally known recording artist, speaker and college professor, who spoke to attendees about how to spiritually recharge and focus on “Embracing the Light of Christ,” the conference's theme, in light of recent challenges the community has faced.

“It means a lot in light of the pandemic and some of the social justice ordeals that have happened over the past two years between Breonna Taylor and George Floyd and then COVID; it took quite a toll on the Black community,” Vickie Figueroa, associate director of cultural ministers and coordinator of Black Catholic ministry in the Archdiocese of Detroit, told Detroit Catholic. “It caused us to separate and be separate from each other when we needed to be around each other the most. 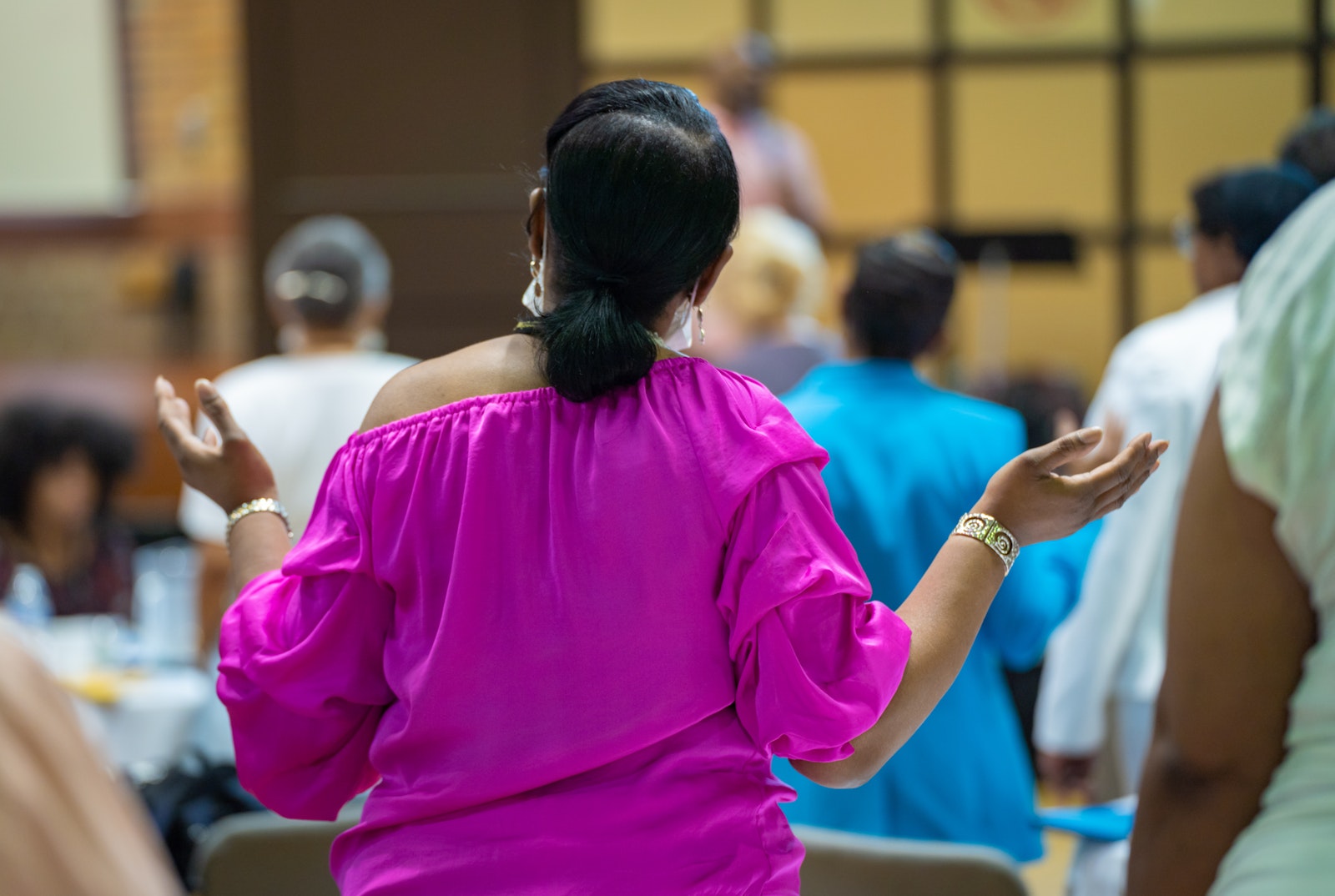 A woman raises her arms in praise during the Black Catholic Women's Conference on Aug. 20 at Sacred Heart Major Seminary in Detroit.

"Having this conference gives us a chance to come back together as a family to heal, be whole, reconnect some of those bonds we have,” Figueroa said.

The conference also featured Kimberly Lymore, M.Div., and her keynote, “Turning Our Mourning Into Dancing,” and a panel of physicians from the Detroit Medical Center who spoke about health issues that specifically impact Black women, such as high blood pressure and cholesterol. Dr. Summer Holmes-Mason hosted a workshop, “Know Your Body — The Facts about Fertility Explained.”

The focus on spiritual and physical health seemed appropriate given the challenges the Black community has faced, Figueroa said.

“Oftentimes, the Black Catholic woman is the head of her household, or the grandmother or the aunt is a kind of guardian of the community,” Figueroa said. “The guardian of the community needs extra strength and nourishing and faith formation in order to keep the family together and keep the family strong. Women need that strength as they encourage men to be good fathers, to be good uncles, to be good sons, caring for the family, but it is very difficult to do that when she is spiritually malnourished.” 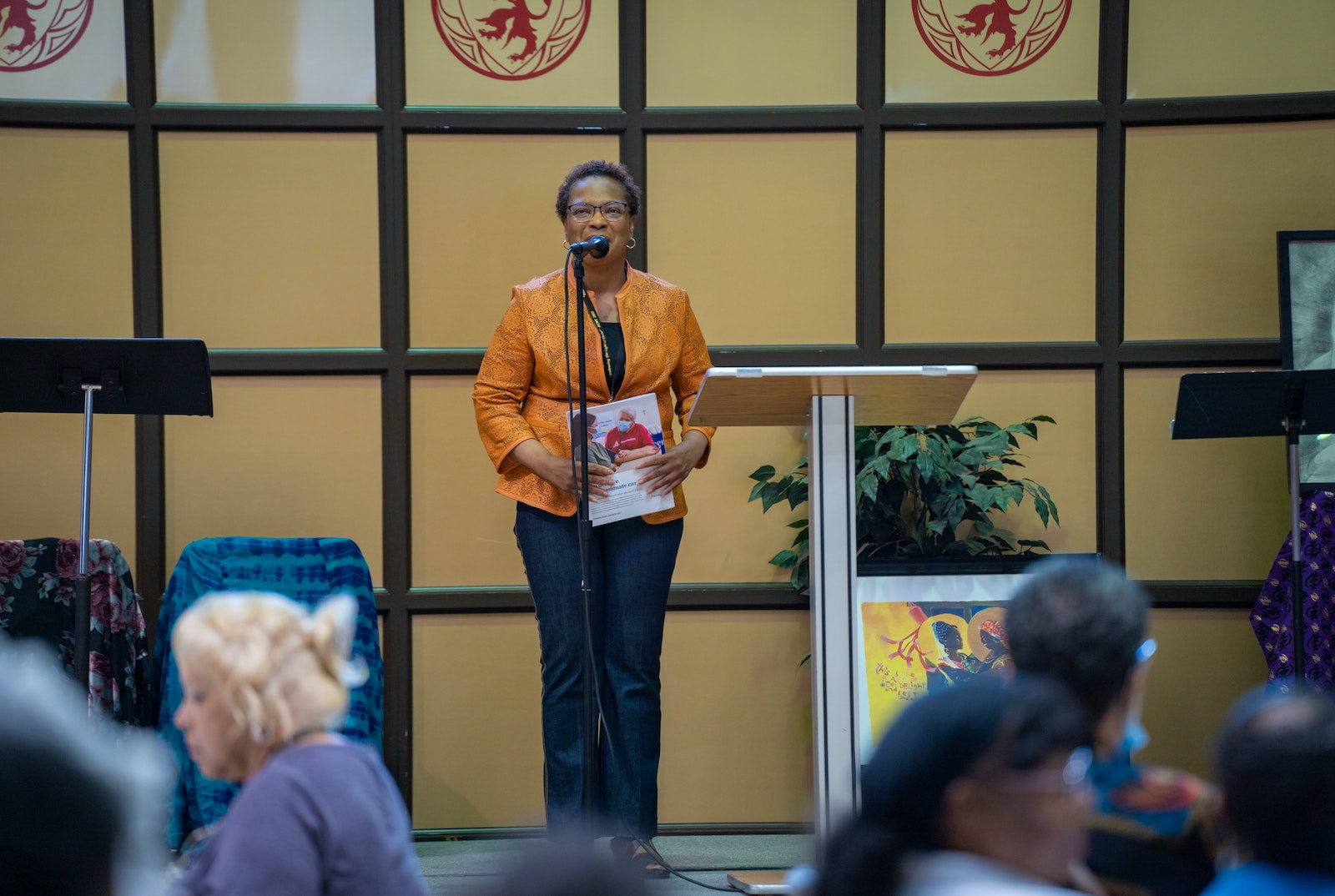 Vickie Figueroa, associate director of cultural ministers and coordinator of Black Catholic ministry in the Archdiocese of Detroit, speaks with attendees during the conference. Often, Black women are the head of their households, Figueroa said, and opportunities to replenish their spiritual banks are important to keeping the community strong.

Jansen’s keynote transitioned back and forth from speaking and singing, recounting strong women in the Bible who took on the challenges of life with faith in God.

Christ can overcome the challenges of the world, Jansen said, challenges that include hunger, COVID-19, the breakup of families or systemic injustice.

Detroit Medical Center staff offered attendees free blood pressure checks in addition to tips on how women can better take care of their physical and mental health during stressful situations. 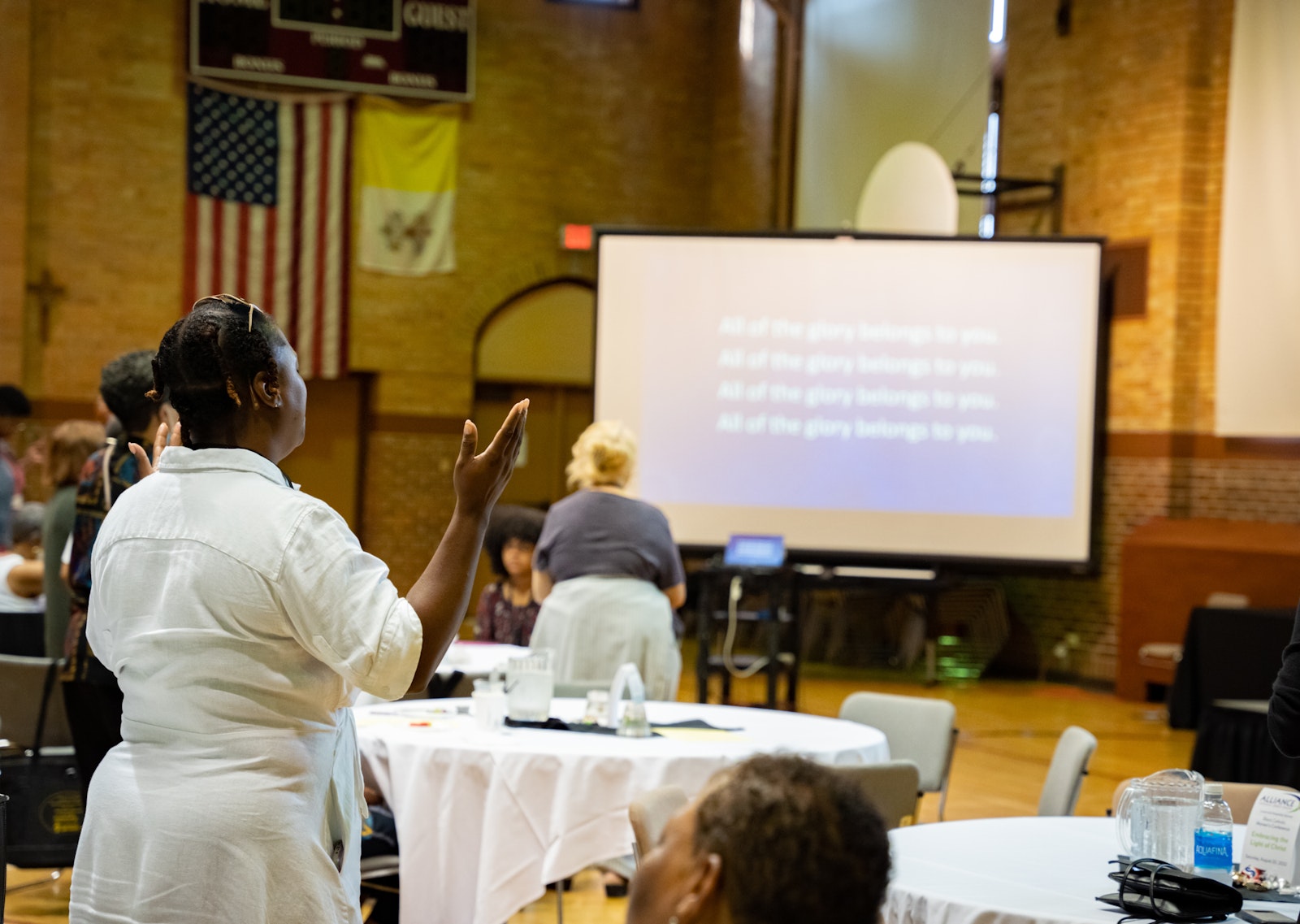 The pandemic was especially difficult on the African-American community, which bore a higher burden in service industry jobs and other industries in which social distancing and sick days were more limited.

“COVID did a lot of extra damage because (Black Catholics) tend to be the ones in the service roles; we tend to be the ones in multi-generational households, in smaller households and jobs were they couldn’t do remote work, didn’t have paid sick days and had limited opportunities to quarantine,” Figueroa said. “Then, when you think about incidents like the killing of George Floyd and Breonna Taylor, the social justice marches that took place two summers ago, it really took a toll on our social safety net.”

Auxiliary Bishop Donald F. Hanchon, moderator of the archdiocese's Central Region, celebrated Mass in Sacred Heart’s chapel, recalling the Black women who played an important role in formation when he was an intern deacon at St. Bernard Parish on Detroit’s east side.

“One of the things I learned from the Black church was the many, many women who were strong and valiant moms of large families,” Bishop Hanchon said in his homily. “They knew what leadership meant, but they had this humility, which was just as important. They left a space for the Master, for the one who would be Lord of our lives.” 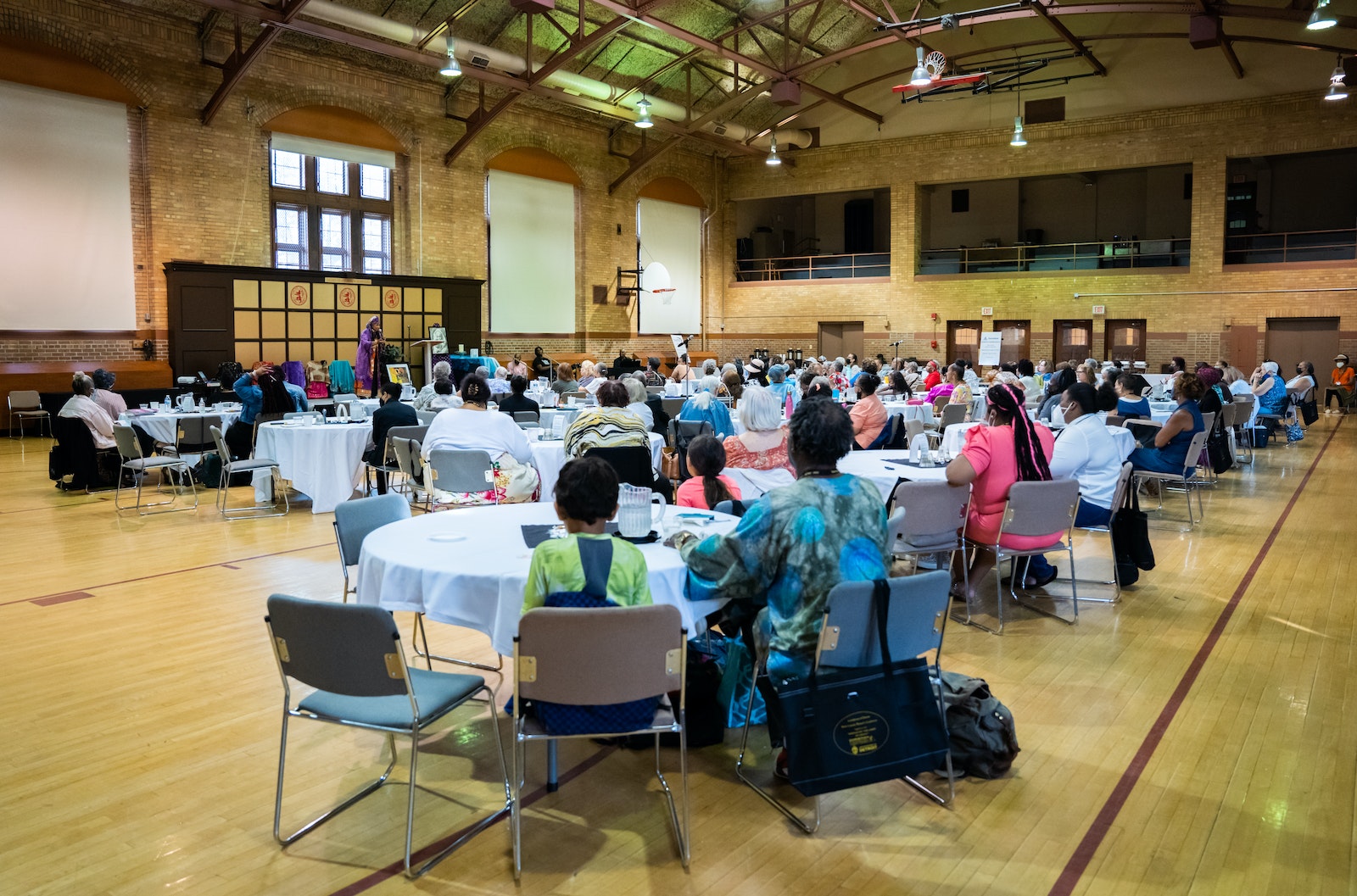 Auxiliary Bishop Donald F. Hanchon, who celebrated Mass during the conference, recalled advice he was given as a deacon that God will always provide, he said.

Bishop Hanchon recalled once when he was struggling to come up with a homily for Holy Thursday, admitting to the congregation that he “didn’t have the words.” A Black woman, who was a parishioner, came up to him during the Sign of Peace to admonish the then-deacon: “Don’t you ever say you don’t have the words; they are God’s words.”

“Don’t ever think you don’t have the words; God will give it to you, He always does,” Bishop Hanchon said. “I’m grateful God has placed His joy in our hearts, so His joy can be complete. Give thanks we are the brothers and sisters of God, all loving, all forgiving. Praise Him.”