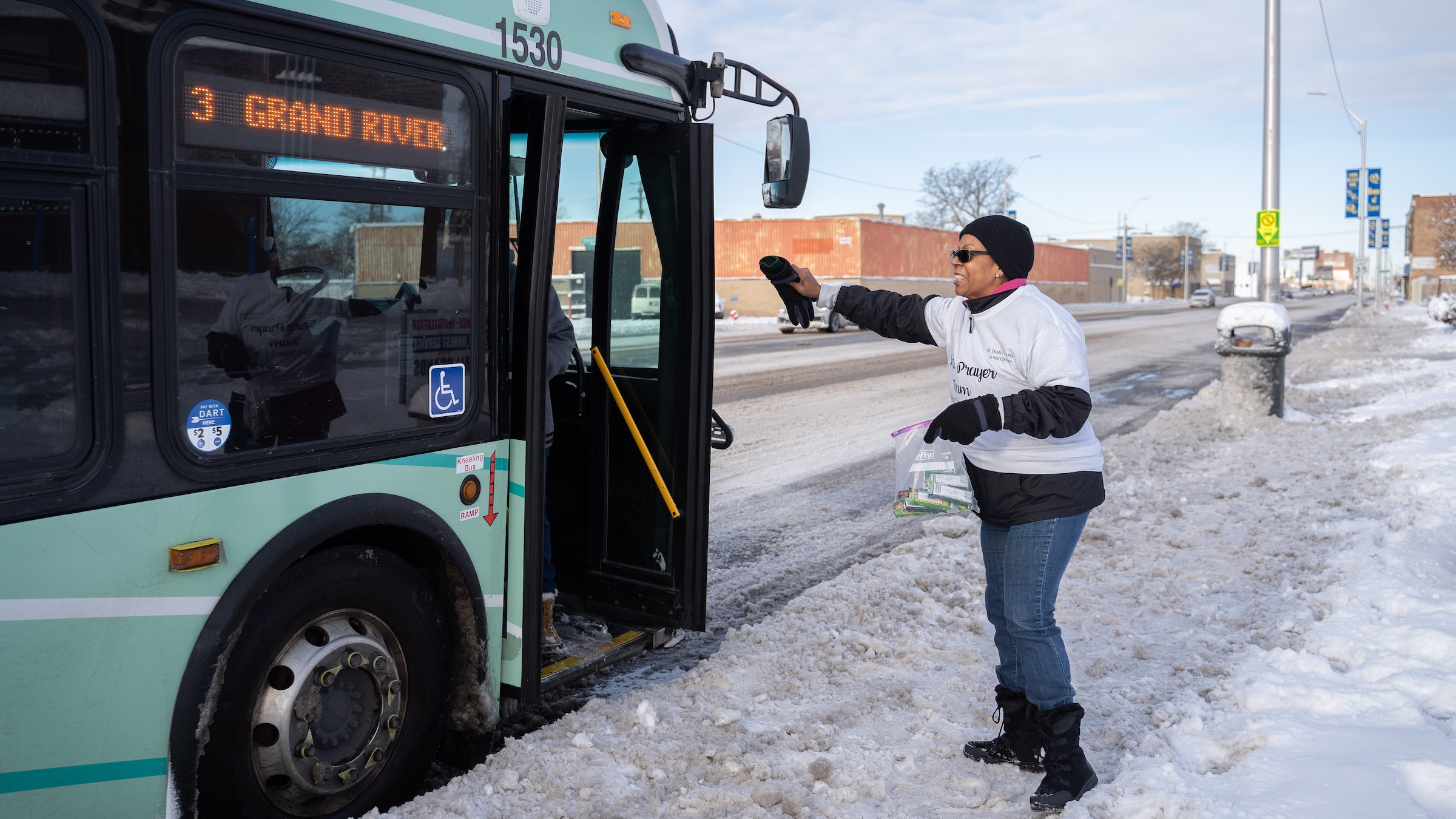 St. Charles Lwanga parishioner Pat Dixon greet a Detroit Department of Transportation bus driver and commuters at the corner of Grand River Avenue and Livernois on Detroit's west side. The St. Charles Lwanga bus stop ministry prays for people at nearby bus stops, offers breakfast bars and provides a presence for the parish in the neighborhood. (Photos by Valaurian Waller | Detroit Catholic)

St. Charles Lwanga parishioners take to the streets of northwest Detroit to share the Gospel with bystanders, commuters

DETROIT — Most Detroiters elect to stay indoors when the snow piles up. Classes are canceled. Chores are postponed. Commuters choose to work from home if they can.

But on a recent November day, Connie Gray stood resolute against the blistering wind, ready to greet people with the love of Christ no matter the weather.

Dressed in boots and a winter coat covered with a St. Charles Lwanga Parish t-shirt, Gray handed a breakfast bar to a man waiting for a bus on Grand River Avenue and asked whether it would be OK for her to pray for him.

“I woke up and asked where God wanted me today, and this is where He wanted me to be, so this is it,” Gray told Detroit Catholic as the DDOT No. 3 Grand River bus pulled away from its stop. “Life is about the choices you make, and I choose to stand out and wait for the bus, to be there to wait for the people who are out here, going to work.”

Gray is part of the newly established St. Charles Lwanga Parish bus stop ministry. A small group of parishioners stand at the bus stops at the nearby Grand River-Livernois intersection in northwest Detroit, offering to pray with those waiting and handing them a breakfast bar with a Bible verse printed on the wrapping.

“Yesterday it started snowing. And looking at the snow, I was thinking of the many homeless on the streets, those who would be out here today,” Gray said. “We’re out here for only an hour, and the Lord said, ‘Can you pray for me for an hour?’”

The ministry team begins its work after the 7:30 a.m. Mass and a blessing from Fr. Theodore Parker, the parish pastor. Then the group heads out to Grand River and Livernois, ready to greet those waiting for the next bus.

Grand River and Livernois form a crossroads for northwest Detroit, a connector for many bus riders heading downtown or further west of the city.

“The first time we went out, we had good reactions,” said Patricia Dixon, director of faith formation at St. Charles Lwanga. “People were pleased to see us. We had some grace-filled moments, people excited to be prayed over. Then we went back to the chapel, giving all the praise to God for the experiences we had. It was really powerful.”

Standing with the weary travelers and braving the bitter Detroit cold, the St. Charles Lwanga bus stop ministry wished Detroiters a blessed day and offered a prayer to warm their souls.

“Most of the people we’ve approached are very receptive, and we’re able to have a conversation with them and pray,” said Angela Thomas-Weldon, pastoral associate at St. Charles Lwanga. “They were responsive and shared their stories with us, and we shared our story with them.”

The street ministry even extended to the bus drivers, as the evangelists walked onto buses to wish a blessing to passengers and drivers braving the dangerous road conditions.

“One bus driver was in awe when we wished him a blessed day,” Thomas-Weldon said. “You could just tell the Holy Spirit got ahold of him, and he smiled and said, ‘Thank you.’ He asked if we wanted a donation, and we said, ‘No, we’re just here to pray for you.’ I could tell he took off just a little more slowly.”

St. Charles Lwanga has done street evangelization before. The parish hosts Take Back the Night prayer rallies in front of the church, praying for peace on Detroit’s streets. The bus stop ministry is an extension of the parish’s mission to spread the name of Jesus in the city, said Bennie Thomas, chair of the evangelization team.

“It’s definitely an inspiration to others, us being out here for an hour where we are needed,” Thomas said. “We’re getting people to talk about God. It’s easy to do. It’s comfortable, simply smiling, wishing them a good day. Our pastor says no one wants to see Christ preached with a glum face.”

St. Charles Lwanga is situated among three bus routes: No. 3 — Grand River, No. 30 — Livernois and No. 54 — Wyoming. Thomas said the parish territory extends roughly from Meyers Road and the Davison Freeway to Martin Luther King Jr. Boulevard and the Lodge Freeway, about 10 square miles with only one Catholic parish.

“It’s a small parish, but the Holy Spirit is here,” Thomas said. “We have 10 square miles we’re responsible for now, and we’re not close to filling out to where we need to go, to the outer limits of our boundaries. But the people aren’t coming to the church, so we need to go out to the people.”

The bus stop ministry plans to continue to go out into the streets to greet Detroiters on their morning commute, come rain, shine, sleet or snow.

“St. Charles Lwanga Parish has been on this corner offering Catholic presence for 100 years,” Thomas-Weldon said. “We persevere. We’ve been through some hard times, but we are here to stay because the Lord has put us here. And because he has put us here, we are here for these people, to be people of hope, giving this community a sign of hope.”