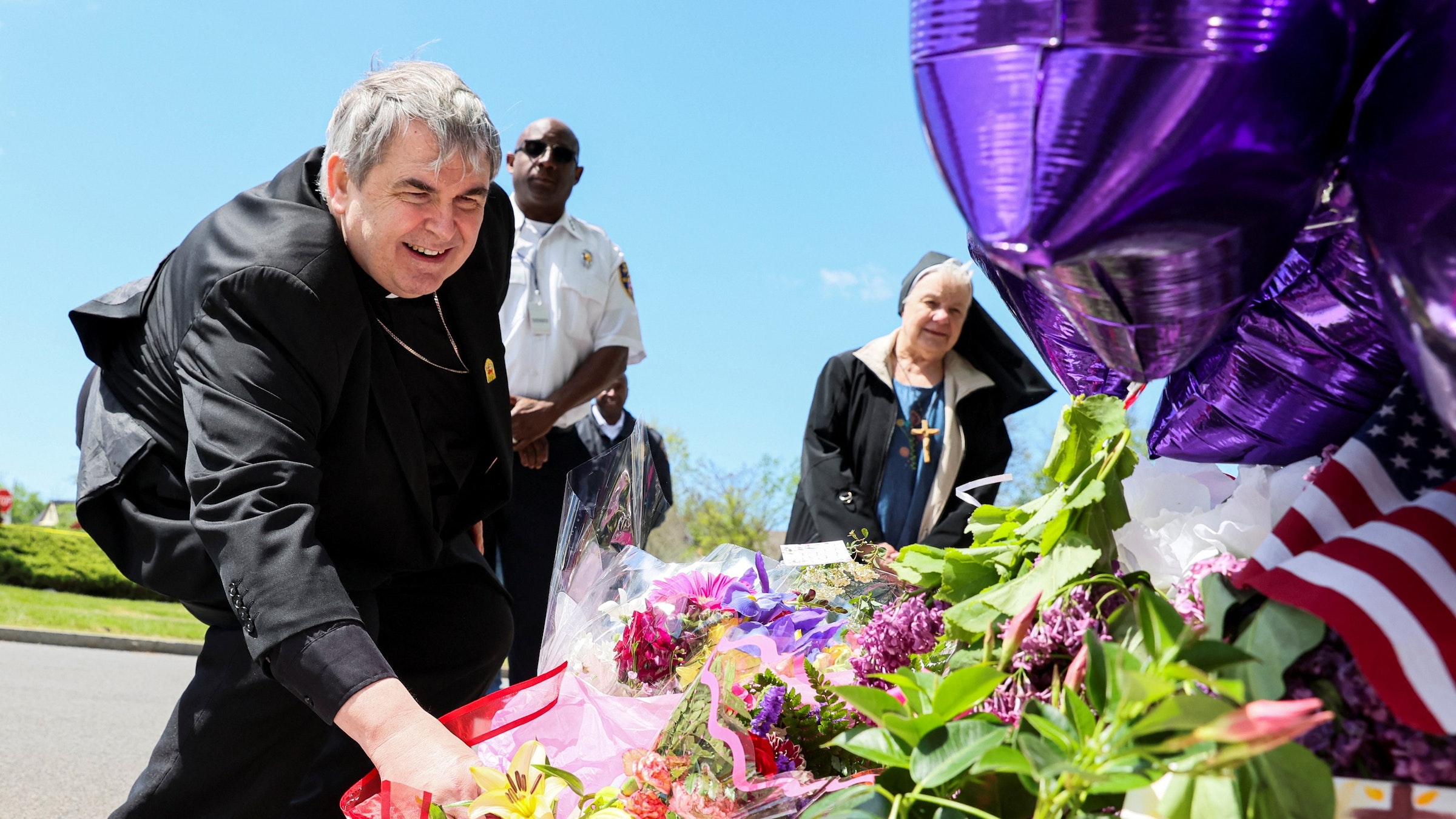 Bishop Michael W. Fisher of Buffalo, N.Y., places flowers at a memorial May 17, 2022, in the wake of a weekend mass shooting at a Tops supermarket. (CNS photo/Brendan McDermid, Reuters)

BUFFALO, N.Y. (CNS) ─ Bishop Michael W. Fisher of Buffalo joined mourners outside a Tops grocery store where 10 people were killed and three others were injured in what law enforcement authorities said was a racially motivated crime.

Placing flowers and a handwritten note remembering "the souls of our brothers and sisters lost to the acts of violence and racism" at a growing memorial outside the store, Bishop Fisher paid his respects to the victims May 17, the Western New York Catholic reported.

Cheryl Calire, director of pastoral ministries for the Buffalo Diocese, told the Buffalo diocesan news outlet that the bishop's visit was a way to offer a "prayerful, peaceful way of being present" with others who had gathered at the site.

Bishop Fisher talked with police and fire department officials who were coordinating the investigation at the crime scene as investigators combed the store and surrounding area for evidence that could be linked to the suspect in the mass killing, 18-year-old Payton S. Gendron of Conklin, New York.

All of those who died were Black as was one of the three who were injured.

Police said Gendron, who is white, allegedly was wearing tactical gear and armed with an assault weapon when he entered the supermarket around 2:30 p.m. May 14 and began shooting people he encountered. He has been charged with first-degree murder and remained in custody without bail.

Gendron has entered a plea of "not guilty." He is scheduled for another court appearance May 19.

Authorities said they discovered a chilling 180-page manifesto that was posted online in which Gendron allegedly stated he wanted to "kill as many Blacks as possible" and claimed some groups are trying to replace white people in the U.S. with people of color.

Accompanied by Calire, Bishop Fisher visited the scene after President Joe Biden and first lady Jill Biden left the area. The Bidens also laid a bouquet of flowers at the makeshift memorial and grieved with family members of the victims.

In a speech during his visit, the president vowed that "white supremacy will not have the last word."

Also at the memorial site were Father Paul Seil, pastor of Our Lady of Perpetual Help Parish in Buffalo and a chaplain for the Buffalo Fire Department, and Felician Sister M. Johnice Rzadkiewicz, executive director of the Response to Love Center on the city's east side.

Bishop Fisher also briefly met with other religious leaders who were at the scene.

"It was a good pastoral visit," Calire said. "People were coming up to him and asking him to pray for them. It was so nice to see a shepherd in his element. That's what he has been called to do. And he was on the street with the people bringing comfort just by his presence."

Shortly after the shooting, Bishop Fisher condemned on Twitter "the scourge of senseless gun violence that has taken the lives of so many across our nation and changed the lives of countless innocent men, women and children must come to an end."

On May 17, he later updated his remarks saying that innocent people were victimized in the killing spree. "No love was shown in this rampage, only the deepest of hate," he said.

"This country has struggled for years with the practice of racism and white supremacy that has victimized communities of color and has weakened us all. My hear is so heavy, and I pray for the victims, their families, friends and this community traumatized by this tragedy," he said in a statement.

"Faith," he continued, "compels us to reject the abject evil of racism and white supremacy, and to say 'no' to terror, and 'no' to the intent to silence Black and Brown voices."

The bishop will host an interfaith prayer service May 23 at St. Martin de Porres Church, located near the grocery store.

Religious communities and individuals participated in an online prayer service May 17 organized by #Onebody, a diverse ministry that addresses racial and social justice.

Contributing to this story was Patrick J. Buechi, a staff reporter at the Western New York Catholic, the news outlet of the Diocese of Buffalo.