‘Bursting at the seams,’ Shrine to move sixth graders to academy in fall 2021 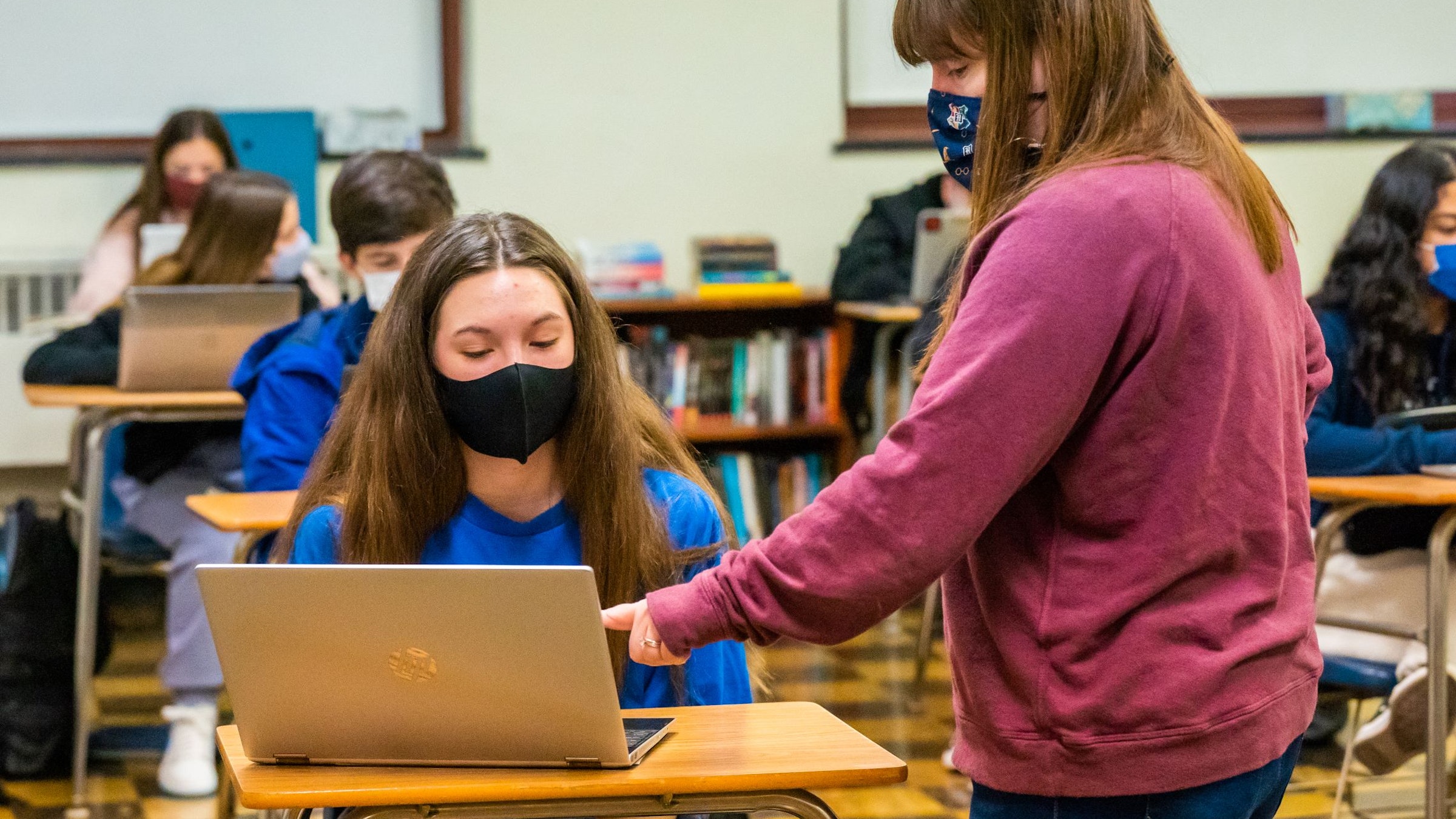 A teacher helps a student with her coursework at Shrine High School and Academy in Royal Oak in February. The basilica’s pre-kindergarten through 12th grade educational campus announced it would be moving its sixth graders to its academy starting next year, a result of enrollment increases and a need for more space. (Photos by Valaurian Waller | Detroit Catholic)

ROYAL OAK — Shrine Grade School’s sixth graders are moving up in the world. To the academy level, to be exact.

The Royal Oak Catholic school announced earlier this year it was restructuring its grade school and nearby high school and academy as a result of enrollment increases in its pre-kindergarten program, which has caused the grade school to become “bursting at the seams,” said James Mio, principal of Shrine High School and Academy, which will accept the school’s sixth graders starting in the fall of 2021.

The decision to open an early childhood center at Shrine in 2017 was a response to parents’ requests for more child-care and early-learning options, which in turn led to a natural feeder system for schools at the National Shrine of the Little Flower Basilica, Mio said.

But few could have expected the program’s rapid success would so quickly lead to the need for expansion.

“As those years progressed, those numbers continued to build, and now the grade school literally has no open space for their students,” Mio told Detroit Catholic. “As any middle school program can tell you, the bigger the program, the more you’re going to get the transitions from the lower levels to the higher levels.”

Jennifer Bero, principal for Shrine Grade School, said while the goal is to keep kids enrolled from pre-kindergarten through 12th grade, moving sixth graders to the high school makes academic sense, too.

“Looking forward, we knew the ultimate goal was to move kids over to the high school, and we knew we had to move our sixth graders to make room in our (grade school),” Bero said. “But we also wanted to give our sixth graders a true middle school model of sixth, seventh and eighth grade.”

Currently, Shrine schools are separated into two campuses. The grade school and early childhood center are across 12 Mile Road from the basilica, while the high school and academy are a mile north on 13 Mile Road.

The grade school currently has 550 students enrolled — of which 65 are currently sixth graders — while the high school and academy have approximately 400 students combined.

This year’s fifth-grade class — those who will be transitioning to Shrine Academy next year — number about 73 kids, Bero said.

“I think there’s a sense of excitement (among parents and kids),” Bero said. “The kids, in particular, are excited about it. There’s a few who are maybe apprehensive, but for the most part the things I’ve heard are positive.”

The change had been discussed for some time, but the catalyst came when Fr. Joe Horn, Shrine’s new pastor and rector, decided soon after the pandemic hit that it was time to make it happen, Mio said.

The school community stepped out in faith — especially considering no one knew what the 2020-21 school year would look like — and began making plans for the future.

“Our academy has always been our little jewel in the Shrine community. It started with a rough beginning, but we knew in the back of our minds it was a great decision,” Mio said. “It’s something that will build our academy to be what we want it to be, help our students persevere from the fifth grade to junior high, and then help our eighth graders transition into our ninth grade high school building.”

On March 8, Shrine announced the hiring of Joanne Swan Jones as the community’s first-ever head of schools, another move toward unifying Shrine’s pre-K-12 campus.

“Shrine Catholic Schools is an amazing educational institution with the highest levels of academics, athletics, fine arts and faith formation,” said Jones, who previously was executive director of academics at Notre Dame Preparatory School in Towson, Md. “I am excited and honored to join the Shrine team and meet the more than 1,000 students and their families who make up this amazing and thriving community. I am looking forward to leading this community into its next strong chapter.”

Besides the spatial concerns, moving sixth graders to the academy allows them to take advantage of elective courses such as music, band, art or foreign language sooner, Mio said.

“When you use the word ‘elective,’ you think college,” Mio said. “We’re going to give you a little bit of every elective we offer, and then when you become an eighth grader, before you reach high school you’ll be able to select courses you want to take.”

In order to accommodate the change, the high school and academy restructured its cafeteria and counseling center, and plans to renovate additional classroom space to house the sixth graders.

Part of the success is due to Shrine’s hybrid in-person/remote model, which accommodates parents who want to send their kid to school in either format.

“Even before we realized how long this was going to last, we had waiting lists in all of our preschool classes,” Bero said. “I think people are interested in Catholic education. They’re looking for something different.”