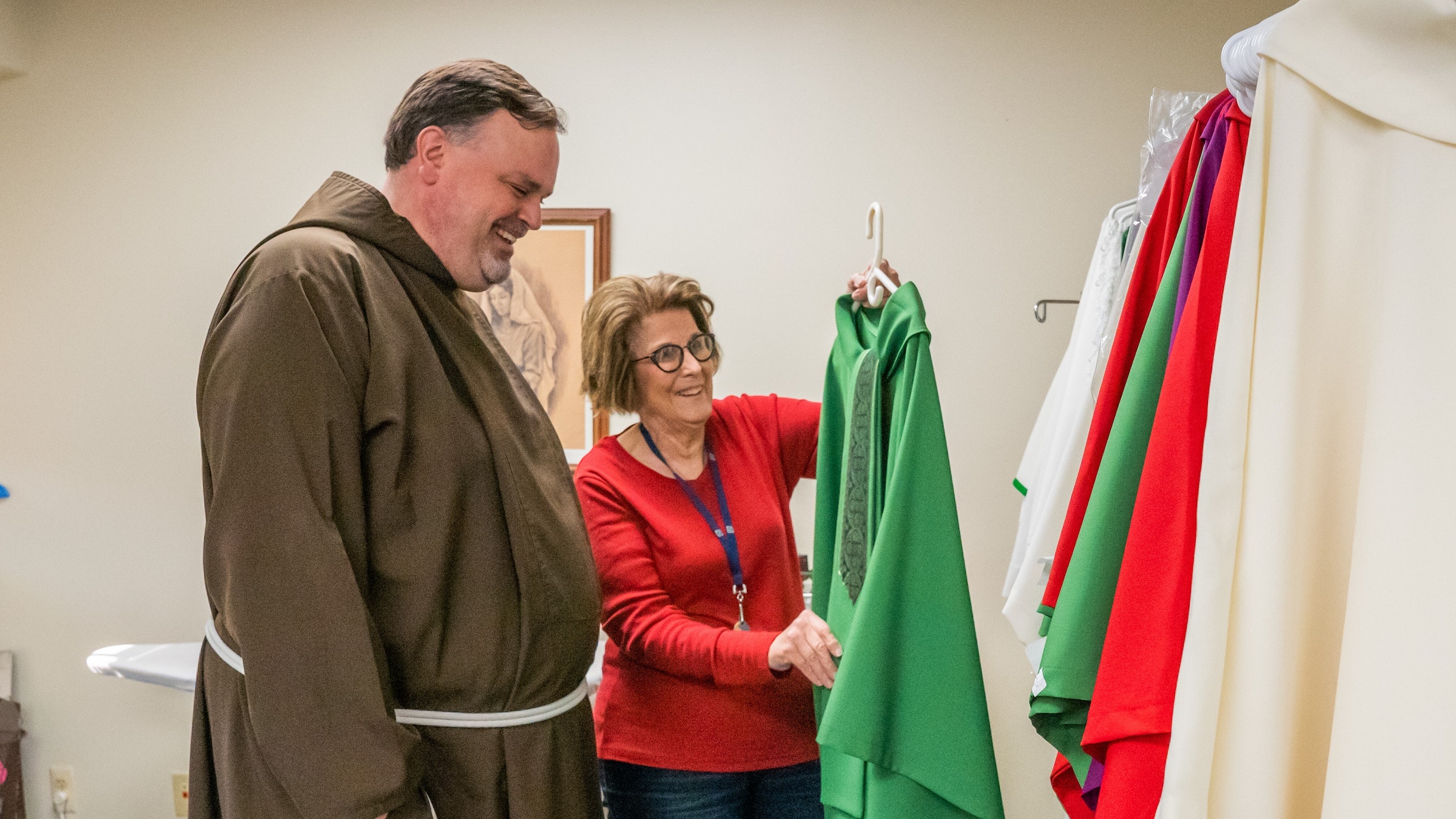 Nancy Long, leader of the Capuchins' Eucharistic Mission Band, shows some of the vestments the group made to Bro. Steve Kropp, OFM Cap., director of the Solanus Casey Center. The group started in 1917 making vestments for priests, and today mainly focuses on making chasubles and stoles that they send to Capuchin missions in South America and Africa. (Photos by Valaurian Waller | Detroit Catholic)

DETROIT — The St. Bonaventure Eucharistic Mission Band isn't a band in the way that Fleetwood Mac or Led Zepplin are bands.

Loretta Chmielarczyk had that confusion cleared up for her 35 years ago when she was asked as a newly professed third-order Franciscan to become a board member for the band.

“I was a little overwhelmed and I said, ‘Well, Father, just let me get my feet wet first and find out what I'm doing,’ because I never thought I was material to be a third-order member," Chmielarczyk told Detroit Catholic. “‘Besides,’ I said, ‘I don't play a musical instrument.’ And he said, ‘No, it's not that kind of a band; it is a sewing band of ladies.’”

Within six months, Chmielarczyk was on the board, and before long, she put to use the copious amount of sewing she had done for her eight children, becoming a member of the group of ladies sewing vestments for Capuchin missionaries across the world. 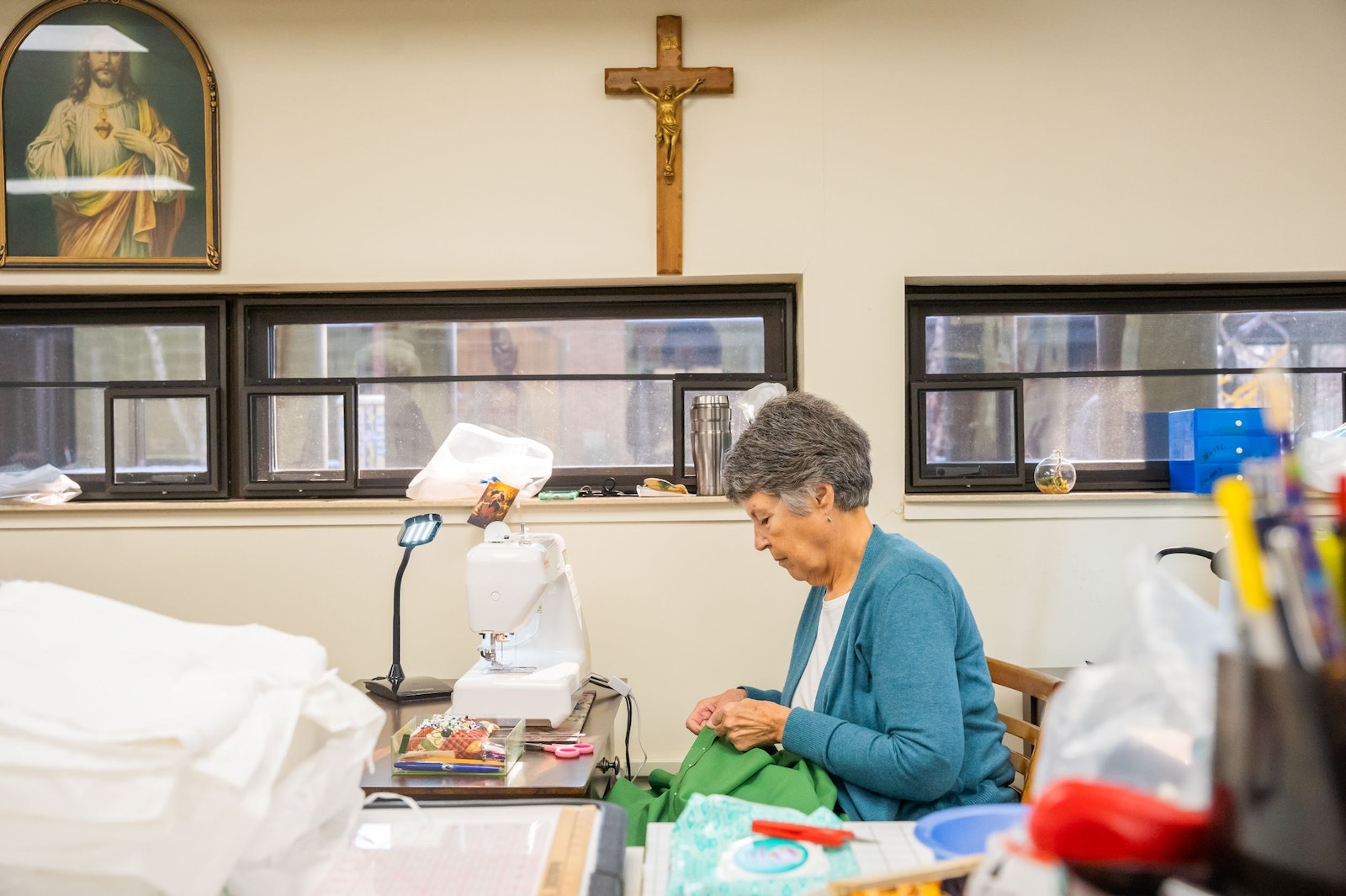 Madeline Balice sews a chausible in the sewing room at St. Bonaventure Monastery. The century-old Eucharistic Mission Band, which started in Detroit in 1917, has seen membership ebb and flow over the years. Currently, six women meet weekly to sew vestments, but occasionally complete special order projects for the Capuchins.

The group, which meets weekly at the Solanus Casey Center in Detroit, started in 1917 making vestments for priests, and soon was asked to make Communion dresses for inner-city children. The group briefly disbanded for two years, but was reinstated and have been going strong ever since, adding funeral vestments, tablecloths and liturgical items such as purificators and corporals to their cache.

Often, priests and deacons in mission areas don't have the same access to vestments that priests in America do, and that's where the Eucharistic Mission Band comes into play.

The group is small, currently with six members — about half of its membership a decade ago — and with limited resources the band mainly focuses on making chasubles and stoles they send to Capuchin missions in South America and Africa.

The group is aware of its history, and occasionally a Capuchin priest celebrates Mass for the members of the Eucharistic Mission Band, including intentions for current and former benefactors. 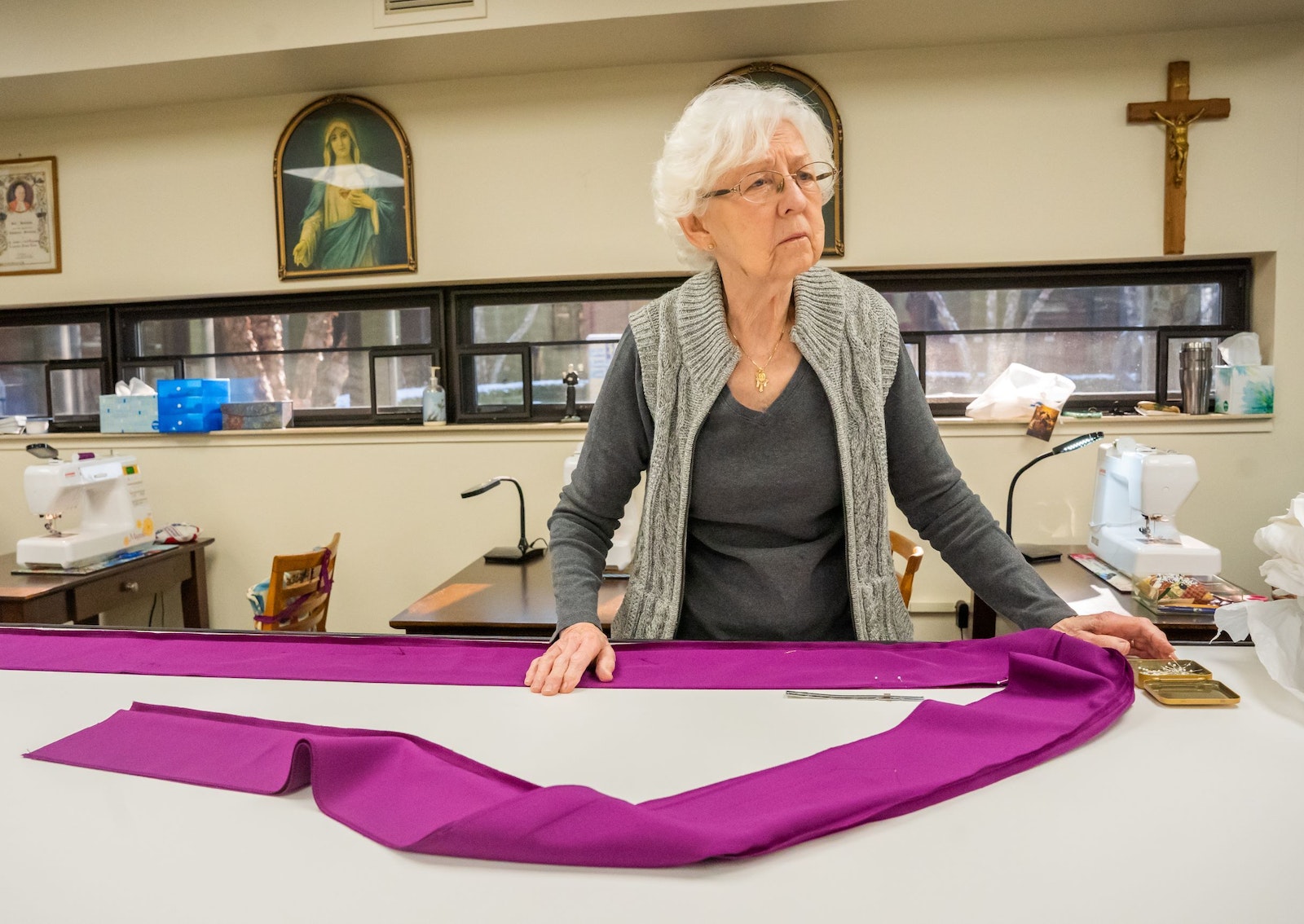 Sewer Dorothy Merlo prepares a vestment in the Eucharistic Mission Band's meeting room at St. Bonaventure Monastery on Detroit's lower-east side. For a $150 donation, the group can complete a chasuble and a stole for priests in the Capuchin mission fields overseas.

Nancy Long, the current de facto leader of the Eucharistic Mission Band, has been a member since 2011, when she retired from teaching at St. Thecla School in Clinton Township. Occasionally, she said, the group will still make an altar cloth or other items upon special request from the Capuchins, but have scaled back on special orders so they can focus on completing their main work.

For a $150 donation, the group can complete a chasuble and a stole, Long said.

“When they're done, we send them out, and many of them now go over to Africa,” Long said. “We have to find someone to take them when they go (abroad) because if we mail them they will never get there. Some of them go to India and Pakistan.”

Long said the band currently is preparing to send 32 orders to Nigeria. 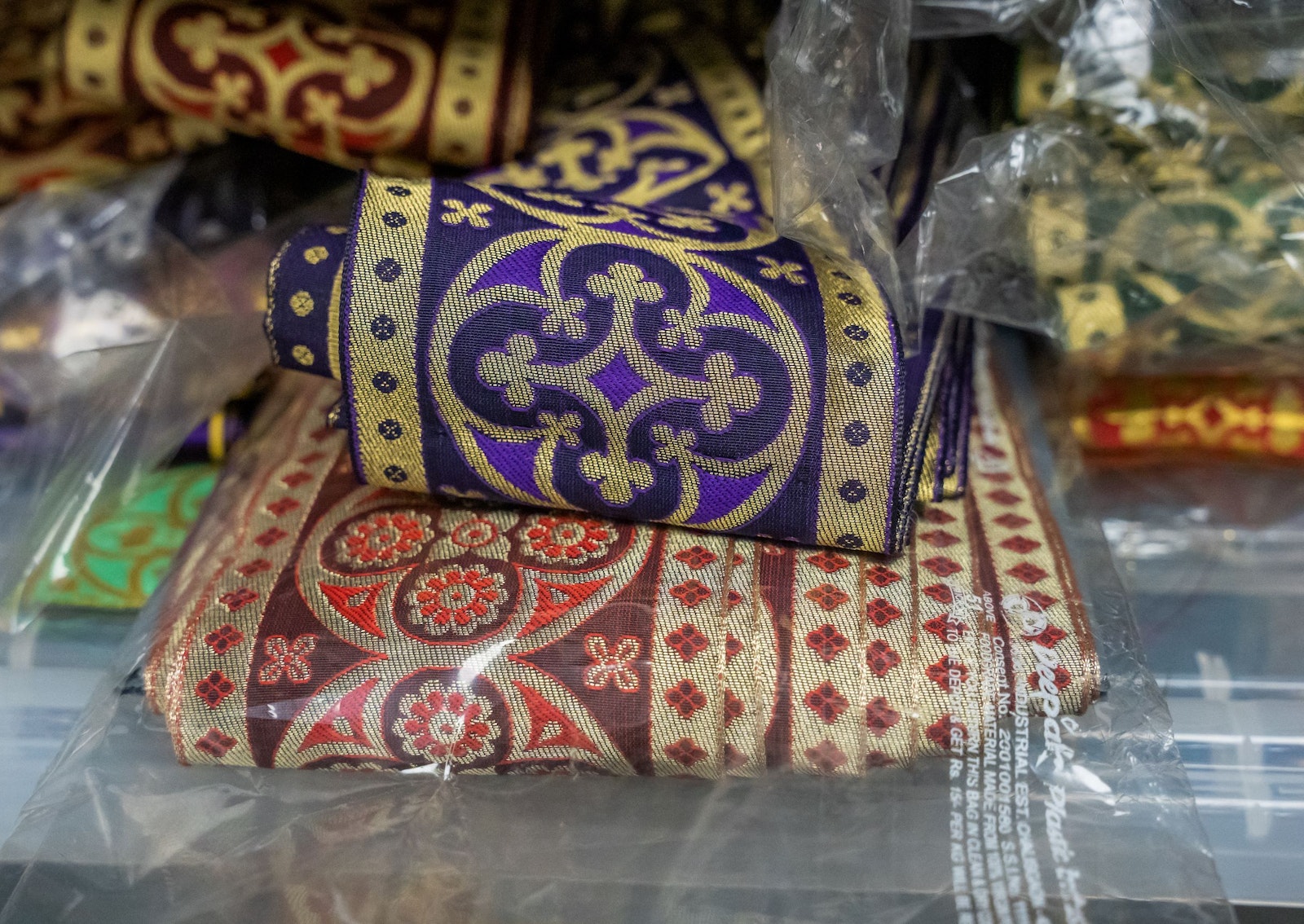 Some of the stoles completed by the women are seen on display in the Capuchins' offices in Detroit. Currently, the group is working on orders for 32 vestments to be sent to the missions in Nigeria.

Members typically visit the sewing room at St. Bonaventure on Detroit's lower-east side once a week, Long said. With minimal interruption, it usually takes about 12 hours for the sewers to complete a chasuble and stole; if a member hasn’t finished an item by the end of the day, it gets left out for the next member who happens to visit to finish.

And while they sew, they socialize.

“We are talking and we are laughing, and we have fun,” Chmielarczyk said. “It's a nice group of ladies.”

Chmielarczyk, now in her 80s, laughingly says when she joined the group all those years ago, she never intended to keep sewing into her 90s, though she has cut down her sewing time over the years.

“I'm getting there,” she laughed.

Long and Chmielarczyk said the Eucharistic Mission Band is always looking for new people to join in order keep up the century-old tradition of lovingly sewing for the Church's mission fields.

“We always stress, 'Do the best you can because it goes on God's altar,'” Chmielarczyk said.