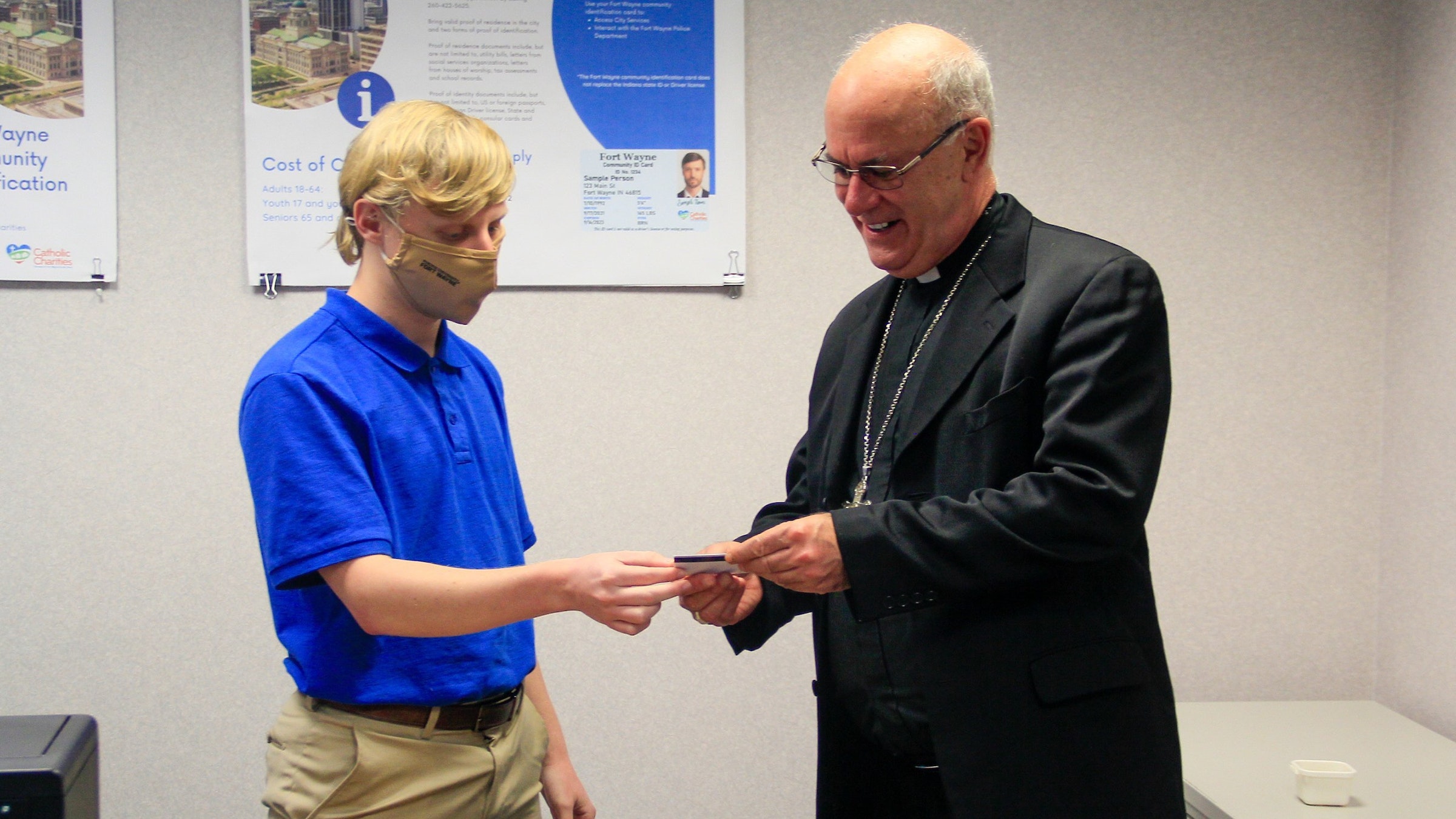 Bishop Kevin C. Rhoades of Fort Wayne-South Bend, Ind., receives a Fort Wayne ID card Nov. 10, 2021, which was developed by Catholic Charities. The agency's officials said they hope the card will provide immigrants, the homeless and other in need a way to access city services. (CNS photo/Jodi Marlin, Today's Catholic)

FORT WAYNE, Ind. (CNS) ─ The staff at Catholic Charities of Northeast Indiana said they hope a new Fort Wayne identification card will become a point of pride and a source of local discounts, as well as enable residents to access critical community services.

Seeing the dentist about a toothache, getting the water turned on in a new apartment, opening a bank account, checking out a library book for a child -- these and other everyday activities, necessary functions of daily life, become insurmountable obstacles for the person who doesn't have a basic form of identification.

Homeless individuals, immigrants and others frequently have trouble complying with the requirements to obtain a state driver's license, complicating their ability to obtain housing, medical care and education and to access the city services most residents take for granted.

For several years the city and the Hispanic community have discussed the difficulty of these groups to obtain a photo ID. The issue arose again during an informal meeting of area Hispanic leaders, Catholic Charities immigration supervisor Luz Ostrognai and Fort Wayne Mayor Tom Henry in 2020. 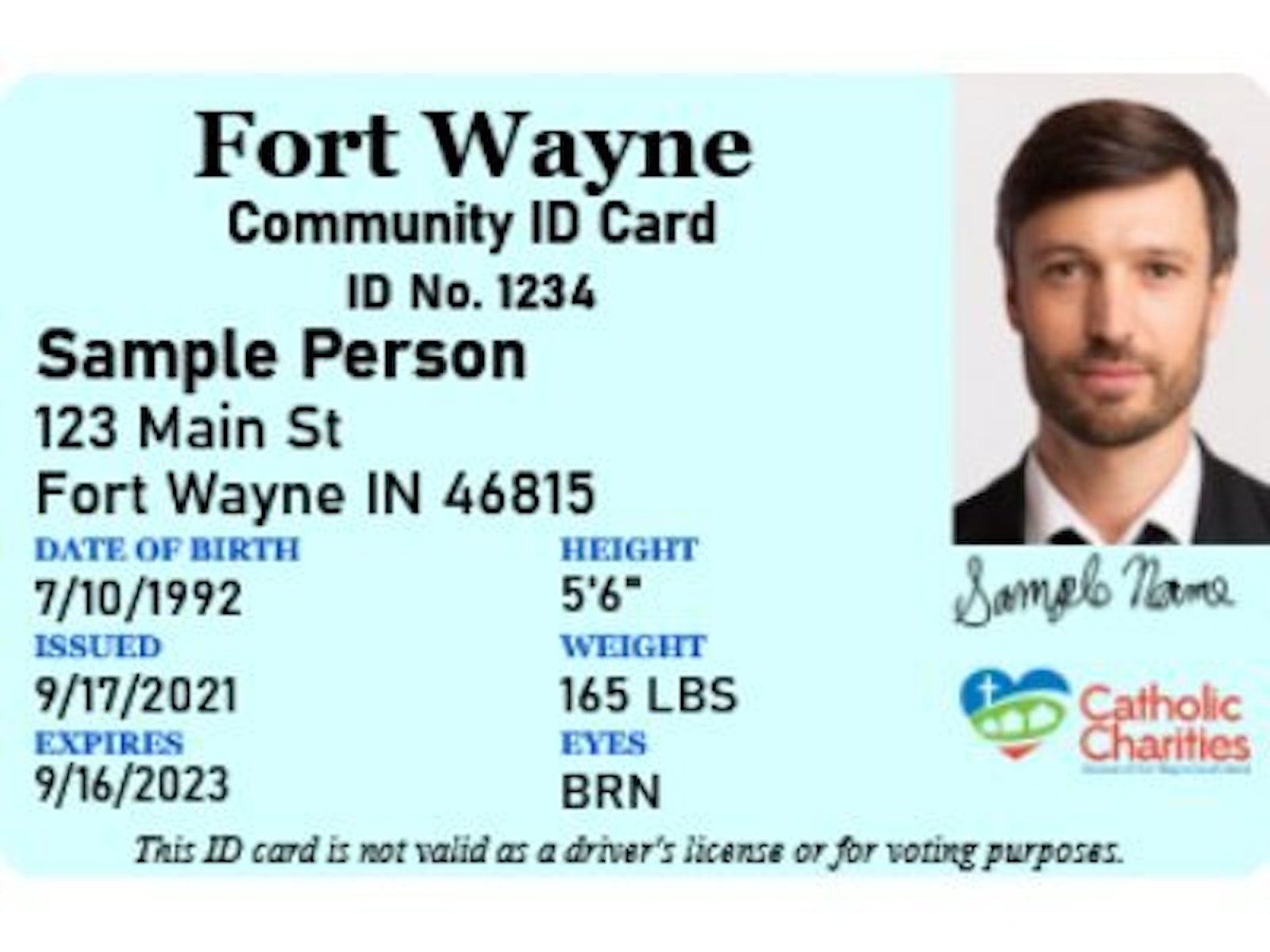 This is an example of a new ID card developed by Catholic Charities in the Diocese of Fort Wayne-South Bend, Ind. Agency officials said they hope the card will provide immigrants, the homeless and others in need a way to access city services. (CNS photo/Nicole Kurut, Catholic Charities courtesy Today's Catholic)

At that time, Henry expressed a desire to work with Catholic Charities, a trusted local agency, to distribute the cards and offered the financial support needed to purchase equipment to develop the card and give potentially thousands of city residents their first form of a photo ID.

"Really, it's a safety issue for the community, because now everyone who wants some form of identification can have one," said Nicole Kurut, mission advancement manager at Catholic Charities, a charitable arm of the Diocese of Fort Wayne-South Bend.

Another difficulty with some residents' lack of ID is that it makes them hesitant to report a crime -- even when they're the victim, she noted.

At a Nov. 10 celebratory event for the program, Henry emphasized the city's conscious efforts to become a home for refugees and immigrants.

"For years, Fort Wayne has tried desperately to make our city as inclusive as possible," the mayor said. "Many of you know that we have the largest Burmese population in the entire country: And that was by design. We wanted the Burmese to come to Fort Wayne."

The city has long worked with the U.S. Conference of Catholic Bishops to make sure it would be recognized as a welcoming community.

"We've done it with Bosnians, with the Hispanic community, we've tried to ensure anyone who wanted to call Fort Wayne home was welcome to do just that," he noted. The common challenge has been that these and other demographic groups in the city could not meet the requirements for a state ID card or driver's license.

"Yet, they're expected to provide something to vendors, something to the government and to others, to prove they are who they say they are," Henry said.

Conversations with other nearby cities in Indiana that offer a local photo ID card -- including South Bend, Elkhart, Goshen and Plymouth -- have resulted in the Fort Wayne Community Identification Card program, which began in mid-October. Notably, the card does not allow the holder to drive, vote, board a plane, or access public benefits such as food stamps or Medicaid, but is accepted by several Fort Wayne health providers, banks, credit unions schools, city offices and the Allen County Public Library.

"Now we can tell the citizens of Fort Wayne, 'Yes, not only do you belong here, but we're going to give you a form of ID that says we appreciate you.' What a powerful statement for a community to make," Henry said.

Beyond addressing a need experienced by a certain demographic, the hope is that local businesses will embrace the card with special offers. "It's for anyone who wants to show their Fort Wayne pride and maybe get a discount or something for it," said Kurut.

Bishop Kevin C. Rhoades of Fort Wayne-South Bend obtained his card Nov. 10. He said at the gathering that the Fort Wayne Community Identification card was all about human dignity because it will provide access to services needed by individuals who are created in the image and likeness of God.

Ostrognai reported that more than 1,500 requests for appointments to obtain the ID card have been received by Catholic Charities since the initiative was announced Oct. 14. More than 400 residents have already been issued a card.

Marlin is editor of Today's Catholic, newspaper of the Diocese of Fort Wayne-South Bend.