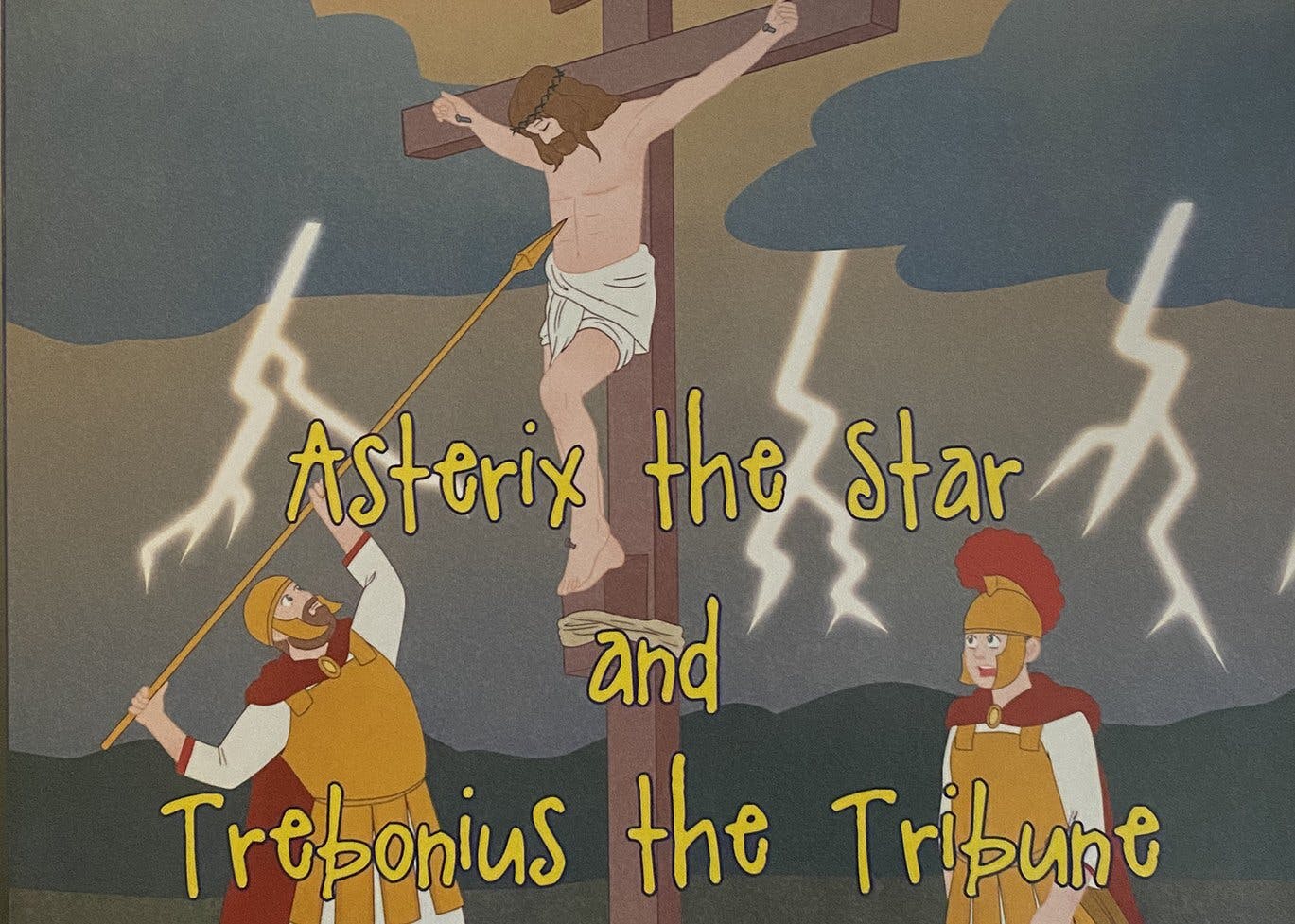 This is the book cover of "Asterix the Star and Trebonius the Tribune," by Christine Anghie. (CNS photo/courtesy The Catholic Spirit)

WHEELING, W.Va. (CNS) -- Pointing to the words of St. Jerome, "Ignorance of Scripture is ignorance of Christ," writer Christine Anghie said the purpose of her books is "to teach the younger ones."

In her tales of fictional characters interacting with real biblical characters and events, she hopes to help children develop a connection with the Gospel.

Her latest book is titled "Asterix the Star and Trebonius the Tribune."

Anghie describes the first story in it, "Asterix the Star," as the tale of an underdog. God asks for a star to lead the three Wise Men to the Christ Child, but regular stars cannot leave their appointed places. So, a little boy star named Asterix confidently steps up to take on the task.

To prepare, he goes to star school to learn how to shine. When he begins his job, however, the little star becomes distracted and is convinced by his friends to take a break for a while. When he returns to his post, the Wise Men cannot be found. What follows is a sweet story from which children will be able to gain many lessons, especially in faith.

Although written for children, Anghie notes in the book that the story also is an allegory for adults. "We sometimes lose our way because other things are so important," she told The Catholic Spirit, newspaper of the Diocese of Wheeling-Charleston. "We need to find our way back just like the little one did."

The second story, "Trebonius the Tribune," begins at Jesus' crucifixion and takes children on a journey with Trebonius to the crucifixion of St. Peter. It is here that Trebonius' conversion takes place.

"He sees St. Peter ... as if he's going to the greatest thing ever and he cannot recognize this man going to his death, but he seems so happy like the other Christians," Anghie said of Trebonius.

"Asterix the Star and Trebonius the Tribune" was published by Christian Faith Publishing in September 2021. Anghie' latest book follows her previous works, "Dismas -- The Thief of Paradise," which was published in the U.K., and "Ben -- the Hapless Donkey and Amal -- The Fisher of Men," published in 2003.

Her books have been recommended by the bishops of the Diocese of Wheeling-Charleston to be incorporated in the religious programs of all 24 diocesan schools, both elementary and high schools.

All of the profits from Anghie's books go to the Adopt A Student program at St. Vincent de Paul Parish School in Wheeling, where she has been a beloved teacher for 43 years. She has served as assistant principal and teacher for seventh- and eighth-grade religion and language arts.

In February, she announced that she is retiring at the end of this school year.

St. Vincent de Paul Parish School is currently looking for a sponsor to fund the purchase of 100 books at a discounted price. The books will be used in different grade levels.

For St. Vincent's students, Anghie announced that the school's social media specialist Jay Yelenic will be helping her with an audio version of "Asterix the Star" with music and characters voiced by eighth graders and high school students.

Consumers can purchase "Asterix the Star and Trebonius the Tribune" at bookstores or online at Amazon.com, Apple iTunes store or Barnes and Noble.