Daniel Meloy From the Archives

SOUTHFIELD — Detroit’s archdiocesan cemeteries are inviting families to bring the remains of their deceased loved ones home.

Catholic Funeral and Cemetery Services, a ministry of the Archdiocese of Detroit, will sponsor three Masses on All Souls Day, Nov. 2, to encourage friends and families to bring cremated remains to archdiocesan cemeteries for proper burial, at no cost. 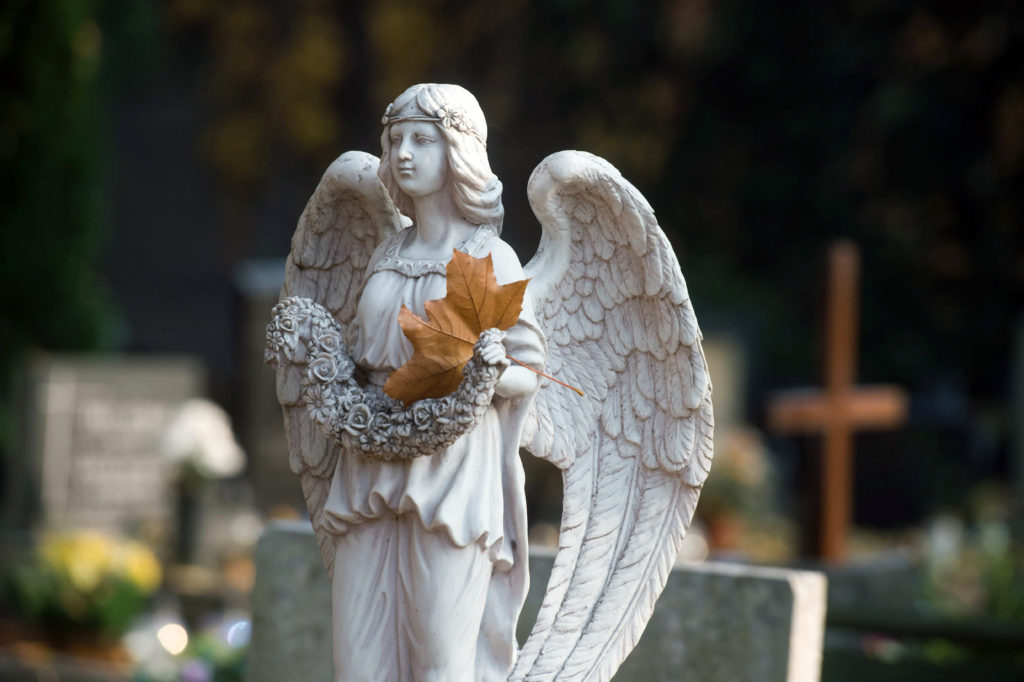 An angel statue with autumn leaves is seen at a Catholic cemetery. This year for All Souls Day, the Archdiocese of Detroit's Catholic Funeral and Cemetery Services is encouraging families to bring cremated remains of loved ones to be buried in one of the archdiocese's Catholic cemeteries free of charge as part of a campaign called Gather Them Home. (CNS photo/Grzegorz Michalowski, EPA)

The Masses are part of the archdiocese's “Gather Them Home” campaign, which highlights the cemeteries’ All Souls Remembrance Program, which facilitates the burial of cremated remains for families that either can't afford it or remains of those left unclaimed.

“The idea for the ‘Gather Them Home’ campaign was born about a year ago. Every month, our six Archdiocese of Detroit cemeteries receive about 100 unclaimed cremated remains,” said Deanna Cortese, outreach director for Catholic Funeral and Cemetery Services. “These are ashes that have been left at funeral homes, in people’s homes, in cars, or left unclaimed at morgues. What we do is have a Mass and a final committal service afterward, and we inter them in our All Souls Remembrance crypt.”

Holy Sepulchre Cemetery in Southfield and Our Lady of Hope Cemetery in Brownstown Township have hosted All Souls Remembrance Masses on the third Friday of every month for some time now, but the “Gather Them Home” initiative is meant to draw greater awareness to the cemeteries’ ministry of accepting the ashes of the deceased, free of charge, for proper burial.

“Because the monthly Masses haven’t been as well known, we decided to have a kickoff for ‘Gather Them Home’ on All Souls Day, with fliers sent out to parishes and emails to people across the archdiocese on what the All Souls Remembrance Program is and why we’re doing it,” Cortese said.

On Nov. 2, All Souls Day, Detroit Archbishop Allen H. Vigneron will celebrate Mass at 9 a.m. at Holy Sepulchre, and Masses will be celebrated at Our Lady of Hope in Brownstown Township at 11 a.m. and at St. Joseph Cemetery in Monroe at 2 p.m., with a committal ceremony following each Mass. Bishop Gerard Battersby will celebrate Mass at Our Lady of Hope, while the St. Joseph Mass will be celebrated by area pastors.

"Jesus Christ came in the flesh, and so it's in the flesh that we show love for one another," Archbishop Vigneron said in a video interview to promote the Gather Them Home initiative. "This is part of our belief as Christians."

"The remains of someone who is baptized, these are sacred," the archbishop continued. "We are baptized and made temples of the Holy Spirit, and these sacred remains belong in a sacred place, and that's what we're trying to help people achieve. Every cemetery, when we pass by one, is a reminder both to pray for the dead and a reminder that Christ will come again. Eternal life is not something we're going to live as a ghost, or some disembodied spirit. We're individuals, and we will see God face to face." 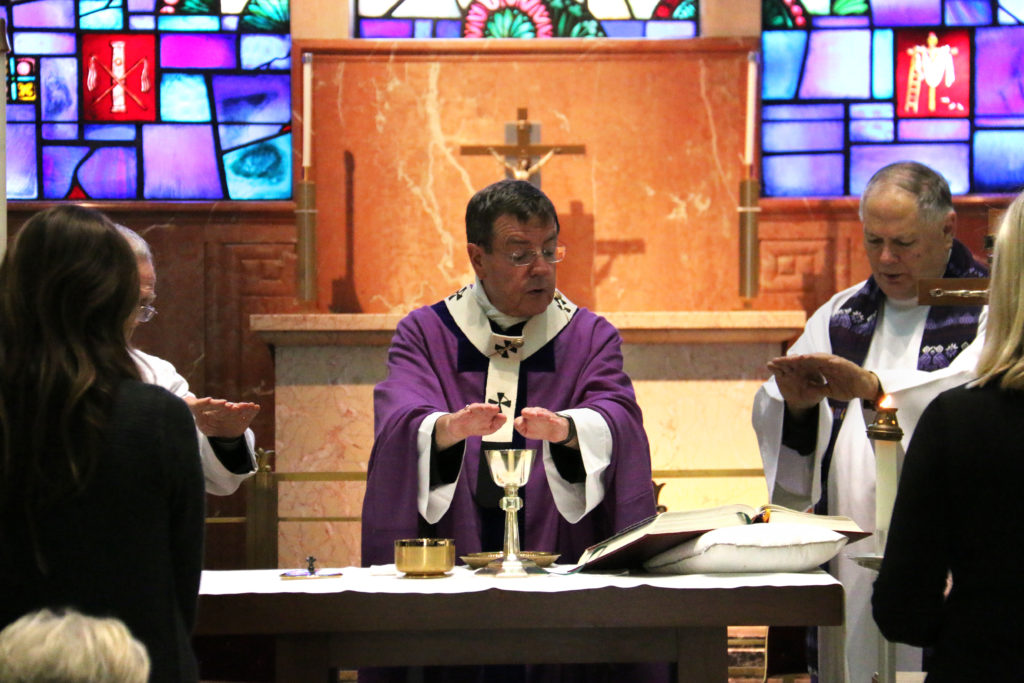 Archbishop Allen H. Vigneron celebrates Mass in the chapel at Holy Sepulchre Cemetery in Southfield during All Souls Day in 2016. (Archdiocese of Detroit file photo)

Archbishop Vigneron released a new pastoral note Oct. 8 highlighting the initiative, as well as the Catholic understanding of burial as a corporal work of mercy.

“Everyone deserves to have a proper Catholic burial,” said Bob Hojnacki, director of cemeteries. “Burying the dead is a corporal work of mercy. Right now, nationwide and in the state of Michigan, cremation is up to 50 percent (of all deceased), and that number is going to increase. However, right now, cremated remains account for about 30 percent of our burials, so the question is, where is that remaining 20 percent?”

Many Catholics keep the cremated remains of loved ones in vases or vials in the home, or scatter the ashes of loved ones, something the Catholic faith discourages, Hojnacki said.

Hojnacki said there are plenty of misconceptions about the Catholic Church’s teaching on cremation and what is considered acceptable.

Because of the Catholic belief in the resurrection of the body, the Church teaches that cremated remains should remain together -- not scattered or divided -- and be interred in a sacred place, which is why Catholic cemeteries can provide a consecrated and dignified burial option. 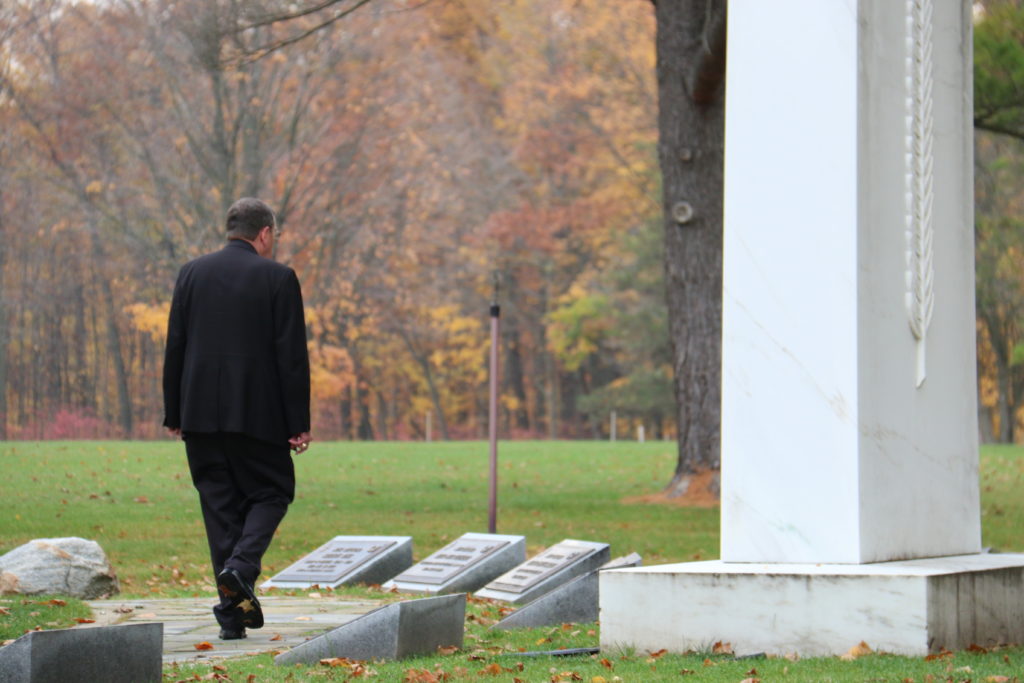 Archbishop Vigneron pays his respects to deceased former Detroit bishops during an All Souls Day remembrance service in 2016.

Catholic cemeteries in the Archdiocese of Detroit offer niches in mausoleums that accommodate the urns of the cremated remains. The niches allow families to memorialize the deceased by putting their names on the cenotaph, a plaque on the side of the mausoleum.

“The cremated body should be in the same state, a final resting place, just like any traditional burial,” Cortese said. “Some think they want their loved ones close to them, but where do those remains end up three or even eight generations down the road?”

Cortese acknowledged oftentimes remains aren’t interred for financial reasons, which is why the All Souls Remembrance Program allows families to bring in cremated remains for free, along with a copy of a death certificate, to Holy Sepulchre or Our Lady of Hope, to be interred in a community crypt.

Families have the opportunity, for a small cost, to have the deceased’s name engraved on the cenotaph.

“The theory out there is that some people just aren’t prepared to let go, they haven’t gone through the grieving process and feel closer to Dad or Mom by having their ashes with them,” Hojnacki said. “What we’re trying to do with our ministry is accompany them through the grieving process and bring about proper closure, showing how bringing them to a Catholic cemetery can allow for a burial in a place where the whole family can come and memorialize that person.”

Often, families who have been holding on to ashes of a loved one for years feel a great sense of relief when they are finally interred into a proper niche or crypt and given a more permanent place of rest, Cortese said. 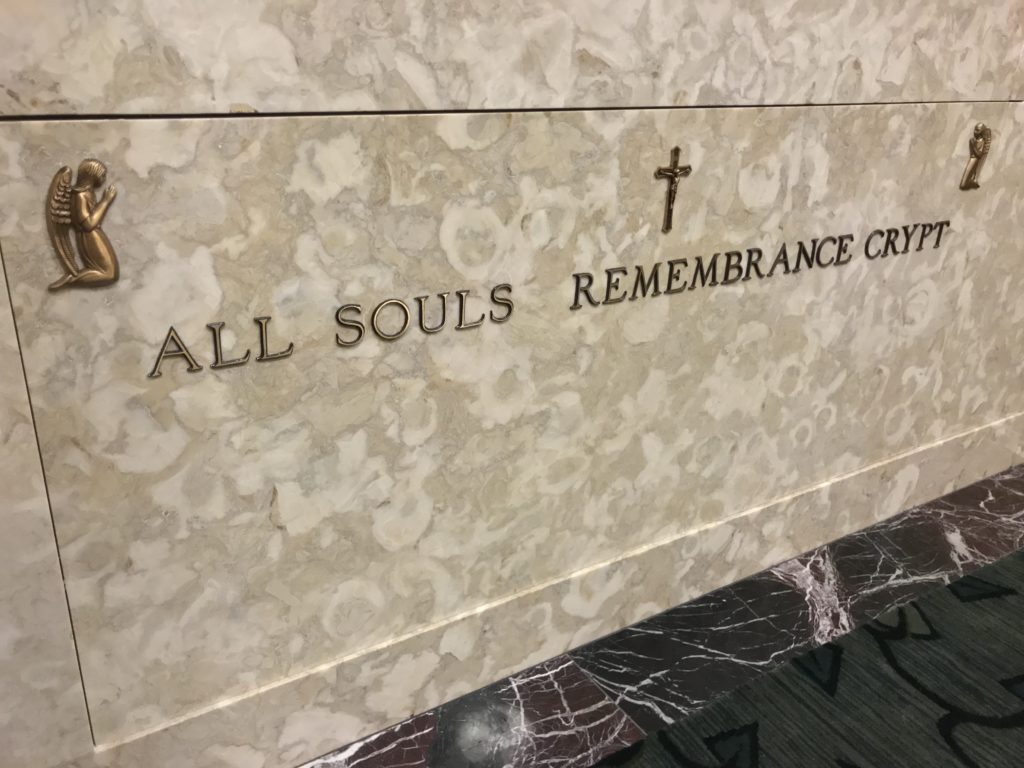 The All Souls Remembrance Crypt in Southfield houses the cremated remains of those were are interred as part of Catholic Funeral and Cemetery Services' All Souls Remembrance Program, which accepts the cremated remains of anyone, free of charge. (Courtesy Catholic Funeral and Cemetery Services)

“We find that families find solace when they have a place to come and reflect; it brings a sense of closure,” Cortese continued. “And we’ve had people who’ve come back and said they wish they had that place to come, that touchpoint.”

For All Souls Day, Cortese said families can bring in the cremated remains of a loved one, regardless of when they died, to a participating cemetery for the committal. Families who wish to participate in the All Souls Day service are invited to contact a cemetery to make an appointment with the cemetery’s family service adviser to walk through the process, complete paperwork for cemetery records and learn more about the interment process.

“All of our cemeteries have databases listing who is buried where, and we use that information for a lot of genealogy work,” Cortese said. “Whether it is the deceased’s name on the cenotaph or recorded in our records, all families will have the exact location where their loved one is.”

“We believe in a communion of saints, the resurrection of the dead,” Cortese continued. “I have my own loved ones buried here. Knowing I have people every day praying for my loved ones, it brings a great comfort.

"They say a cemetery is a place for the living; in truth, it really is for the loved ones left behind.”


An Act of Mercy and Faith

Read Archbishop Vigneron's pastoral note, "An Act of Mercy and Faith," on the dignity of Christian burial, at unleashthegospel.org.