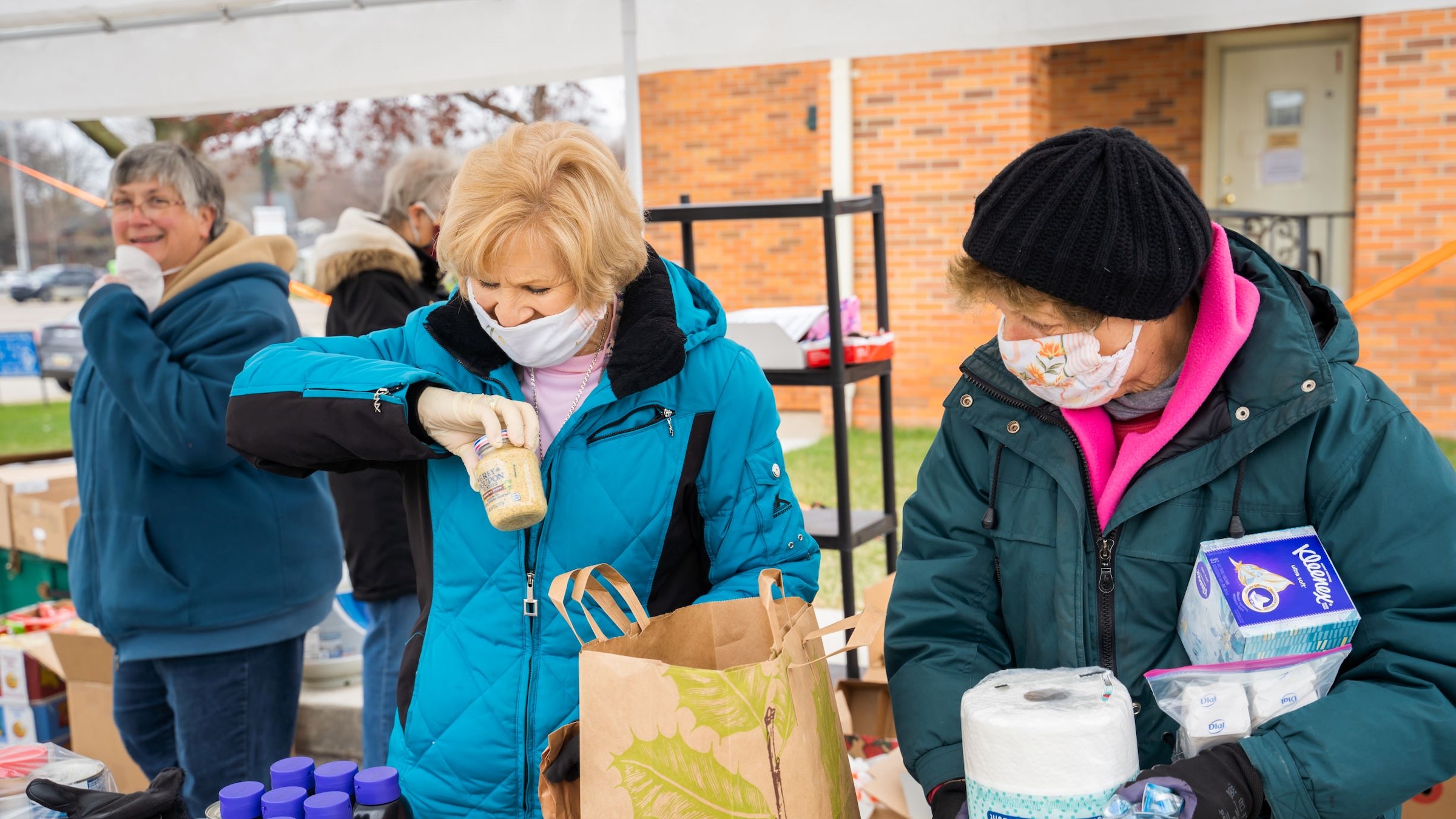 As unemployment rises across southeast Michigan, some parishes seeing ‘three to four times’ the usual need for food, leaders say

DETROIT — In Matthew’s Gospel, Jesus fed 5,000 people with just five loaves and two fish. The disciples didn’t know where the food came from, but they trusted the Lord to provide it anyway.

In 2020, the Church in the Archdiocese of Detroit faces a similar predicament. As unemployment rises as a result of the global pandemic, more and more families are turning to parish food pantries as a lifeline.

There are about 50 such parish-based pantries in southeast Michigan. And nearly all of them are seeing an increased need in light of COVID-19.

“The need for food is greater across the whole diocese,” Chris Leach, coordinator of the archdiocese’s Office of Christian Service, told Detroit Catholic. “It’s not just a city of Detroit problem. People everywhere need food if they’ve been laid off.”

Leach estimated some pantries are seeing “three to four times” their normal amount of traffic.

On Good Friday, the food pantry at St. Peter Parish in Mt. Clemens served 78 people, said Brian Cloutier, president of the parish’s St. Vincent de Paul chapter  — much higher than the usual 20 or so on a normal day. On average, the pantry at St. Peter has been serving approximately 30-35 people twice per week since the pandemic began.

As the need for food rises, complicating matters is that pantries must in some cases make do with fewer volunteers, given infection concerns.

“It’s not safe for volunteers to be close together, but at the same time the economy isn’t doing well and we’re seeing increased need,” Leach said. “So we asked, ‘What can we do to keep the food pantries open and the volunteers safe?’”

One solution has been the implementation of a central “hub” managed by Catholic Charities of Southeast Michigan for purchasing, packaging and delivering large quantities of food to parishes across the archdiocese. To address social spacing concerns, Catholic Charities is using Divine Child High School’s 5,100-square-foot fieldhouse in Dearborn to create more than 400 pre-packaged, 16-pound bags of non-perishable food per week.

Volunteers there began packaging food on April 27, and the first deliveries were made to parishes last week.

“We’re going to service any parish in the archdiocese that needs additional food, but the very, very heavy needs are in Detroit,” said Adam Perry, director of development for Catholic Charities of Southeast Michigan. “That’s where the majority of our food is going to go, because that’s where most of the pantries are really struggling.”

At least two large national Catholic organizations have stepped up with additional aid for the Detroit area. On April 7, the archdiocese received a $50,000 grant from the Knights of Columbus to purchase food, and Catholic Charities USA has also pledged to send a semi-truck full of food to southeast Michigan, which Leach estimated could contain another $30,000 to $50,000 worth of food.

“Because we can bulk buy and it’s not just every pantry buying food on their own, we’re able to get great prices through Gleaners and Forgotten Harvest,” Leach said.

Mike Carsten, director of neighborhood services for St. Aloysius Parish in downtown Detroit, said he’s grateful for the help in order to serve approximately 800 to 1,200 people who live in the downtown apartments surrounding the parish.

On April 29, the parish received 7,000 pounds of food from Gleaners and 200 bags from Catholic Charities, which included frozen hamburger, ground turkey, lunchmeat and hot dogs.

“Most of people we serve live on about $500 a month — that’s their social security checks,” Carsten said. “Now, the party stores have closed, and their ability to safely access transportation has disappeared — nobody feels safe getting on buses — so the people here are slowly running out of resources.”

Carsten said St. Aloysius is only on the “beginning edge” of serving the needs of downtown Detroit, especially as other food pantries have had to temporarily close to address volunteers’ safety needs.

“Similar to the hospitals, a lot of parishes need these things to operate their food pantries. They have to clean their facility every day,” Perry said. “If you’re good at sewing and you’re making masks at home, our volunteers and clients can use them. If you’re out at the grocery store and you’re buying a bottle of hand sanitizer, buy one for us.”

At All Saints Soup Kitchen and Food Pantry in southwest Detroit, workers retrofitted the building with a plexiglass barrier and a slide to create about 8 feet of space between clients and volunteers, Perry said.

All Saints, which is operated by Catholic Charities, reopened April 14, and has since served approximately 50-60 families on Tuesdays and Wednesdays.

“Anybody who’s new or has special needs, we have a foyer where people walk in and wait, and I have a baby monitor set up so I can talk to them,” Carsten said.

At St. Peter Parish, the food pantry has operated outdoors since the pandemic began, Cloutier said, serving clients from a drive-up tent.

“People stay in their cars, give us their ID, and we give them pre-packed boxes of food that feed up to three people,” Cloutier said. “We add some things in there like cereal, an extra mac and cheese, a can of tuna, produce, and whatever meat we get from Forgotten Harvest. And everybody gets a dessert.”

“We can’t get close to people to talk to them for a long time, but we get many, many thank yous,” Cloutier said. “We’ve had a lot of new people, people who are out of work and need a little extra help. Lots of people are in a situation they’ve never been in before.”

Serving those who can’t go out

While food pantries are a tremendous help to those who’ve lost their jobs, volunteers are also mindful of those who can’t leave their homes to pick up groceries.

Since Catholic Charities suspended its normal senior programs, it has diverted staff to offering phone support and no-cost delivery services for those unable to venture out, Perry said.

As of May 5, volunteers had made 1,783 outreach calls and 593 deliveries to seniors and at-risk adults, Perry said. Catholic Charities also has conducted 2,187 “telehealth” sessions with those in need of virtual counseling services.

Many of St. Aloysius’ clients are also seniors, some with underlying health conditions. Carsten’s wife, Kathleen, is the parish nurse, and calls to check on those with medical concerns, Carsten said.

“We have people who tell us they aren’t feeling well, and we respond and monitor and guide people who have nowhere else to turn when they’re scared or wondering what’s going on,” Carsten said. “Some are completely ignorant of what’s going on around them, and there’s denial, too. The intimate, personal reaching out is probably the most important thing we’re doing.”

Carsten said a team of 8-12 volunteers follows up to ensure clients who aren’t able to come to the food pantry have access to meals, toilet paper, cleaning supplies and household essentials.

“We have volunteers making hot meals and delivering them,” Carsten said. “One of our parishioners is 99 years old, and we have others who are blind.”

At St. John Neumann Parish in Canton, Shannon Pryce has been working with the local police department to deliver meals with the help of the parish’s deacon, Deacon Pat Conlen, the Canton police chaplain.

“They’ve been doing calls to all the seniors they have in their database and doing welfare checks on them,” Pryce said. “So I’ve been taking them bags of food every week to distribute to seniors who are afraid to go out or can’t.”

Parishioners have continued to donate food to St. John Neumann, which Pryce then assembles and takes to the police station. She also continues to make deliveries to senior parishioners who need it.

“As long as they call me and as long as we have food — and we will for quite a while — we will be delivering to them,” Pryce said.

“We’re only at the beginning of this, and I don’t see it going away soon.”