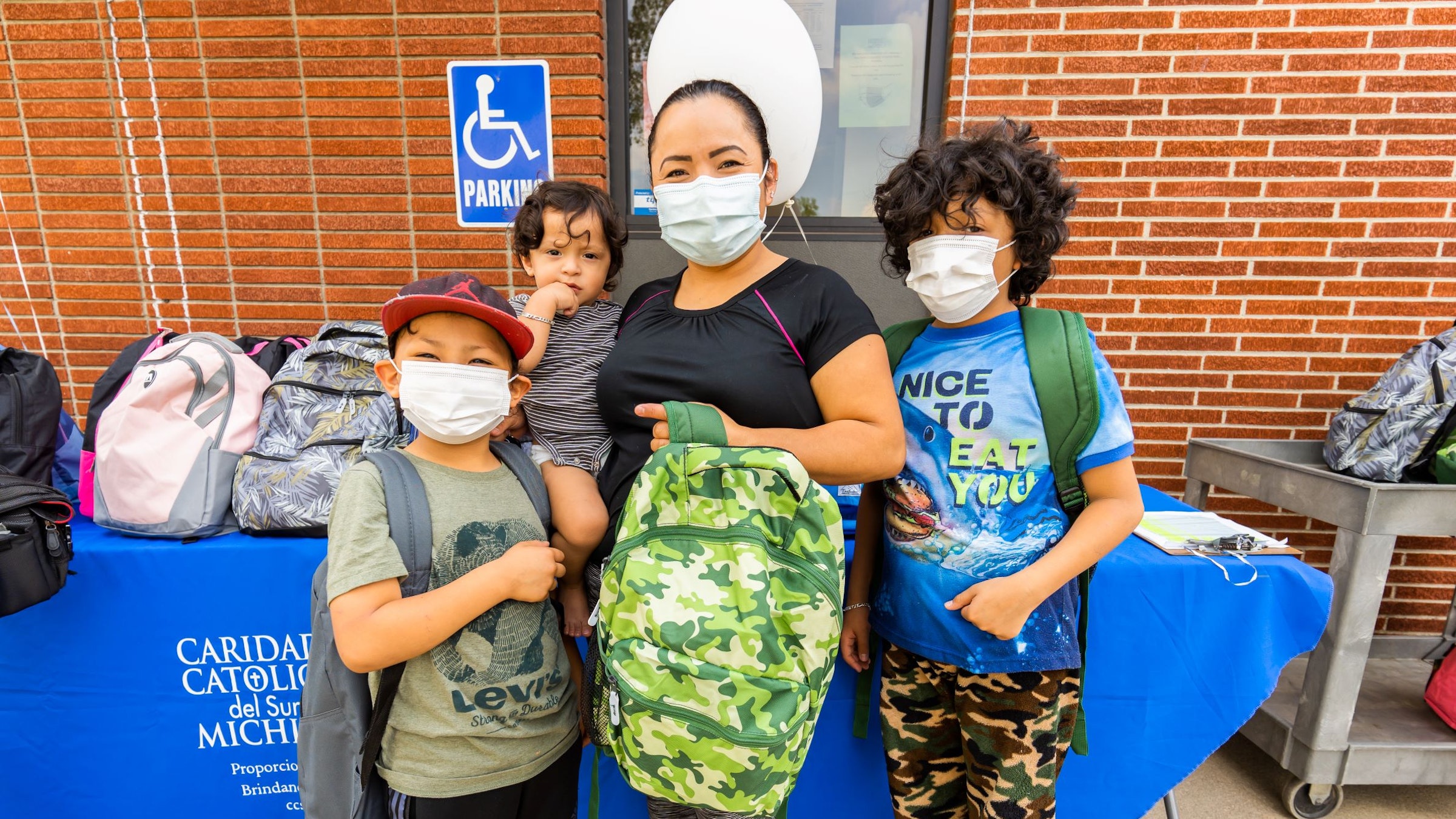 The Silva family poses with the backpacks they received during a back-to-school giveaway Aug. 19 at La Casa Amiga, a Pontiac-based Hispanic outreach ministry sponsored by Catholic Charities of Southeast Michigan. The backpacks and school supplies came from partner parishes and donors to Catholic Charities of Southeast Michigan. (Photos by Valaurian Waller | Detroit Catholic)

Back to school giveaway eases burden on Hispanic families, connecting donors to recipients through Pontiac-based ministry

PONTIAC — To the outsider, it’s just a backpack.

But to the child receiving the backpack, it’s a gateway to a better future and a sign of a community that cares.

Cars pulled in and out of the parking lot of La Casa Amiga, a ministry in Pontiac sponsored by Catholic Charities of Southeast Michigan, on Aug. 19 as volunteers waiting with backpacks for kids in need lined the sidewalks.

The back-to-school drive was possible thanks to donations from generous parishioners, churches, schools and nonprofits throughout the Archdiocese of Detroit, said Isabella Agby, director of marketing and communications for Catholic Charities.

“We’ve been doing this program for a few years, and it’s something families look forward to,” Agby told Detroit Catholic. “The kids actually give a list of supplies we need, so it’s like ‘back to school Christmas,’ for these kids because it’s that big of a deal. It’s not just the basics; each backpack is catered to each child’s need.”

La Casa Amiga — translated as “Friend’s House” — is Catholic Charities of Southeast Michigan’s Pontiac-based ministry serving Hispanic families, many of them migrants, in the Archdiocese of Detroit. The ministry includes a legal clinic, social service assistance, English as a second language (ESL) classes, a GED program, financial literacy and job training programs, among others.

Many of the families La Casa Amiga serves are low income, and with the steep cost of back-to-school shopping, the 200 to 250 backpacks stocked with pens, pencils, notebooks, calculators and other supplies are a huge help to the community.

“Families in our community have been hit super hard by COVID, and a lot of support services that normally supply backpacks took a huge hit,” said Rebecca Olszewski, director of La Casa Amiga’s legal clinic and community programs. “School supplies are expensive — I have five children, I can tell you how expensive they can be — but we’re super blessed to help our families get what they need.”

The backpack giveaway was organized with the help of volunteers, who spent Wednesday and Thursday packing the individual bags, Agby said. Beyond being specifically catered to each child’s needs, the backpacks also come with a note of encouragement from the packer.

“The team here at La Casa Amiga helps these families from the moment they come into Michigan,” Agby said, adding families can qualify for assistance based on their income or number of children. “Our team goes through a process of paperwork and registers them in our system, all part of making sure we are helping those most in need.”

On distribution day, backpacks were neatly ordered on a table, and families came in staggered sessions to La Casa Amiga’s location at 76 Williams Street to pick up the supplies and share words of gratitude.

“My kids are in the mentoring program at Catholic Charities,” Imelda Hernandez of Rochester, who picked up four backpacks for her children, told Detroit Catholic through a translator. “I have one in high school, two in middle school and one in third grade, and they are excited to come back to school. It’s so stressful to find supplies for each child; it’s so expensive. La Casa Amiga is fantastic.”

Beyond the financial help for parents, Olszewski said the backpacks and school supplies are a big help for families after a year when many social services were shut down because of COVID concerns.

“A lot of families have had a really difficult time with COVID and a lack of technological devices for kids to work from home — they were using their parents’ phones,” Olszewski said. “Some school districts are less well off, and couldn’t get tablets and computers until later. By giving these families supplies to participate and learn in school, we’re supporting them in a way they need it most.”

La Casa Amiga’s backpack drive is just one way Catholic Charities of Southeast Michigan reaches out to the community, Agby said. By building relationships with parishes in the community, partner agencies and volunteers, the nonprofit charitable service arm of the Archdiocese of Detroit is able to reach thousands in need each year.

“This is one of many program that Catholic Charities has put together to help specific communities,” Agby said. “As a whole, we are one big organization, but we have different offices serving the whole six counties of the archdiocese. Each community has a need that is a little different.

“It’s always nice to have programs like this, bringing neighbors together to provide something that people need,” Agby added, “matching people’s desire to give with people’s needs.”

In-person registration for Catholic Charities of Southeast Michigan’s Annual Celebration on Sept. 11 at the Basilica of Ste. Anne de Detroit is sold out, but registration for the virtual livestream is still available for $25.

This event will include a performance by Catholic singer, storyteller, and inspirational speaker ValLimar Jansen. Proceeds from the event support Catholic Charities’ offices and ministries throughout Metro Detroit, which serve an estimated 20,000 individuals each year.