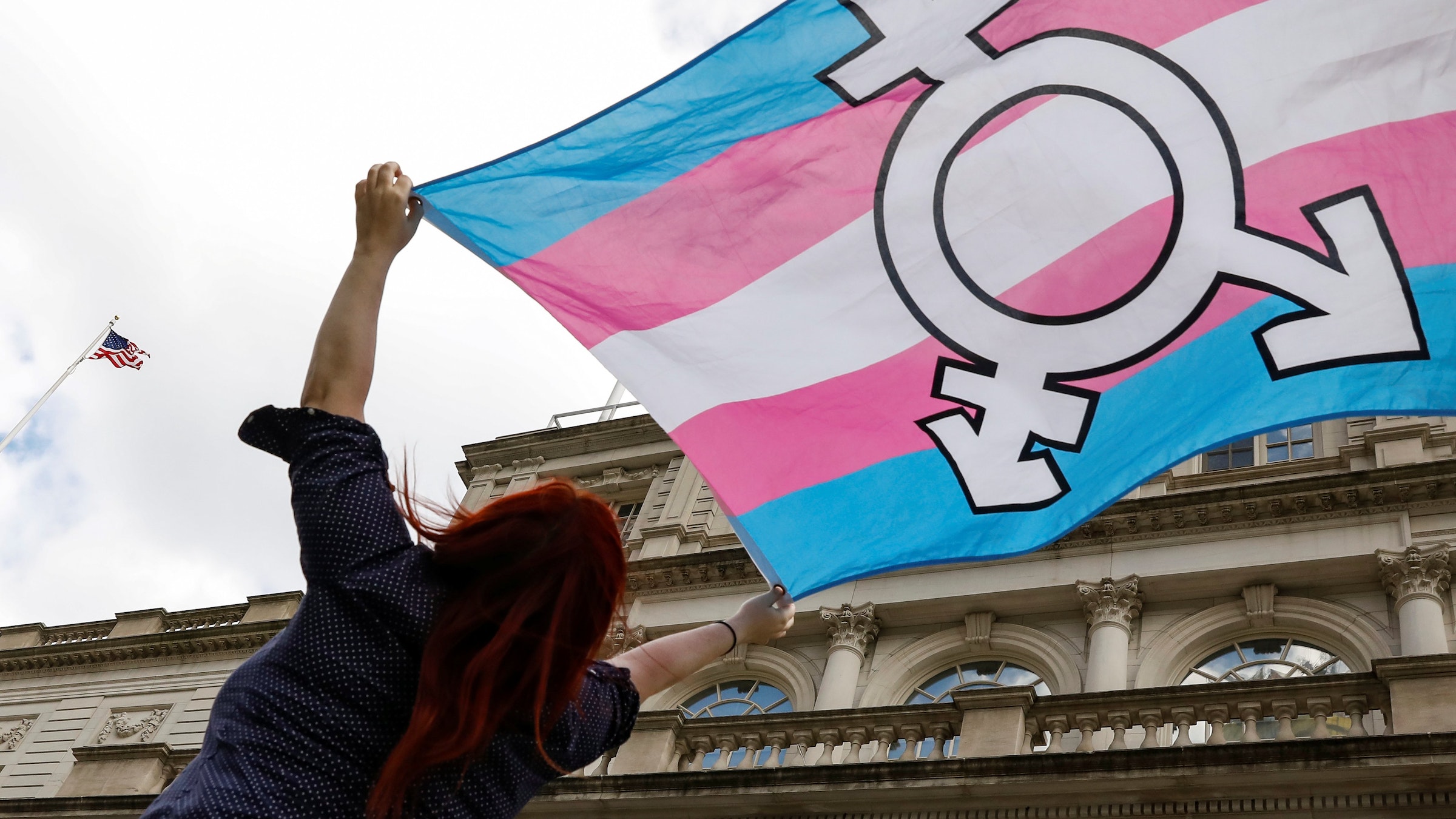 A person in New York City holds up a transgender flag Oct. 24, 2018. The Biden administration April 20, 2021, appealed a January 2021 ruling that struck down an Obama-era mandate that would force doctors and hospitals to perform gender-transition procedures against their conscience and professional medical judgment. (CNS photo/Brendan McDermid, Reuters)

PHILADELPHIA (CNS) -- The Philadelphia-based Catholic Medical Association Aug. 26 joined in a lawsuit challenging the Biden administration's mandate that doctors and hospitals perform gender-transition procedures on any patient despite any moral or medical objections of the doctor or health care facility.

"Biological identity must remain the basis for treating patients," said Dr. Michael Parker, president of the association, a national, physician-led community of more than 2,300 health care professionals in 114 local guilds.

The suit was filed Aug. 26 in U.S. District Court by Alliance Defending Freedom, a national faith-based nonprofit in Arizona that focuses on legal advocacy.

Other joining the suit are Dr. Jeanie Dassow, a Tennessee OB-GYN doctor who specializes in caring for adolescents, and the American College of Pediatricians, made up of more than 600 physicians and other health care professionals in 47 states who treat children.

A news release said the association and the college joined the suit on behalf of their members. It was filed in U.S. District Court for the Eastern District of Tennessee in Chattanooga.

The suit over what it opponents call a "transgender mandate" names as defendants Secretary Xavier Becerra, head of the Department of Health and Human Services, and Robinsue Frohboese, acting director and principal deputy of the HHS Office for Civil Rights.

Alliance Defending Freedom's attorneys argue in the filing that HHS has reinterpreted Section 1557 of the Affordable Care Act, which prohibits sex discrimination, "to include gender identity and thus require gender-transition interventions, services, surgeries, and drugs on demand, even for children, no matter a doctor’s medical judgment, religious beliefs or conscientious objection." If doctors and hospitals do not comply, they will be held liable for discrimination.

"This mandate not only puts the health and safety of our patients in jeopardy, but it in effect also mandates that health care providers give up their fundamental right to conscience," Parker added in a statement. "This sets a dangerous precedent with incalculable implications for the ethical practice of medicine.”

Ryan Bangert, the alliance's senior counsel, said in a statement: "The laws of our land and the medical profession have long respected the biological differences between boys and girls and the unique needs they each present in health care.”

"Forcing doctors to prescribe transition hormones for 13-year-olds or perform life altering surgeries on adolescents is unlawful, unethical and dangerous," he said.

On Aug. 9, a U.S. District Court judge ruled to block the so-called "transgender mandate" in its current form as proscribed by the Biden administration.

Judge Reed O'Connor of the District Court for the Northern District of Texas in Wichita Falls ruled in Franciscan Alliance v. Becerra.

Franciscan Alliance, based in Mishawaka, Indiana, is a Catholic health care system now known as Franciscan Health that operates hospitals serving Indiana and one hospital in Illinois and employs over 18,000 full- and part-time employees.

"The Christian plaintiffs contend that violation of their statutory rights under RFRA (Religious Freedom Restoration Act) is an irreparable harm," O'Connor said in his ruling.

"The court agrees," he said, "and concludes that enforcement of the 2021 interpretation (of Section 1557) forces Christian plaintiffs to face civil penalties or to perform gender-transition procedures and abortions contrary to their religious beliefs -- a quintessential irreparable injury.”

"The court grants plaintiffs' request for a permanent injunction and permanently enjoins" HHS, Becerra and all HHS-related divisions, agencies and employees "from interpreting or enforcing Section 1557 of the Affordable Care Act.”

In 2020, the Trump administration put in place a final rule that eliminated the general prohibition on discrimination based on gender identity and also adopted abortion and religious freedom exemptions for health care providers. But the courts blocked this rule change.

In 2021, shortly after he was inaugurated, President Joe Biden issued an executive order declaring his administration would apply in all areas -- including the ACA -- the ruling by the U.S. Supreme Court's ruling in Bostock in 2020 that discrimination based on sex outlawed Title VII of the Civil Rights Act of 1964 covers people who are gay or transgender.

O'Connor's ruling is "a victory for common sense, conscience and sound medicine," said Luke Goodrich, vice president and senior counsel at the Becket Fund for Religious Liberty, based in Washington. He is the lead counsel for the plaintiffs in the Franciscan Alliance case.

On Jan. 19, the U.S. District Court for the District of North Dakota in Fargo blocked the mandate in ruling in in a lawsuit filed on behalf of Franciscan Alliance/Franciscan Health, and the Christian Medical and Dental Associations. The states of Texas, Kansas, Kentucky, Nebraska and Wisconsin also joined in the suit.

The Biden administration filed an appeal of that ruling April 20 with the U.S Court of Appeals for the 8th Circuit, based in St. Louis.