Catholic prayers for peace interrupted after alleged assault on officer 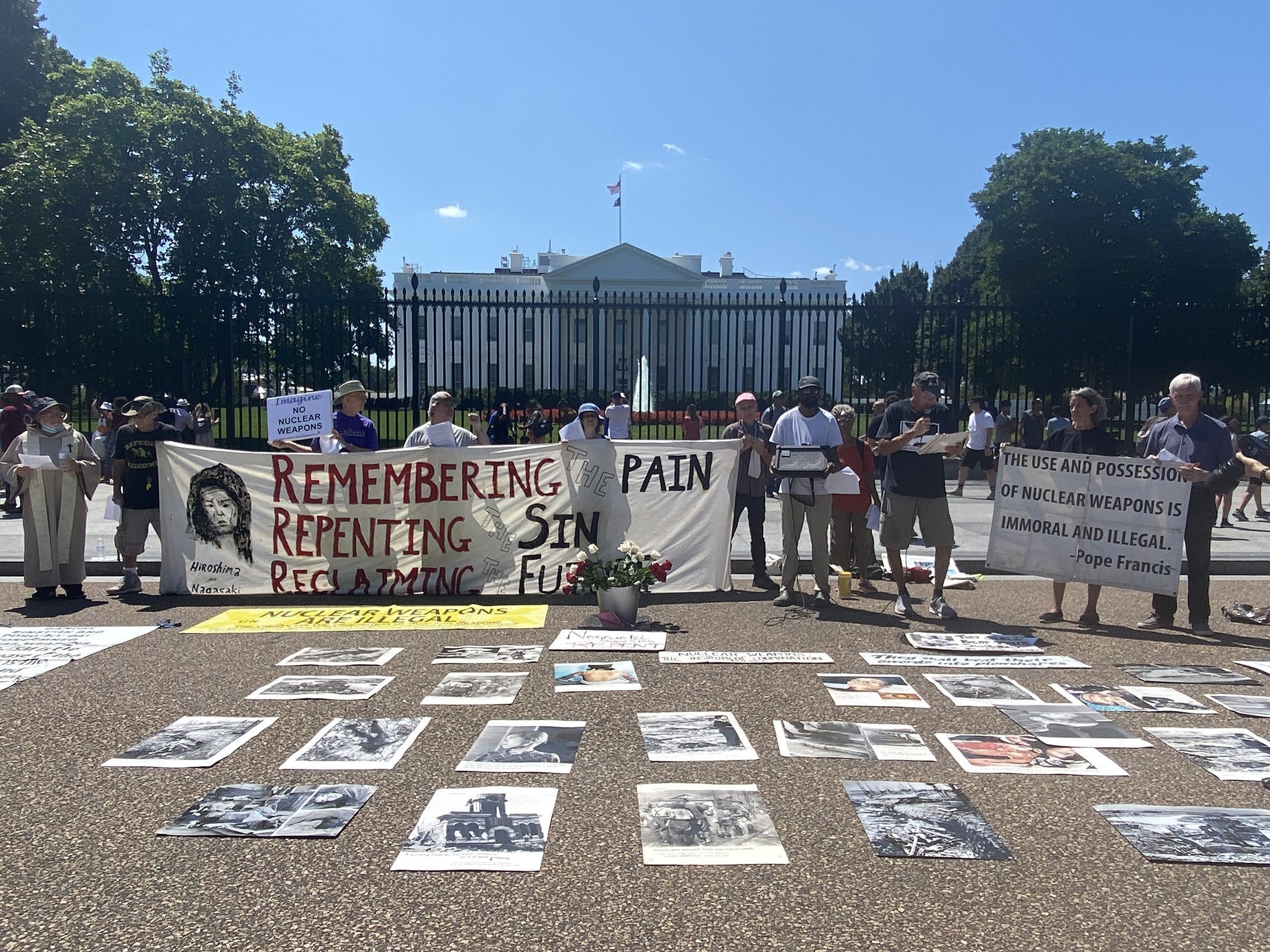 Members of several Catholic organizations gather in front of the White House Aug. 9, 2022, to pray for peace on the 77th anniversary of U.S. bombing of Nagasaki, Japan, while also remembering those who perished and survived the Aug. 6, 1945, bombing of Hiroshima. The activists called for peace through eliminating nuclear weapons and peace from environmental sins committed against the planet. (CNS photo/Rhina Guidos)

WASHINGTON (CNS) -- An Aug. 9 event by Catholics to promote peace in the world was interrupted by what the U.S. Secret Service said was an unprovoked assault on one of its officers.

The activists had displayed photos depicting the destructive consequences of that decision and to pray that it never happens again.

But their annual event promoting peace encountered its first interruption when a U.S. Secret Service agent began yelling at tourists and the bevy of protesters who habitually gather in the area to evacuate toward an adjacent park.

After the Catholic group and protesters and tourists moved to a green area called Lafayette Park, also in proximity of the president's residence, they were again interrupted as officers evacuated the park without providing a reason.

The Catholic peace activists calmly gathered their banner that read, "Remembering the pain, repenting the sin, reclaiming the future," and kept moving their service along to an area that led toward the White House.

"It's like the Stations of the Cross," said a calm Art Laffin, of the movable prayer service. Laffin is a member of the Dorothy Day Catholic Worker in Washington, which organized the event.

Some also had met earlier in the sweltering summer heat to pray outside the Pentagon in nearby Virginia.

The group displayed photos of destroyed buildings, including a Catholic cathedral, as well as people injured and dead from the Aug. 6, 1945, bombing of Hiroshima and the Aug. 9, 1945, bombing of Nagasaki, and placed red and white roses on top of them.

"Nuclear weapons are sinful and idolatrous," the group prayed, reading from a prepared statement Aug. 9 marking the 77th anniversary of both U.S. bombings.

Jesuit Father Pedro Arrupe, who later became the superior general of the Society of Jesus, was serving near Hiroshima when the bomb leveled the city on the feast of the Transfiguration of Christ.

"I shall never forget my first sight of what was the result of the atomic bomb: a group of young women, 18 or 20 years old, clinging to one another as they dragged themselves along the road," Father Arrupe wrote.

"One had a blister that almost covered her chest; she had burns across half of her face, and a cut in her scalp caused probably by a falling tile, while great quantities of blood coursed freely down her face," he said.

"On and on they came, a steady procession numbering some 150,000," he continued. "This gives some idea of the scene of horror that was Hiroshima. ... We did the only thing that could be done in the presence of such mass slaughter: We fell on our knees and prayed for guidance, as we were destitute of all human help."

Father Arrupe had studied medicine before entering the Society of Jesus and used what he knew to treat the dying and injured.

The National Security Archive, which has trove of declassified information, says on its website that "the total number of deaths in both cities is unknowable."

The estimate for deaths in Hiroshima is "in the range of 70,000 to 140,000, while for Nagasaki, the number is between 40,000 and 110,000" and includes "American and Allied prisoners-of war who were held in Hiroshima and Nagasaki at the time," the archive says on its website.