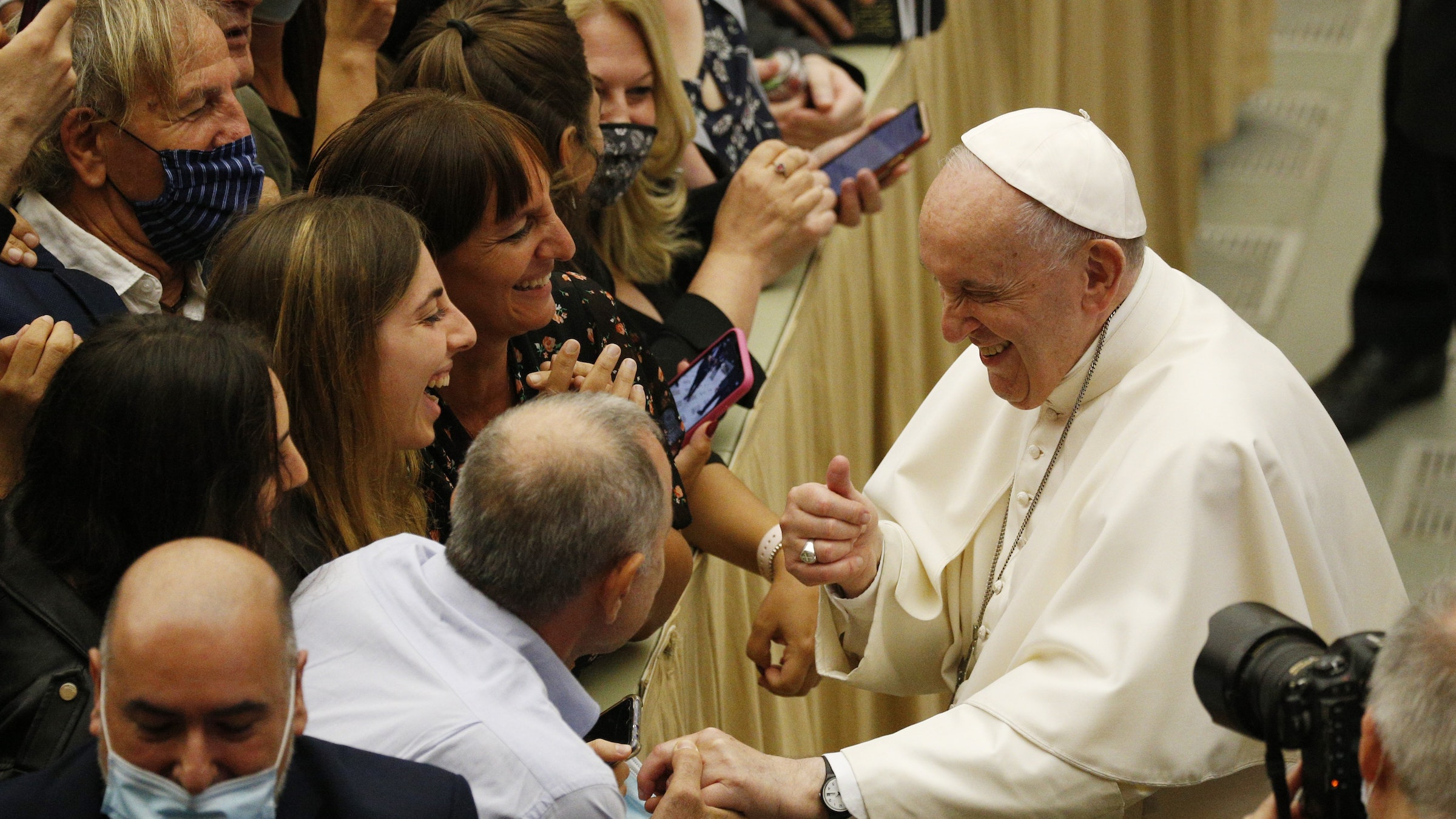 Pope Francis greets people during his general audience in the Paul VI hall at the Vatican Sept. 22, 2021. (CNS photo/Paul Haring)

VATICAN CITY (CNS) –– A living faith draws strength from remembering the past while continuing to grow in love of God and service to others, Pope Francis said.

The pope said he saw that kind of faith on display Sept. 12-15 as he visited Hungary and Slovakia.

Reviewing the trip Sept. 22, Pope Francis told people at his weekly general audience that the roots of identity and faith must be "conserved –– not like museum exhibits, not ideologized and exploited out of interests of prestige and power (or) to consolidate a closed identity" –– but as reminders of what God has done and as inspiration for growing closer to God and to other people.

In Hungary Sept. 12, Pope Francis celebrated the closing Mass of the International Eucharistic Congress where, he said, participants were "embraced by the cross that stood above the altar, showing the same direction indicated by the Eucharist, namely the path of humble and selfless love, of generous and respectful love toward all, of faith that purifies from worldliness and leads to what is essential.”

With liturgies in the Roman and Eastern rites, ecumenical gatherings, meetings with members of the Jewish community, with Roma and with the homeless, Pope Francis said his trip was "a pilgrimage of prayer in the heart of Europe, beginning with adoration and ending with popular piety.”

"This is what the people of God are called to, above all: to worship, to pray, to journey, to wander, to do penance, and in this to feel the peace and the joy that the Lord gives us. And this is of particular importance on the European continent, where the presence of God is being diluted by consumerism and in the 'vapors' of a unitary way of thinking that is the fruit of the mixture of old and new ideologies," he said. "In this context too, the healing answer comes from prayer, witness and humble love.”

Visiting the two Central European nations, "the heart of Europe," Pope Francis said he kept thinking about how the founders of the European Union had a vision of a continent at peace where different nations, cultures and faiths would thrive without being seen as a threat to one another.

In such a vision, he said, "roots are a guarantee of the future: from them sprout thick branches of hope.”

"Do we remember our roots? Our parents and grandparents?" he asked. A connection with the older generation gives the roots the nourishment they need to continue to grow.

"We don't say, 'Go and take refuge in the roots,' no, no," he said. Instead, the message is, "Go to the roots, get nourishment there and move forward, take your place" in society.

"I will repeat what I've said many times –– the verse that is so beautiful –– 'All that is blooming on the tree comes to it from what it has underground,'" the pope said.