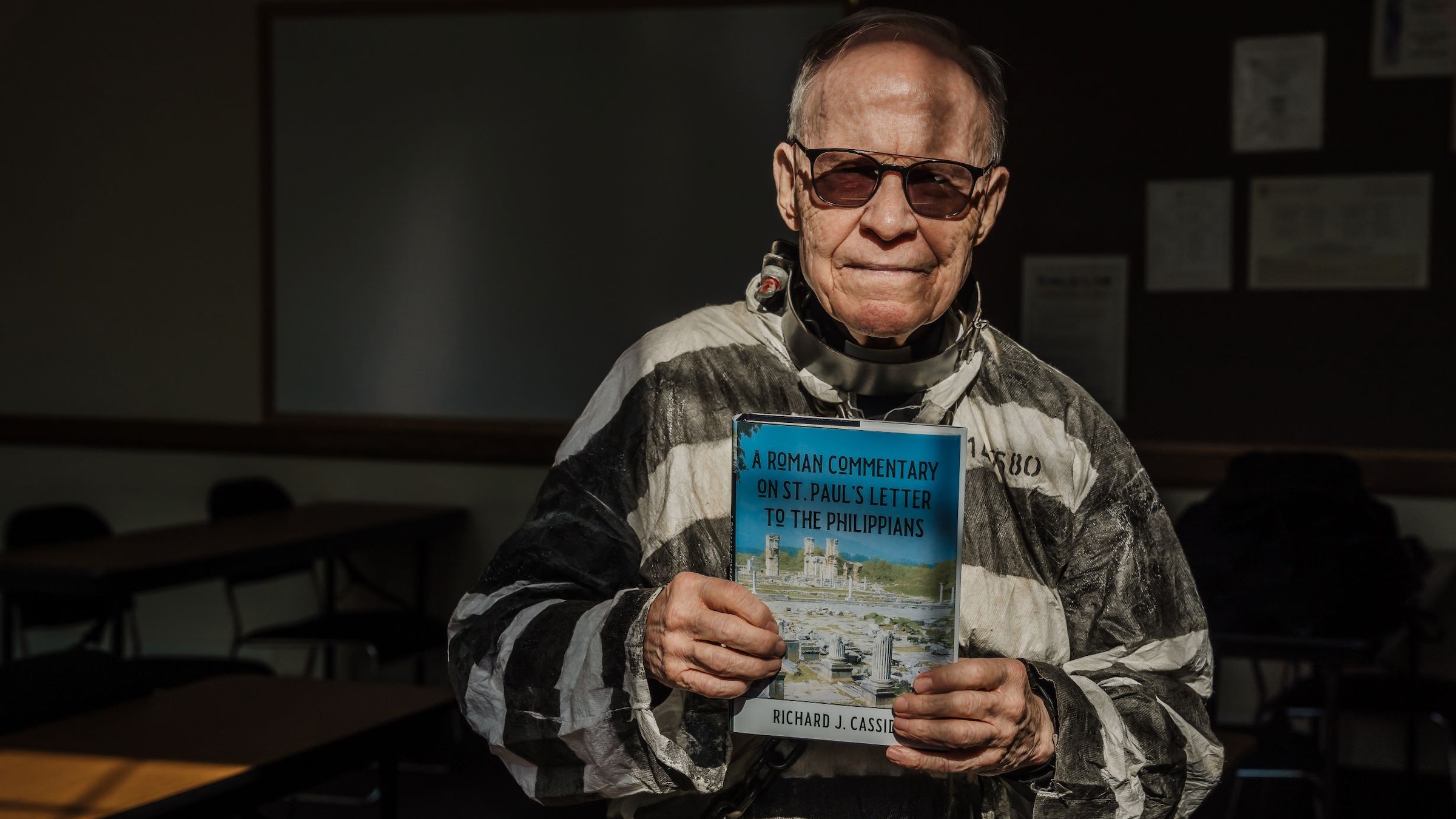 Fr. Richard Cassidy, professor of Sacred Scripture at Sacred Heart Major Seminary, dresses in Roman prisoner garb as he holds a copy of his newest book, "A Roman Commentary on St. Paul’s Letter to the Philippians." Fr. Cassidy's eighth scholarly work, the book explores the subversive nature of St. Paul's Letter to the Philippians, which the apostle wrote from behind bars in a Roman prison cell. (Photos by Valaurian Waller | Detroit Catholic)

DETROIT — It was a tough decision for Rick Cassidy as he began graduate studies at the University of Michigan in mid-1960s. Would he take the course on Imperial Rome, because of his love of history, or the course History of Slavery, because of his deep concern for social justice?

The Dearborn native chose the course on slavery. The insights he acquired have helped to guide Fr. Richard Cassidy’s scholarly work for three decades, including his latest work, "A Roman Commentary on St. Paul’s Letter to the Philippians" (Herder & Herder, 2020).

Paul’s letter, composed in chains and secreted out of his Roman jail cell, is intentionally “counter-slavery,” argues Fr. Cassidy, professor of Sacred Scripture at Sacred Heart Major Seminary since 2004, as well as “counter-emperor.” At its core, Philippians is an underground epistle that subverts the Roman power structure and the “lordship pretensions of Nero.” Reviewers praise the “distinctive thesis” of Fr. Cassidy’s groundbreaking work as “fresh and illuminating,” making for “fascinating reading.”

This is Fr. Cassidy’s seventh book that examines the influence of Roman rule on the writers of the New Testament, and his eighth book overall. He returned to Ann Arbor on a rainy afternoon last year to discuss his newest work.

Dan Gallio: St. Paul’s Letter to the Philippians is most known for its soaring declaration of the divinity Christ, before whom one day “every knee must bend,” and “every tongue proclaim” his universal lordship (2:6-11).

Your new book presents a unique argument: Paul’s letter is primarily a “subversive” document of resistance against the Roman Empire — particularly against emperor worship and slavery. How did you arrive at this against-the-grain interpretation? 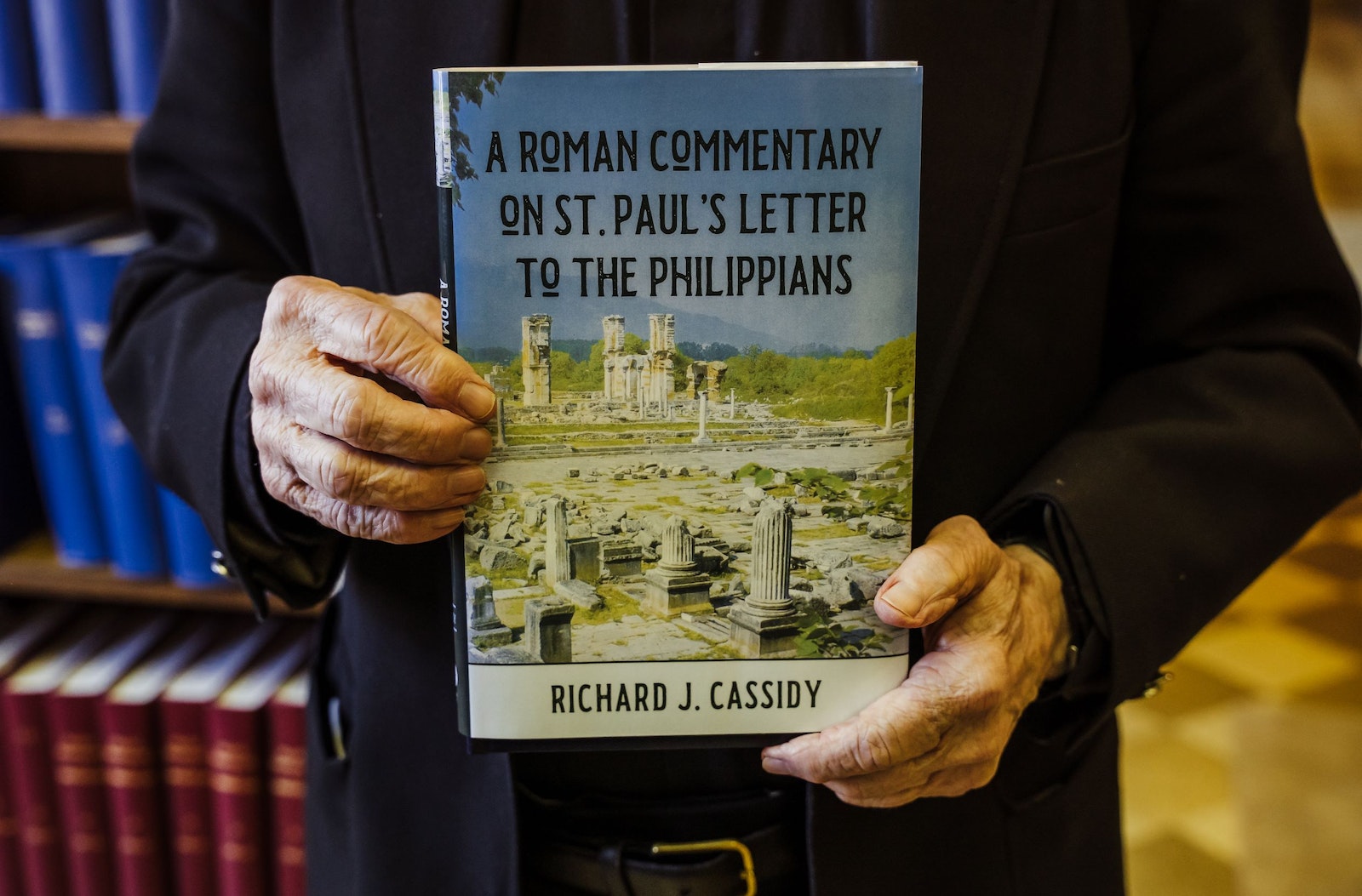 "A Roman Commentary on St. Paul’s Letter to the Philippians" (Herder & Herder, 2020) is Fr. Cassidy's eighth book and a follow-up on his 2001 work, "Paul in Chains: Roman Imprisonment and the Letters of St. Paul"

Fr. Cassidy: These insights were the result of long hours with the text, spending a lot of prayer time for guidance, as to Paul’s situation.

The issue of slavery came into play strongly. I now saw that Jesus was executed as a violator of Roman sovereignty, condemned by Pilate, executed under Emperor Tiberius — and that this was the slave’s form of death. This is a crucial point.

In regards to the two topics you mention, I had the intuition that the Letter to the Philippians was “counter-emperor cult” and “counter-slavery.” First, the self-emptying of Christ from on high — descending downward into human form, downward, downward to the point of the slave’s death on a Roman cross — and then you have St. Paul’s wonderful words in chapter 2, verses 9-11.

My insight was that there is going to be a redressing of what has happened. Because of the great faithfulness of Jesus Christ, the Father intervenes and begins the lifting up, the ascending of Christ, where the Father exalts Jesus and bestows upon him “the name above every other name.”

So I can now speak about this famous passage in terms of a kind of “drama”: four scenes that represent the descent of Jesus, and four scenes that represent his ascent, akin to a medieval passion play. The Father intervenes on Christ's behalf, conferring upon him the name of “Lord.” Now all of creation, including the emperor, the governor, the imperial personnel, are all subject to Jesus. They have to prostrate themselves before the name of Jesus.

DG: So, essentially, Philippians is subversive because it makes a political statement as much as a theological one.

FC: Yes, but for some, it is a great privilege to genuflect at the name of Jesus. This includes slaves! Paul had integrated slaves into his community in Philippi. They were empowered now to proclaim the name of Jesus, standing alongside free men and women. They are standing alongside the Roman imperial power structure, all involved in the same process of bowing before Christ and proclaiming his name.

And that name is “Lord.” Jesus is being acclaimed as Lord, and not the emperor, to the glory of God the Father. This is the decisive element of Philippians 2:6-11, blended together in this one passage.

DG: You provide a 44-page introduction to the social situation of the Roman colony of Philippi. Why did you feel such an informative but lengthy introduction was necessary to support your thesis?

DG: Your appendices are extensive, too, like bookends to the introduction, driving the thesis home again using illustrations.

FC: There is one illustration of a monument where slaves are chained, and a slave trader is proclaiming his prowess as a slave trader. This monument to the degradation of slavery was at a city adjacent to Philippi. Paul almost certainly passed by it on his way to and from Philippi. It was discovered back in the 1930s and almost destroyed in the war by Nazi bombings.

DG: Paul is sometimes criticized by revisionist commentators for not rejecting the institution of slavery in his letters. Is your book an answer to these critics?

FC: Paul's approach to slavery is complicated. There are some letters where he seems to envision the imminent return of Christ. Possibly he minimized the importance of slaves being freed in these letters. However, in Philippians, his final letter before his death, he addresses the issue definitively. It is very undermining of slavery.

I intended to de-establish the idea that Paul acquiesced to slavery. He did not acquiesce. The laudatory prepublication comments by scholars make me think the book will have a decisive role in re-imaging Paul. 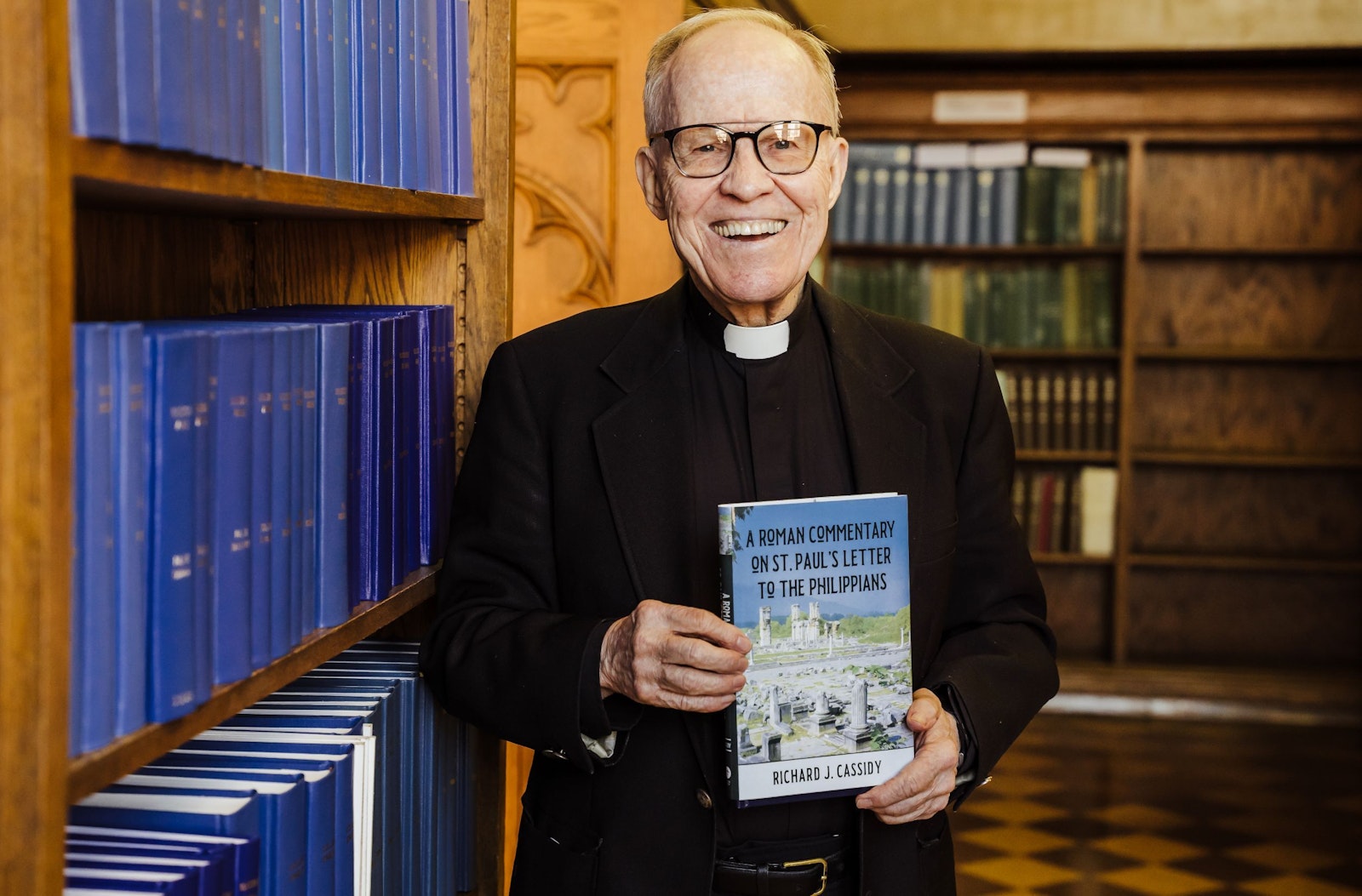 Against a prevailing notion that St. Paul "acquiesced" to the idea of slavery in his writings, Fr. Cassidy's book aims to counter the idea by showing how St. Paul's Letter to the Philippians actually served a subversive purpose in a Roman empire dominated by emperor worship and tight controls.

DG: Back to Philippians 2:6-11. Why do you maintain this passage is not a hymn or baptismal catechesis, as is customarily believed, but is an original composition of Paul? Is this position another example of your counter exegesis?

FC: This is not some other pre-existing hymn. No! This is fresh imaging. Visceral imaging. This is intensity from identifying with Christ as the “slave crucified.” No one else could have composed this passage. And Paul could not have composed this passage until he was in Roman chains and could see the threat posed against Jesus by the counterfeit claims that Emperor Nero is Lord.

DG: It’s almost like the passage is “supra-inspired,” that he would get such an original insight while in such dreadful circumstances.

FC: Correct. And there is a real question as to how this letter could be transmitted from prison, with the security and censorship. In garments? In pottery? It is possible the original written letter was confiscated. So how is Paul is getting his subversive thoughts past the Roman guards?

I suggest in my book that Paul was drilling his associates, Timothy and Epaphroditus, to memorize his letter, given the role of memory in early Christian life.

DG: With your busy teaching and pastoral duties, where to you find the motivation and energy to produce such a thoroughly researched, and beautifully written, work of scholarship?

DG: Is the Spirit driving you to another book?

FC: I would say so. After a book comes to publication, there is always a kind of mellowing period. So right now I have not identified the next project. I am appreciating the graces I have received from this book, and trusting that the same Spirit who has shepherded me through this sequence will still stand by me, guiding me forward.

This article originally appeared in Mosaic, the magazine of Sacred Heart Major Seminary. It is republished with permission.