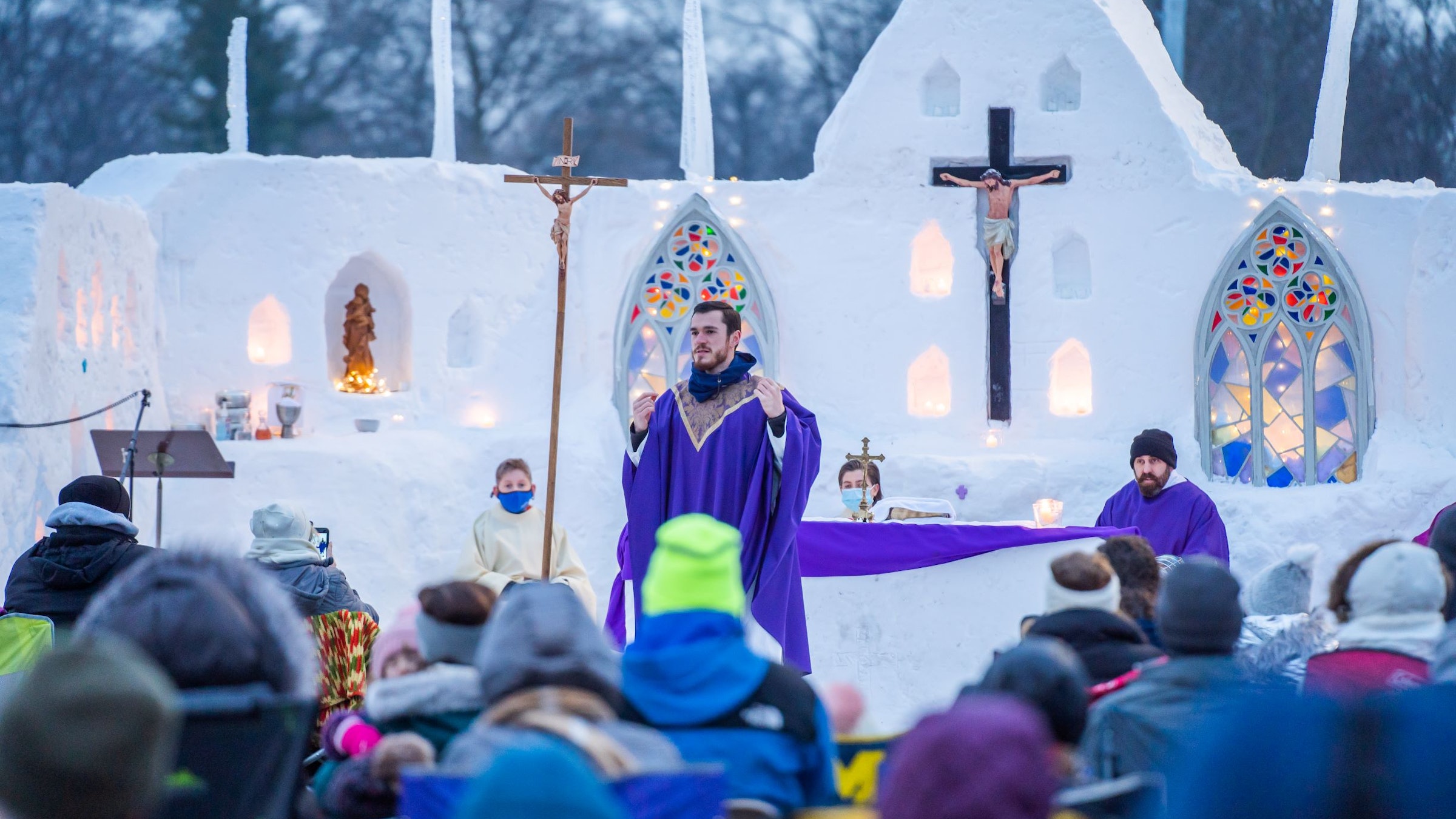 Divine Child associate pastor Fr. David Pellican preaches Feb. 21 in a makeshift snow chapel constructed by students and parishioners of the Dearborn parish. Fr. Pellican said the chapel took a week to construct, with students doing the heavy lifting and parishioners donating items such as statuary and candles for a special outdoor liturgy. (Photos by Valaurian Waller | Detroit Catholic)

DEARBORN — More than 300 parishioners and students gathered around a makeshift altar built of ice and snow for a unique Mass Sunday night at Divine Child Elementary School.

Temperatures dipped into the single digits, but by shuffling side to side and listening attentively to Fr. David Pellican pray the words of consecration, the faithful had the chance to thank God for all of creation, including the ice and snow that comes in abundance.

The Dearborn parish’s “chapel of divine chill” took its inspiration from a similar project at Michigan Tech University in Houghton, where students and clergy annually construct a chapel of ice and snow during the school’s winter carnival.

It was Monday afternoon, with a snowstorm in the forecast, when Fr. Pellican, associate pastor at Divine Child, began discussing the snow chapel with pastor Fr. Bob McCabe.

“It was Monday night, right before the snowstorm, and Fr. Bob and I got in the work van and drove to Home Depot,” said Fr. Pellican, who happens to know Fr. Tom Merkel, associate pastor of St. Albert the Great University Parish in Houghton, through Sacred Heart Major Seminary. “We built the forms on Tuesday, started work on the chapel itself Wednesday afternoon, and finished it Saturday.”

While getting the wood for the chapel’s frames, Fr. McCabe and Fr. Pellican instructed the grounds crew to plow all the Monday evening snow in the parking lot to a specific corner of the lot, providing up to five feet of snow to serve as a base for the chapel.

Then came the daunting task of recruiting more than 200 Divine Child High School and Elementary School students, who began building, packing and sculpting the snow to make an altar, walls and inlets for statuary and sacred items. The end result was an altar worthy of the Holy Sacrifice of the Mass, adorned with statues of St. Joseph and St. Mary.

“We had up to 200 students volunteer to make this happen; it really is all about the manpower,” Fr. Pellican said. “We let our high schoolers do whatever they wanted for decorations. They came up with the stained glass they built for one of the musicals, so we repurposed that. Other things fell into place.”

Ali Myers, a Divine Child High School senior, spent hours working on the chapel. Like her classmates, she was inspired to build something people would remember for a while. And who doesn’t love playing in the snow?

“One of the things that caught my eye when I saw them post this on the school update page is that it’s like what they did at Michigan Tech,” Myers said. “Tech is one of the schools I was looking at (attending) next year. I’m probably going to Northern, but I really like Tech. I love the snow, and I thought this was a really cool project and something I’d really love to be part of.”

What began as a student project quickly grew as members of the community heard about the snow chapel and wanted to get involved. Fr. Pellican said he was outside admiring the work on Wednesday when a passerby offered 50 candles for the project, which were placed in niches carved into the snow.

“The reaction has been very positive; everyone in the neighborhood is talking about it,” Fr. McCabe said. “People drive by and feel inspired. Someone asked if we needed a large crucifix, and that came (Sunday) morning. We were looking for statuary, and had this one of St. Joseph. Someone overheard our conversation and said, ‘Oh, I have the Blessed Virgin Mother.’ This project has been a combination of faith, prayer and teamwork. The creativity has been a lot of fun. It’s been a blessing.”

Volunteers kept sculpting the altar with car brushes well into Sunday evening, preparing for a 6 p.m. Mass Sunday night. Those working on the chapel weren’t sure what the final product would look like, but were taken aback with the result.

“This is even better than I expected,” Myers said. “I knew at the beginning it was going to be really cool. Every single day we worked on it, it kept getting better and better. This is one of the highlights of my senior year, I think. Who else can say in their high school senior year, they got to build a snow chapel?”

Fr. Pellican said the makeshift chapel is dedicated to St. Joseph the Worker and Our Lady of the Snows, during a homily in which he promised the chilled assembly he “wouldn’t be saving his two-hour homily for this moment.”

In his homily, Fr. Pellican likened the dedication of the snow chapel volunteers to that of the immigrants who scraped what little money they had to build the gorgeous churches that adorn the Archdiocese of Detroit. He also mention St. Francis of Assisi, tasked by Christ to rebuild his Church, both physically and spiritually, just as the ice chapel brought the Divine Child community together for one frigid night.

“One of the things we really saw in this project was it showed people, in no uncertain terms, that there is no opposition between being religious and having a good time,” Fr. Pellican said. “When you are following Jesus, it’s an adventure, and you can have a ton of fun doing it.”