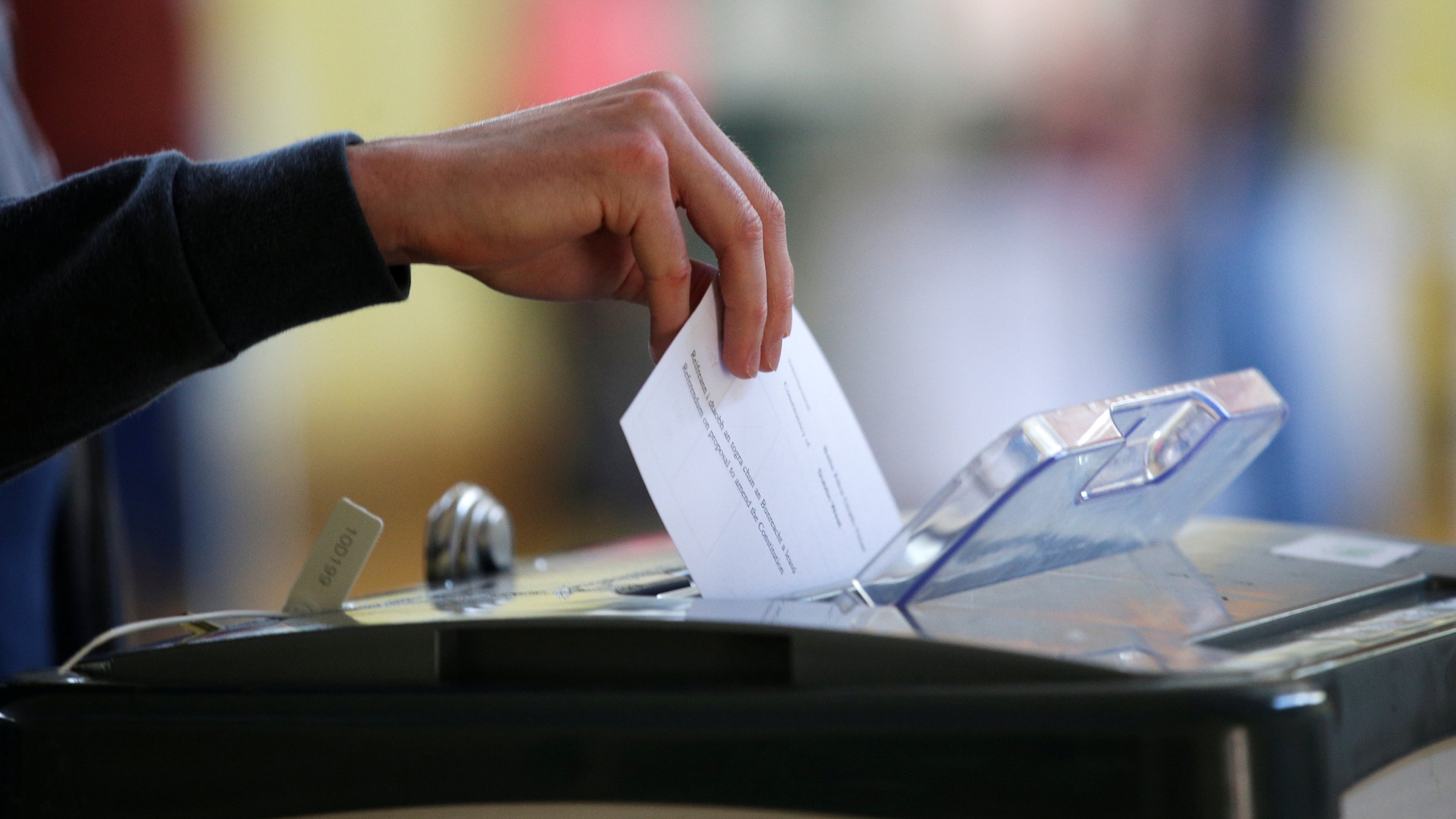 A man places his ballot in a voting machine in this file image. The Michigan Catholic Conference, whose board of directors includes Michigan's seven diocesan bishops, is urging Catholic voters in the state to vote "no" on the state's Proposal 1, which would legalize the recreational use of marijuana, during the Nov. 6 midterm elections. (CNS photo)

LANSING — On Tuesday, Nov. 6, voters will head to the polls for the midterm elections.

In Michigan, the electorate will cast votes for governor, U.S. senator, the state’s 14 congressional representatives, 38 state Senate seats and 110 members of the Michigan House of Representatives.

Voters will also be choosing candidates for the state Supreme Court, local elections and a list of millages.

At the end of the ballots, there are three statewide initiatives for voters to consider.

In August, the Michigan Catholic Conference released its election-themed issue of Focus, the conference’s official newsletter, detailing the issues and values Catholics should consider before heading to the polls.

“Catholics are encouraged to consult candidate websites, speeches and voting records to help inform their voting decisions,” said David Maluchnik, vice president of communications for the Michigan Catholic Conference. “Additional election-related information is available on our website, (www.micatholic.org/election2018), which includes a listing of candidates for various statewide offices, documents and videos related to the election, and background information on all three statewide ballot questions.”

Maluchnik said the MCC's voter guides are based on the United States Conference of Catholic Bishops’ “Forming Consciences for Faithful Citizenship” document, which outlines a series of principles Catholics should consider before voting.

“The document is a helpful resource toward evaluating candidates' positions and weighing them according to their moral importance,” Maluchnik said. “Catholics should also consider the candidates' character, previous actions in office and his or her influence on a particular issue.”

The Michigan Catholic Conference opposes Proposal 1, the statewide ballot initiative that would authorize and legalize possession, recreational use and cultivation of marijuana products by individuals who are at least 21 years of age, and commercial sales of marijuana through state-licensed retailers.

The ballot proposal is the only issue on which the Michigan Catholic Conference is taking a formal position.

According to the October 2018 issue of Focus, the MCC's board of directors, which includes the seven diocesan bishops of the state and is chaired by Detroit Archbishop Allen H. Vigneron, determined the proposal does not promote the common good.

Reviewing the potential pros and cons, the bishops voted unanimously to encourage Catholics to vote “No” on Proposal 1, citing concerns that states that have legalized recreational marijuana have seen higher rates of teen drug use. In addition to those concerns, the bishops noted that the THC levels in marijuana make the brain susceptible to stronger responses to tobacco, alcohol and other drugs, that recreation marijuana is still illegal under federal law, and that it presents a barrier to employment for people, since many companies have zero-tolerance drug policies.

“Before unanimously opposing the measure at its September meeting, the MCC board of directors discerned if the measure would promote the common good and positively influence Michigan children, families, workers, health outcomes and communities,” Maluchnik said. “The board considered arguments from both sides of the issue, reviewed research received advice from other Catholic conferences in states that already have legalized recreational marijuana.”

Regarding the other two ballot measures —  Proposal 2, an independent redistricting commission initiative that would transfer the power to draw the state’s congressional and legislative districts from the state Legislature to an independent redistricting commission; and Proposal 3, which would enshrine straight-ticket voting, automatic voter registration, same-day voter registration and no-excuse absentee voting in the Michigan Constitution — the Michigan Catholic Conference isn’t making a formal endorsement but has prepared literature on the issues with information from supporters and opponents.

Maluchnik said the MCC’s "A Call to Conscience, Faithful Citizenship and the Common Good" campaign is rooted in the idea that Catholics not only have an obligation as citizens to vote, but can use the values of their faith to make positive contributions to the country’s democracy.

“Faithful citizenship refers to the fact that we are both Catholics and citizens in a democratic society; we have rights and duties as both that are complementary, not in conflict with one another,” Maluchnik said. “Catholics bring forward an important voice to the political dialogue, one that is concerned with upholding the life and dignity of all, especially the most vulnerable, in order to promote the common good of society.”

While many look forward to going to the polls Nov. 6, perhaps many more lament the level of discourse and rancor that surrounds contemporary politics. After many months of demonstrations, hostile debates and all together uncivil attitudes, Maluchnik said it is on Catholics to introduce the light of Christ to all debates, recognizing that all citizens, regardless of political party, are children of God.

“Make the discourse you would like to see take place among our elected officials,” Maluchnik said, “keeping in mind that every human person, regardless of their political persuasion, is made in the image and likeness of God.”