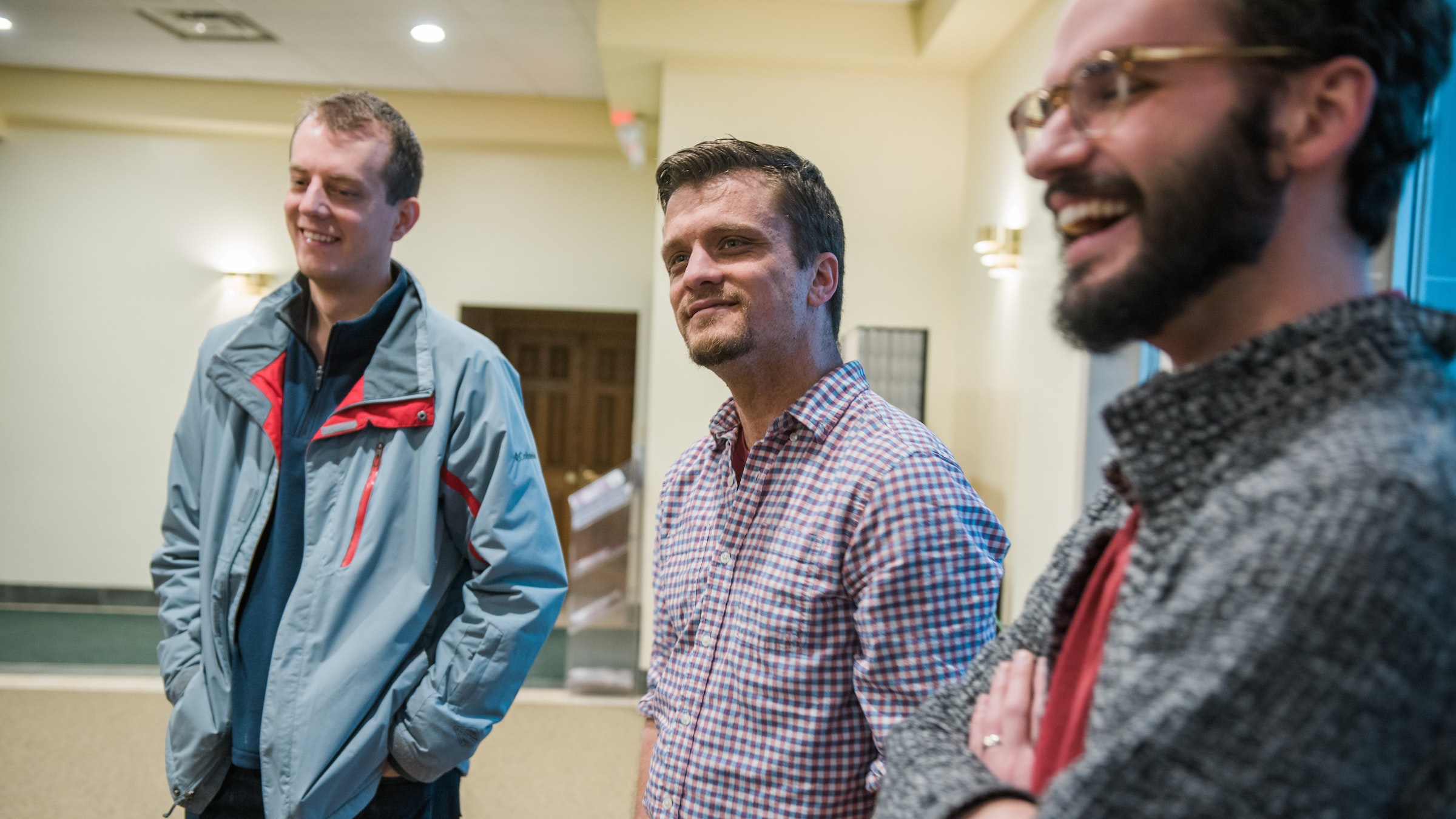 Dan Miller, left, Paul Miller (center, not related) and Giovanni Vitale attend a small group meeting of men participating in the Exodus 90-Day Challenge at Divine Child Parish in Dearborn. Throughout the challenge, the men volunteer to give up daily pleasures for 90 days in order to be more connected to God and to their families, spending more time in prayer, adoration and contemplation. (Photos by Valaurian Waller | Special to Detroit Catholic)

DEARBORN — Cold showers. No social media. No sweets or alcohol. No movies or televised sports.

These are some of the sacrifices being made by a group of 33 men from the Church of the Divine Child in Dearborn.

No, it's not just a Lent thing — although that's part of it. They've been practicing such abstinence since Jan. 21.

The trade-off is worth it to them, having already gained more than they had hoped: a closer relationship with Christ, more quality time with their wives and children, and shared fraternity with other men — to name a few blessings.

The men, ranging in age from 20 to 73, committed to this way of life on a temporary basis by participating in the Exodus 90-Day Challenge, called Exodus 90 for short. Their challenge will be complete on Easter Sunday.

The challenge was developed by Fr. Brian Doerr and seminarians at Mount St. Mary’s Seminary in Emmitsburg, Md., as a way to form young priests who longed to experience “a more perfect personal freedom as they anticipated service in the Church,” according to the Exodus 90 website. The program seeks to provide a path to freedom from distractions of the world in order to focus on God and family.

It was during Advent when Fernando Aceves was inspired to begin the Exodus 90 effort at Divine Child. He and several men from a Dearborn multi-parish men’s group had already begun an Advent exercise of fasting and prayer. At the same time, Divine Child associate pastor Fr. Matthew Hood had taken on Exodus 90 with several priests from the Archdiocese of Detroit to offer penance for the Church.

“I think this is a tremendous resource in terms of gaining freedom from distractions in your life that aren’t necessarily immoral, but take you away from God and family,” Fr. Hood told Detroit Catholic. “It also helps the body of Christ, because just as when one person sins, we’re all affected, when one person grows in virtue, the body does as well.”

Inspired, Aceves thought the time was right to do something big.

“We felt the Holy Spirit has been moving at Divine Child, so I met with (pastor Fr. James Bilot),” Aceves said. “At first, he asked if I thought people were ready for this. But sometimes I think we spoon-feed people, and I believe that men really want to be challenged.”

With the help of Fr. Hood as their spiritual adviser, Aceves and two friends from the parish, Ernesto Bridgnanan and Giovanni Vitale, started to make plans for Exodus 90 and invite others to join them for their January start date — 90 days before Easter.

The 90-day duration of the program isn't arbitrary; it's based on the length of time studies have shown it takes the brain to “reset” itself, breaking bad habits and forming new, positive ones. The same 90-day timeframe is used by many addiction recovery and rehabilitation programs, with the same mentality: once the brain is engaged in a habit for 90 days, it becomes much easier to sustain.

Throughout the challenge, men commit to a practice of daily asceticism and self-mastery, which includes:

Other pillars of the challenge include a commitment to daily prayer and a holy hour (minimum of 20 minutes), and the formation of small groups for men to pray for and support one another.

“I decided to do Exodus 90 and offer it up for the Church, for our wives and families. The old-time principles of mortification and contemplative prayer were appealing,” said Bridgnanan, 33, president of Divine Child’s pastoral council. “Social media is a big one for men my age and younger. We struggle with this, and it takes us away from our families, our friends, our work.”

Like his friend, Aceves was willing to detach, even though it wasn’t easy at first.

“I was heavily on social media before, but now that I’m not, I’ve noticed I’m not comparing myself anymore — there are so many near occasions of sin there in pride and vanity,” Aceves said. “I don’t always want to be thinking about the next big thing; I want to be present to my family.”

The fraternal aspect of Exodus 90 is key. The group of 33 is divided into subgroups of five or six that meet once a week in one another’s homes or at the parish. In addition, each man has an “anchor,” a person in his small group with whom he talks daily to discuss struggles, prayer intentions and other day-to-day matters that go beyond the weekly meetings.

“Especially at the beginning, there are failures, but the others have your back and encourage you. So you keep working on it,” said Vitale, who helped to organize Exodus 90 at Divine Child. “It helps you be accountable to each other.”

Before starting Exodus 90, participants are encouraged to talk to their wives about the impact the challenge will have on their family. Watching TV with the kids and having wine as a couple are just two activities that end when the challenge begins, though there are exceptions.

“Exodus 90 is not supposed to affect your spouse, so if she wants to have a glass of wine for your anniversary, you have a glass of wine,” Bridgnanan said. “If you’re unsure whether you should be making an exception or not, you bring it to your small group to discuss.”

Additional prayer time and weekly meetings, as well as added exercise, take time away from the spouse and family, yet the Divine Child participants interviewed by Detroit Catholic found they had more time for family than before.

“I think this has shed light on how lightly I fasted before during Lent,” Vitale said. “With this, you’re giving up so much that the only thing you can fill it with is God, prayer and family.”

He and his wife are enjoying the extra time together, and their four children enjoy exercising with him. For Bridgnanan and his wife, now instead of watching TV, they play games together or talk. Aceves’ family, who just welcomed a new baby — their third — is also enjoying a more-present husband and father.

Ash Wednesday was the halfway point for the Divine Child Exodus 90 group. On Easter Sunday, they will mark the end of their spiritual exercises.

Exodus 90 participants don’t know what their “new normal” will be after Easter, but they know life will never be the same. Most will incorporate several of the disciplines into their lives, in some form. Bridgnanan says many of them are worth considering in the long term, minus the cold showers.

“I want to have a healthy perspective on these things I’ve gone without — social media or certain food, for example,” Aceves said. “The answer isn’t to delete my social media accounts or go on some crazy diet, but not to be so extreme, and instead to be virtuous and have healthy interactions with those things.”

Fr. Hood, who completed Exodus 90 in December, says that for him, the greatest grace he received from the experience was a reliance on the Lord.

“It’s so easy to get caught up in the pace of the culture. This gives you freedom from that,” Fr. Hood said. “The gift that God wants to give you is that peace.”

To learn more about the Exodus 90-Day Challenge, or to organize a group at your parish, visit Exodus90.com.