Contemplation and companionship: Camp Sancta Maria has been a place to find God for 86 years 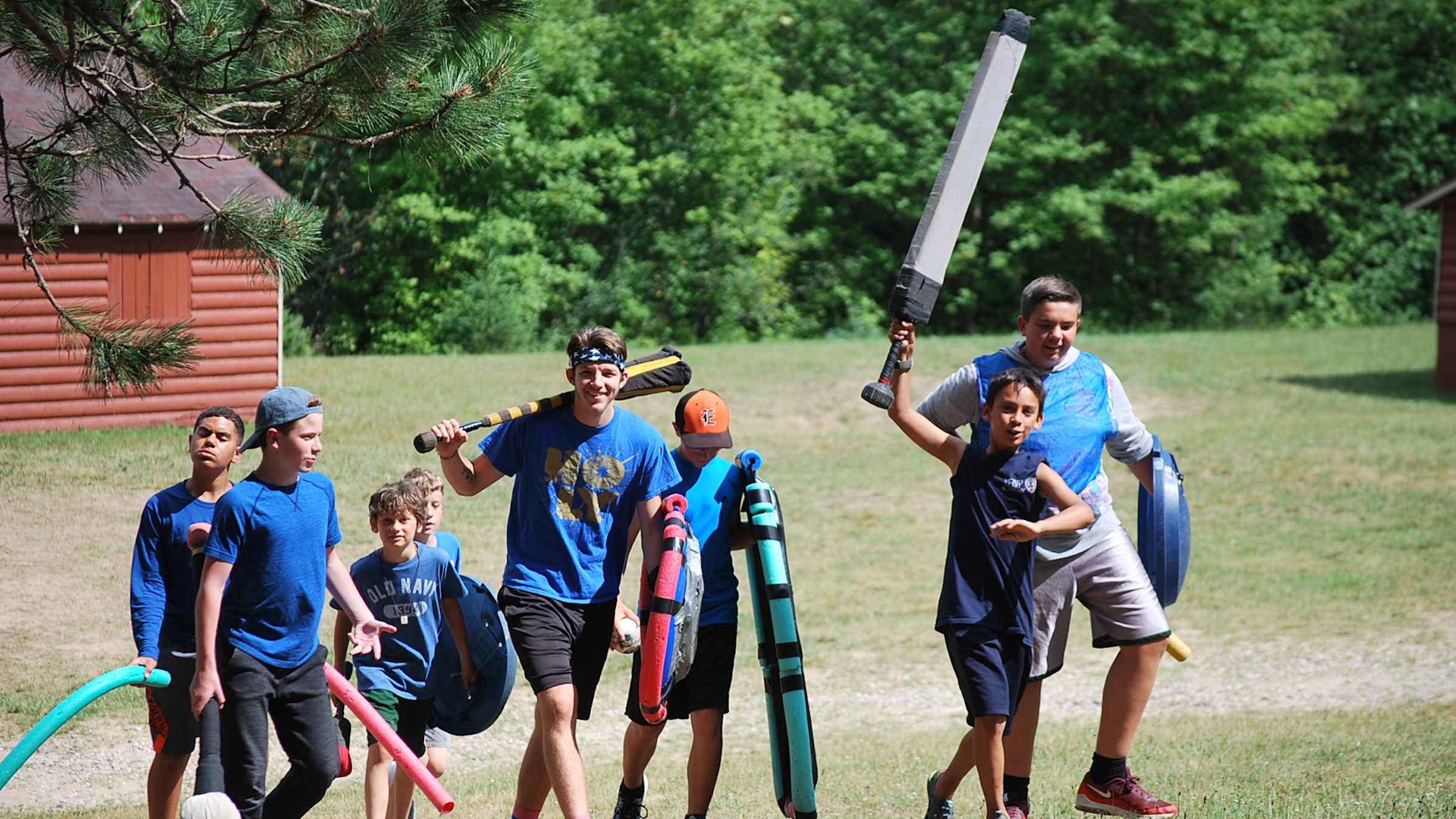 Young men participate in camp activities at Camp Sancta Maria in Gaylord, run with the help of seminarians from Sacred Heart Major Seminary. Since 1933, the northern Michigan retreat has offered young men a chance to experience God through nature, intertwining faith and fun through an atmosphere of mentoring and fellowship. (Courtesy photos)

GAYLORD — Between tagging friends in photos, "checking in" to events and social gatherings online and keeping up with "mentions" on social media, being connected is a full-time job for today's youth.

But often, being connected isn't the same as making a connection.

Luckily, there is a place where young men — and for one week young women — can go to return to God’s country, make new friends and rediscover the Lord's presence in their lives.

Two-hundred and thirty-eight miles north of the hustle and bustle of Metro Detroit is found Camp Sancta Maria, a camp for young men ages 8-16 where young people can put away the cellphones and create a connection that is far greater than any social network.

Since 1933, the summer camp has offered kids and teens a chance to hike, swim, horseback ride, play soccer, basketball, football and just be a kid. The camp operates from mid-June to mid-August, and is staffed by volunteers and paid seasonal counselors.

“Camp Sancta Maria is primarily a boys camp where we end up with between 700 to 800 people who come to camp in different cohorts for a week or two weeks of horseback riding, a ropes course, rock wall climbing and zip line, swimming, archery. It’s your typical summer camp,” said John David Kuhar, executive director of Camp Sancta Maria.

The camp is run by paid seasonal staff and volunteers.

Historically, the camp was staffed by seminarians from Sacred Heart Major Seminary, who got their first taste of pastoral ministry as they helped campers reconnect with God in the woods of northern Michigan.

Anyone can sign up to be a counselor, and those interested can fill out an application on Camp Sancta Maria’s website, Kuhar said. Counselors lead the various programs of the camp, watching over the campers and guiding them through activities, daily Mass and night prayers.

David Pellican, a third-year seminarian for the Archdiocese of Detroit at Sacred Heart, was a counselor at Camp Sancta Maria for three summers, looking after a cabin of 10 to 15 boys at a time.

“Being a counselor teaches you how to be selfless, to look out for others’ needs and put them before your own,” Pellican said. “Fr. Robert Spezia (the camp’s chaplain) told us seminarians to think of our cabin as our parish. You’re there to be a parent to these kids in some ways. They come to you if they need something. It prepares you to be a father to people.”

During Pellican’s time as a counselor, he learned to listen to campers' questions and concerns, taking the time to foster growth as young people looked to him for guidance.

“They aren't always looking for you to have all the answers, but they are looking for you to be there for them,” Pellican said. “So many kids come to camp who may not have great fathers or a great experience with their fathers, so it’s really important for the guys at camp to be good, holy men who show them what that looks like.”

Joseph Terbrack, now a junior at Franciscan University of Steubenville, Ohio, enjoys a good relationship with his father, but said his time as a camper at Camp Sancta Maria brought them even closer together.

“I started going to camp when I was 9 or so, with my dad for father-son weekend, and I instantly fell in love with it,” said Terbrack, who belongs to St. Benedict Parish in Waterford. “The next summer, I went for two weeks, and went every summer up until now, and now I’m 22. Camp started out as a fun place to be, and then it turned into a place where I looked forward to seeing my friends.”

Terbrack remembers attending camp with largely the same cohort each year, allowing the group to grow in friendship.

“As the years went on, camp became a place where I really encountered my faith,” Terbrack said. “I don’t remember a ton of activities I did, but I remember my counselors and the impact they had on me learning how to be a man, how to have fun and how to be a stronger Catholic.

“I could name all my counselors since I was 10,” Terbrack added. “They impacted me so much. As I grew older in discipline and self-control, but mainly in my faith — thinking about having the seminarians up there, Fr. Bob as chaplain up there for 15 years — that is where I went to have an encounter with the Lord.”

More than the games and activities, Camp Sancta Maria’s primary focus is creating a space where young men can truly have an authentic connection with God.

“We unite the spiritual to the physical, the supernatural to the natural,” said Fr. Spezia, who served as chaplain to Camp Sancta Maria from 2000-17 and executive director of the camp from 2013-17. He held both positions until he took on his current role as the Archdiocese of Detroit's vicar for clergy and consecrated life in the middle of 2017.

“There are a lot of camps kids can go to in order to have fun,” Fr. Spezia said. “But what we do is infuse the spiritual life into the fun. When the kids come here, they not only have fun, but they form great relationships that last a long time, and they form this encounter with the risen Christ. Sometimes, it’s the first encounter they have ever known.”

In his role as chaplain, Fr. Spezia celebrated Mass, heard confessions, led retreats and served as a spiritual guide for the counselors and campers alike.

With campers ranging in age from 8 to 16, Fr. Spezia said there is a special dynamic between the older and younger groups.

Fr. Spezia said the counselors are “on” for 23 hours, six days a week — a tremendous commitment that pushes them to be better individuals and spiritual leaders.

He added the environment at Camp Sancta Maria produces a profound experience with God, one he didn’t imagine when he was assigned to the camp in 2000.

“We think technology has united us like never before — and there is some truth to that,” Fr. Spezia said. “But we overlook how technology isolates us like never before. So at the camp, we don’t allow any technology, and what happens is the campers have to communicate face to face. And for many campers, it is a startling and rewarding experience.”

That rewarding experience is something Kuhar said drew him back to the camp, first as a counselor, then an assistant director, and now as the executive director for the past two years.

“The opportunity to have an impact on a kid’s life, to encounter Christ, having daily Mass, night prayers, the opportunity for confession regularly — it’s amazing,” Kuhar said. “Seeing how the Lord works in the campers’ hearts, and being a vessel, an instrument of that encounter, is amazing. It’s a blessing to be in that great mission to provide an opportunity for people to increase their faith and have fun at the same time.”

“As a kid, I knew camp was a place where I encountered true community,” Terbrack said. “I don’t think I was able to articulate it as a kid, but I knew I was home.

“There are places you can work in the summer where you will earn more money — McDonald’s pays better than camp,” Terbrack added. “But if it wasn’t for Camp Sancta Maria, I wouldn't be the person I am today. And I’m grateful for every summer I had a chance to be there, to be connected to God.”

To register for summer camp at Camp Sancta Maria, or to learn more, visit campsanctamaria.aod.org.