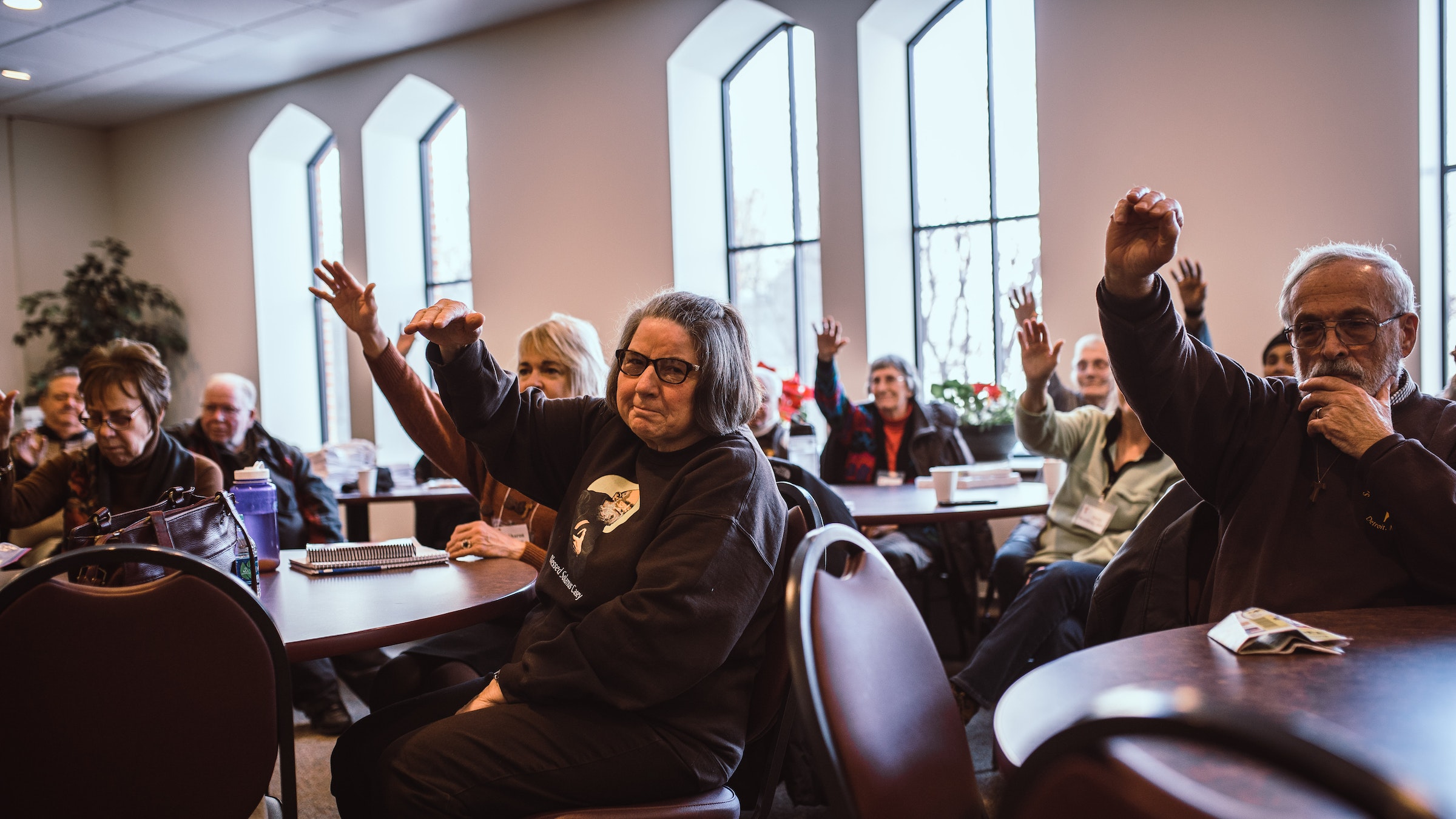 Members of the Third Order of St. Francis — also known as Secular Franciscans — pray during a monthly meeting at the Solanus Casey Center in Detroit. Along with the fraternity that meets at the center, Secular Franciscans also gather at the Church of the Transfiguration in Southfield. (Photos by Valaurian Waller | Special to Detroit Catholic)

Peace and justice, care for creation among charisms for members of Third Order of St. Francis in Metro Detroit

This article is the third in a four-part series about lay spirituality and third orders in the Archdiocese of Detroit. To learn more about a particular charism, email the contact included in the story. See previous articles on the Benedictine Oblates and Lay Dominicans.

DETROIT — St. Francis of Assisi had a famous saying about rewards.

“Men lose all the material things they leave behind them in this world, but they carry with them the reward of their charity and the alms they give,” the great saint is known to have said. “For these, they will receive from the Lord the reward and recompense they deserve.”

St. Francis inspired many by his care for the poor and the ill (including lepers), his love for nature and his eloquent preaching. He established three types of orders for those who wanted to follow him: The First Order is composed of priests and lay brothers who have sworn to lead a life of prayer, preaching and penance. The Second Order is composed of religious sisters (also known as the Poor Clares).

Because many married people also wanted to follow St. Francis’ example, he created the Third Order as a means to follow the Franciscan spirit while still living “in the world.” In 1978, it was reorganized and given a new rule of life by Pope St. Paul VI and renamed the Secular Franciscan Order. As of 2016, there were more than 12,000 Secular Franciscans in the United States.

Among these is Susan Hayosh, who is a member of the St. Elizabeth Fraternity, Secular Franciscan Order, which meets at the Church of the Transfiguration in Southfield. Hayosh said she was introduced to Franciscan spirituality in part by her cousin who was a Franciscan priest. However, it was through her experiences at a liturgical movement retreat at Duns Scotus that she was inspired to live the spirituality more deeply.

“Through that retreat, I became aware of the Franciscan Outreach Program,” Hayosh said. After working with the program, which distributes food to needy families, Hayosh decided, “This is what I dream of doing.”

Hayosh said she was attracted by the Franciscan emphasis on living the Gospel.

“We strive to create peace in a world that is hungry for it,” she said. “The food we can give is not the food of the world. We fill ourselves with the Gospel and give our excess to others. It’s not an easy task.”

The lay followers of St. Francis were advised by him to dedicate themselves to a life of penance and simple living right in their homes and places of work.

Hayosh spoke of the day-to-day challenges of living peacefully with others — including family members, coworkers and strangers.

“We are called to constantly be in conversion (and to follow Christ),” Hayosh said. “It has to be a moment-by-moment decision.”

The process of becoming a professed Secular Franciscan has three separate stages:

At the end of the formation process, Secular Franciscans make permanent promises to observe poverty, chastity, obedience, and to live the Gospel according to their state in life. They are allowed to marry, hold jobs and raise children.

Secular Franciscans generally meet once a month for prayer, fellowship and study of the Franciscan rule and its application to daily life. They are encouraged to participate in apostolates that respect family, peace and justice, and God’s creation as their work and family commitments allow.

“It’s not a social club,” said Eileen Smith, minister of the Secular Franciscan fraternity at the Solanus Casey Center in Detroit. “If you are selfish, if you can’t listen or be present to others, then perhaps this order isn’t for you. It’s important to be present, hearing what others have to say.”

Smith equates her role as minister to that of a servant-leader. Essentially, she is the president of the fraternity, ensuring its members are following the order’s constitution, while monitoring the fraternity’s finances. Smith said she and her fellow fraternity members thrive on the many activities in which they participate, such as working at the Capuchin Soup Kitchen and organizing weekly healing services at the Solanus Center.

“God loves us so much that He wanted to enter into our creation,” Smith said. “I can relate to that. God emptied himself completely. St. Francis was the same. He felt that everybody belonged, even the challenging people. He just found God in everyone.”

To show their membership, Secular Franciscans wear the Tau cross. The cross — which looks like a stylized letter “T” — was venerated by St. Francis as a reminder of Christ’s crucifixion and as a reference to Ezekiel 9:4, “Pass through the city (Jerusalem) and mark a Tau on the foreheads of those who moan and groan over all the abominations that are practiced within it.” The Tau may also refer to the Antonine order, whose members cared for the sick during St. Francis’ time and who also wore Tau crosses.

The main role of the Secular Franciscan is to live the Gospel in the world — to strengthen and support one another by their community and prayer lives, to follow their Rule of Life, and to contemplate the Gospel. By doing so, they can bring the Gospel to others through seemingly mundane day-to-day life.

“The world is broken,” Hayosh said. “There has to be a metanoia (a change in one's way of life resulting from penitence or spiritual conversion).”

The Secular Franciscans meet at the Church of the Transfiguration, 25225 Code Rd., Southfield, MI, on the third Sunday of each month immediately following the noon Mass. For more information, contact Susan Hayosh at (586) 790-6066.

Another Secular Franciscan fraternity meets at the Solanus Casey Center, 1780 Mt. Elliott St., Detroit on the third Sunday of the month. There are two orientation sessions planned for prospective members: one on April 28 and the other on Sept. 15. For more information, contact Eileen Smith at (313) 574-4682.