Deacon Kevin Breen, a servant leader and champion of the diaconate, dies at 62 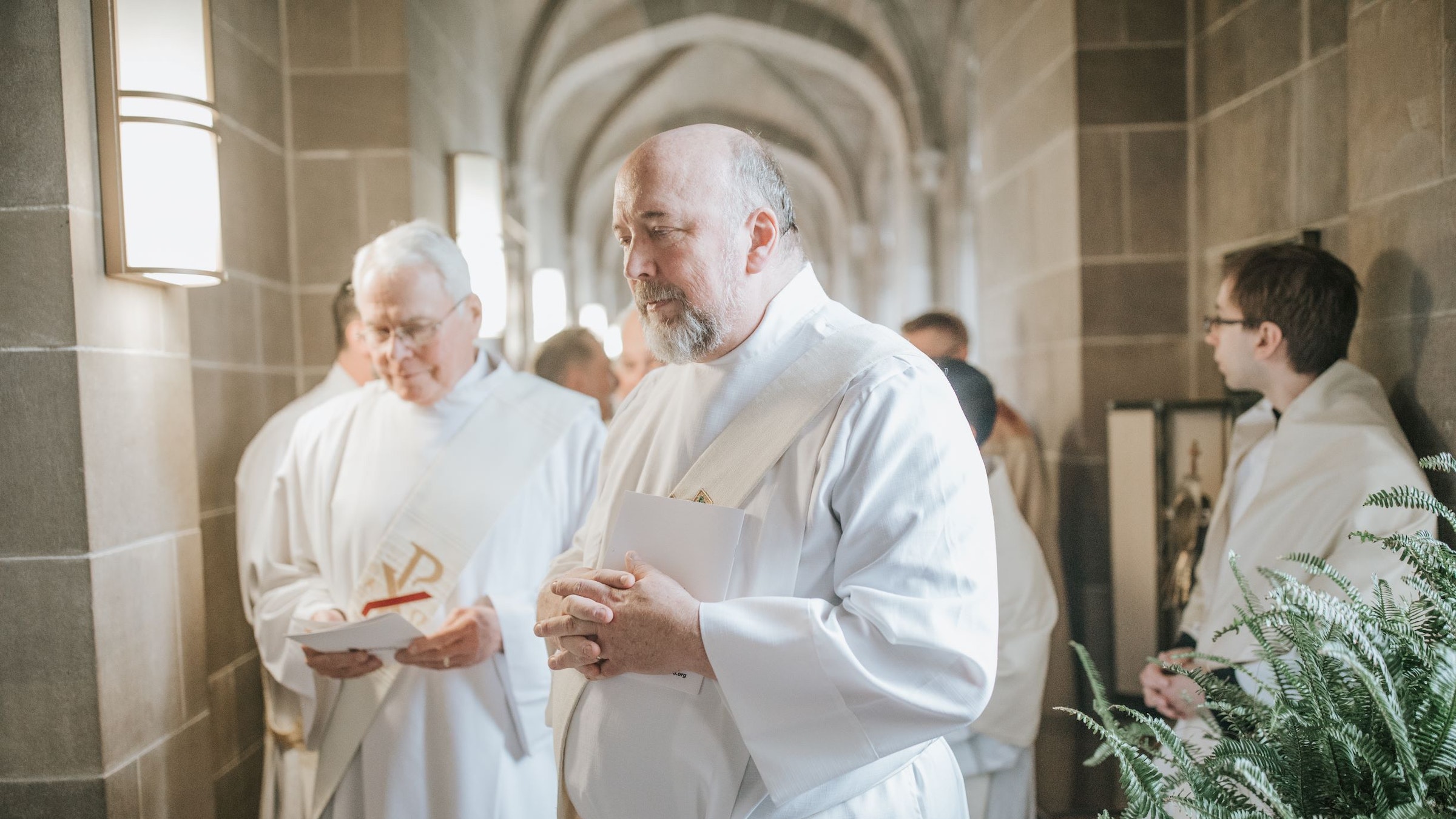 Deacon Kevin Breen, since 2013 the Archdiocese of Detroit’s associate director of permanent deacons, is pictured during the Chrism Mass at the Cathedral of the Most Blessed Sacrament in Detroit in 2019. Deacon Breen's heart for service was felt throughout the archdiocese, say Chancery and parish co-workers who knew him best. (Naomi Vrazo | Detroit Catholic)

Archdiocese’s associate director of deacons was a quiet, compassionate voice and a ‘rock’ for the local Church’s permanent deacons

LIVONIA — Deacon Kevin Breen left an impact on everyone he met, and his caring heart and passion for the Lord were unmistakable.

Bringing a calm, subtle demeanor to his work at the archdiocesan Chancery and his diaconate duties at St. Genevieve-St. Maurice Parish in Livonia, Deacon Breen walked with the Lord and invited others along in the journey.

Deacon Breen died Jan. 22 after a bout with multiple system atrophy (MSA). He was 62.

Kevin Breen was born on Dec. 27, 1958, and ordained a permanent deacon for the Archdiocese of Detroit on Oct. 2, 2004. Deacon Breen served at St. Genevieve Parish in Livonia from 2004-2012, when the parish clustered and eventually merged with St. Maurice Parish to form St. Genevieve-St. Maurice Parish.

Fr. Howard Vogan, the now-retired former pastor of St. Genevieve-St. Maurice, recalled the steadfast dedication Deacon Breen had for the diaconate, assisting in celebrating the Mass and sacraments with a sincere reverence.

“Working with Kevin, it was very easy to see how the Lord was with him as he strove in his personal life, his family life as a husband and dad,” Fr. Vogan told Detroit Catholic. “And when he went downtown to work with the archdiocese, how he sacrificed to make the lives of everyone around him holy.”

Fr. Vogan said the word “sacrifice,” which has Latin roots meaning “to make holy,” describes Deacon Breen’s service to the Church and people. Fr. Vogan said the manner in which Deacon Breen carried out his diaconate duties with a servant’s heart edified everyone he came across in ministry.

Deacon Breen was full time at the parish until 2013, when he took over as associate director of deacons in the archdiocese’s Office for Clergy and Consecrated Life in the downtown archdiocesan office, but still continued to assist Fr. Vogan with Mass at St. Genevieve-St. Maurice.

“He would be there to be the deacon at Mass almost every weekend,” Fr. Vogan said. “He baptized, preached well, did wake services at the funeral homes. He and I would go out together in a nursing home or a private home to celebrate the sacrament of anointing, and whenever I needed someone to come with me, he would drop everything he was doing, and he and I went.”

It was that dedication the led Deacon Breen to accept his appointment as associate director of deacons for the archdiocese, a role in which he encouraged other men to discern their vocation to the diaconate while being a living example of what a servant-leader in the Church looks like.

“Deacon Breen was first a servant, even before he was a deacon,” Fr. Robert Spezia, vicar for clergy and director of the Office of Clergy and Consecrated Life, told Detroit Catholic. “Service was imprinted on his very being, his temperament. He worked in the health care industry before he was a deacon, and the way he carried himself spoke to his desire to care for others; that’s what he did for others.”

Deacon Breen not only recruited potential candidates to the diaconate, but accompanied the men who were serving at the Lord’s altar, walking with them through the trials and tribulations that come with service in God’s Church.

His large stature, towering over just about everyone in the Chancery building, was matched by his big heart for service, including volunteering his time with St. Aloysius Neighborhood Services’ backpack ministry to the homeless in downtown Detroit.

“Deacon Breen had this steadiness; he was a rock, a rock with a capital ‘R,’” Fr. Spezia said. “He was very steady, very present, there was a stability he brought. He was a man of stature, a big man, but a steadiness to match that. He enjoyed quips and jokes. He was very friendly and easy to be around; he made you comfortable.”

Erin Dewimille, who works as an administrative assistant for the diaconate office and spent many days in the office next to Deacon Breen, said Deacon Breen’s presence kept the team rooted in prayer and discipleship — along with friendly comradery surrounding Deacon Breen’s weekend grilling exploits.

“Every single day he was the most peaceful, most humble person,” Dewimille said. “I would come in and sometimes, having a rough drive in, talking to him after a couple of minutes in the morning, him poking his head over the cubicle, asking how my morning was. He had a very calming presence and was very funny. He would crack these jokes in his quiet way. He was such a rock in our office.”

Dewimille recalled how Deacon Breen worked with deacons going through a difficult situation in their parish or their personal lives, turning moments of frustration and difficulties into opportunities for learning and grace.

That grace came from a life rooted in prayer, and influence in the Clergy and Consecrated Life Office that continues because of Deacon Breen’s influence.

“He was the one who encouraged us to pray every single morning,” Dewimille said. “It’s a tradition we have carried on now because of him. I remembered when I started working here almost five years ago, he was the one who stopped meetings and said we first needed to pray. On days he wasn’t in the office, he would text us, making sure we still prayed. He came in the next day saying, ‘Now, you guys better have prayed.’”

Those who knew Deacon Breen would understand why he made sure his team prayed, even on days when he wasn’t in the office. Deacon Breen had a knack for being there when he was needed, especially when it came to his fellow deacons.

The two developed a lasting friendship rooted in the Lord and service in his Church.

“He had a unique gift of being very intelligent, but he had a keen sense of humility that enabled him to inspire other deacons to reach their full potential as ministers of charity,” Deacon Gemellaro said. “Deacon Kevin Breen modeled what it meant to be a minister of charity, in service to the people of Detroit and all people of God. He modeled what it meant to be a servant.”

Shortly after the two met, Deacons Gemellaro and Breen formed what Deacon Gemellaro called a “trusting relationship,” where the two could share just about anything when it came to life, family, the Church and service.

It was these qualities that Deacon Breen honed on the archdiocese’s deacon formation team shortly after his own ordination and later carried with him to his job in the Chancery.

“He could walk with anyone and help them face the challenges in ministry without being judgmental because he understood the challenges of ministry,” Deacon Gemellaro said. “That is what made him such a fine leader. He could help others reach their full potential. And he did this in a way you could only do by modeling and not by teaching. If Kevin had the knack for teaching, he taught by his example.”

Deacon Breen is survived by his wife of 37 years, Sheila; children Patty Breen, Tim Breen and Annie (David) Schunior; grandchild, Xavier; and siblings, Bob and Sheila. He was predeceased by his siblings, Mary Anne and Carolyn.

Deacon Breen’s funeral is Wednesday, Jan 27, at St. Genevieve-St. Maurice Parish. It will be livestreamed at 11 a.m.

The many friends and family who knew Deacon Breen say the greatest gift they received from him was his friendship, guidance and love.

“The greatest benefit of our friendship was the spirit of trust, where we could always trust one another to be frank, honest and with one another, but in a way for the common good of our ministry,” Deacon Gemellaro said. “We had each other’s back; he had everyone’s back. He taught us how to be servants of charity. He had this quiet, trusting demeanor, a presence, that was very blunt, very frank, but was so non-judgmental and filled with unconditional love.

“He will be missed,” Deacon Gemellaro added, “but his spirit will live on in all the lives he’s touched.”