Despite loss, Lewis excited about changing the football culture at U of D Jesuit 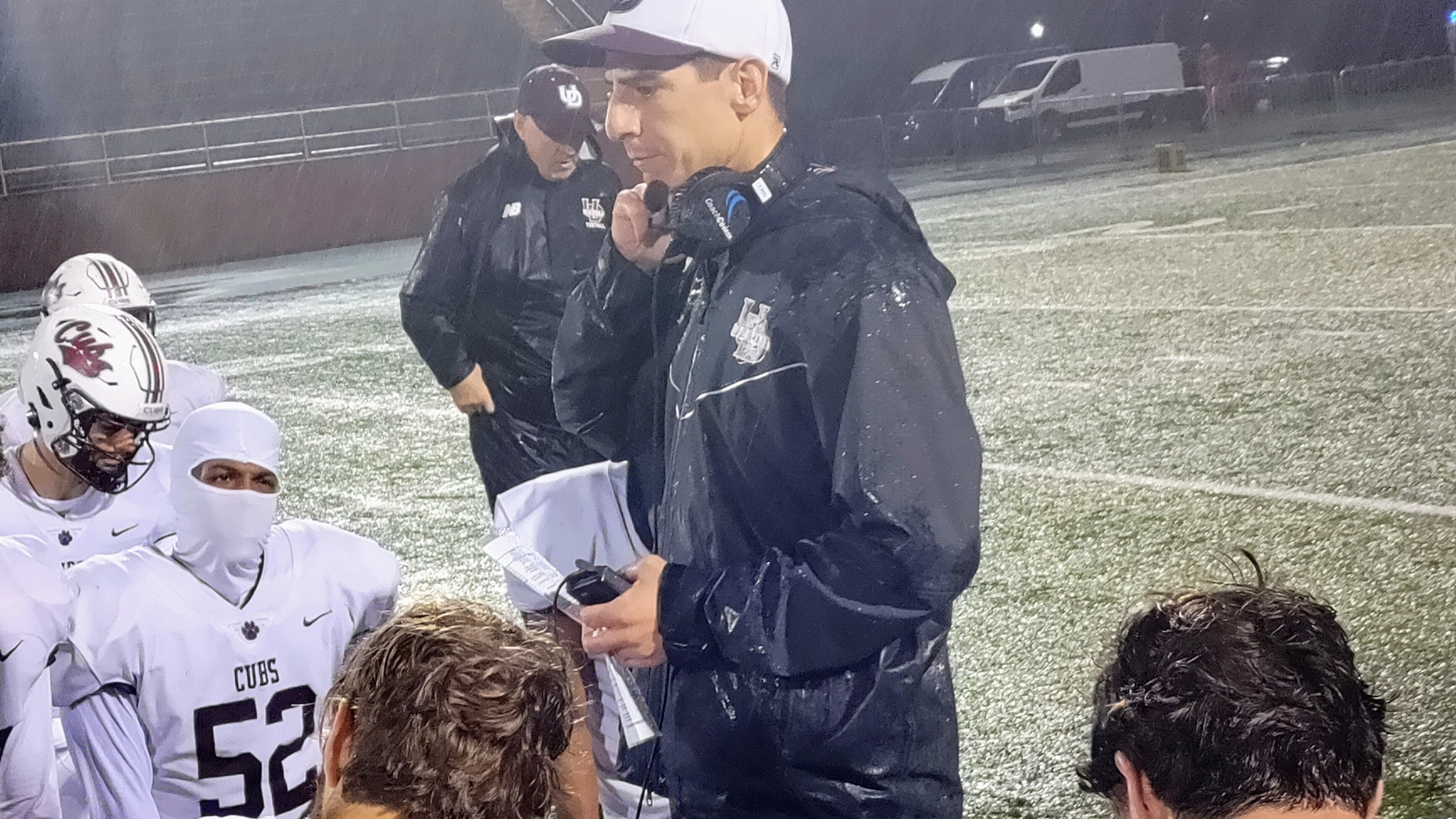 University of Detroit Jesuit football coach Matt Lewis has compiled a 19-20 record in four years. “Changing the culture at U-D is something I’d like to do. We’ve taken some very good steps,” he said. (Photos by Don Horkey | Special to Detroit Catholic)

DETROIT — They trudged off the gridiron, soaked through and through, muddied, some wearing visible bruises from the beating they had just endured.

For the third time in four weeks, the Cubs of University of Detroit Jesuit had been thoroughly trounced by Warren De La Salle. This time, on Oct. 29, by a score of 44-0 in the opening round of the Michigan High School Athletic Association’s football playoffs.

The playing conditions at Wayne State University’s Adams Field, the Pilots’ home field, were miserable. A daylong and game-long rain and wind left puddles of water here and there on the artificial turf. The 300 or so spectators who ventured forth shivered under umbrellas and lap blankets.

And two weeks before that, the first act in this football carnage was a regular season non-league contest in which De La Salle pounded U of D 44-7, neither side not realizing they’d be squaring off against one another a couple more times.

Yet, the Cubs exhibited no doom and gloom after the third whipping. There were smiles, laughing, pats on the back, hugs. They had survived and had fun doing so. 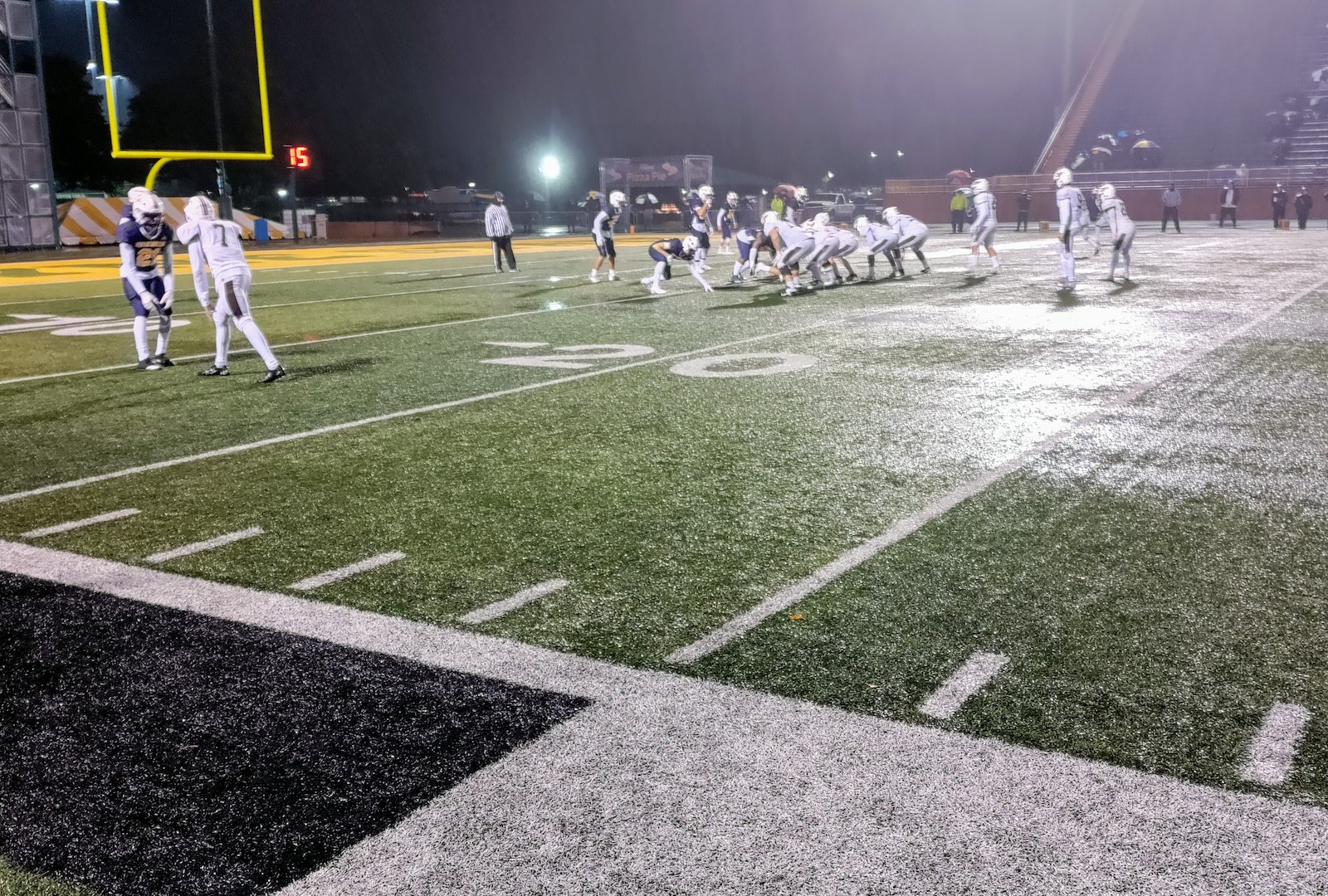 A game-long rain and wind combined to make miserable playing conditions when De La Salle and University of Detroit Jesuit met on the gridiron for the third time in four weeks. The No. 1-ranked Pilots scored early and often for a 44-0 victory. “It was the worst case scenario for us,” said U of D coach Matt Lewis.

“We knew what we were up against,” said coach Matt Lewis. “We knew it’d be a tough challenge. It wasn’t ‘Woe is us.’ We had an opportunity to be in the (state) playoffs, which historically hasn’t happened that much at U-D. We were excited for another chance to compete, another week to play some football. The kids were great at practice all week.”

Two minutes hadn’t elapsed before the Cubs found themselves in a 14-0 hole, one of their own creation: a fumbled opening kickoff and a pick-six interception.

“There were no secrets,” Lewis said. “We looked at the film and tweaked some things where we thought we could take advantage of some of the things they do on offense and defense. The game got out of hand so quickly we didn’t have a chance to do some of the things we practiced. It was the worst case scenario for us.”

Lewis is well-acquainted with De La Salle. He is a 2004 graduate. He quarterbacked the Pilots his junior and senior years, guiding the Pilots to a state district title in 2003.

After graduating from Michigan, he returned to De La Salle as an assistant coach to Paul Verska for seven years. He was the offensive coordinator when De La Salle thrashed Muskegon Mona Shores, 44-8, for the Division 2 state championship.

At 36, Lewis is the youngest head coach in the Catholic League. He was an assistant at Saline for two years before taking the head coaching reins at U of D in 2018.

“There are a lot of parallels between when I started at U of D and Verska started at DLS,” Lewis said. “He changed the culture there.”

Before Verska arrived in 2002 at De La Salle, the program had just two playoff appearances and one playoff win to its name. By the time he left 14 years later, the Pilots had made 11 state playoff appearances, reaching the state finals in 2006 and 2008, winning it all in 2014.

“Changing the culture at U of D is something I’d like to do,” Lewis said. “We’ve taken some very good steps. My first year we weren’t very good (4-5). My second year in 2019 we went to the state regional final and lost Detroit Martin Luther King.”

U of D’s 8-4 record also included winning the AA Division and the Prep Bowl.

“Last year (3-5) was a mess with COVID and everything,” he said. One of the victories was a district playoff win over Grosse Pointe North. “This year (4-6) we made a lot of progress in a year that was trying on many levels. But I feel we are changing the culture.” 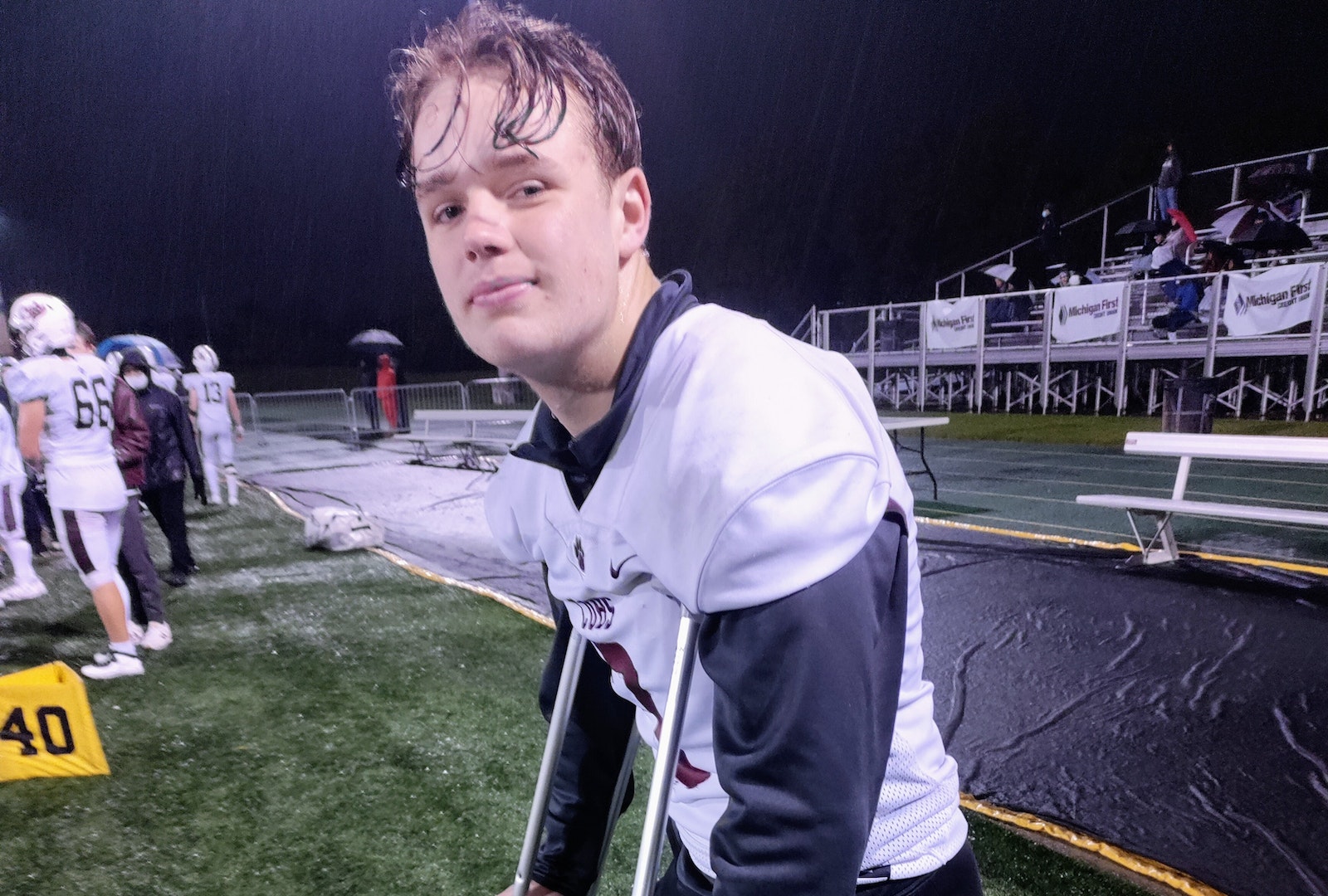 An ankle injury prevented U of D sophomore Magnuson Lott from playing, but his sentiments reflected the team’s attitude: “If we lose by 50 or by a touchdown you want it to be something that you will remember. I don’t mind losing as long as I gave 100 percent,” he said.

About the future, “I’m excited about the young guys coming up,” Lewis said. “There were games where we had four or five freshmen starting. Lineman Zach Green and linebacker Kasim Gozic were All Catholic selections. On defense, we started one senior and nine underclassmen. Most of the whole defense will be coming back next year.”

Lewis spotlighted Green. “He’s a 6-foot-3, 220-pound freshman, a three-sport guy who wrestles and throws the discus for the track team. He asserted himself as one of the better players on our defense, a true football player. “We coached his brother when we were at DLS, and his father went to De La Salle. We were lucky to get him to come to U of D.”

Lewis will be seeking someone to succeed quarterback Nathan Brown. “He was a three-year starter. As a sophomore he led us to the regional final. Last year he was hurt early in the year; he broke his collarbone. Nate had a really good senior year. We went through a lot together. He has offers from Butler and Saginaw Valley, and there are walk-on opportunities. He’s a high academic kid.”

Lewis continued: “I’m hoping to turn the corner. We won games people expected us to win. We have to get to the point where we win games people don’t expect us to win. That’s the next step for us.”

But next for Lewis is a pending change in his family’s culture. His wife Courtney is due next month to deliver their third child to add to their roster of a 5-year-old son and 2-year-old daughter.