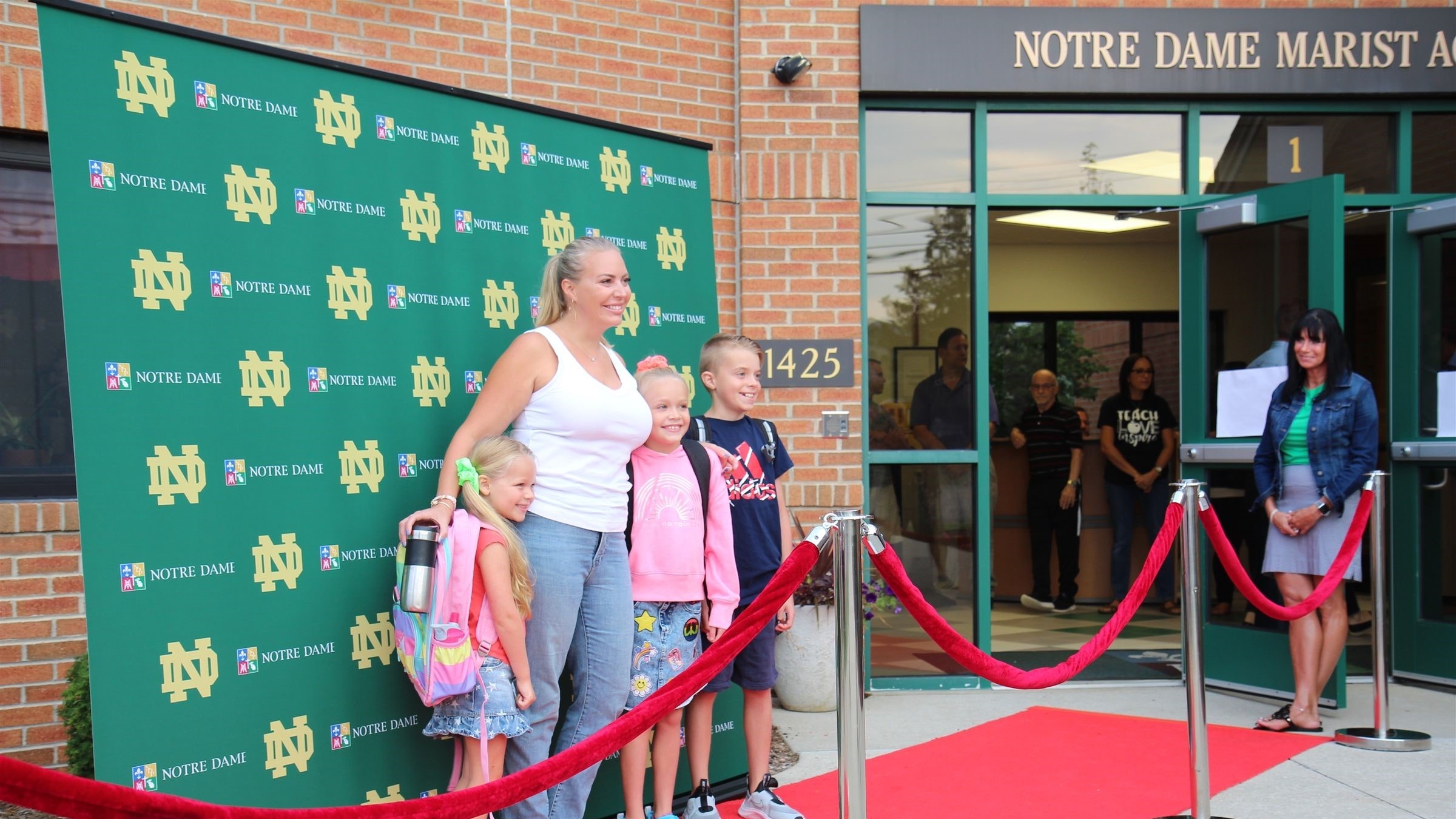 Notre Dame Preparatory School and Marist Academy in Pontiac rolls out the “red carpet” for students returning to classes on Aug. 18 at its lower school division. While the Archdiocese of Detroit is not mandating masks or vaccines — though both are encouraged — the Oakland County school is one of dozens in the county affected by the local health department’s Aug. 24 order mandating masks be worn indoors. (Courtesy of Notre Dame Preparatory and Marist Academy)

DETROIT — As Catholic schools in the Archdiocese of Detroit begin the 2021-22 academic year, the first days are marked with more than just the regular excitement of students being reunited with friends and beloved teachers in the hallways, the thrill of new school supplies and the anticipation of beloved events like school plays and homecoming dances.

This year, the theme is one of hope and cautious optimism.

“The kids were excited to be here and back to what they considered normal. It was an exciting, great day,” David Evans, principal of Cardinal Mooney Catholic High School in Marine City, said of the first day back Monday, Aug. 23. “I pray nightly that we don’t have to return to the way things were, but we are ready to pivot if we need to.”

Across the Archdiocese of Detroit, principals and educators are expressing a similar sentiment, one of hopeful enthusiasm, even as the highly contagious COVID-19 delta variant threatens to upend life once again.

As it did last year, the Archdiocese of Detroit issued a health and safety guide for archdiocesan schools, encouraging in-person education even as schools continue to keep extra sanitizing measures in place such as state-of-the-art air filtration systems, hand sanitizer stations and outdoor activities as much as possible.

The archdiocese’s guidelines, recommended by a school-based task force led by Vic Michaels, assistant superintendent of student services and athletics, recommends indoor masking for all students, faculty, staff and visitors — while leaving decisions up to each school’s discretion.

Vaccines also aren’t mandated, though strongly encouraged as “an act of love of our neighbor and part of our moral responsibility for the common good.”

While the archdiocese itself isn’t issuing mandates, Michaels emphasized that schools are required to follow local and state ordinances — which, he admitted, are changing by the day.

On Aug. 24, Oakland County became the first county in the Archdiocese of Detroit to mandate mask-wearing for K-12 schools — a decision that will impact private schools as well as public schools. Catholic schools in Oakland County are legally required to comply with the order.

“The return-to-school task force felt that because of the wide range of school communities in the Archdiocese of Detroit and wide range of enrollment numbers and locations with various community positivity rates and vaccine rates, we didn’t feel that we could mandate that all of them mask,” Michaels told Detroit Catholic, while emphasizing that Oakland County’s mandate still legally applies to Catholic schools.

“We felt the best thing we could do is require that they encourage masks but not mandate,” Michaels added. “There is just such a variance in our school communities. For example, our high schools have the ability to be vaccinated, where our K through sixth schools don’t have that opportunity.”

Prior to Oakland County’s mandate on Aug. 24, Michaels said 14 elementary schools and two high schools within the archdiocese had decided to be fully masked.

At St. Patrick School in White Lake, principal Jeremy Clark said when students return to class on Aug. 30, they’ll be met with some changes and adjustments.

“We go by what the Oakland County Health Department and the Archdiocese of Detroit says, and I think there’s already been some changes as far as dividers and spacing,” Clark said. “We’ve learned a lot over the past year and a half about how this spreads and the measures we can take to be preventative.”

While that may change now, Clark said a big emphasis will be on working with parents to ensure kids practice good hygiene, stay home when they’re sick, and take care of themselves.

“We’re going to put a lot back on the parents, making sure we’re not sending kids to school sick,” Clark said. “Making sure they’re partnering with us on proper hand-washing, proper hygiene, making sure they’re taking their vitamins and getting exercise, because Vitamin D and exercise are a great way to fight off illness as well.”

Clark added the school has purchased H13 medical-grade air filters for every classroom, and is taking other measures to ensure kids and teachers stay healthy.

“For the warmer months, we’ll open windows. We have tents we purchased last year for outdoor classes, and a lot of teachers made use of that last year,” Clark said. “I think there’s a lot of different measures you can take.”

“Our teachers are taking it seriously,” Clark added.

The school is planning on bringing back some traditions, he said, such as an inter-grade “buddy” system, in which older students work with their younger counterparts, including “church buddies” and “prayer buddies.”

“Last year, we couldn’t have ‘buddies.’ We usually have our eighth-graders and first graders partner up,” Clark said. “We would like to be able to bring that back.”

For Cardinal Mooney, a return to normal means Masses will once again be held in the church next door and not in the gym. Sporting events will also now allow for more spectators.

For now, while sanitizing stations are still in place, students are no longer greeted by temperature check kiosks and divided hallways when they walk into the school, Evans said.

“All of that has been stored because we are going to be optimistic that we don’t have to have it although it is readily available,” Evans said.

At Austin Catholic High School in Chesterfield Township, principal Janel Coppens said while the school is facing challenges because of a statewide teacher shortage, they are excited to be able to maintain some sense of normalcy for their students.

“We are looking forward to getting back to as normal as possible, and hopefully the return of some of (the students’) favorite events,” Coppens said. “One of the core values of our small school is unity. We do a lot of community-building events, and we are looking forward to having some of that stuff back that makes us who we are.”